In need of funding for a creative research project? Well, a new Georgia Tech-backed crowdfunding website may be just the resource you’re looking for. 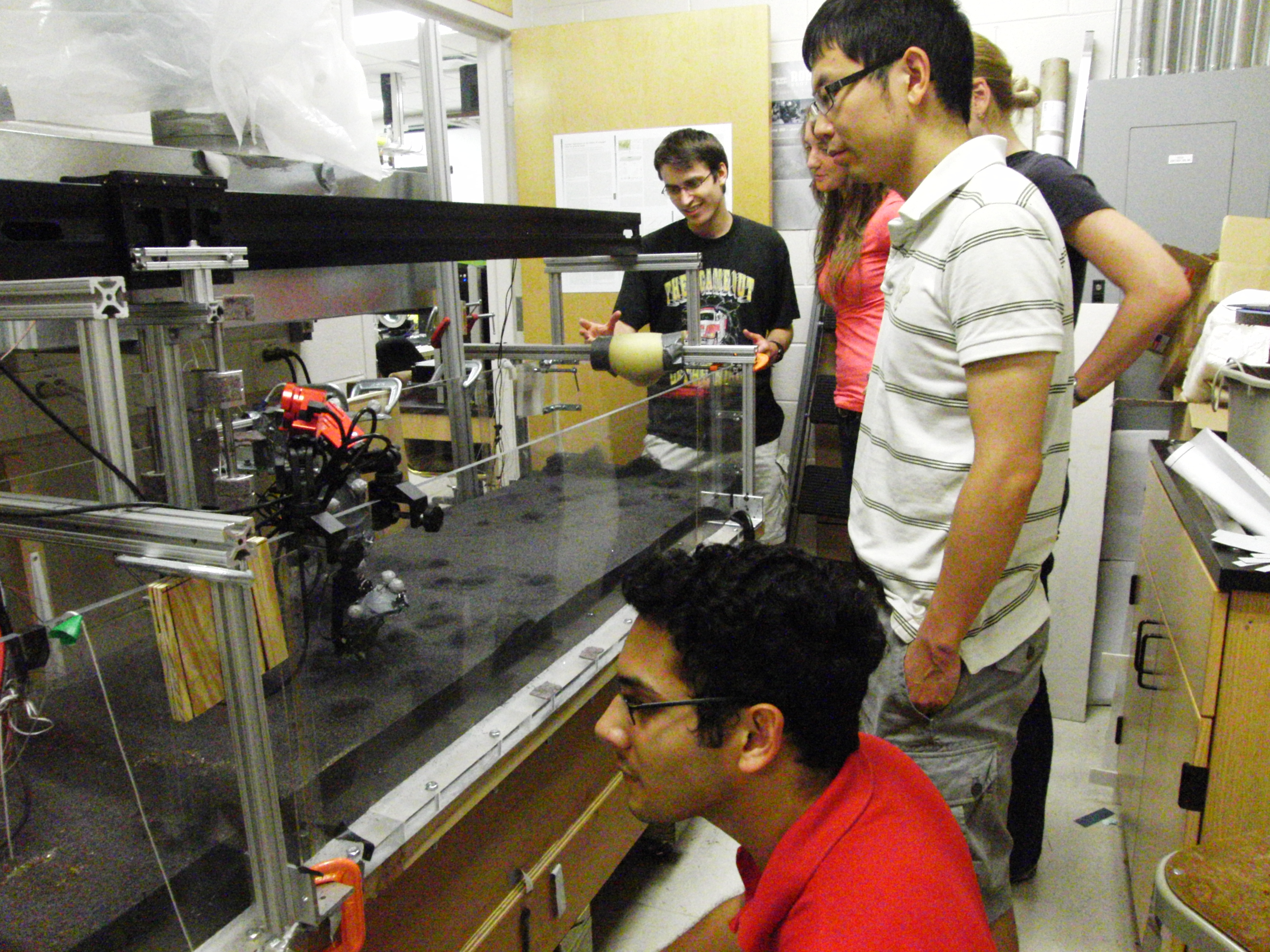 Mark Kingsbury (back) works with fellow researchers on the Robosaur in the Complex Rheology and Biomechanics Lab.

In need of funding for a creative research project? Well, a new Georgia Tech-backed crowdfunding website may be just the resource you’re looking for.

Georgia Tech Starter is the world’s first peer-reviewed, university-based crowdfunding platform for science and engineering projects. Only members of the Tech community can post projects to the site.

“The success of projects on other popular crowdfunding sites is roughly 43 percent, which is much better than the odds on receiving funding from more conventional funding sources,” said Allison Mercer, the Georgia Tech Research Institute researcher who founded the site. “And Georgia Tech Starter can help support projects in ways other than monetarily. Supporters who don’t donate can instead spread the word about projects via social media sites, which can lead to more exposure and funding.”

Read on to learn about three of the six projects currently on the site.

BioBots
Casey Haynes, a biomedical engineering major, is only in her second year at Tech but is already representing the Institute on a worldwide scale.

She’s part of a seven-person undergraduate team that participated in the iGem (International Genetically Engineered Machine) world jamboree, an annual competition held at the Massachusetts Institute of Technology.

Expressing integrins on bacterial cells can have other applications such as localized drug delivery and the detection of cancer cells, she added.

The Tech Starter funding will most likely cover next year’s iGem registration fee and travel expenses.

Antibiotics and Algae
Troy Alexander, a doctoral candidate, works as a researcher in School of Biology Professor Julia Kubanek’s group. His project, “Accelerating the Discovery of Antibiotics from Algae,” seeks to accelerate the discovery of new medicines for the treatment of infectious diseases from Fijian red algae.

According to the Tech Starter site description, “This project represents the first step in discovering new compounds with medicinal properties. Future work, potentially partnering with collaborators and pharmaceutical companies, would facilitate taking medicinal compounds toward commercialization and clinical use.”

“The amount we seek to raise [$9,450] is large enough to make an impact on our research, but it’s not so large to sound insurmountable to donors,” Alexander said.

Contributions will fund analysis of a large number of samples, which will enable the team to explore new medicines from marine organisms.

The fully-funded project is expected to produce one to two publications reporting two to five new medicinally active molecules, according to the Tech Starter site.

Robosaur
Mark Kingsbury, a doctoral candidate in physics and a researcher in the Complex Rheology and Biomechanics Lab, is working with Associate Professor Daniel Goldman and a collaborator at Brown University to build a Robosaur. The project, “Robosaur Walks,” will study how dinosaurs walked, with the goal of using the secrets of the past to enhance the future.

“We’re building this robotic model to be able to analyze how dinosaurs walked from a simple perspective,” he said. “We have a lot of information about their tracks, but don’t yet have a technique for unearthing the information buried within the tracks.”

One of the reasons Kingsbury likes the idea of raising funds on Tech Starter is that the site allows people to invest directly in science.

“It lets researchers reach out directly to people, who can become a part of science and become more science-literate, which can only lead to good things,” he said.