Thomas Kieffer and Mohamad Ali Najia both aspire to conduct research in their fields and teach at a university level. 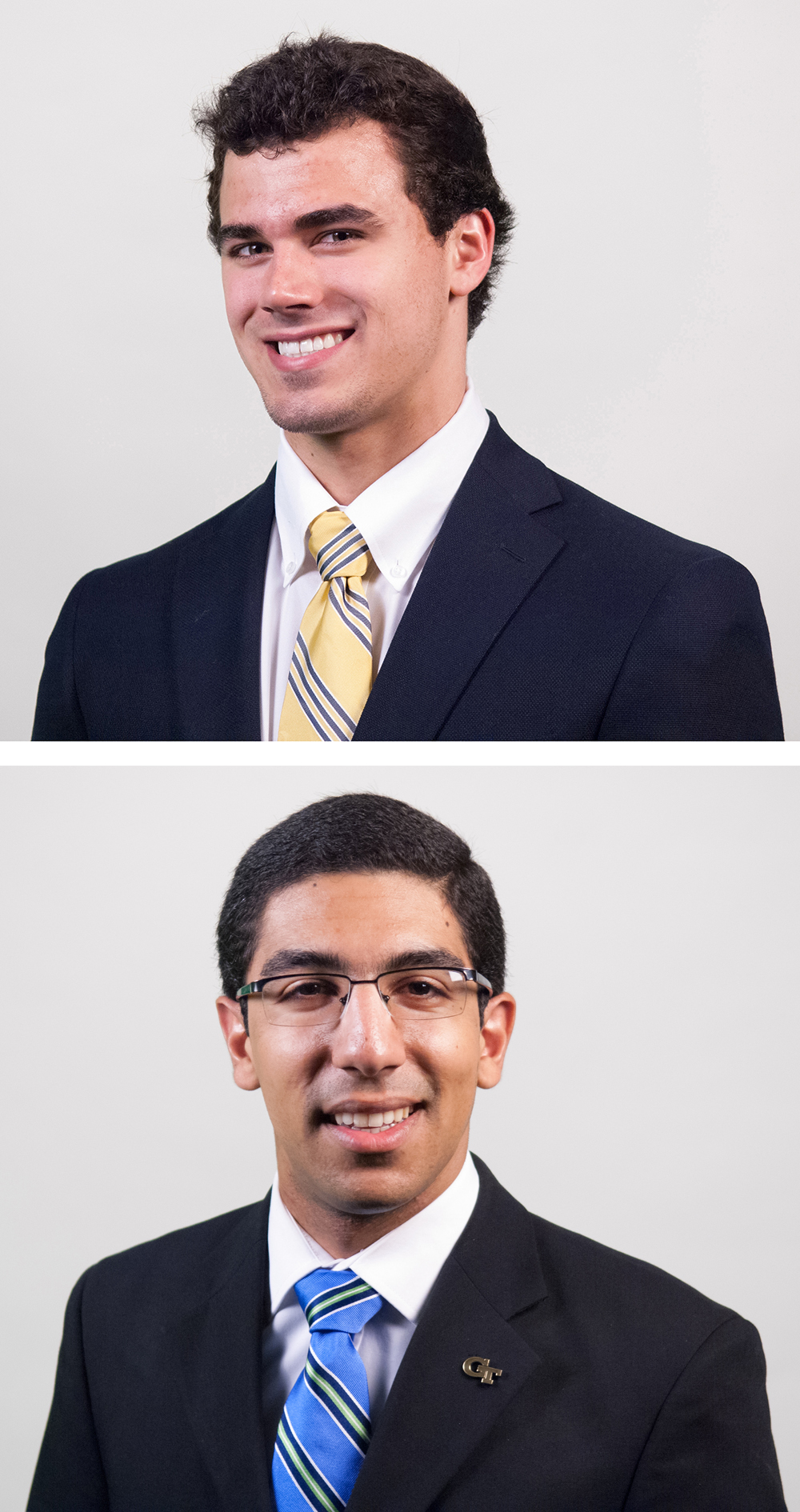 Thomas Forrest Kieffer (top) and Mohamad Ali Najia (bottom), 2014 Goldwater Scholars, both aspire to conduct research in their fields and teach at a university level.

Adding to a long list of successful scholars, two Georgia Tech students recently earned the prestigious Goldwater Scholarship for their work in science and engineering.

Thomas F. Kieffer, a senior majoring in physics and applied mathematics, focuses on computational astrophysics. “I make use of high performance computing to capture interplay of universal processes such as gravity, fluid dynamics, thermodynamics, and radiation,” he said. “A better understanding of these process in an astrophysical context can, in turn, yield results that strengthen the understanding of these processes in other branches of physics.”

Kieffer, whose other interests include fitness and playing guitar, said he has been curious about the “cosmological scale of the universe” since he was a child in Navarre, Fla. His first priority upon arriving at Georgia Tech was to find a research position in astrophysics, and by the end of his first semester, he was working with Tamara Bogdanovic, a theoretical astrophysicist and assistant professor in the School of Physics at Georgia Tech.

Kieffer said he is excited about the award, which covers tuition, fees, books, and room and board for $7,500 a year. “It will improve my application quality for graduate schools and the financial support is very helpful, of course,” he said.

His goal is to pursue a Ph.D. in theoretical physics and become a professor. He wants to continue doing research to aid in the growth and development of fundamental science, and he also wants to effectively communicate his discoveries to fellow scientists and the general public.

“I just feel a sort of happiness when learning about how nature works,” Kieffer said.

“Even before I was awarded the Goldwater, I wanted to go to graduate school to earn a Ph.D. in biomedical engineering,” Najia said. He was first drawn to this area of study in high school as he learned about the potential of stem cells and their role in curing disease.

His first semester at Tech, Najia joined Associate Professor Todd McDevitt’s Engineering Stem Cell Technologies lab, where he worked with graduate and post-doctoral students. In addition to being an Honors Program student, he went on to become editor-in-chief of The Tower, Tech’s peer-reviewed undergraduate research journal, and, last summer, he was a bioinformatics fellow through the Harvard-MIT Division of Health Sciences and Technology.

Throughout his undergraduate career, Najia has focused on his dream of generating fully functional tissues for implantation into patients, with the goal of curbing a nationwide allograft shortage, improving patient recovery, and saving lives.

“The Goldwater is an initial step toward building a career in the biomedical engineering field and performing impactful research,” he said.

He hopes to become a professor with a lab focused on genome engineering and is already excited to mentor the next generation of scientists.

“I am incredibly grateful for the institutional support I have received for my undergraduate research,” he said. “Most importantly, I am thankful for the mentorship of several faculty members, including Georgia Tech professors Todd McDevitt and Brani Vidakovic.”

Named for U.S. Senator Barry Goldwater, the Goldwater Scholarship is awarded to students in science, mathematics and engineering who intend to pursue research careers in their fields, with the intent of providing a continuing source of highly qualified scholars in these areas.

To learn more about how to apply for prestigious fellowships, visit fellowships.gatech.edu.