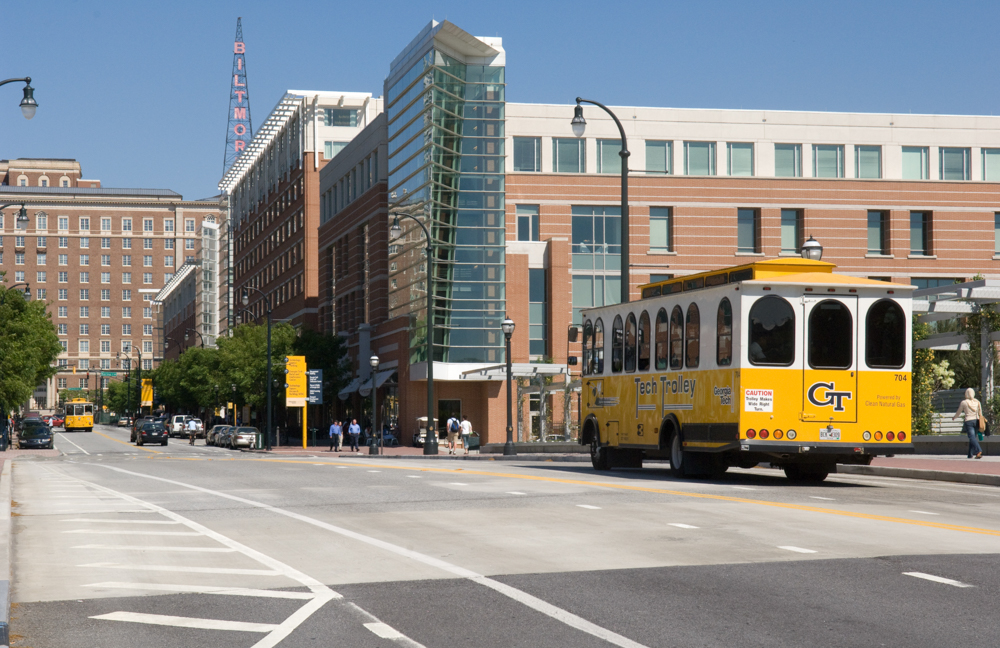 The Tech Trolley ferries passengers from the main campus to Tech Square and the Midtown MARTA station.

The Association of Public and Land-grant Universities (APLU) named eight public research institutions — including the Georgia Institute of Technology — as finalists for its second annual Innovation & Economic Prosperity (IEP) Awards.

All eight finalists, which also include Virginia Tech, Pennsylvania State University and Purdue University, are vying for four different awards that highlight the key components of economic engagement: talent, innovation, place and connections.

APLU is a research, policy and advocacy organization that represents 236 public research universities and state university systems. The winners will be announced at APLU’s 127th annual meeting on Nov. 4.

Economic development has been a core mission of Georgia Tech since its founding in 1885.

The institution has a number of initiatives and units dedicated to furthering economic development statewide through two key divisions: research with Stephen E. Cross serving as executive vice president of research, and outreach and business development at the Enterprise Innovation Institute (EI2).

EI2 is charged with a number of development programs that include business startup and innovation support through its Advanced Technology Development Center, Flashpoint, and VentureLab. It also has advisory and consulting services through its Innovation Strategy and Impact program, the Georgia Manufacturing Extension Partnership, and the Minority Business Development Agency (MBDA) Business Center, among other initiatives.

Technology Square, which is adjacent to Tech’s campus and home to EI2, also is a critical component. Besides EI2, it also is home to five corporate innovation centers including the AT&T Foundry, the Global Learning Center and two business incubators.

“Economic development has been an important part of Georgia Tech’s mission since we were founded 129 years ago,” said Stephen Fleming, EI2’s executive vice president.

While EI2 is a critical component of that economic development focus, Fleming said it’s a core undertaking at Tech as whole.

On the research side, Tech has created 10 Interdisciplinary Research Institutes (IRIs) to beef up both industrial and economic engagement.

All told, Tech’s direct economic development initiatives surpassed $2.3 billion in fiscal year 2011, the most recent data available. That’s more than any other institution in the University System of Georgia.