Georgia Tech recently asked all undergraduate students for their feedback by completing the Student Experience Survey, a study designed to evaluate a range of aspects of a student’s time at the Institute. 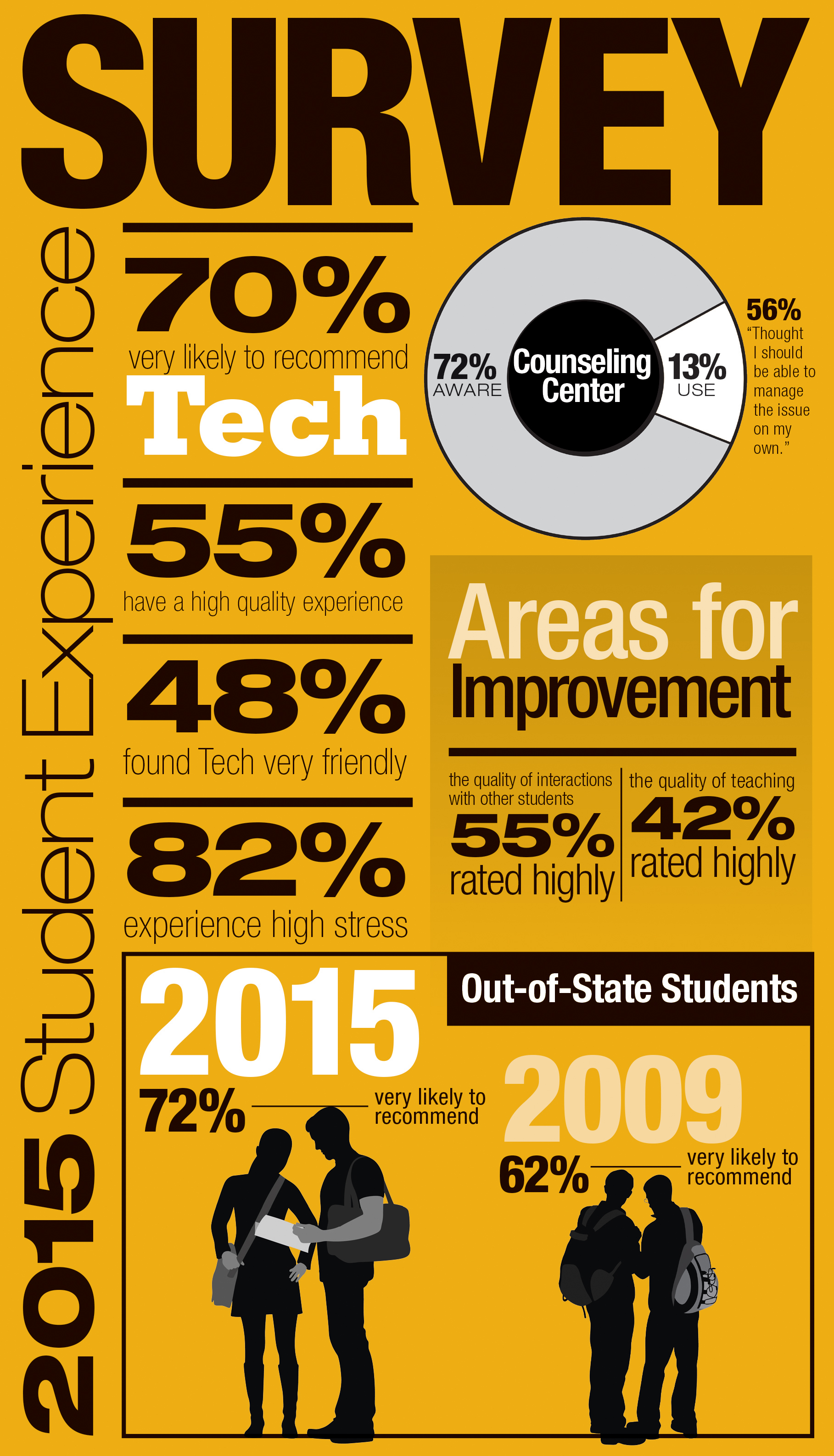 Georgia Tech recently asked all undergraduate students for their feedback by completing the Student Experience Survey, a study designed to evaluate a range of aspects of a student’s time at the Institute. The study was sponsored by the Student Government Association (SGA) and facilitated by Institute Communications.

Tech fared better on nearly every metric in the 2015 survey than in 2009. Overall, 70 percent of students said they are highly likely to recommend Tech to a prospective undergraduate student. Forty-eight percent feel strongly that Tech has a friendly and welcoming atmosphere, up from 41 percent in 2009.

Out-of-state students rated their experience as better than in 2009 in a number of ways. They are now more likely to recommend Tech to a prospective student (72 percent), feel they have a more quality overall experience (60 percent), and feel Tech has a friendly and welcoming atmosphere (52 percent).

“It’s encouraging to see how much the student-centered metrics improved, and that overall as a campus we are doing the right things and making campus better,” said Dillon Roseen, outgoing undergraduate SGA president. Roseen and his executive cabinet made the survey a priority in their goals for the 2014-15 academic year.

In a section of the survey evaluating stress, 82 percent of students said they have experienced a high level of stress in at least one of 12 areas surveyed. The highest stress area was academics. When asked what resources students use in response to that stress, the Campus Recreation Center (CRC) came out on top.

“The opportunity the CRC presents is exciting — it could be an entry point for other mental health resources,” Roseen said. He also noted success in the high awareness of the Counseling Center; 72 percent of students reported awareness of it, though only 13 percent reported using it.

Of the 13,633 invitations sent to undergraduate students, 3,586 students took the opportunity to provide feedback in the survey; 1,957 fully completed their responses for use in data analysis. Open-ended comments from incomplete responses were still captured with others from that portion of the survey.

The response demographics were largely reflective of Tech’s student body, with a slightly higher percentage of women completing the survey (43 percent) than that of the undergraduate population (34 percent).

The survey was first conducted in 2009 and conceived as an annual longitudinal study to track progress over time. SGA has expressed interest in conducting the study once every four years, with the goal of capturing information from every student at least once during his or her time on campus.

A presentation of the survey data will take place at a brown bag session on Tuesday, June 23, at 11 a.m. in the Gordy Room, Wardlaw Center. RSVP to attend at www.gtstudentexperience.eventbrite.com. A video of the presentation will be made available at www.comm.gatech.edu following the session.