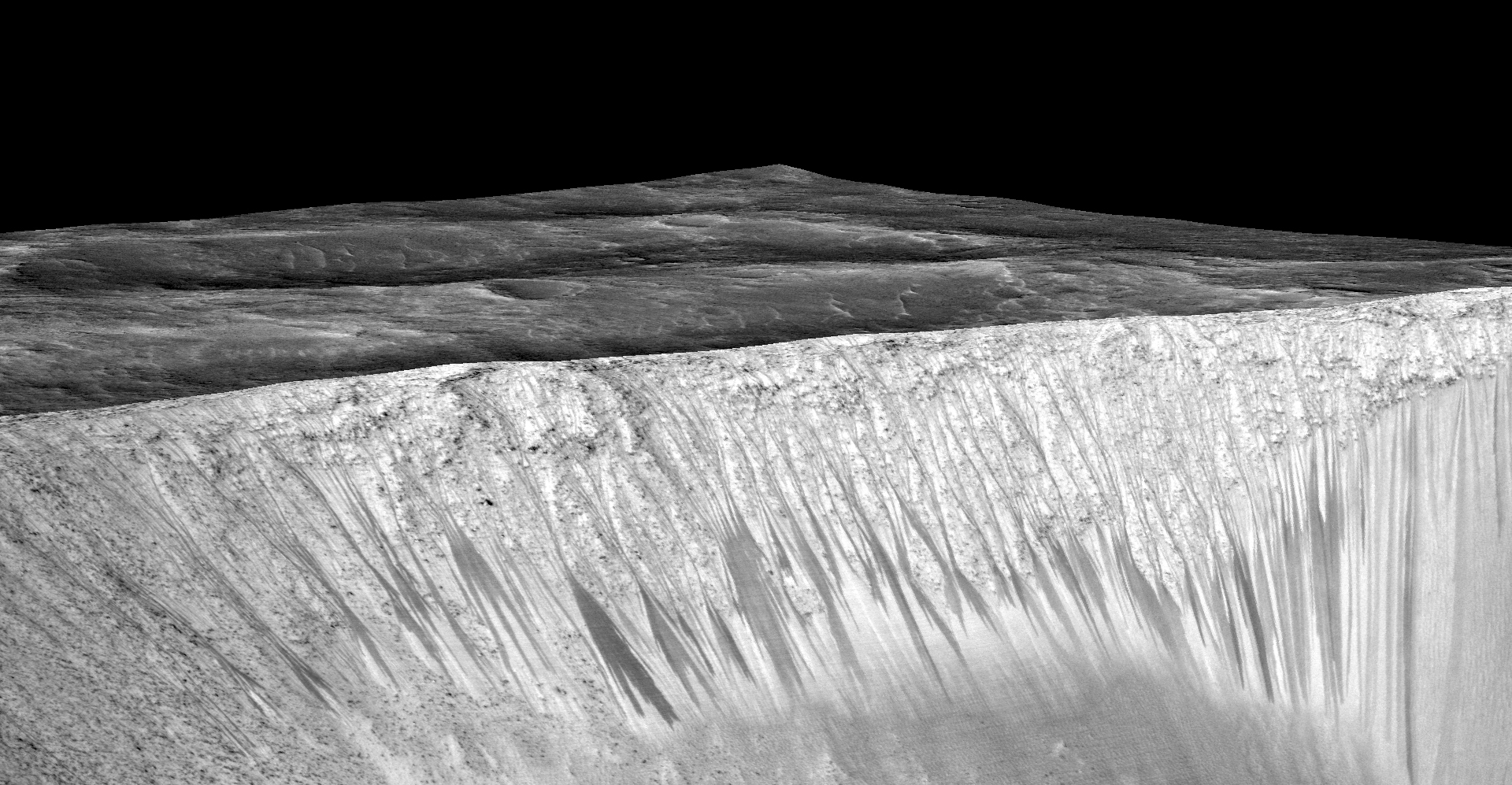 Dark narrow streaks called recurring slope lineae flowing out of the walls of Garni Crater on Mars. The streaks are up to a few hundred meters in length. Photo is color enhanced. Image credit: NASA/JPL/University of Arizona.

A new study led by scientists at the Georgia Institute of Technology provides the strongest evidence yet that there is intermittent flowing liquid water on modern Mars. Using instruments on board NASA’s Mars Reconnaissance Orbiter (MRO), researchers measured spectral signatures of hydrated minerals on slopes where mysterious, possibly water-related streaks are found on the red planet. These streaks, known as recurring slope lineae (RSL), form and snake down the planet’s steep slopes during warm seasons when temperatures exceed -10 degrees Fahrenheit (-23 degrees Celsius). They disappear at colder times during the Martian year.

Lujendra Ojha, the Georgia Tech Ph.D. candidate who led the study, first noticed these puzzling features in High Resolution Imagine Science Experiment (HiRISE) images returned by the MRO spacecraft as an undergraduate at the University of Arizona in 2010. Ojha says spectral signatures of hydrated salts were visible in many RSL if they were relatively wide in diameter. The clincher came when the researchers looked at the same locations when RSL weren’t visible and the hydration signatures had disappeared.

“Something is hydrating these salts, and it appears to be these streaks that come and go with the seasons,” said Ojha. “This means the water on Mars is briny, rather than pure. It makes sense because salts lower the freezing point of water. Even if RSL are slightly underground, where it’s even colder than the surface temperature, the salts would keep the water in a liquid form and allow it to creep down Martian slopes.”

Up until this point, the recurrence of RSL during the warmest seasons suggested action of a volatile. The still cool ground temperatures suggested brines, but it was difficult to get the footprint of the orbital mapping spectrometers on such narrow features.

Perchlorates have previously been discovered on Mars. The Phoenix lander and Curiosity both found them in the planet’s soil, and some scientists believe that the Viking missions in the 1970s measured signatures of these salts. However, this study of RSL detected perchlorates in entirely different areas from where the landers explored. This is also the first time perchlorates have been identified from orbit.

“Almost 40 years after the Viking landers first analyzed the soils on Mars, it’s exciting that we’re able to expand the places where this important resource might be concentrated on the red planet,” said Mary Beth Wilhelm, another Georgia Tech Ph.D. candidate and NASA researcher who co-authored the paper.

Their advisor, Georgia Tech Assistant Professor James Wray, says the current process for observing spectral signatures is a bit limited. Because of its fixed orbit, MRO sees the same locations of Mars at the same time every day.

“We’re only able to receive data on these RSL locations in mid-afternoon, when the air is dry and the morning humidity is almost gone,” Wray said. “When future spacecraft arrive in the planet’s orbit, we could see larger, wetter RSL at earlier times of the day. This could just be the tip of the iceberg.”

Regardless, for Ojha, the new findings are more proof that the mysterious lines he first saw meandering down Martian slopes five years ago are indeed current-day water.

“When most people talk about water on Mars, they’re usually talking about ancient water or frozen water,” he says. “But there’s more. This is the first spectral detection that unambiguously supports our liquid water-formation hypotheses for RSL.”

The paper, “Spectral evidence for hydrated salts in recurring slope lineae on Mars,” is published in the journal Nature Geoscience.

This work is partially funded by the National Science Foundation Graduate Research Fellowship Program under Grant No. DGE-1148903. The research was further supported by MDAP Grant No. NNX13AK01G. Any conclusions expressed are those of the principal investigator and may not necessarily represent the official views of the funding organizations. 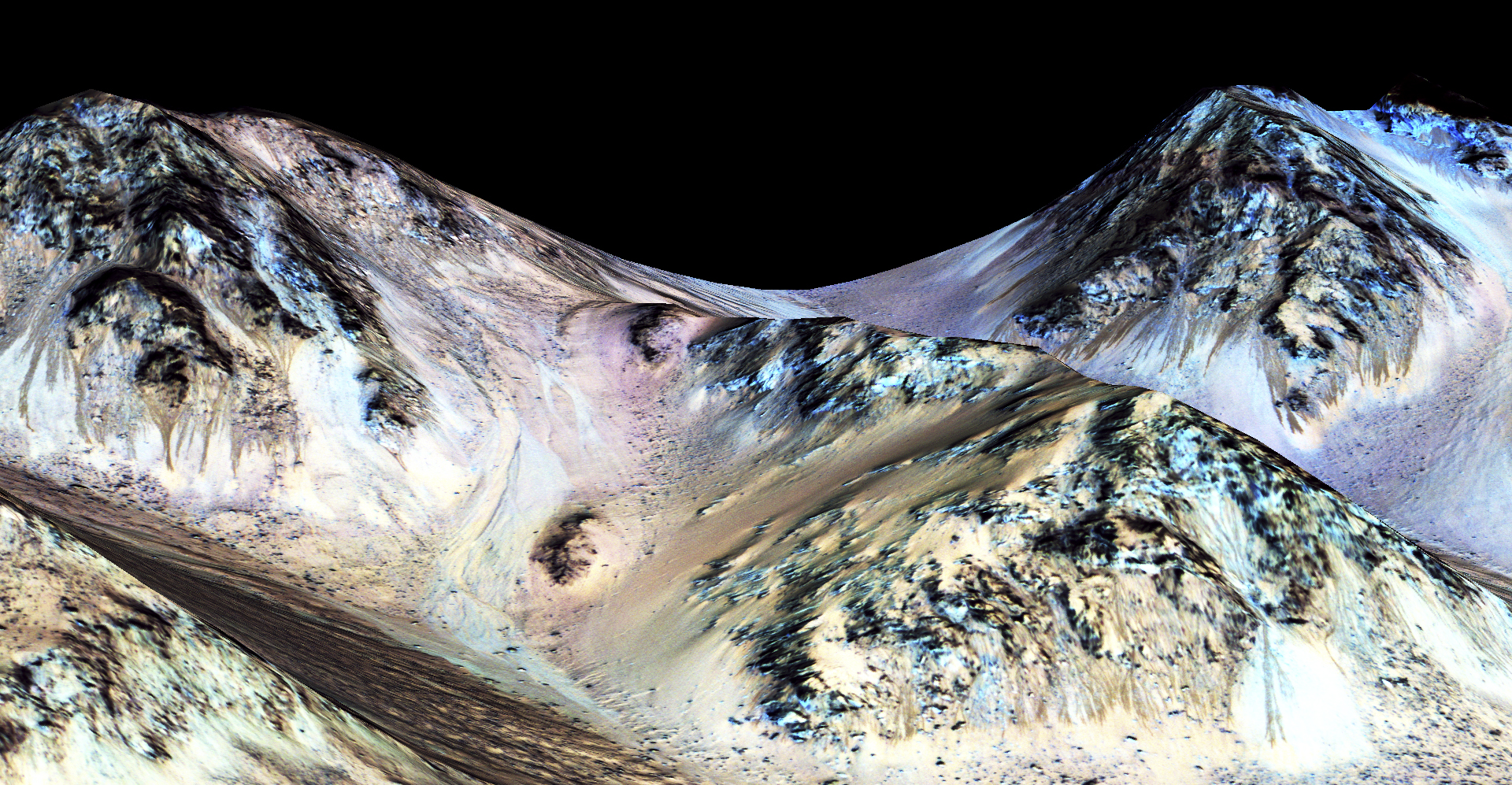 False-color photo of streaks, believed to be flowing water on Mars, at Hale Crater. Image credit: NASA/JPL/University of Arizona 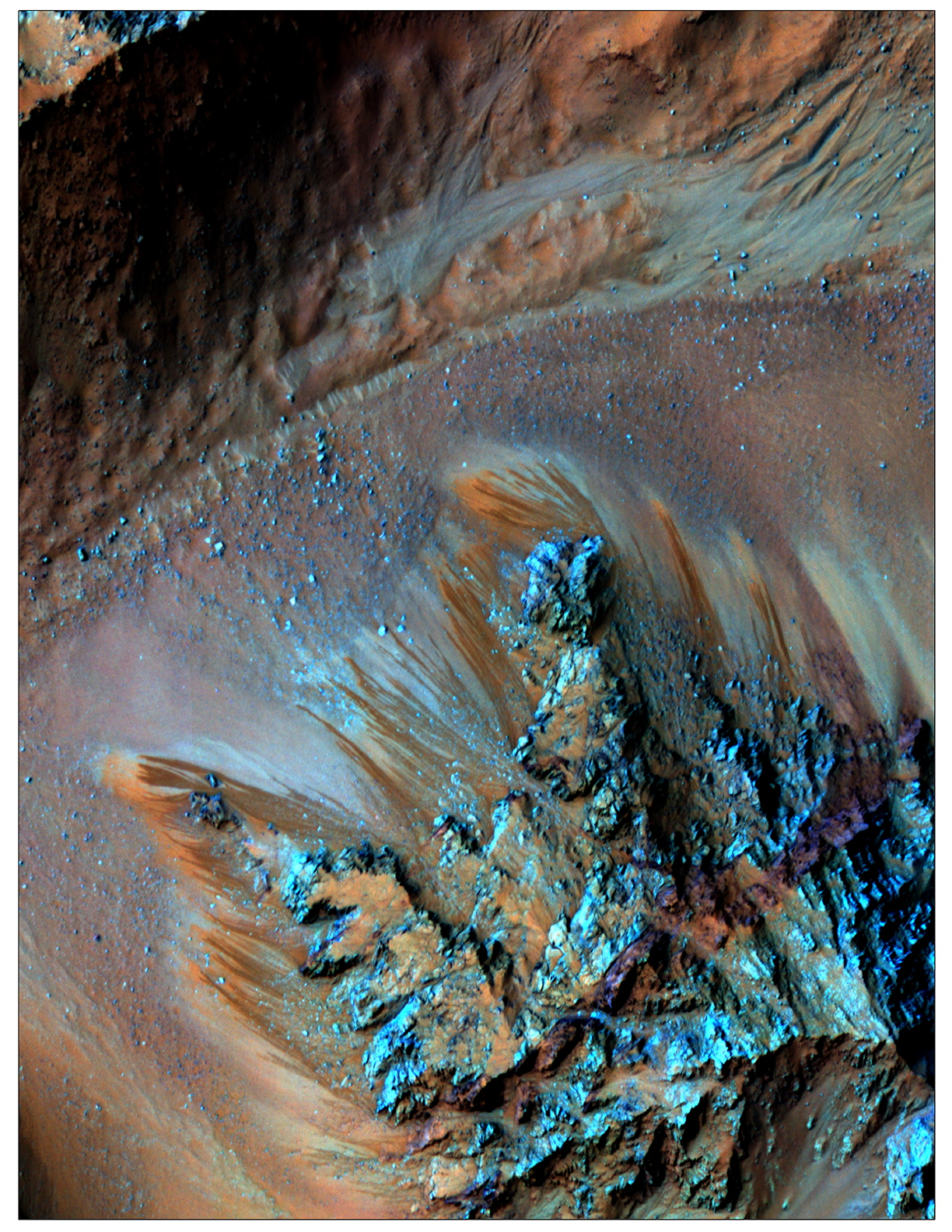 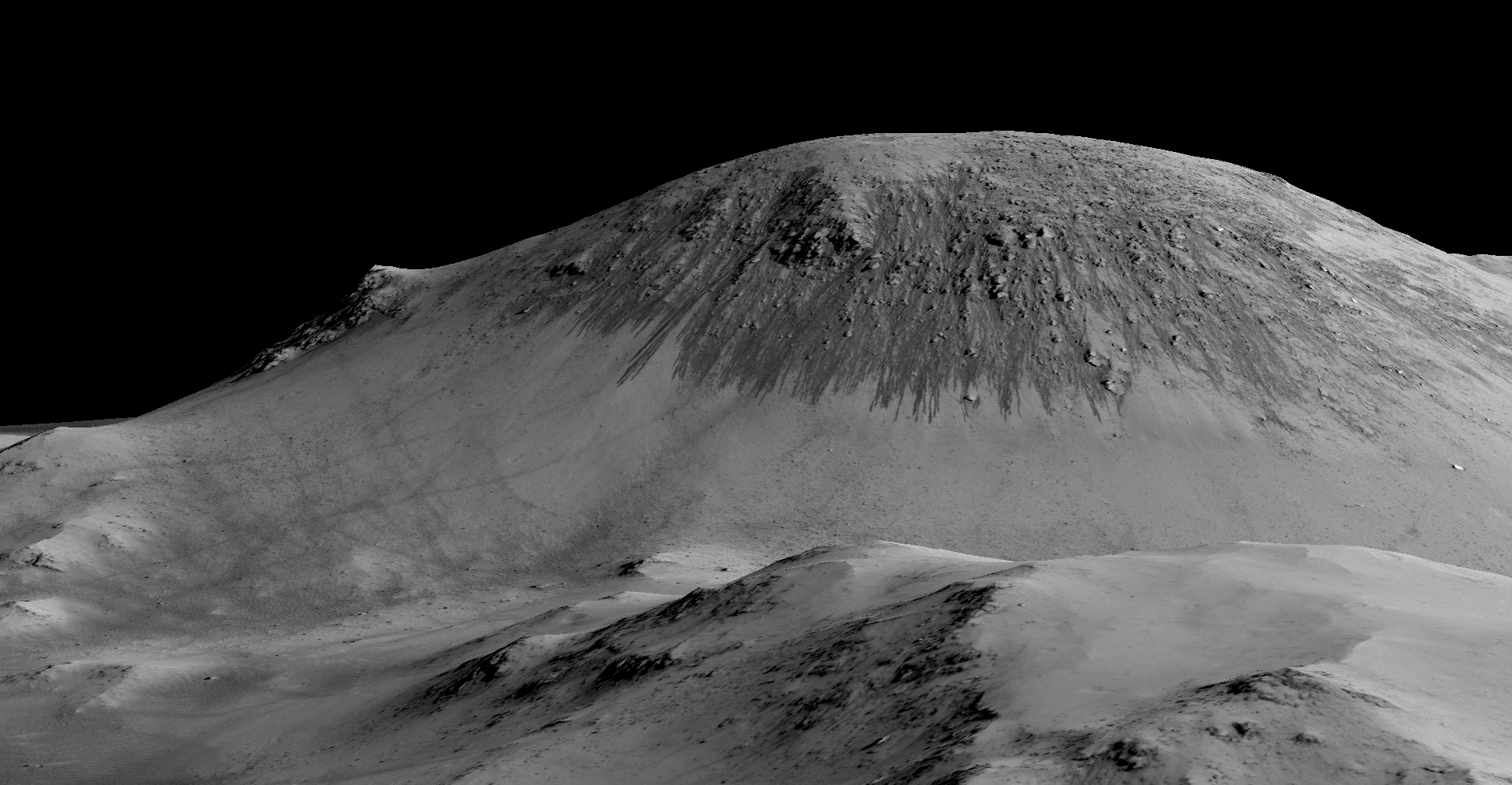 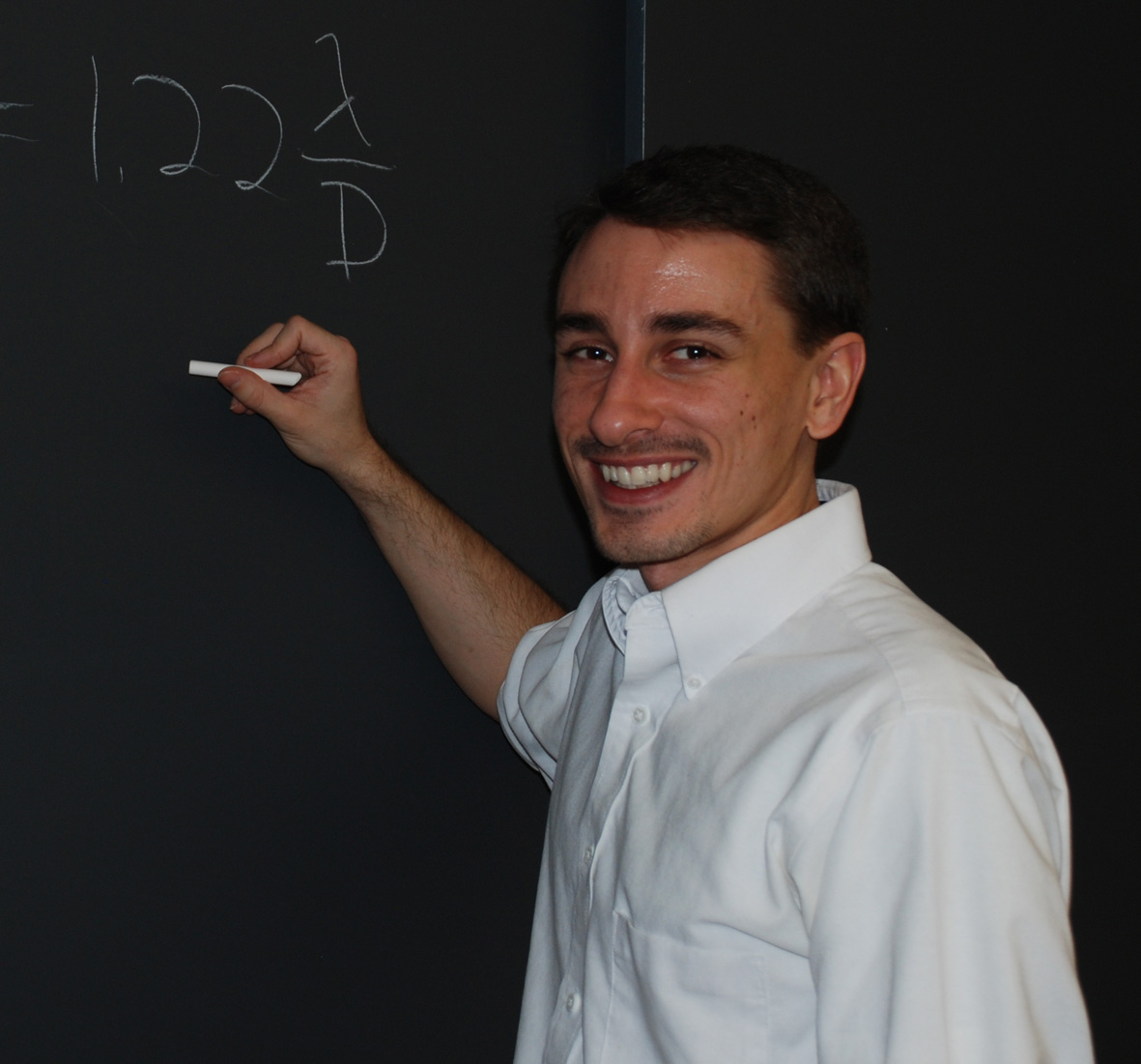