How Mechanical Force Triggers Blood Clotting at the Molecular Scale

Researchers have developed a clearer understanding of how platelets sense mechanical forces to launch the clotting process. 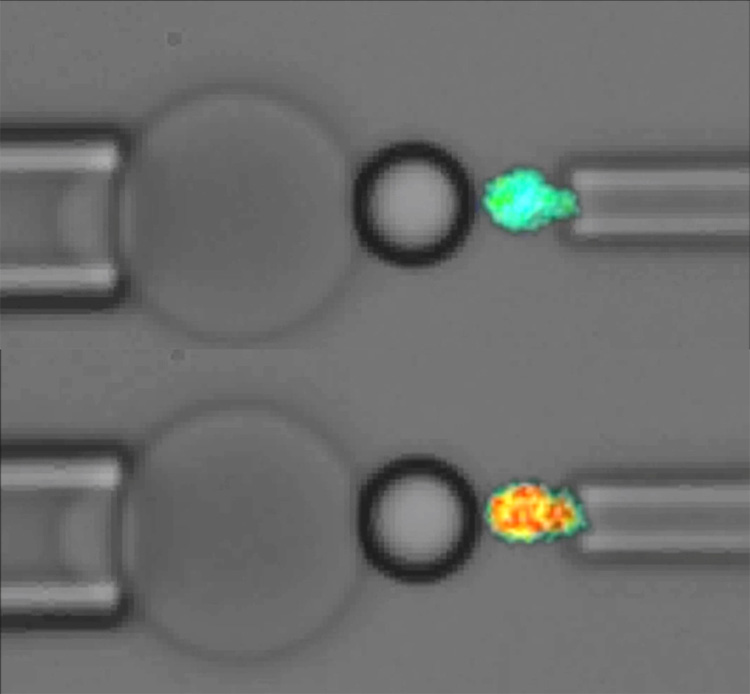 Micrographs from an experiment using the fluorescence biomembrane force probe to interrogate a single molecule on a live platelet. The epifluorescence images (pseudo-colored to reflect the calcium level) of the platelet are superimposed onto the bright-field images. The upper panel shows a platelet with low calcium inside. The lower panel shows calcium firing in the platelet. (Credit: Lining (Arnold) Ju)

Using a unique single-molecule force measurement tool, a research team has developed a clearer understanding of how platelets sense the mechanical forces they encounter during bleeding to initiate the cascading process that leads to blood clotting.

Beyond providing a better understanding of this vital bodily process, research into a mechanoreceptor molecule that triggers clotting could provide a potential new target for therapeutic intervention. Excessive clotting can lead to heart attack and stroke – major killers worldwide – while insufficient clotting allows life-threatening bleeding.

“We have opened a new door to study how mechanical force triggers biochemical signals inside living cells,” said Lining (Arnold) Ju, who was part of the team conducting the research as a Ph.D. student in the Wallace H. Coulter Department of Biomedical Engineering at Georgia Tech and Emory University.

Now a postdoctoral researcher at the University of Sydney and the Heart Research Institute, Ju worked with Georgia Tech graduate student Yunfeng Chen, to conduct the research in the laboratory of Professor Cheng Zhu in the Coulter Department. Also part of the research were Lingzhou Xue from Penn State University and Xiaoping Du from the University of Illinois at Chicago.

The research, supported by the National Institutes of Health and the National Science Foundation, was reported July 19 in the journal eLife. It is believed to be the first detailed mechanobiology study on how mechanical forces acting on a single molecule on a platelet are sensed and transduced into biochemical signals. Beyond blood clotting, the work could have implications for other cellular systems that respond to mechanical force.

In the beginning of the clotting process, human platelets use a highly specialized molecule known as glycoprotein Ibα (GPIbα) to receive mechanical signals. In a process known as mechanosensing, the mechanical information is converted into chemical signals – the release of different types of calcium ions – that alter adhesion between platelets and other components of the clotting process. Using their unique experimental equipment, the research team correlated various forces applied to the GPIbα molecule with different chemical signals, working to understand the operation of this natural transducer built into human platelets.

How cells sense their mechanical environment and transduce forces into biochemical signals is a crucial, yet unresolved question in mechanobiology, the researchers noted in their paper. The researchers studied how mechanical forces outside the platelets trigger the release of calcium ions inside the cells. They applied force on the GPIbα molecule via the binding of von Willebrand factor and a mutant form of this plasma protein that causes von Willibrand Disease, a bleeding disorder.

The researchers observed two distinct mechanical events: the unfolding of two geometrically separate domains of GPIbα. They discovered that these two events occur synergistically to relay the information about the forces acting on GPIbα, allowing the molecule to sense both the magnitude of the force and how long it is exerted.

The two unfolding events play distinct roles in determining the quantity and quality of the signals – the strength and types of calcium ions fired by the platelet. The strength of the signal is related to the duration of the force, noted Chen, who recently obtained a Ph.D. in bioengineering and will soon be a postdoctoral fellow at The Scripps Research Institute at La Jolla, Calif.

“The GPlbα molecule is bound to and pulled by the von Willebrand factor, which is prolonged by unfolding of one GPIbα domain,” he said. “But the strong signal type always follows the unfolding of the other GPIbα domain, which is enhanced by prolonged pulling at a high force,” Chen added. “These properties generate cooperativity – a synergistic effect that results in the highest signaling quantity and quality at an optimal force where it lasts the longest.”

However, the researchers discovered that the von Willebrand factor mutation associated with Type 2B von Willibrand Disease abolishes the synergy between the two unfolding events, preventing the GPIbα molecule from efficiently transducing mechanical signals into biochemical signals.

“For years, researchers had thought that the problem was solely the defect in platelet adhesion,” said Zhu. “But our research reveals another defect: the mechano-sensing machinery doesn’t work well in the presence of this mutation. The platelet just doesn’t get the signal that would activate it.”

That knowledge could potentially lead to new treatments for the mutation, and for new drugs to help control clotting.

The unique nanotool developed by the researchers is known as the fluorescence biomembrane force probe. The probe uses a red blood cell to apply force to a single molecule on a platelet. While force is being applied, the researchers can examine the change in calcium ions released inside the platelet by fluorescence. The ability for such concurrent measurement is key to uncovering the GPIbα mechanosensing mechanism on a live platelet.

“In this work, we visualized the conformational changes in a single protein and the subsequent signaling event inside a cell at the same time” explained Ju. “A GPlbα molecule on the platelet surface was unfolded when we pulled on it with a force on the scale of piconewtons. That molecular conformational change triggers the calcium ion release in platelets instructing them to become more adhesive and more reactive.”

The two GPIbα domains studied by the researchers exist widely in many protein families. The methods developed by Ju and collaborators in this work can be used to analyze mechano-sensing in other biological systems.

This work was supported by NIH grants HL132019, HL062350, HL080264, and HL125356, Diabetes Australia research grant G179720, a Sydney Medical School 2016 early-career researcher kickstart grant, and NSF grant DMS-1505256. The content is solely the responsibility of the authors and does not necessarily represent the official views of the funding agencies. 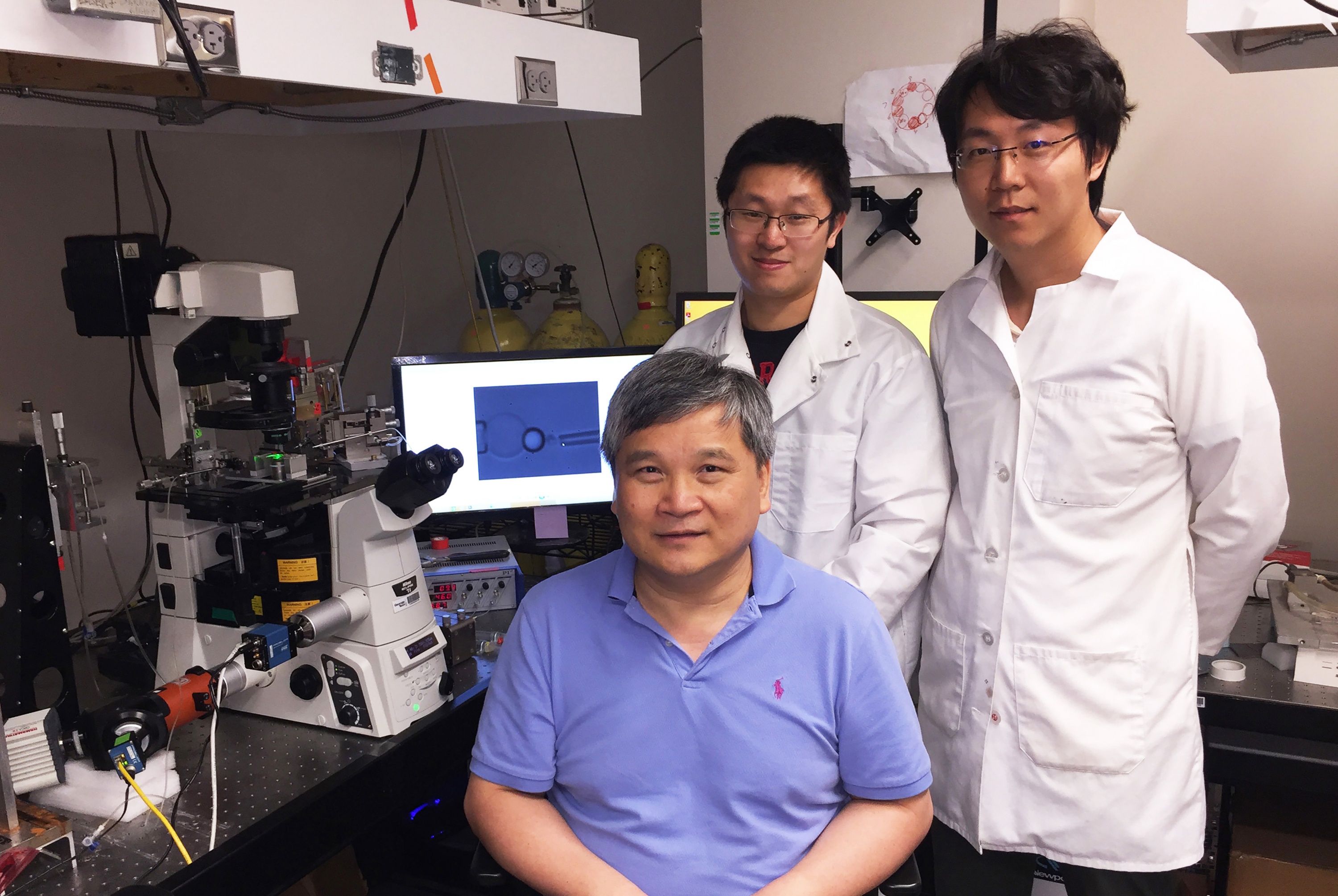 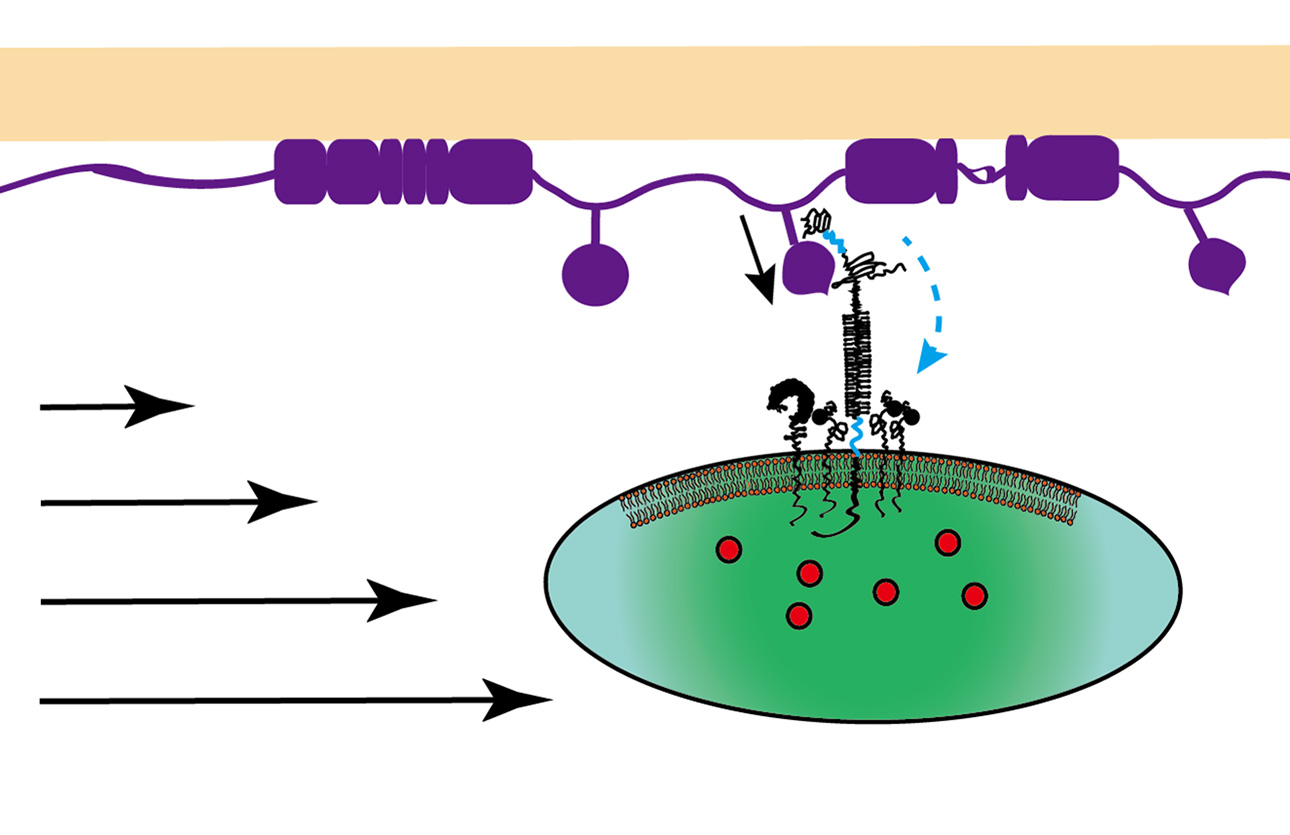 A platelet interacts with the injured vascular surface at the beginning of blood clotting. The platelet uses a glycoprotein molecule to bind von Willebrand factor (VWF) to resist the dislodging force from the bloodstream. The force unfolds the domain of the molecule that binds VWF, which prolongs binding and promotes unfolding of the domain of the molecule that is close to the platelet membrane. These cooperative unfolding events lead to strong calcium signaling inside the platelet. (Credit: Yunfeng Chen, G