But, But: Allow Me to Interrupt

One of the hallmarks of the 2016 presidential debate season has been how often the candidates simply interrupted each other. 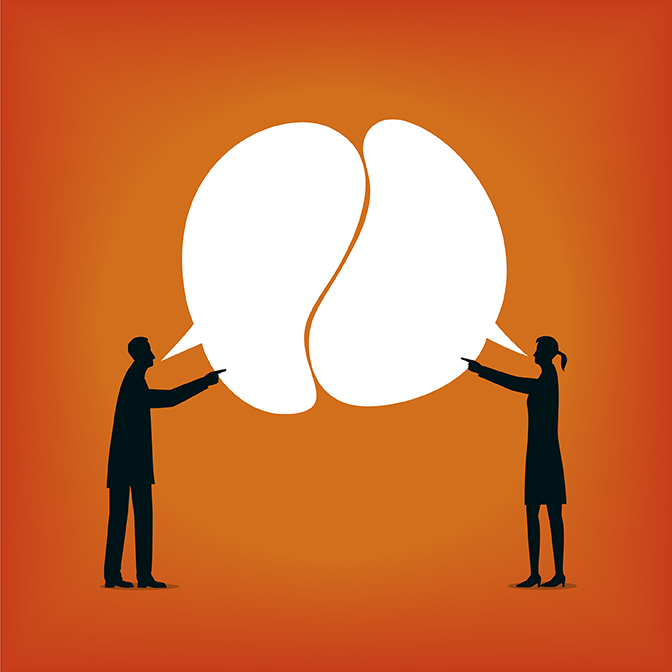 The 2016 presidential campaign – particularly the primary and presidential debates – undoubtedly will be remembered as one of the most unusual periods in recent political history, with the candidates talking about everything from national security and the economy, to email servers and income taxes, to topics that seem better suited for a bar than a debate stage. One of the hallmarks of this debate season has been how often the candidates simply interrupted each other.

“Debates usually have a turn-taking system and a moderator that is meant to manage the turn-taking,” said Brian Larson, assistant professor, School of Literature, Media, and Communication. This turn-taking allows the audience to see what drives the candidates.

“The purpose of the [debate] is to expose the ideas and personalities of the candidates to the audience,” he said.

Interruptions, particularly during a debate, usually indicate disagreement with the person speaking.

“They are often an effort by the interrupter to cast doubt on what the speaker is saying,” Larson said. “We call that a ‘face-threatening act,’ one designed to exert the interrupter’s power over the speaker or to weaken the speaker’s position or credibility with the audience.”

Interruptions in the Workplace

What happens during a discussion at work, when there isn’t a moderator to manage the conversation?

“In a less moderated or an unmoderated conversation, turn-taking is negotiated differently,” said Richard Utz, chair of the School of Literature, Media, and Communication. “Intonation, pausing, phrasing, or non-verbal cues that one is winding down – such as raising one’s hand during class or a meeting – can all be read as an invitation to take the floor.”

Larson said that when you are in a new environment a good strategy is to watch what other people are doing.

“For instance, if someone is speaking does everyone wait until there is a gap before interrupting – or do they wait until it sounds like the end of what the speaker is saying? Do they raise their hands? Does someone – a meeting chair or teacher – appear to be allocating speaking turns?”  Larson said.

But sometimes it’s just hard to get a word in edgewise.

“In typical conversation, there should be give and take, with equal time for each party, but some people just like to talk or cannot seem to hear an interlocutor,” said Carol Colatrella, professor and associate dean for graduate studies, Ivan Allen College of Liberal Arts.

She noted that some people are more polite than others who do not hesitate to interrupt.

“In everyday life, the person with more authority or fewer manners is more likely to speak over someone. Adults will speak over children, and bullies speak over anyone else,” she said.

In general, the gender difference between men and women when it comes interrupting is noticeable, but relatively small across all kinds of situations, according to Utz, who said interruptions are more common in all-male than all-female conversations.

“While men interrupt women at least as often or somewhat more often than the other way around, gender difference reveals itself more forcefully depending on whether the conversation is public or private, related to status and dominance, or to building community and connection,” Utz said. “In public conversations related to social status and competition, men will out-interrupt women; women seem to ‘interrupt’ men more often in private conversations to perform so-called cooperative overlap to indicate interest, support, or affirmation,” he said.

“If one is aware of these kinds of gender differences, it is possible to adjust one’s behavior,” Utz said. “One technique I have found helpful is that of reflective listening. Instead of immediately seeking to establish social superiority, making a conscious attempt at understanding the other speaker’s views by repeating his or her idea back to her or him in my own words can establish a better foundation for a collaborative conversation.”

Colatrella said that it has taken time for her to learn some strategies to express her point of view in a contentious meeting when it is difficult to take the floor.

“I try to speak only when I have something significant to say. I prepare to say something concise and relevant. And I raise my hand and wave it if necessary,” she said.