How Do You Perform CPR? This Device Will Teach You

The years Ryan Williams spent working as a lifeguard and CPR instructor in Las Vegas taught him that it’s important for people to know how to perform the life-saving procedure.

But few people have the time or money to take a class. Williams wanted to find a way to bring the training to more people.

He teamed up with two friends, and together the three Georgia Tech students invented a device that walks a person through all the steps to perform CPR.

“You can pick up the device, turn it on and immediately begin the latest standard of care,” said Williams, a computer engineering major.

The device, called CPR+, is a CPR mask with LED lights that offers user feedback throughout the resuscitation process. Turn it on and a voice tells you to call 911. Then it directs you to put the mask around someone’s face. It instructs you how to attach its sensor that automatically measures heartrate. Then, if needed, it directs you to deliver rescue breaths. If you do it right, the lights turn green. Do it wrong and the lights turn red. Next, it will tell you to begin chest compressions and will count along at the correct pace.

The invention is one of six competing for Georgia Tech’s 2017 InVenture Prize. The annual contest encourages and supports interest in innovation and entrepreneurship by rewarding students with cash prizes for inventions that have the potential to solve the world’s problems. The finale takes place Wednesday night at the Ferst Center for the Arts.

While there are apps that can walk someone through the CPR steps, they are unable to measure a victim’s heart rate and breath rate, said Dave Ehrlich, a computer engineering major from Portland, Ore.

CPR+ makes it possible for “anyone, anywhere at any time to perform life-saving techniques,” Ehrlich said. “This device doesn’t exist anywhere else.”

The team built much of the device in the GVU Prototyping Lab. They are currently on the third iteration of CPR+ and may finish a fourth before the finale.

They’re used to working together and with others on team projects through their classes at Georgia Tech, said Samuel Clarke, a mechanical engineering and computer science major from Indianapolis.

“We’ve had to put the best of what we’ve learned into play,” Clarke said. “There are times when it was hard and I didn’t think we’d get it done, but we had to rise above the pressure and put it all together.” 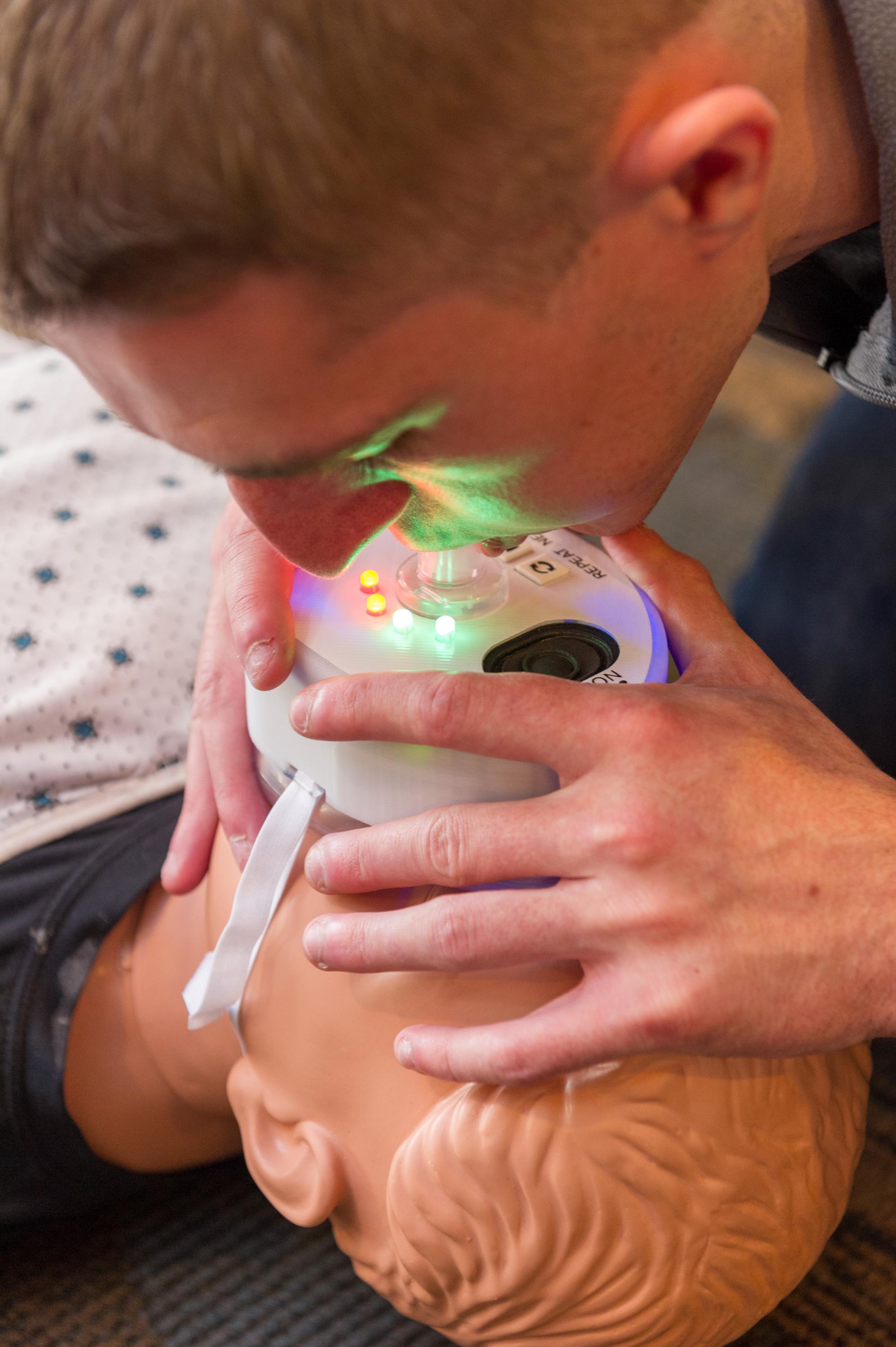 CPR+ is a CPR mask with LED lights that offers user feedback throughout the resuscitation process. The device is one of six inventions is competing for Georgia Tech’s 2017 InVenture Prize. Ryan Williams, a computer engineering major, demonstrates delivering rescue breaths with the device. When done correctly the lights turn green. The other inventors are: Dave Ehrlich, a computer engineering major, and Samuel Clarke, a mechanical engineering and computer science major. Photo by Rob Felt.