Georgia Tech researcher Baratunde Cola has been recognized by the National Science Foundation.

The National Science Foundation (NSF) has recognized Baratunde "Bara" A. Cola of the Georgia Institute of Technology and John V. Pardon of Princeton University with the nation's highest honor for early career scientists and engineers, the Alan T. Waterman Award. This marks only the second time in the award's 42-year history that NSF selected two recipients in the same year.

Bestowed annually, the Waterman Award recognizes outstanding researchers age 35 and under in NSF-supported fields of science and engineering. In addition to a medal, awardees each receive a $1 million, five-year grant for research in their chosen field of study.

"We are seeing the significant impact of their research very early in the careers of these awardees," said NSF Director France Córdova. "That is the most exciting aspect of the Waterman Award, which recognizes early career achievement. They have creatively tackled longstanding scientific challenges, and we look forward to what they will do next."

Cola pioneered new engineering methods and materials to control light and heat in electronics at the nanoscale. He serves as an associate professor at Georgia Tech's George W. Woodruff School of Mechanical Engineering.

In 2015, Cola and his team were the first to overcome more than 40 years of research challenges to create a device called an optical rectenna, which turns light into direct current more efficiently than today's technology. The device could lead to highly efficient solar cells with the potential to power new generations of cell phones, laptops, satellites and drones.

The technology uses carbon nanotubes that act as tiny antennas to capture light. Light is then converted into direct current by miniature, nanotechnology-enabled mechanisms called rectifier diodes. The research has the potential to double solar cell efficiency at one-tenth the cost, according to Cola.

"Ultimately, we see the Waterman as fueling the final leg of our long-term effort to be the first to truly bring transformational applications of carbon nanotubes to the market," Cola said. "As of now, we know that there will be a substantial investment in engineering another breakthrough in carbon nanotube optical rectenna science."

Cola also works to commercialize other novel nanotechnology-based innovations. In 2015, he participated in the NSF Innovation Corps (I-Corps) at Georgia Tech, a program that immerses scientists and engineers in entrepreneurial training, teaching them to look beyond the lab and consider the commercial potential or broader impacts of their research. I-Corps participants interview prospective customers and identify market needs for federally funded innovations.

In addition, Cola and colleagues were responsible for engineering breakthroughs, including the first thermally conductive amorphous polymer, the first practical electrochemical cell for generating electricity from waste heat and the first evidence of thermal energy conduction by surface polaritons.

Cola, 35, is the founder of Carbice Nanotechnologies, Inc., a company that uses a carbon nanotube-material to remove heat from computer chip testing stations, allowing for faster and cheaper testing of chips during production. The technology could eventually result in smaller, faster, more powerful computer chips for use in everything from smartphones to supercomputers. Carbice Nanotechnologies received support from NSF's Small Business Innovation Research program.

He also is co-founder of the NSF-funded Academic and Research Leadership Network, a group of more than 300 Ph.D. engineering researchers from minority groups underrepresented in academia, industry and government laboratories.

At Princeton University, Pardon is a Clay Research Fellow and professor of mathematics. His research focuses on geometry and topology, the study of properties of shapes that are unaffected by deformations, such as stretching or twisting. He is known for solving problems that stumped other mathematicians for decades and generating solutions that provide new tools for geometric analysis.

The National Science Foundation (NSF) is an independent federal agency that supports fundamental research and education across all fields of science and engineering. In fiscal year (FY) 2016, its budget is $7.5 billion. NSF funds reach all 50 states through grants to nearly 2,000 colleges, universities and other institutions. Each year, NSF receives more than 48,000 competitive proposals for funding and makes about 12,000 new funding awards. NSF also awards about $626 million in professional and service contracts yearly.

-    Written by the National Science Foundation

A carbon nanotube optical rectenna converts green laser light to electricity in the laboratory of Baratunde Cola at the Georgia Institute of Technology. Cola has been honored with the Alan T. Waterman award from the National Science Foundation. (Credit: Rob Felt, Georgia Tech) 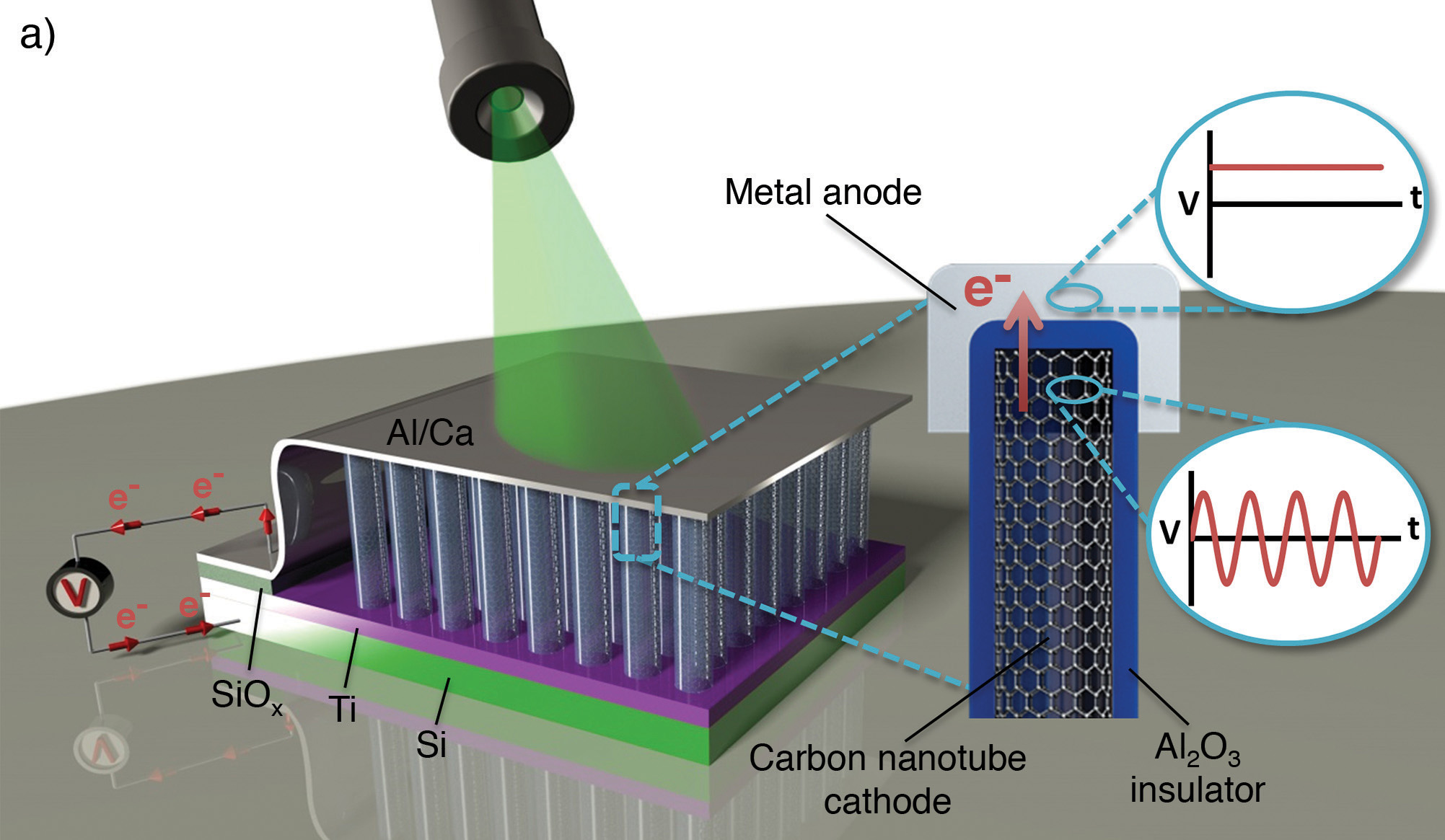 This schematic shows the components of the optical rectenna developed at the Georgia Institute of Technology. Associate Professor Baratunde Cola has received the Alan T. Waterman award from the National Science Foundation in recognition for this and other work. (Credit: Thomas Bougher, Georgia Tech)