A ceramic-based mechanical pump able to operate at record temperatures of more than 1,400 degrees Celsius (1,673 Kelvin) can transfer high temperature liquids such as molten tin, enabling a new generation of energy conversion and storage systems.

The new pump could facilitate high efficiency, low-cost thermal storage, providing a new way to store renewable energy generated by wind and solar power, and facilitate an improved process for generating hydrogen directly from fuels such as methane – without producing carbon dioxide. Use of ceramic components, normally considered too brittle for mechanical systems, was made possible by precision machining – and seals made from another high-temperature material: graphite.

The research was supported by the Advanced Research Projects Agency – Energy (ARPA-E) and reported in the October 12 issue of the journal Nature. The pump was developed by researchers from the Georgia Institute of Technology with collaborators from Purdue University and Stanford University.

“Until now, we’ve had a ceiling for the highest temperatures at which we could move heat and store it, so this demonstration really enables energy advances, especially in renewables,” said Asegun Henry, an assistant professor in Georgia Tech’s Woodruff School of Mechanical Engineering. “The hotter we can operate, the more efficiently we can store and utilize thermal energy. This work will provide a step change in the infrastructure because now we can use some of the highest temperature materials to transfer heat. These materials are also the hardest materials on Earth.”

Thermal energy, fundamental to power generation and many industrial processes, is most valuable at high temperatures because entropy – which makes thermal energy unavailable for conversion – declines at higher temperatures. Liquid metals such as molten tin and molten silicon could be useful in thermal storage and transfer, but until now, engineers didn’t have pumps and pipes that could withstand such extreme temperatures.

“The hotter you can operate, the more you can convert thermal energy to mechanical energy or electrical energy,” Henry explained. “But when containment materials like metals get hot, they become soft and that limits the whole infrastructure.”

Ceramic materials can withstand the heat, but they are brittle – and many researchers felt they couldn’t be used in mechanical applications like pumps. But Henry and graduate student Caleb Amy – the paper’s first author – decided to challenge that assumption by trying to make a ceramic pump. “We weren’t certain that it wouldn’t work, and for the first four times, it didn’t,” Henry said.

The researchers used an external gear pump, which uses rotating gear teeth to suck in the liquid tin and push it out of an outlet. That technology differs from centrifugal and other pump technologies, but Henry chose it for its simplicity and ability to operate at relatively low speeds. The gears were custom-manufactured by a commercial supplier and modified in Henry’s lab in the Carbon Neutral Energy Solutions (CNES) Laboratory at Georgia Tech.

“What is new in the past few decades is our ability to fabricate different ceramic materials into large chunks of material that can be machined,” Henry explained. “The material is still brittle and you have to be careful with the engineering, but we’ve now shown that it can work.”

Addressing another challenge, the researchers used another high-temperature material – graphite – to form the seals in the pump, piping and joints. Seals are normally made from flexible polymers, but they cannot withstand high temperatures. Henry and Amy used the special properties of graphite – flexibility and strength – to make the seals. The pump operates in a nitrogen environment to prevent oxidation at the extreme temperatures.

The pump operated for 72 hours continuously at a few hundred revolutions per minute at an average temperature of 1,473 Kelvin – with brief operation up to 1,773 Kelvin in other experimental runs. Because the researchers used a relatively soft ceramic known as Shapal for ease of machining, the pump sustained wear. But Henry says other ceramics with greater hardness will overcome that issue, and the team is already working on a new pump made with silicon carbide.

Among the most interesting applications for the high-temperature pump would be low-cost grid storage for surplus energy produced by renewables – one of the greatest challenges to the penetration of renewables on the grid. Electricity produced by solar or wind sources could be used to heat molten silicon, creating thermal storage that could be used when needed to produce electricity.

“It appears likely that storing energy in the form of heat could be cheaper than any other form of energy storage that exists,” Henry said. “This would allow us to create a new type of battery. You would put electricity in when you have an excess, and get electricity back out when you need it.”

The Georgia Tech researchers are also looking at their molten metal pump as part of a system to produce hydrogen from methane without generating carbon dioxide. Because liquid tin doesn’t react with hydrocarbons, bubbling methane into liquid tin would crack the molecule to produce hydrogen and solid carbon – without generating carbon dioxide, a greenhouse gas.

The pump could also be used to allow higher temperature operation in concentrated solar power applications, where molten salts are now used. The combination of liquid tin and ceramics would have an advantage in being able to operate at higher temperatures without corrosion, enabling higher efficiency and lower cost.

The ceramic pump uses gears just 36 millimeters in diameter, but Henry says scaling it up for industrial processing wouldn’t require dramatically larger components. For example, by increasing the pump dimensions by only four or five times and operating the pump near its maximum rated speed, the total heat that could be transferred would increase by a factor of a thousand, from 10 kW to 100 MW, which would be consistent with utility-scale power plants.

This research was supported by the Advanced Research Projects Agency – Energy (ARPA-E) under award DE-AR0000339. Any opinions, findings, and conclusions or recommendations expressed in this material are those of the authors and do not necessarily reflect the views of the funding agency. 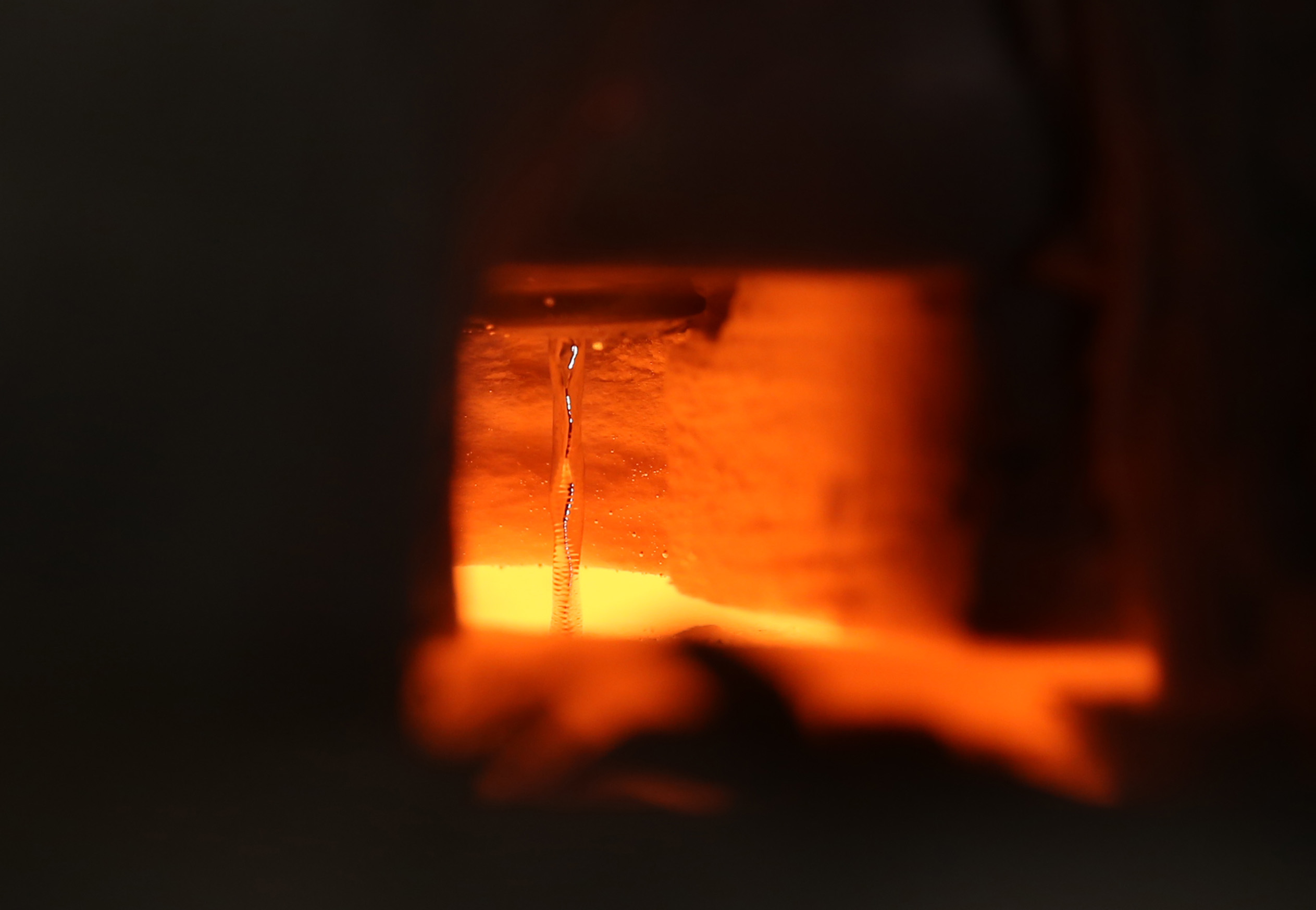 This image shows liquid metal flowing at 1400 degrees Celsius in the laboratory of Asegun Henry at Georgia Tech. Even though all the surrounding materials are glowing, the tin remains reflective and the ripples from the pool of tin below are visible via reflections from the stream. (Credit: Caleb Amy) 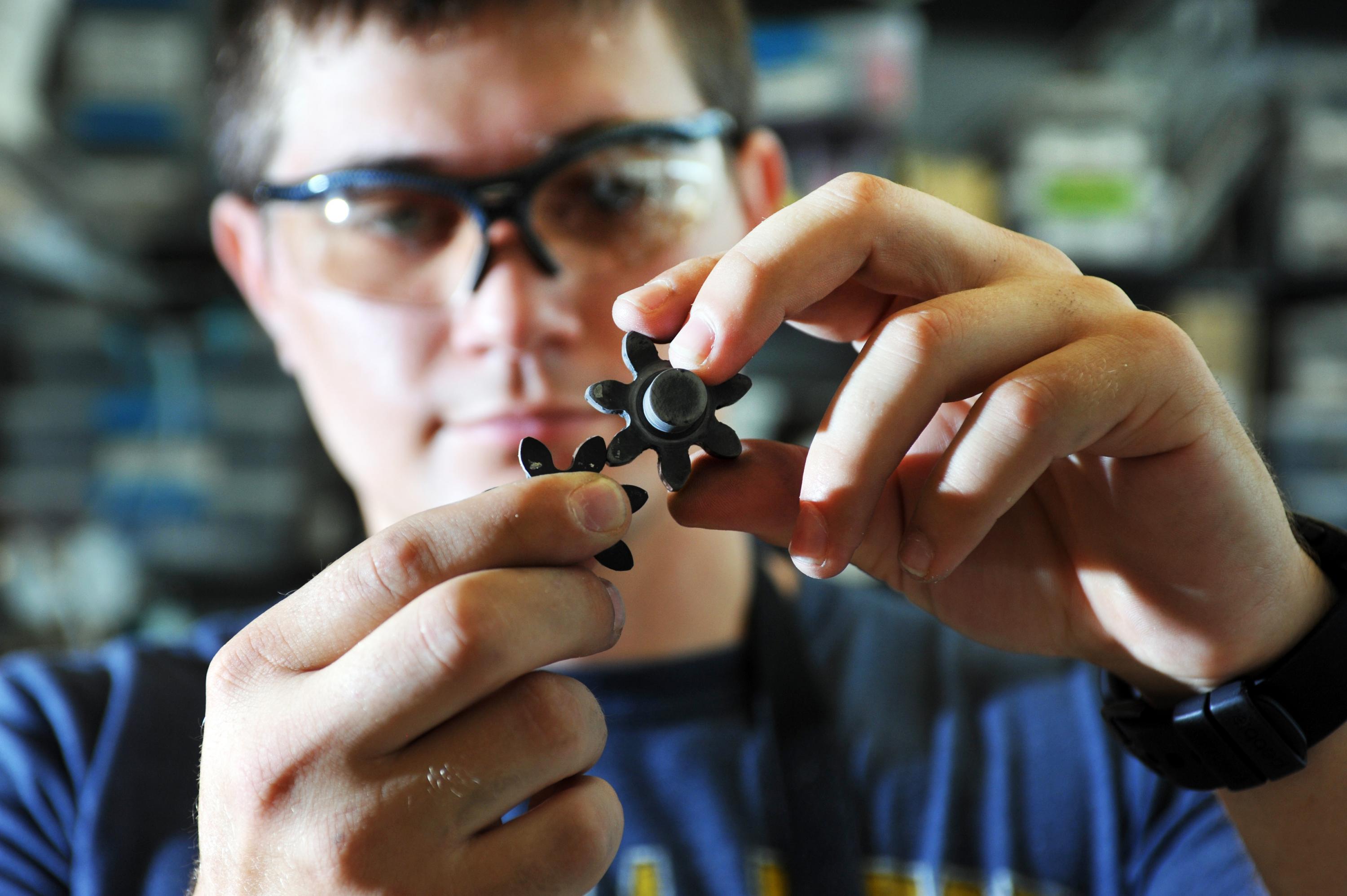 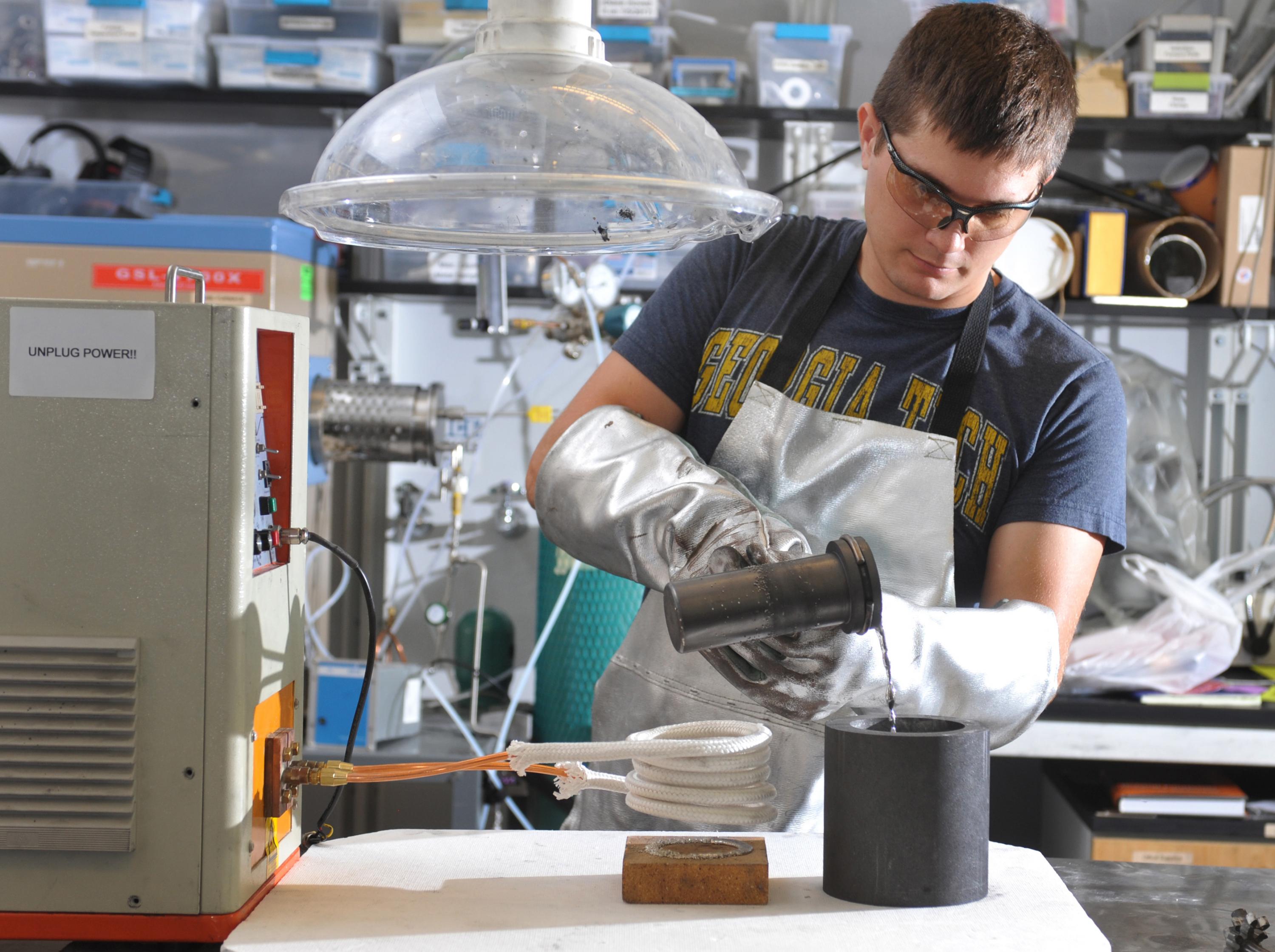 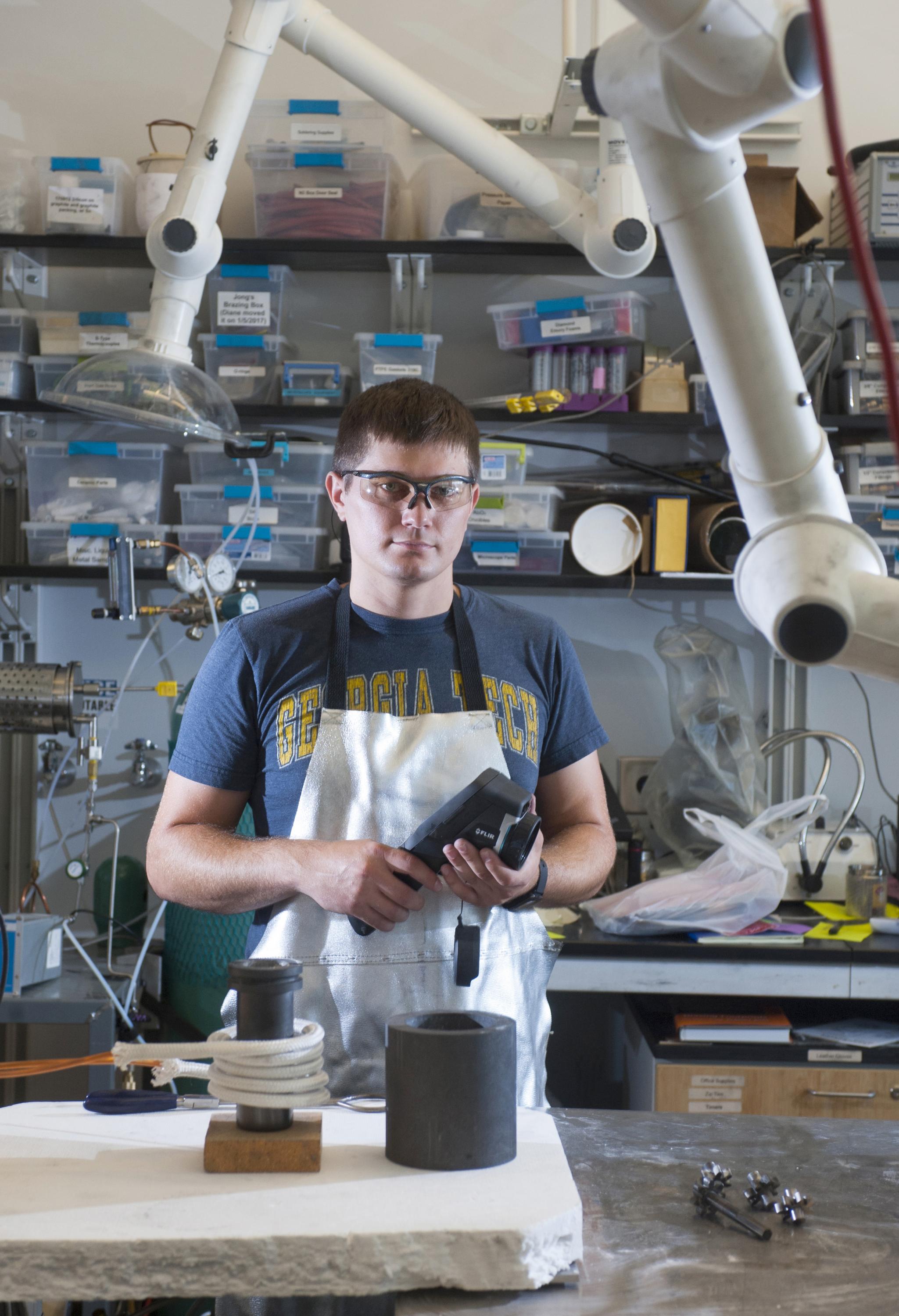