Georgia Tech is home to the longest continuously-organized collegiate hockey club in the southeast.

Hockey in the Deep South?

“‘I didn’t even know Georgia Tech had a hockey team.’ We hear that a lot,” explains Caleb Rudnicki, Georgia Tech ice hockey president.

Not only do we have one, but Georgia Tech is home to longest continuously organized collegiate club hockey team in the Southeast. Students have been lacing up their skates and hitting the ice for the Yellow Jackets since 1973.

The team has seen ebbs and flows – with some good success in the late 1990s ­– but saw dwindling participation in the new millennium.

For the past couple of years, things have been on an upswing.

“We practice once a week on ice and once a week off-ice, with games during three weekends per month,” says Rudnicki.

Many of the current team members have been suiting up and hitting the ice since they were kids. The roster includes several players from Georgia, and from 10 other states including Colorado, Minnesota, New York, and Connecticut.

“I’ve skated since I was three,” says Georgia Tech defenseman Min Kim, a native of Seoul, South Korea. “Hockey was just a natural next step for me.”

Two years ago, the team only had 10 players and finished last in the division. Now, the team has tripled in size and is competing for trophies and titles. Last year, the squad qualified for the American Collegiate Hockey Association national tournament for the first time.

Rudnicki is a fourth-year computer science major who balances his rigorous academic schedule with suiting up as the Yellow Jackets’ goalie.

“We play a competitive schedule and compete for national and regional tournaments every season,” he explains.

Twenty-three of the 30 athletes on the roster are engineering majors, and they are also squeezing in time for high-level hockey competition.

“Everyone is committed to their education. We’ve got guys working on homework on their way to practice,” Kim, a mechanical engineering major, says. “We’re not on scholarship, we’re not getting paid, we’re out here because we love the game.”

These student-athletes are facing off against the likes of Michigan, Northwestern, Air Force, and Notre Dame as well as dozens of universities across the South like Clemson, Duke, Florida, Vanderbilt, and — of course — Georgia.

You might be surprised to know that Georgia has quite a lengthy hockey history.

The National Hockey League’s Atlanta Flames played downtown from 1972 until 1980.  It would be 19 years until NHL hockey returned to Atlanta when the Thrashers took the ice in 1999. The Thrashers were sold in 2011 and relocated to Canada. Currently, the Atlanta Gladiators (formerly the Gwinnett Gladiators) play minor league matches at the Infinite Energy Arena north of campus.

A few hours away there’s another Georgia hockey hotbed. Since 1999, the Savannah Hockey Classic has hosted some of the top collegiate hockey clubs in the South. There’s rarely an empty seat, and the Savannah Civic Center is always rocking.

In front of a sold-out crowd in Savannah, the Jackets took on the archrival Georgia Bulldogs for the 2019 Thrasher Cup.

“The arena is filled all weekend to see us play. It is certainly the best hockey environment I have ever played in during my entire hockey career,” Rudnicki says.

After defeating Florida State 7-3, the Jackets found themselves swarming toward their first Thrasher Cup title since 2012.

Tech came in as the underdog, having lost to the Bulldogs earlier in the season. Georgia entered the finals as the two-time, defending Thrasher Cup champion.

The puck dropped, and within two minutes the Jackets had already scored. The Bulldogs evened it to 1-all, but Tech surged ahead with goals from Michael Leon and defenseman Min Kim. The third goal proved decisive in a thrilling 3-2 victory for the Yellow Jackets.

“I don’t score goals much. The fact that the puck went in — I was pretty surprised,” Kim says.

“It was back and forth the whole time. It’s the first time we’ve beaten them in a while,” Rudnicki says.

Rudnicki powered for 28 saves from his position in the net, and was named player of the game.

Now the Jackets hockey squad is ranked 6th in the American Collegiate Hockey Association southern region rankings. The goal is to qualify for regionals and compete at nationals this year. It’s a 4-0 start to the Spring semester for the guys in gold. They are looking to build on that record. 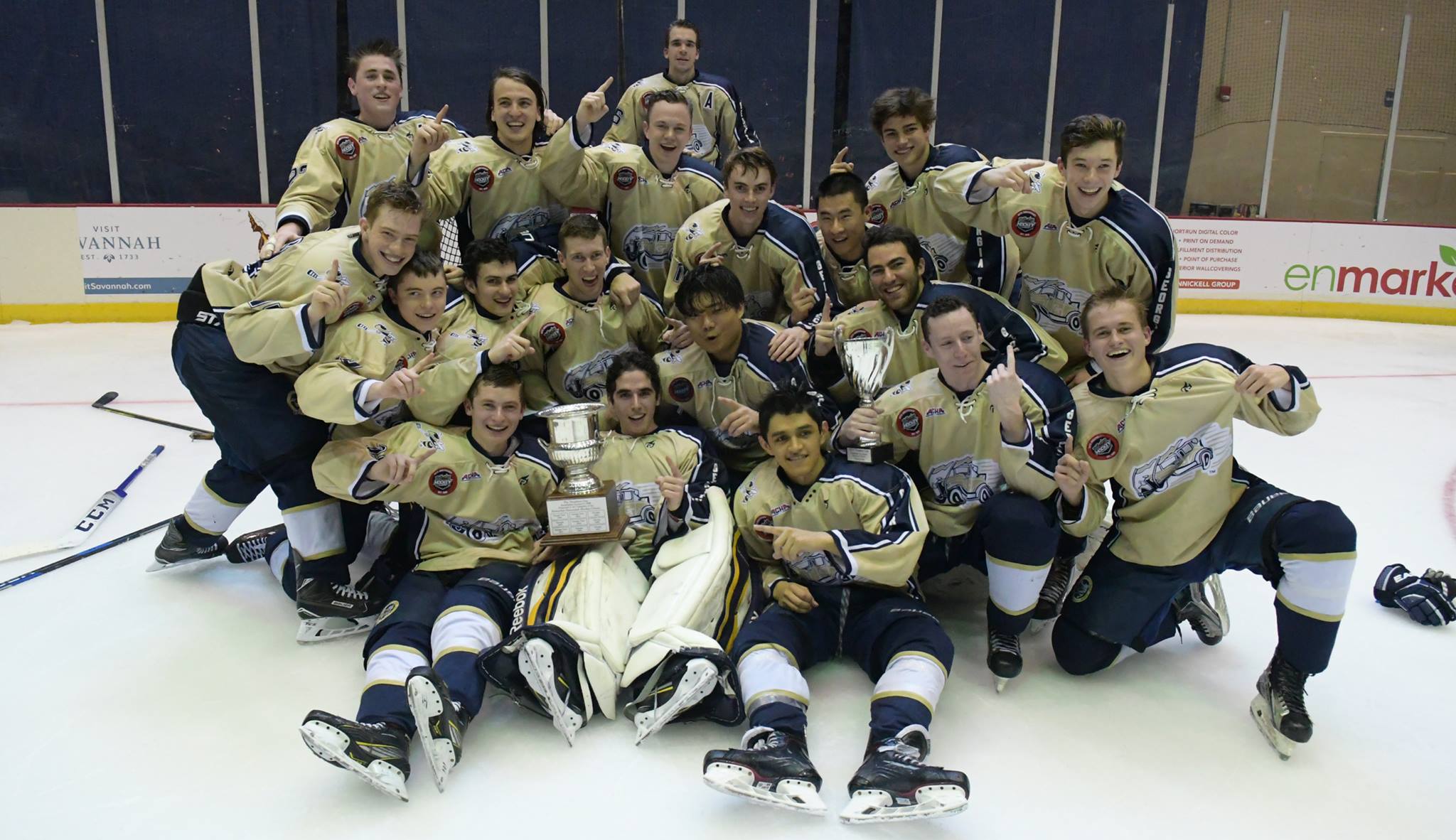 Georgia Tech Hockey has been lacing up their ice skates since 1973, making them the longest-running collegiate club hockey team in the Southeast U.S.