Paula M. Krebs, executive director of the Modern Language Association, spoke along with other humanities scholars. 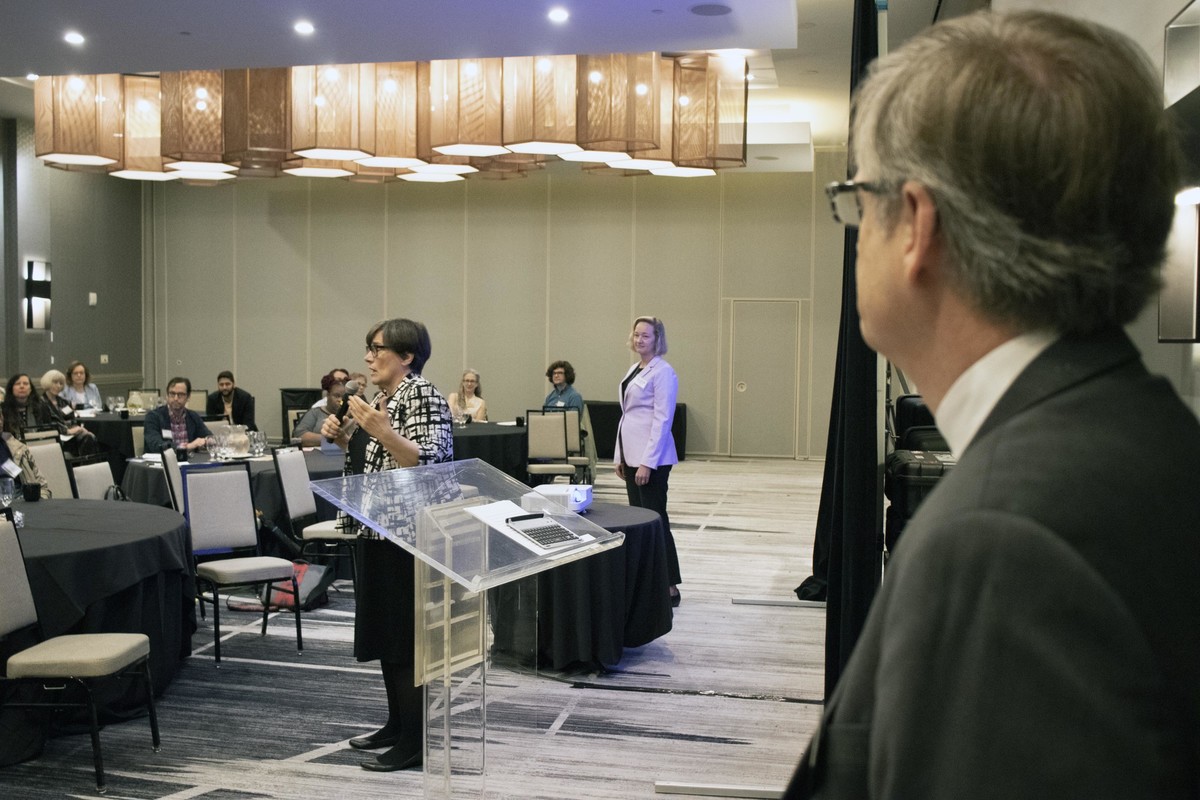 Paula M. Krebs, foreground, executive director of the Modern Languages Association, answers a question during the humanTech symposium on humanistic perspectives at technological universities at the Renaissance Hotel Midtown on April 19, 2019. Anna Stenport, chair of the School of Modern Languages, background, and Richard Utz, chair of the School of Literature, Media, and Communication, foreground, listen.

The symposium was meant to focus the discussion about what it means to be a humanist at a technologically oriented university such as the Georgia Institute of Technology, said Richard Utz, chair and professor in LMC.

“While our participants had work experience at large research institutions, small engineering oriented colleges, and traditional universities with strong science and technology sectors, it became clear very quickly that we didn’t need to switch codes to understand our most important opportunities. They were the same,“ he said. “Terms like innovation, interdisciplinarity, partnership, integration, and collaboration, were front and center among all presentations and responses.”

Presentations and discussions also identified similar challenges, including funding disparities between the humanities and the STEM fields and a traditional view from both humanities and STEM-based scholars that each group is part of a separate academic world.

Despite such challenges, Paula M. Krebs, executive director of the Modern Language Association, noted during her opening address to the symposium how many tech firms and even the Columbia University Medical School, which offers a program in “narrative medicine,” are embracing the skills provided by a humanities education and applying them to technical and scientific disciplines.

“If those graduates are better doctors for studying the humanities, what would a better engineer who is fully engaged in the humanities look like?” Krebs asked.

As it happens, they might look something like many Georgia Tech students, who study or intern abroad at much higher levels than the national average and half of whom voluntarily choose to study a foreign language, compared to 8 percent nationally.

The Ivan Allen College of Liberal Arts, LMC, and the School of Modern Languages also are leading in the fields of language and cultural studies, as Krebs noted.

“Georgia Tech itself is a leader in connecting language and education with career possibilities at the undergraduate and graduate levels,” she said. “The graduate program in Global Media and Cultures, for example, is the kind of program that makes clear the career value of language study.”

That degree, a joint offering of LMC and Modern Languages, and also the Master of Science in Applied Language and Intercultural Studies in the School of Modern Languages, are both meant to give students rigorous training in communication and global leadership, preparing them for careers in international business, non-profits, media, social justice, and education.

Other initiatives are under way at Georgia Tech to help prepare humanities students for interdisciplinary careers in a changing workforce.

LMC and Modern Languages also each have post-doctoral programs for recent humanities graduates. LMC’s Brittain Fellows program seeks Ph.D. graduates with an interest in “digital pedagogy and the cultural studies of science and technology,” while LMC’s Global Languages, Cultures, and Technologies program seeks to foster collaboration across languages, technologies, and global cultures.

Both schools, and faculty from across Ivan Allen College, also are actively engaged in a number of Vertically Integrated Research (VIP) research projects, meant to give undergraduate students the opportunity to participate in meaningful, often interdisciplinary, research projects.

Such program are the product of a spirit of “radical interdisciplinarity” among humanities scholars at Georgia Tech that has allowed such programs to flourish, said Anna Stenport, professor and chair in the School of Modern Languages

“I am very happy and proud to be able to say that there is no crisis of the humanities at the Georgia Institute of Technology,” she told the symposium.

For Utz, the symposium was just the beginning.

“This symposium can only be a first step toward future additional conversations, and the School of Literature, Media, and Communication, together with our partners, will take a lead role in continuing what we started this year,” he said.

Another humanities-related symposium occurred April 25-27. The Atlanta Global Studies Symposium focused on global, regional, and international studies and the United Nation’s Sustainable Development Goals. Discussion centered on collaboration among institutions of higher education, the public and the community, and the K-12 sector in the Atlanta region and beyond through education, research, and outreach.