This year's recipients integrated the University of Georgia and set the stage for desegregation in all of the state's public universities.

When Atlanta natives Hamilton E. Holmes and Charlayne Hunter-Gault stepped onto the University of Georgia campus in January 1961, they also stepped into history.

Their court-ordered enrollment integrated the state’s flagship university and sparked riots. But it also sparked other colleges across Georgia to begin planning their own desegregation — including Georgia Tech, which accepted three black students months later, peacefully and without a court order.

It took many more years for the state’s universities to become equally accessible to students of all races, but it started with Holmes and Hunter-Gault. In recognition of their bravery — and the ripple effects of their willingness to stand up for what was right — Georgia Tech awarded them the 2020 Ivan Allen Jr. Prize for Social Courage on Feb. 5.

Hunter-Gault, an accomplished and award-winning journalist, said she was “blown away” when she found out she would receive the prize this year.

“I never, in all my years, expected to join so many of the pioneers who have received this award, for I know most all of them well and have been inspired by them to try to do my best to be a good servant of the people,” she said. “I also stand on the shoulders of Hamilton Holmes, whose all-too-short life remains alive as an example to all of us to pursue our dreams and not to let anybody turn us around.”

Holmes died in 1995, so members of his family joined Hunter-Gault on campus for a day of events celebrating the pair’s place in history.

“My father, if you knew him, was not the kind of man who was looking to be a trailblazer or make history,” said Hamilton E. Holmes Jr. “He simply wanted to attend the best university that could prepare him for a career as a medical doctor, and, in the late 1950s and early 1960s, that school was the University of Georgia.”

The younger Holmes noted that his father’s place in history has been memorialized in lectures, scholarships, road names, and transit stations. But the one that still makes him choke up is the building on the University of Georgia campus where his father and Hunter-Gault were originally denied admission. That building is now called the Holmes-Hunter Academic Building.

“Regardless of any obstacle you face, you can overcome any challenge through perseverance and remaining focused on your ultimate goal. Stay focused, and don’t let anyone tell you that you’re not good enough, you’re not smart enough, and that you don’t belong,” Holmes Jr. said. “I challenge each of you here today, as we start 2020, to make a plan of what you’re going to do to make your own history. Please do something special with your life.”

As Georgia Tech President Ángel Cabrera told guests at the prize ceremony: “That’s why we have this award — to remind ourselves that change doesn’t just happen, and to provide ourselves with the courage to keep doing the deed.”

The Ivan Allen Jr. Prize honors those who have stood up for moral principles at the risk of their careers, their livelihoods, and even their lives. The college years were not easy for Hunter-Gault and Holmes — it was more than two decades after he graduated before Holmes would even talk about that time in his life, according to his family. Yet both did graduate and went on to have successful and impactful careers.

Hunter-Gault has reported for the New York Times, PBS, NPR, The New Yorker, and CNN, winning Emmy and Peabody awards along the way. She recalled working for an upstart newspaper called the Atlanta Inquirer when she was still in school. Clark College Professor M. Carl Holman and Morehouse College student Julian Bond had founded the paper to cover the growing Atlanta student movement.

“I stand on the shoulders of these giants, from whom I have learned so much and, therefore, to whom I owe so much,” Hunter-Gault said. “The Ivan Allen Prize comes at a time when we journalists need all the support we can get to withstand the outrageous attacks on a profession that has never been more needed than now. So, I plan to do all I can to support my journalist  colleagues, who I know will not be intimidated into silence — and neither will I — in producing what we at the NewsHour used to say was news that could be used by people to make informed decisions about their lives and those of others.”

Hunter-Gault and Holmes are the ninth and 10th recipients of the prize. 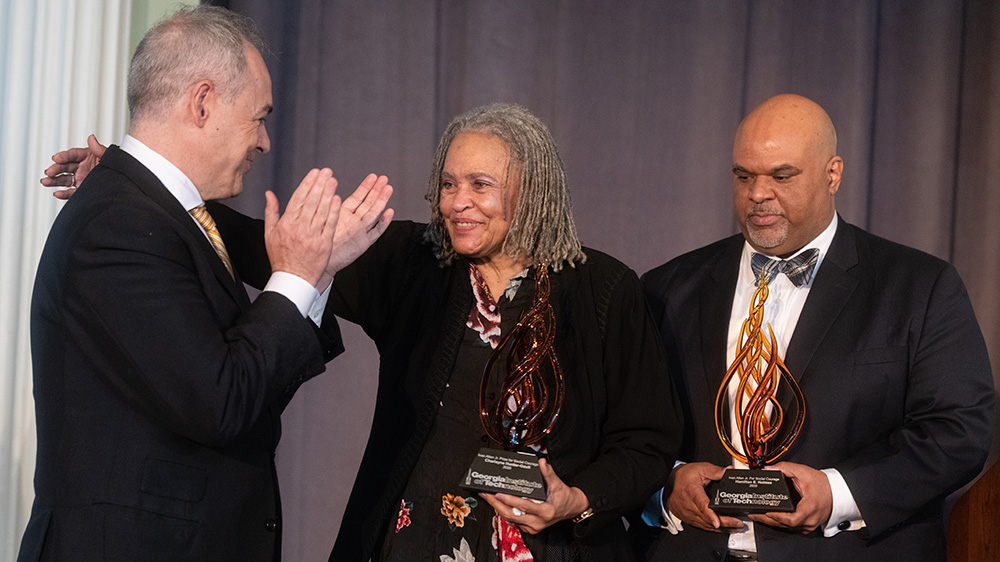