The project, completed by Shatakshee Dhongde in the School of Economics, is the first-ever economic analysis of the industry in the state. 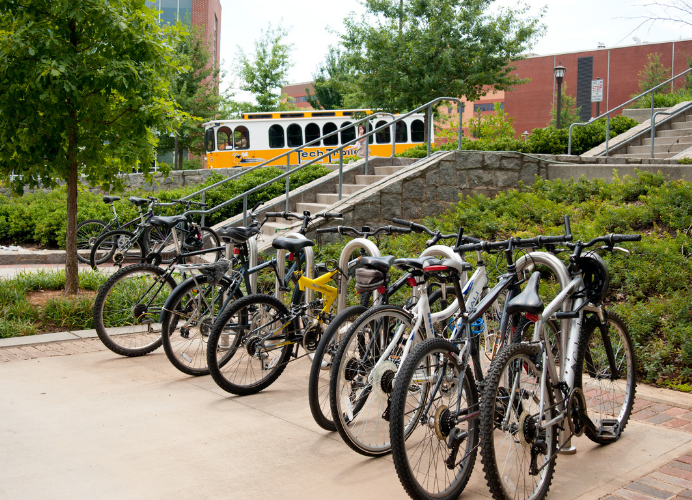 Bicycling-related industries and activities generate an annual economic impact of $500 million in Georgia, according to a new Georgia Tech study conducted for the Georgia Department of Transportation (Georgia DOT). The project is the first-ever economic analysis of the industry in the state.

"Biking is usually promoted as an environmentally friendly and a healthy means of transport, but this report is putting the focus on the economics of it," said Shatakshee Dhongde, an associate professor in the Georgia Tech School of Economics. "Now we can see this activity is having such a big impact on Georgia's economy that we should be paying more attention to it, giving more dollars for investments into these types of alternative transport modes."

To complete the study, Dhongde collected data on three economic activities over the last five years: the sales revenue and employment records of more than 700 bicycling businesses, the construction and maintenance costs of more than 80 bike trails, and the budget, participants, and employees of more than 60 events and 30 bicycling organizations in the state of Georgia.

Her analysis shows that Georgia’s biking industry has a total annual impact of more than $496 million and employs 4,529 people. Breaking down these numbers reveals that bicycle-related businesses generated $361 million, trail construction created $124 million, and events and organizations accounted for $10 million.

“Georgia DOT recognizes the impact the bicycling community has on our state and has worked diligently to support cyclist safety programs, the development of multi-use trails and partnered with organizations such as Georgia Bikes and the Atlanta Bicycle Coalition in an effort to promote safe cycling,” said Andrew Heath, state traffic engineer at Georgia DOT. “With the impressive economic impact the biking industry has on Georgia, we anticipate more growth over the coming years and looking forward to supporting it as best we can.”

Bicycle-related businesses and trail construction each account for about 2,000 jobs in the state, while events and organizations employ another 455 people. In addition, biking in Georgia generated $34 million in annual tax revenue, netting $12 million for local and state economies.

"Even with the limited data and the limited three aspects that we looked into, we could see a significant economic impact," said Dhongde. "But I would say this is a very conservative estimate. If people build on this going forward, we will be able to measure a much larger impact."

Dhongde also saw an upward trend in bicycle use and expects the biking industry in Georgia to continue to grow in the coming years.

“People are going to need this information if they want to justify any type of investments or improvements in the bicycle infrastructure in Georgia, so there is definitely a need to conduct a rigorous impact analysis for any new project,” said Dhongde. The detailed analysis in her report will guide others to calculate the costs and return on investment for new biking projects in the state, such as building a bike lane in Atlanta or expanding a trail.

Overall, the study shows that biking in Georgia has a significant economic impact on the state.

“If there are half a billion dollars in output, that says a lot for this industry,” says Dhongde.

Read 'The Economic Impact of Bicycling in Georgia' by Georgia Tech economist Shatakshee Dhongde, published by the Georgia Department of Transportation 2021.