It was in the middle of a campsite in Italy where Emily Weigel learned a lesson from a bunch of ants.

The biology major had been conducting research in Germany when she was invited to Italy for fieldwork with a research group that included a renowned insect expert. Though not insect-savvy herself, Weigel jumped at the chance to learn from the best. She had just set down her things at the campsite when hordes of red ants began to crawl on her legs.

“I freaked out, ran away, and jumped in the lake,” she said. “No one knew what was wrong.”

Eventually she and her colleagues broke the language barrier to identify that Weigel thought the ants were venomous because they look like a variety in the southeastern U.S. with a particularly painful sting. As it turned out, these particular Italian ants were harmless.

“We got into a discussion about ecology, awareness of your surroundings, and how what you’ve been exposed to matters in how you respond to things,” she said.

Many students learn similar lessons when studying abroad: By expanding the scope of their world, they become better students, learners, and researchers, and ultimately employees, colleagues, and friends.

Graduates of the program must spend 26 weeks outside the U.S. through an internship, study, or research abroad program, and must develop proficiency in a foreign language. The time abroad can be accomplished through one yearlong program or two separate stints. 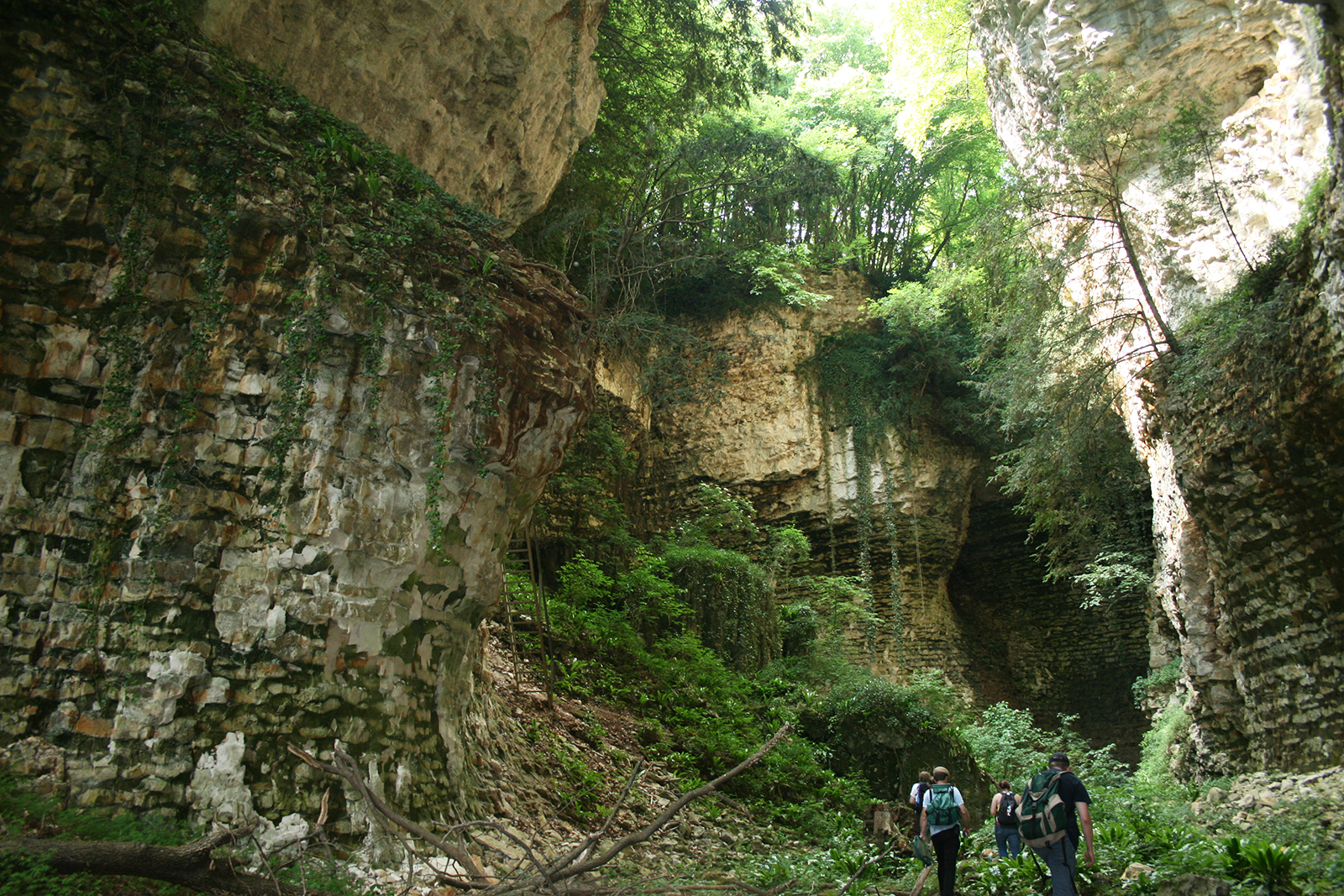 The site in Italy where Weigel encountered what she thought were dangerous ants. Photo courtesy of Emily Weigel

Some students, like Julia Fraser, begin college knowing that they want to go abroad.

“My mom spent a year in Italy, so she advocated for it,” said Fraser, who graduated in May with a degree in chemistry.

Fraser spent a year in Spain at the University of Granada, arriving a month early to shore up her language skills. There, she took several of her required chemistry courses, as well as a few electives — all in Spanish.

“No matter how good you think you are, you’re still surprised at how hard it is,” she said. Thanks to help from her new Spanish friends, English-language textbooks, and visiting professors during office hours, she was able to handle the course load.

Spending a year in one place let Fraser immerse herself in the culture, both academically and socially, and gave her a home base from which to travel. She visited nine other countries, and even played on the University of Granada’s club volleyball team. 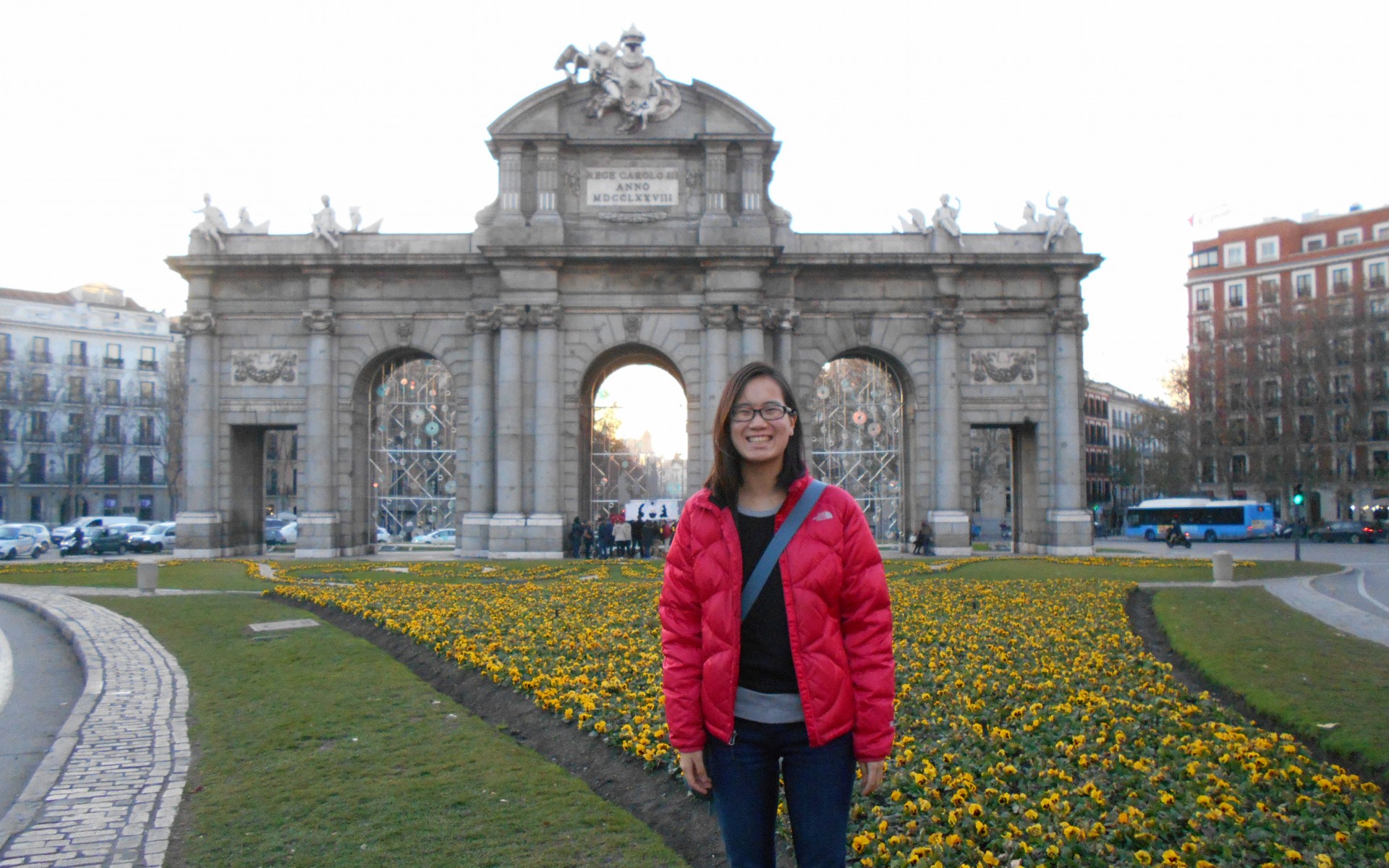 Fraser on a visit to Madrid, Spain. 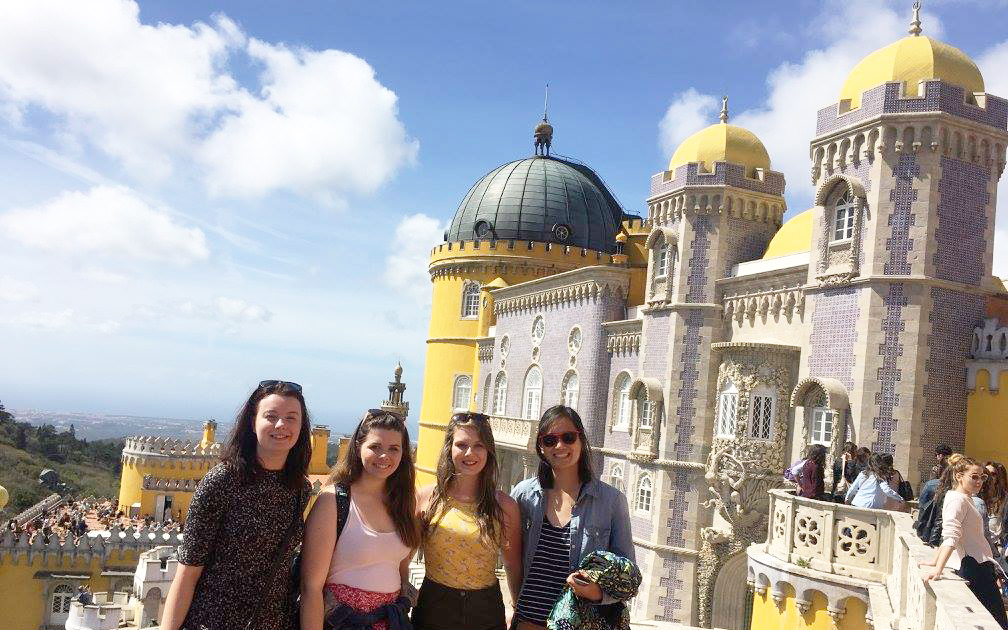 Fraser (at right) on a trip to Portugal with friends. 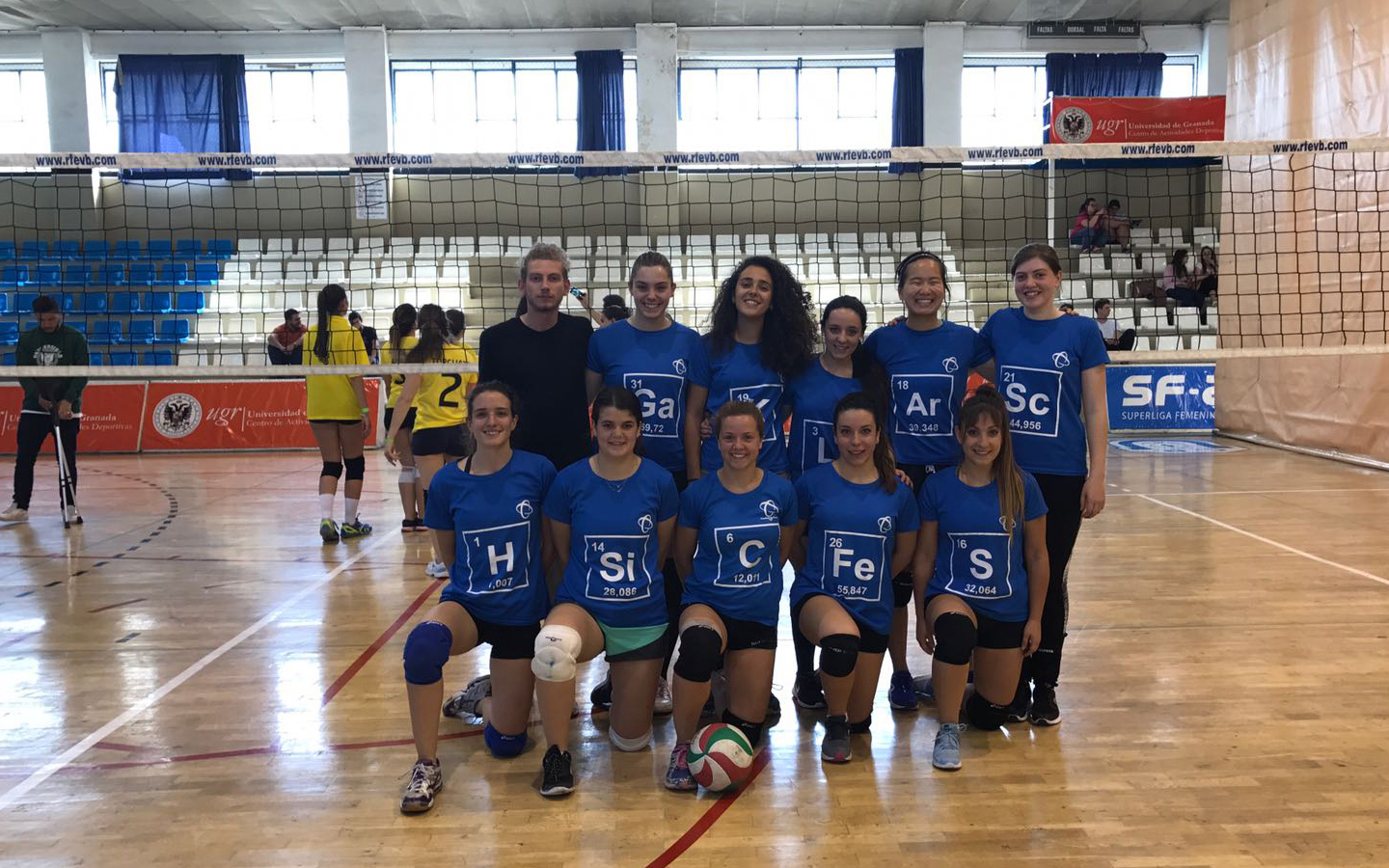 Julia Fraser (second row, second from right) with her volleyball team at the University of Granada.
Photos courtesy of Julia Fraser

For Craig Raslawski, a recent computer engineering graduate, international study was always part of his plan, as was pursuing language classes. The International Plan became a clear choice, and he spent his first semester abroad with Tech’s China Summer Program.

“If I hadn’t chosen the International Plan, I would not have been driven to travel abroad two more times — I would have been happy with my first experience,” Raslawski said. “But because I needed more time in another country, I ended up doing the China LBAT (Language for Business and Technology), and then later an internship in Germany. Each experience was completely different, and I wouldn’t have grown as much if I had only participated in one of those programs.” 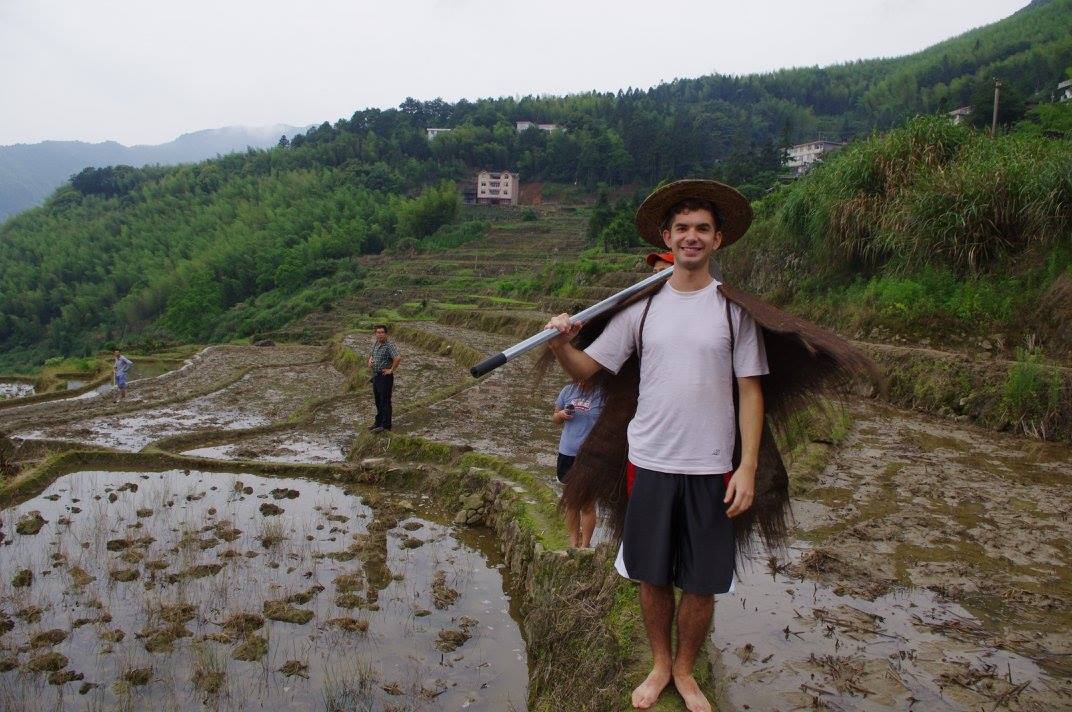 Why It’s Worth It

Raslawski now works for the Georgia Tech Research Institute and will start a master’s program in cybersecurity this fall. He’s already found the lessons from his international experience to be valuable in everyday life, particularly in how he interacts with others.

The immersive language courses were a big part of that. By design, they encourage students to interact with local people in other countries and learn about their lives. “I will always encourage students to join the IP if they intend to study abroad and are willing to learn a language,” he said.

Raslawki's study abroad group from the 2014 China Program at the Great Wall of China.
Photo courtesy of Craig Raslawski 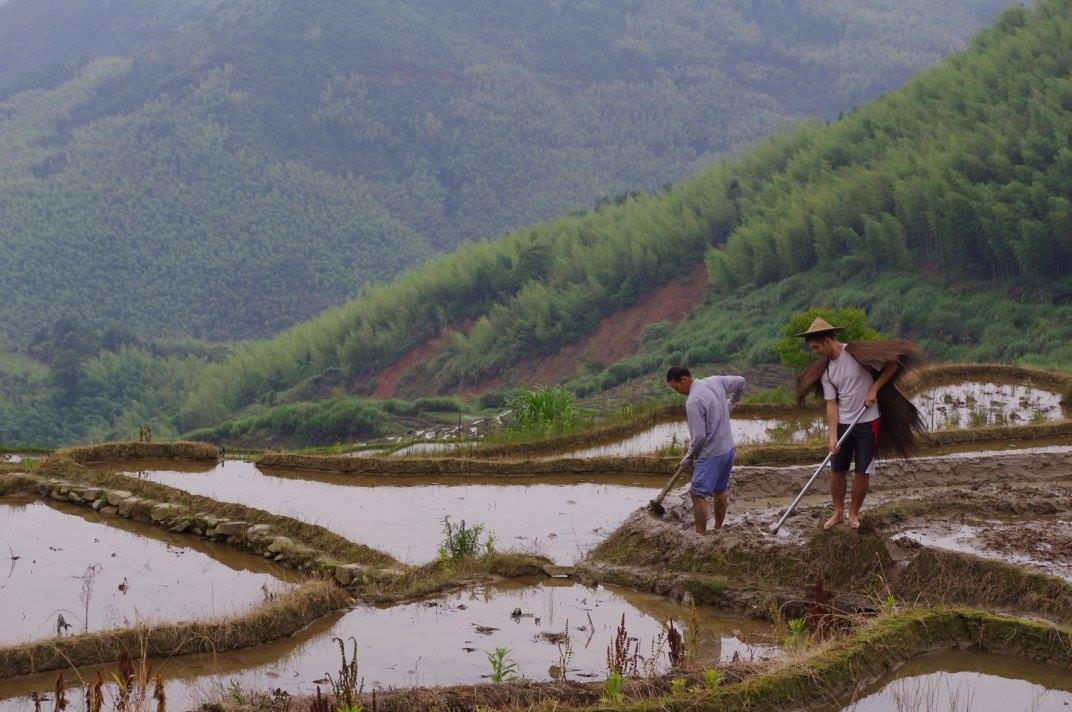 Though at times Julia Fraser was homesick or lonely, she grew close with her host family — where she had three “siblings” in high school and college — and also highly recommends the IP experience.

“If you’re already planning to study abroad, you should do it,” she said. For those not wanting to commit to one place or to the host family experience, she suggested doing a group program first. Then, pursue an exchange during your next study abroad experience.

For Emily Weigel, who earned her bachelor’s degree from Georgia Tech in biology and is now an academic professional in the School of Biological Sciences, spending time abroad outside a structured group was challenging but essential.

“I figured out from talking to other people who went abroad that if I went for an extended period of time and didn’t go only with other Americans, I would get a lot more out of the experience,” she said. She ultimately spent her entire third year in Germany, conducting research at two different universities.

The experience proved invaluable for her career path. She went on to receive dual Ph.D.s from Michigan State University — one in zoology and ecology, and another in evolutionary biology and behavior.

“I worked with a professor in Munich teaching animal behavior, which got me working in the zoo, and that’s kind of where I found what I do now,” she said. 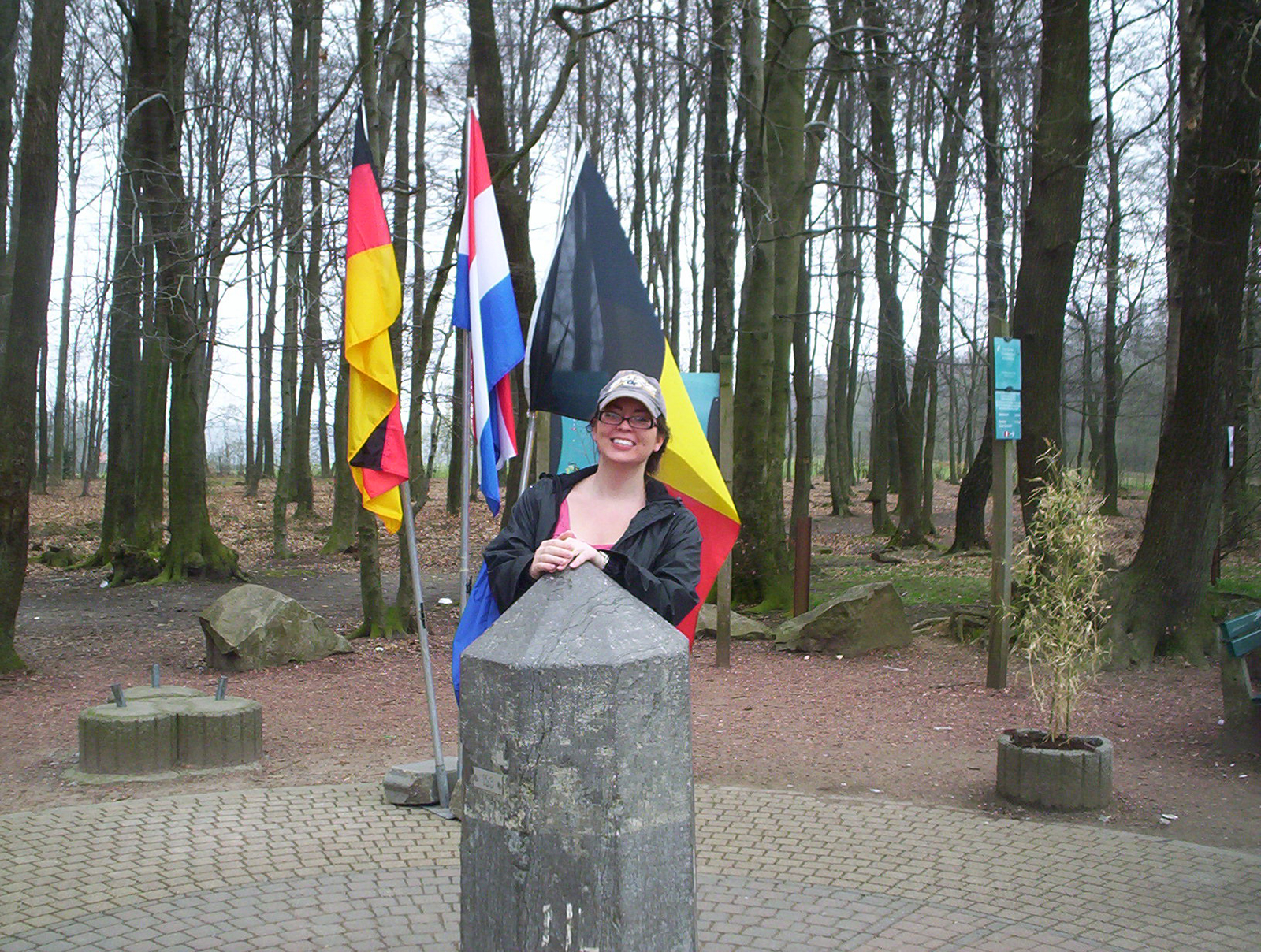 As an undergraduate conducting research in Germany, Weigel visited the Dreilaendereck, where the countries of Belgium, the Netherlands, and Germany meet. Photo courtesy of Emily Weigel 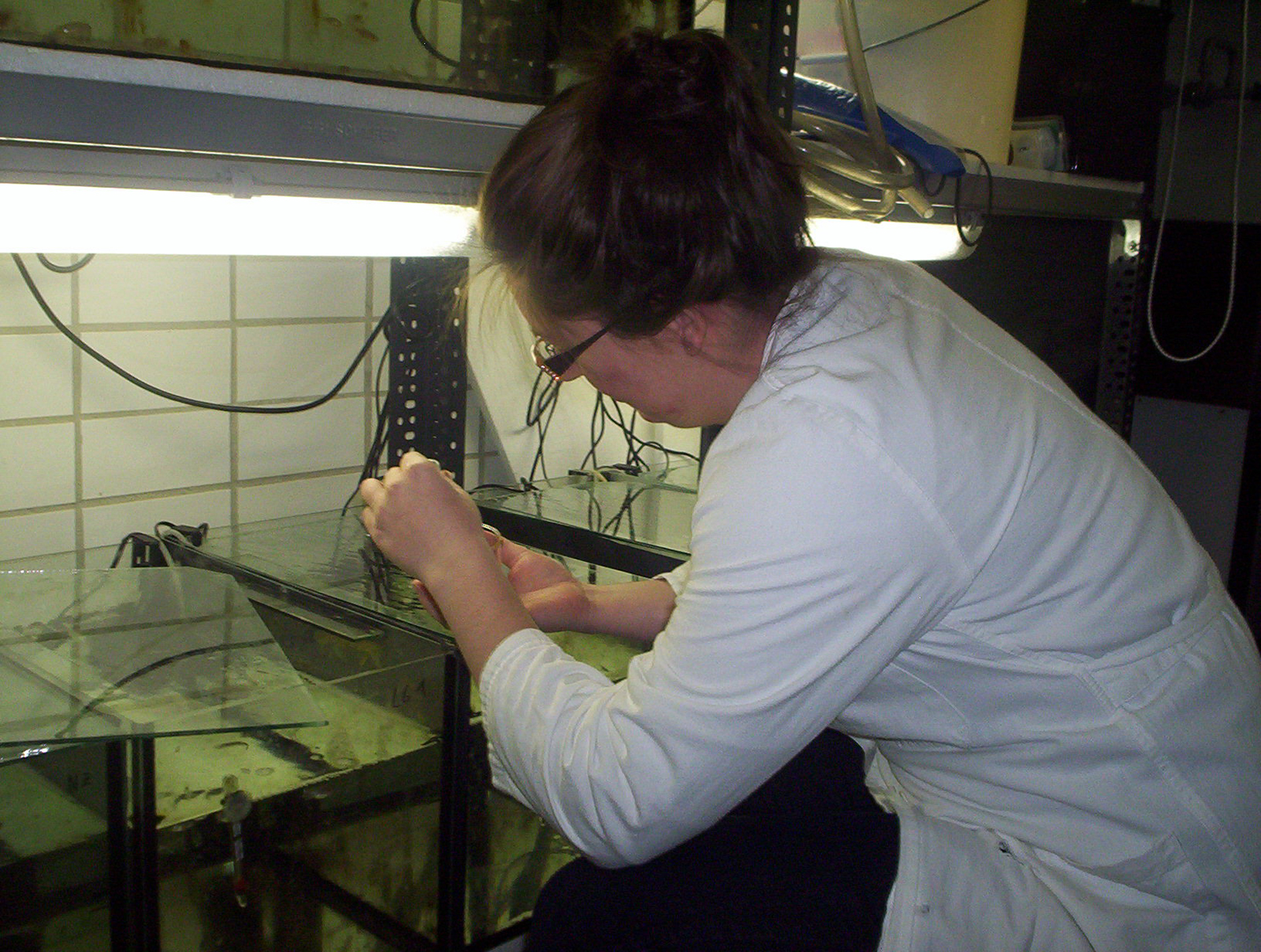 Now, Weigel is an academic professional in the School of Biological Sciences. Her research and areas of expertise include ecology, evolution, behavior, and STEM education. Photo courtesy of Emily Weigel

That’s Weigel’s advice. It’s been 10 years since she studied in Germany, but now, in her capacity as advisor to undergraduates in biological sciences, she is encouraging them to consider the International Plan.

“There’s a lot of support for international study, good resources online, and financially it may even be cheaper than regular tuition,” said Weigel, who found the latter to be true in her case. “People come into Tech with class credit and want to graduate quickly, but faster isn’t necessarily better. You could be missing out on a lot of things that don’t need to cost an arm and a leg, and that could set you on a path you didn’t know about.”

For students interested in pursuing the International Plan, or other international opportunities, the Office of International Education will host information sessions during the first few weeks of the school year.

“The IP is very attractive to prospective Tech students, and some students report in their application to the program that they selected Georgia Tech over a peer school because of the strength of its international programs,” said Jennifer Evanuik Baird, director of the Global Internship and International Plan programs. About 225 students pursue the International Plan each year.

Learn more about the program at oie.gatech.edu or at an upcoming information session: 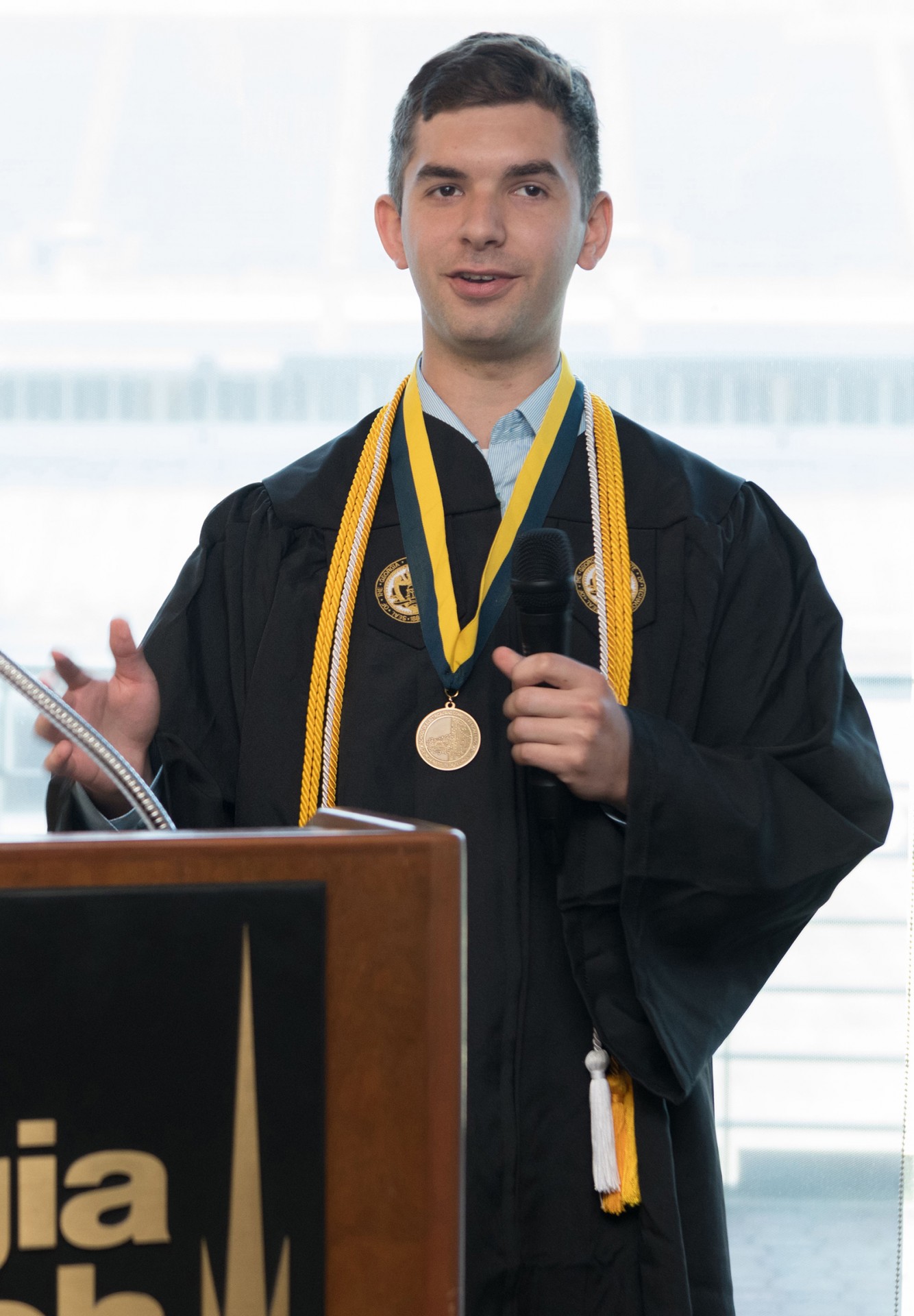 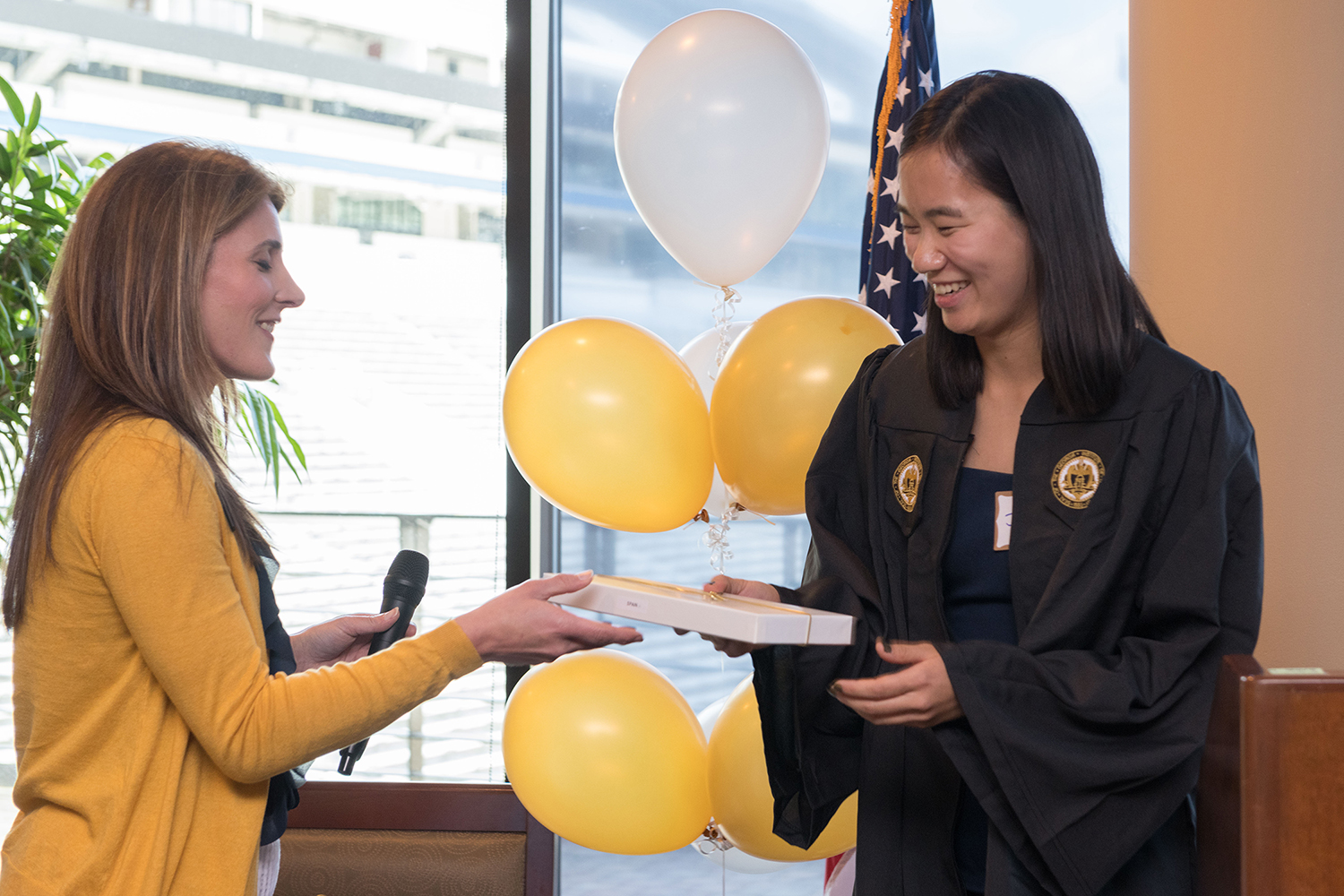 Jennifer Evanuik Baird gives Julia Fraser her country stole at a ceremony honoring Spring 2018 International Plan graduates. Each graduate receives a stole that represents a country where they spent a term abroad. 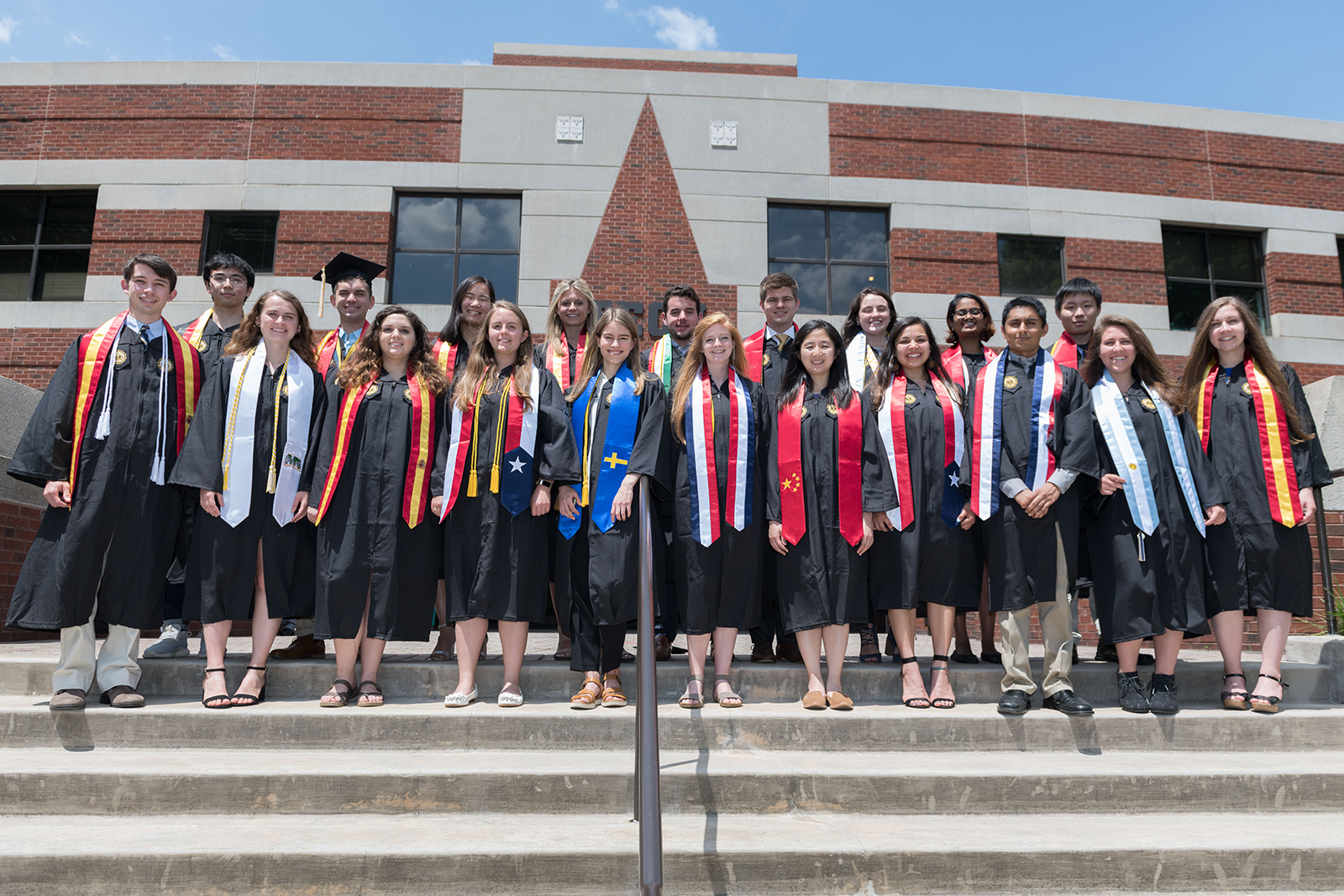 Spring 2018 graduates pose with their country stoles in front of the Wardlaw Center on North Avenue.