Georgia Tech’s Eye on the Sky Is Having a Birthday

As a doctoral candidate in astronomy at the University of Michigan in the 1980s, James Sowell regularly peered deep into the stars, trying to unlock the universe’s secrets.

Was the universe trying to send Sowell a message of its own at the same time?

A fellow graduate student was having some difficulty in class, and another student said it was because she didn’t come from a strong astronomy school. “She came from Georgia Tech,” Sowell remembers being told.

As Sowell’s lucky stars would have it, he landed on Georgia Tech’s faculty. Not only does he teach astronomy, he also established an astrophysics certificate for non-physics majors who want to enhance their educational resumes.

More important for Tech, Sowell navigated the maze of bureaucracy and fundraising that gave rise to the Georgia Tech Observatory in 2007. Sowell is its director, and the Observatory – which hosts more than 1,500 visitors each year – is celebrating its 10th anniversary on April 6.

The day has special meaning for Sowell, who says his work to get the observatory built was sparked by that not-so-stellar review of Tech’s astronomy offerings back in the 1980s.

“I’m going to make certain that is not said about my institution anymore — that Tech students are struggling because it’s not strong in astronomy,” Sowell says.

Marcus Holzinger says Sowell has delivered on that promise. An assistant professor with the School of Aerospace Engineering, Holzinger helped pay for the Observatory’s current state-of-the-art telescope.

Sowell “really is an unsung hero” in advocating for the Observatory and using it for public outreach, Holzinger says. “He did a super job putting all that together and getting the facility up and running.”

“We really do appreciate the Observatory,” says third-year physics major Darian Bender, who is also president of the Georgia Tech Astronomy Club. “It’s actually one of the best telescopes in the Southeast in terms of resolution. It’s exciting to have that on campus.” 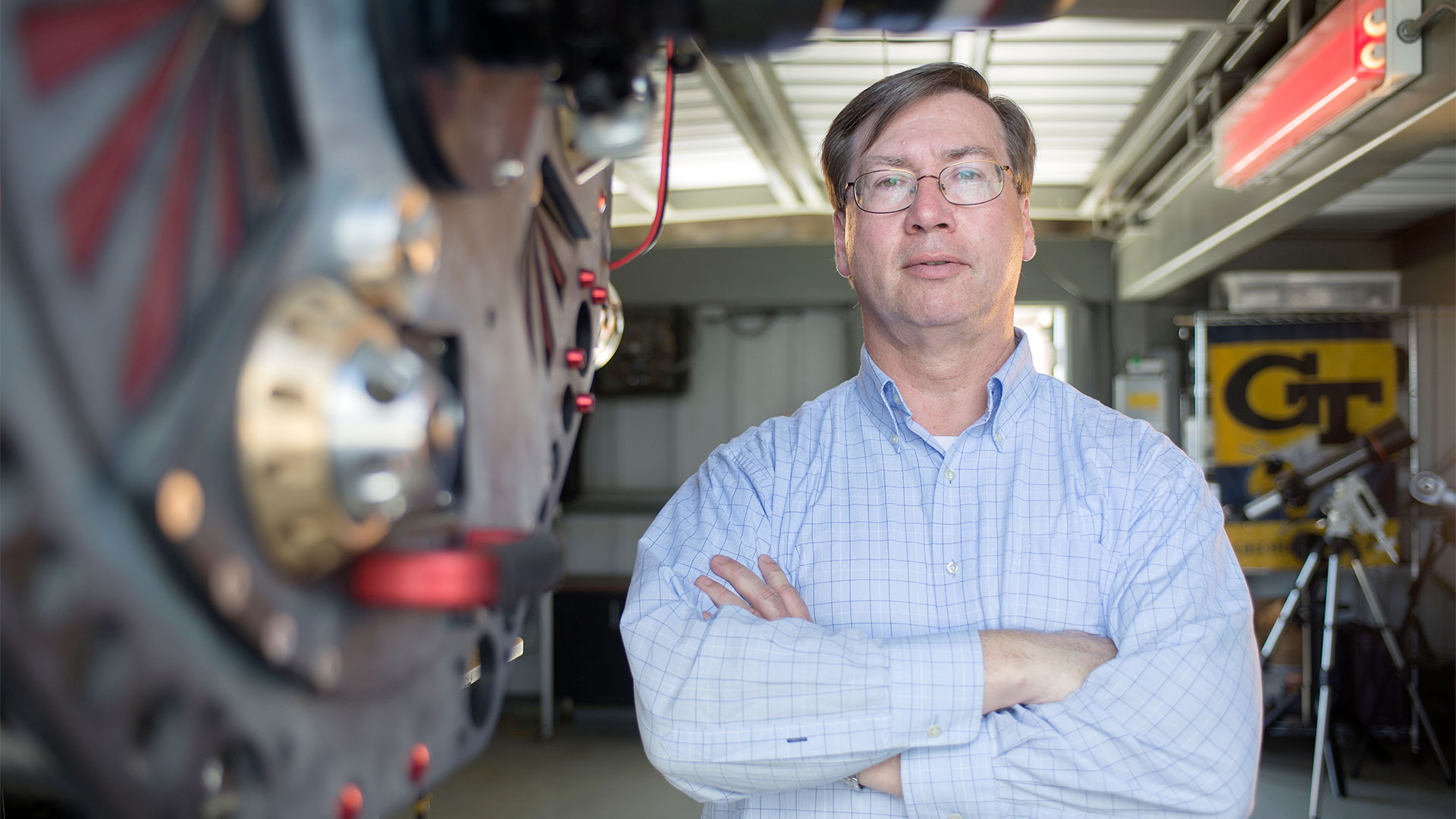 From Tenure Track to Tracking the Sky

“I got out of the tenure track realm,” he says. “I realized I was meant to be an astronomer.”

Sowell started teaching astronomy courses in 1992, and transferred full-time to the School of Physics in 1999. He knew that having a telescope and observatory on campus would boost undergraduates’ interest in astronomy and in possibly taking more astrophysics courses.

It would also be effective public outreach, something that Sowell says is in every astronomer’s blood.

“I know I’m opening the visitor’s minds,” Sowell says. “The best part of my job is hearing them squeal when they’re looking through the telescopes. Then I know they’re seeing something they haven’t seen in a while, or maybe have never seen before.”


Before that outreach could happen, Sowell had to find money to pay for a telescope and a place to house it on campus. When it comes to metro Atlanta observatories with large telescopes, Georgia Tech competes with Fernbank Museum (36-inch telescope), Agnes Scott College (30-inch), and Emory University (24-inch).

Sowell secured about $20,000 for a 16-inch Meade telescope from the Technology Fee fund. Construction of an observatory took longer. The roof of the Howey Physics Building was found to be the best location, but vibrations, heat generated by the large brick building, and the size of the rooftop enclosure had to be addressed.

In 2005, Sowell asked Northrop Grumman if it would be interested in funding observatory construction. According to Sowell, his email was forwarded to someone else in the company with the note, “Do we do anything with Georgia Tech?”

The reply, Sowell said, was, “Where do you think half of our aerospace engineers come from? Don’t you realize I recruit there just about every month?”

Hello, $25,000! Construction began soon after and would take nearly two years. The Observatory marked its grand opening on April 26, 2007. 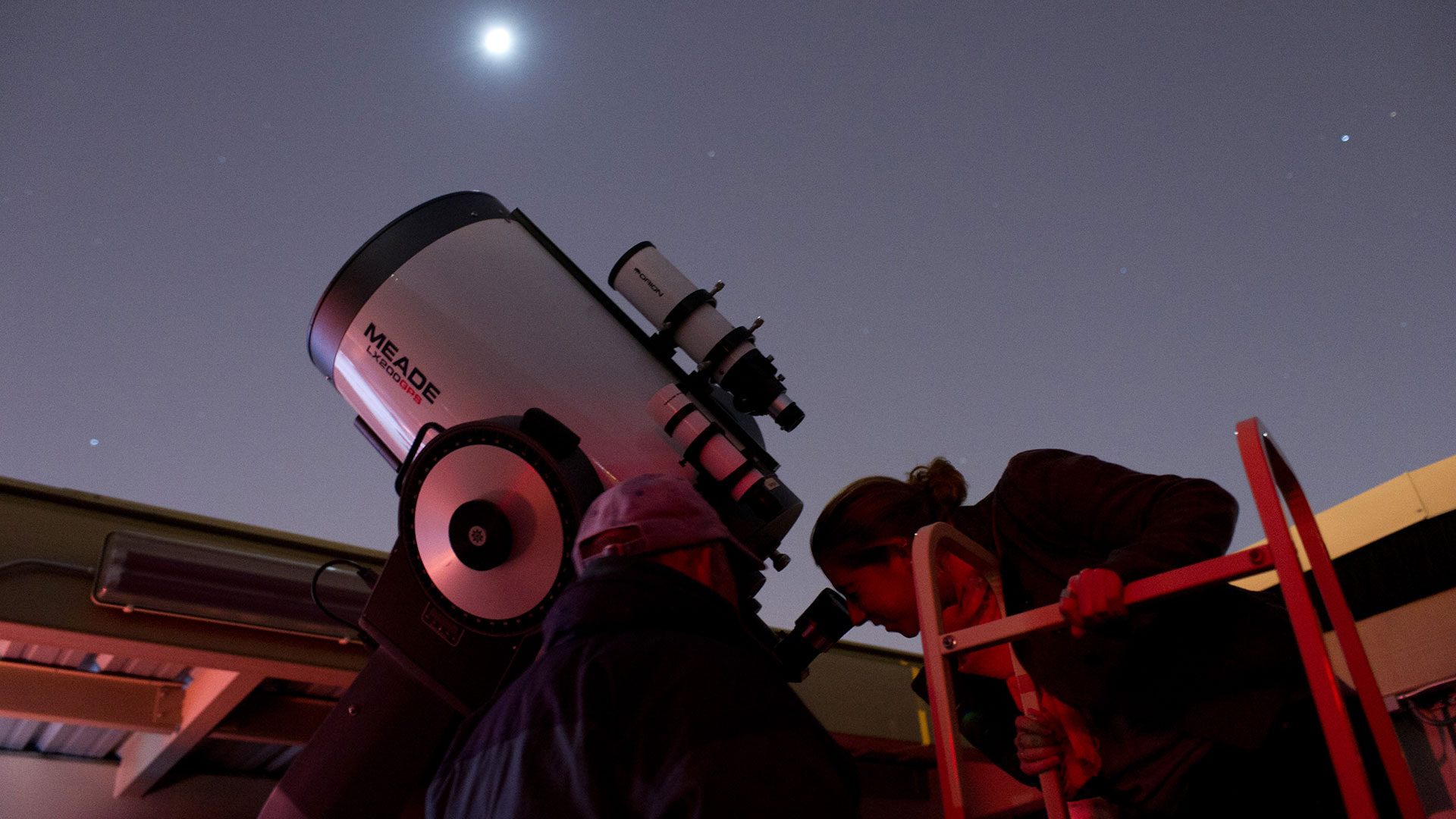 A Better Telescope for Research and Outreach

Marcus Holzinger had just arrived at the School of Aerospace Engineering in 2012 when he met Sowell to inquire about installing a bigger, better telescope in the Observatory. Holzinger needed it for his research into observations of Earth-orbiting space debris. “Not a whole lot of universities or non-military places have systems capable of tracking these things,” he says.

The 16-inch Meade was great for wowing crowds with close-ups of Moon’s craters, Saturn’s rings, and various other bright objects, but “it just wasn’t going to cut the mustard for tracking various space objects,” Holzinger says. “So I was faced with this wonderful situation where there was already an observatory facility; Jim is easy to work with, and we came quickly to an agreement.”


In 2014, a 20-inch Officina Stellare replaced the 16-inch Meade as the Observatory’s main telescope. A donated 12-inch Meade scope is also on the roof, used for spillover crowds.

“When it comes to the telescope, we went from a Toyota to a Jaguar,” Sowell says. “And then there’s the mount. There we went from a Volkswagen to a Rolls-Royce.”

Video: Timelapse of the 2014 installation of the Officina Stellare telescope


“It really differentiates the work we do from other institutions because we’re no longer validating algorithms that we’re coming up with in simulations,” Holzinger says. “We’re taking actual observations of actual objects. We were one of the first non-military academic institutions that built something specifically for tracking low-Earth-orbiting objects.”

With Holzinger as partner, the Observatory is truly a Tech team effort, not just of two schools, but of two colleges. Holzinger’s students, meanwhile, are highly sought after by the Air Force and private sector. “The students can barely graduate without two or three offers,” he says. 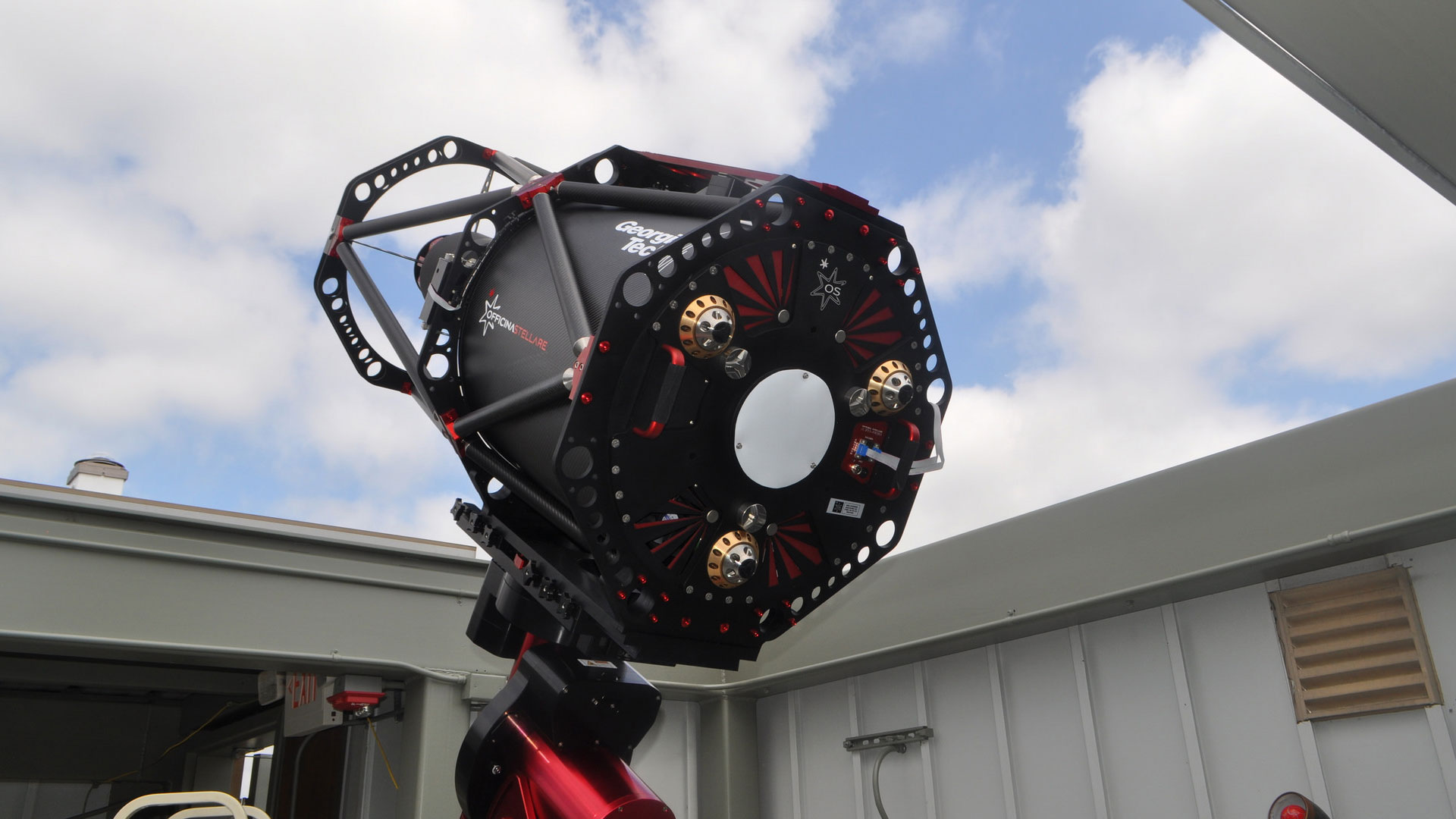 The Aloha Telescope and Planning for a Planetarium

When the weather is clear, the Observatory averages about 40 visitors each night, Sowell says. The Observatory is open on Public Nights, held on Thursday evenings on most months of the year; on Monday evenings every other week for astronomy students; on alternate Mondays for the Georgia Tech Astronomy Club; and for private visits such as Scouting groups, school classes, and special events.

“I want to grow the outreach,” Sowell says, and the Aloha Telescope will soon help achieve that goal. Thanks to a joint effort with the Air Force, an 11-inch Celestron on the island of Maui will allow Georgia public school classes to learn more about astronomy by letting teachers remotely control the telescope. Students will see images via a video feed.


“The issue with astronomy is that kids in the classroom can’t see celestial objects during the day,” Sowell says. “A sense of discovery is what I want to give young children.”

Another unfinished business item for Sowell is a Georgia Tech planetarium. He tried to get one built three years ago but couldn’t find a building that would support a 30-foot dome for the facility. So the dimensions may be scaled back, but Sowell wants to keep pushing the idea.

“Planetariums are a very immersive experience” that could provide several uses for other schools on campus, Sowell says. “You can have fish swimming around you or DNA coils coming to life. You can have film festivals. It can be a wonderful learning environment, not just for astronomy. It would be a tremendous asset.”

A Day to Celebrate

On April 6, the Georgia Tech Observatory will commemorate the facility’s 10th anniversary with a day of special events. All events are free: