“I couldn’t be happier.” The response is immediate and emphatic when I ask Dorothy “Tod” Berks how she feels about her late husband’s iconic sculpture of Albert Einstein finding a permanent home at Georgia Tech. 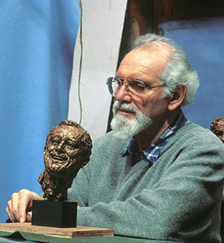 Robert Berks (1922-2011), a renowned American sculptor, and his wife spent two memorable days in 1953 at the Princeton home of the Nobel Prize-winning physicist. On the first day, Berks didn’t bring out his sculpting tools, choosing instead to simply sit and talk with Einstein in his quiet study.

By the time they left, she recalls, “Bob had [Einstein’s] head in his own head. He knew exactly what he was going to do.” The sculpture was completed in three sittings on the second day.

In that short, intense time, Berks created the lasting image of the extraordinary scientist and humanitarian. Upon his return to New York, Berks captured in a small model his recollection of the total simplicity of Albert Einstein at work, seated with a pen and a pad of paper as his mind encompassed the universe.

In April 1979, that small model was fulfilled. On the grounds of Washington, D.C.’s National Academy of Sciences, facing the Lincoln Memorial, the 24-foot seated Einstein Centennial Monument was dedicated. At Einstein’s feet, set into black granite, a chart of the universe records the exact date of the occasion.

To celebrate the new century, the Israel Academy of Science and Humanities commissioned Berks to recreate a 12-foot monument, suitable to the scale of their institution in Jerusalem. Dedicated in December 1999, the stars at Einstein’s feet commemorate the exact position of the skies on the birth of the State of Israel. 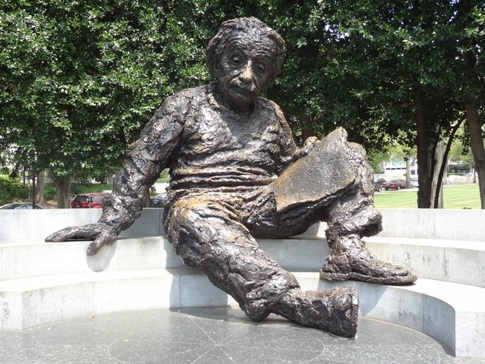 The Einstein Centennial Monument at the National Academy of Sciences in Washington, D.C.

A second 12-foot bronze was cast in 2002, and loaned to the American Museum of Natural History as a centerpiece of their comprehensive exhibition on Einstein.

Taking on 'A Life of Its Own'

At the end of the yearlong exhibit, Einstein returned to the 30-foot steel turntable where it had been created, outside Berks’ Orient, New York, studio.

And there it remained, until Atlanta investment manager and chief investment officer of Equity Investment Corporation, Jim Barksdale, in search of Berks’ Robert Kennedy sculpture, picked up the phone and dialed the Berks’ number.

“We had a very long conversation,” recalls Barksdale. “She invited me to come visit, and I did,” he says, with a note of awe.

Berks gave him a tour of her late husband’s studio, brimming with sculptures of American presidents, political and cultural luminaries, and even Hollywood celebrities like Frank Sinatra.

Barksdale came upon the Einstein bronze outside the studio and instantly recognized its significance.

Berks told him that she had fielded offers for the piece over the years, but none felt like the right fit. “She really wanted to find a home that properly represented her husband’s legacy.”

Barksdale returned to Atlanta and recounted his visit to his neighbor and friend, John Buck, professor emeritus in Georgia Tech’s School of Electrical and Computer Engineering.

In turn, Buck relayed Tech’s recent efforts to build a robust arts program — noting the 2013 unveiling of the Engineered Art installation, a permanent eight-piece exhibition of international sculpture. An ardent admirer of Einstein, he and Barksdale approached the Georgia Tech Arts Advisory Board with a proposal to bring the Einstein piece to Tech.

“It took off like wildfire,” says Barksdale. “Everybody was so excited about it. It really took on a life of its own.”

Very quickly, that excitement translated into raising the funds to purchase, transport, and install Einstein on the Georgia Tech campus. Barksdale made the lead gift, soon followed by dozens of other friends and alumni — among them, the Class of 1966, which made a six-figure commitment that far exceeded its initial class project goal. The Arts Advisory Board provided supplemental funds.

The monument now sits in a shaded corner of the Georgia Tech campus. At the foot of the sculpture is engraved in granite a star chart depicting the Atlanta night sky on December 10, 1948 — the date of the signing of the United Nations’ Universal Declaration of Human Rights. It is a date, and a vision for the future that held deep personal meaning for Robert Berks, as it still does today for Tod Berks and Jim Barksdale.

Both of them are hopeful that it will inspire generations of Georgia Tech students to contemplate their place in the world and their connections with one another as global citizens. For Barksdale, it has a special resonance for the city of Atlanta — deeply rooted in the modern civil rights movement, birthplace of Martin Luther King Jr., and home to the Jimmy Carter Presidential Library and the Carter Center.

When the monument was dedicated on Tech Green, it marked a watershed moment for the arts, and their convergence with science and human rights, at Georgia Tech. As Madison Cario, director of the Office of the Arts, put it, “The monument will cultivate and inspire the creative and analytical talents of our students, and nurture a campus-wide culture and appreciation for the arts.”

Provost Rafael L. Bras added, “Georgia Tech and Atlanta embody science and civil and human rights like no other institution and city in the world. It is fitting that we will be the home of this unique piece of public art.”

“Georgia Tech and Atlanta embody science and civil and human rights like no other institution and city in the world. It is fitting that we will be the home of this unique piece of public art." - Provost Rafael L. Bras

Tod Berks reads aloud from something her husband wrote years ago on the subject of portraiture: “Through common shared experiences, we reaffirm that mankind can communicate down through the ages. Through art, we can study and learn, without words, the most revelatory facets of the human mind.”

She pauses. “Bob isn’t here to appreciate this or enjoy it. But this is the most wonderful tribute that can be made to him. It is more rewarding than words can say.”

It is fitting that Albert Einstein’s likeness should be memorialized on the campus of the Georgia Institute of Technology, one of our nation’s finest centers of scientific inquiry.

By drawing our attention to the Universal Declaration of Human Rights, Robert Berks’ fine work reflects Einstein’s deep commitment to the cause of social justice. Warning of the consequences of unending warfare and oppression, he elevated human understanding, respect, and peace to paramount objectives.

The Declaration, like Einstein’s great works, represents the pinnacle of human achievement, for it promises to every person equal dignity and rights. Despite its never ending nature, we remain nonetheless in constant pursuit of this goal.  Like the scientist, we know that we can never consider the task complete. It is my hope that this monument will inspire all who visit to study the Universal Declaration of Human Rights and find ever more inventive ways to bring its precepts into reality.

By Paul M. Goldbart, Dean of the College of Sciences

Albert Einstein is present throughout Georgia Tech every day. His ideas and discoveries — his magnificent, startling breakthroughs in humanity’s understanding of the workings of space and time, energy and matter — feature liberally in Georgia Tech’s thinking and conversations about research and education.

They are as relevant today as they ever were, serving as critical underpinnings of much of what we now do or dream of doing within the College of Sciences and beyond, as they do in science and engineering communities across the globe. Throughout great swathes of chemistry, physics, astronomy, and electrical and computer engineering — but also from brain imaging in psychology to the mathematics of curved spaces — Einstein’s vision is invoked daily.

This is most evident at the extremes. As we delve within atoms and even atomic nuclei to understand the inner world and its exotic inhabitants — quarks and gluons, neutrinos and the Higgs particle, and perhaps even superstrings — Einstein’s ideas about quantum theory and mechanics at near-luminal speeds are indispensable.

And as we reach out to stellar, galactic, and even cosmic regimes, the essential tool is his view of gravity as a manifestation of the warping of space and time by massive objects. But his ideas are no less relevant in the more familiar world of atoms and molecules, and how we secure views into the structure of materials via the way they react to light and heat.

And Einstein undergirds vital elements of your daily life, too. He was a principal architect of quantum theory, which governs the business of electron motion in matter and reveals semiconducting materials. Without them, Moore’s “law” would not even have been drafted, the IT revolution would have yet to make a single turn, and your smartphone, iPod, and laptop computer would be inconceivable.

By one estimate, a third of the U.S. Gross Domestic Product hinges in some way on quantum physics. Einstein’s insights into the nature of light led to the conception of the laser and the LED. And without his theory of space, time, and gravity, GPS navigation could guide you to your town but not all the way to your front door.

If Isaac Newton made sense of gravity and motion at familiar speeds, and if James Clerk Maxwell led us out of darkness with his picture of light as an electromagnetic phenomenon, then it was Albert Einstein — by reconciling Newton and Maxwell — who paved the way to our modern world.

As scientists and mathematicians who cherish the innovations that our fields continue to ignite for society, my colleagues and I are elated that Georgia Tech has chosen to celebrate science with Einstein, and we are grateful beyond measure to all who have brought this about.

As his biographer Abraham Pais wrote: “Fearless of time . . . and death,” Einstein had “the genius to so often ask the right” questions and “no choice but to accept the answer.”

I can think of no greater inspiration for the Georgia Tech community.