Like many of Georgia Tech’s facilities, the Andrew Carnegie building has a storied history, beginning as the original campus library.

Steel magnate Andrew Carnegie donated $20,000 to Georgia Tech for the construction of the library. He gave the money with the stipulation that the Board of Trustees would allocate $2,000 annually to the library’s operating budget.

The Carnegie Library’s groundbreaking was in November of 1906, and it opened in 1907 with a donation of 700 books from Columbia University. The building remained a library until 1953, when the Price Gilbert Library opened.

The renovation began as a plan to repair some squeaky floors and refresh the carpet and paint. After further discussion and examination of the overall condition of the building, the plan expanded to include replacing windows and doors, making the restrooms ADA compliant, remodeling the offices, and installing an elevator — a first for the two-story building.

“We also opened up the front entry stair,” said Liz Punch, manager of Construction Administration in Facilities Design and Construction, who managed the renovation. The door to the stairwell to the lower level was removed, making the entry more inviting.

The building had to be vacated while the work was done, beginning in Spring 2016.

“I like a challenge,” said Punch, who had a short timeline to complete the renovation. “We did the construction in four and a half months — from the time they moved out until when they moved back in.”

Schneider Wright, Inc. was the architecture firm for the project, with Tech graduate Eric Clementi as lead architect.

The Georgia Trust for Historic Preservation presented the 2017 Preservation Award for Excellence in Rehabilitation to Georgia Tech for the Carnegie Building. 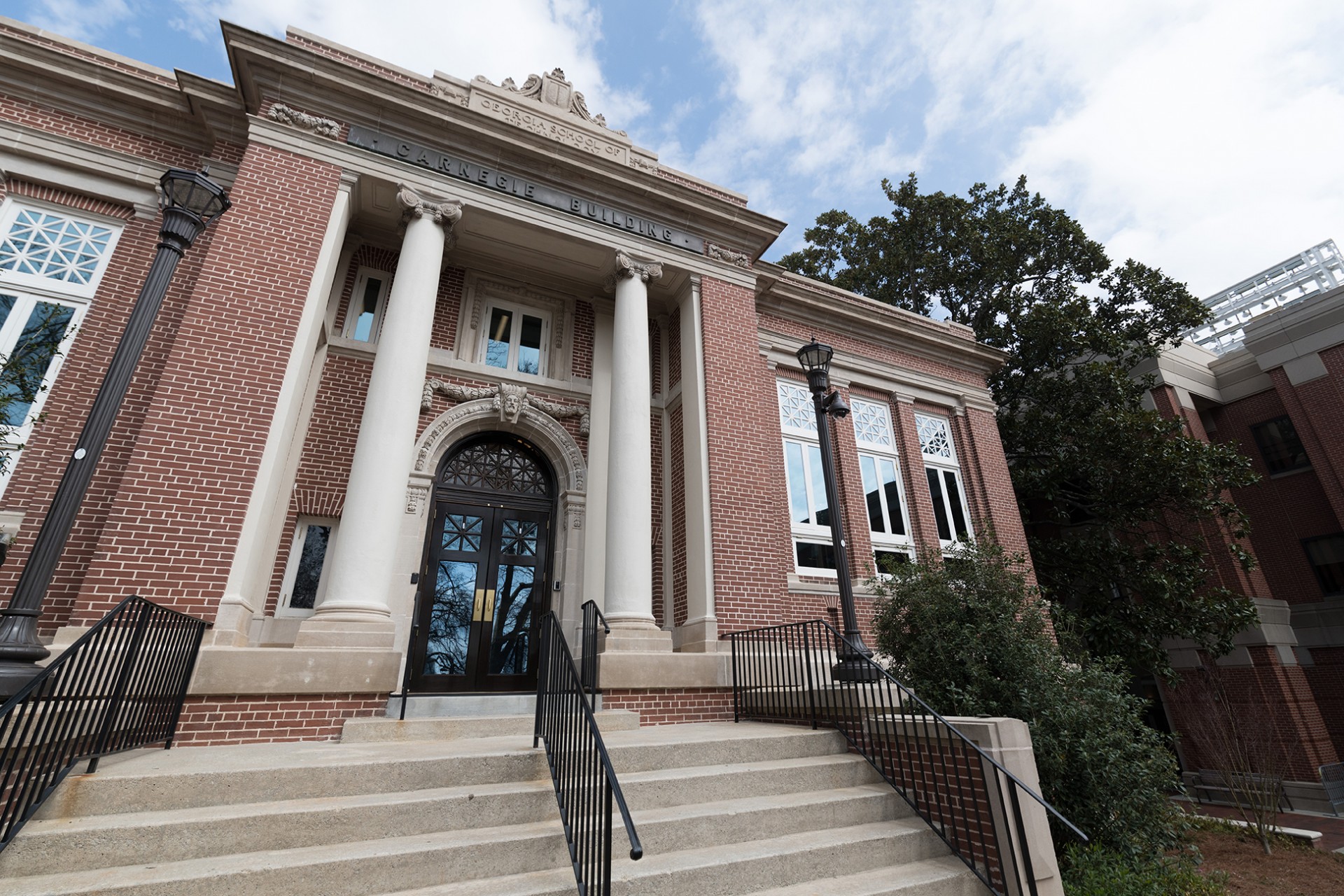 The Carnegie Building originally was the Carnegie Library. The building now houses offices for President G.P. “Bud” Peterson and the executive leadership team. 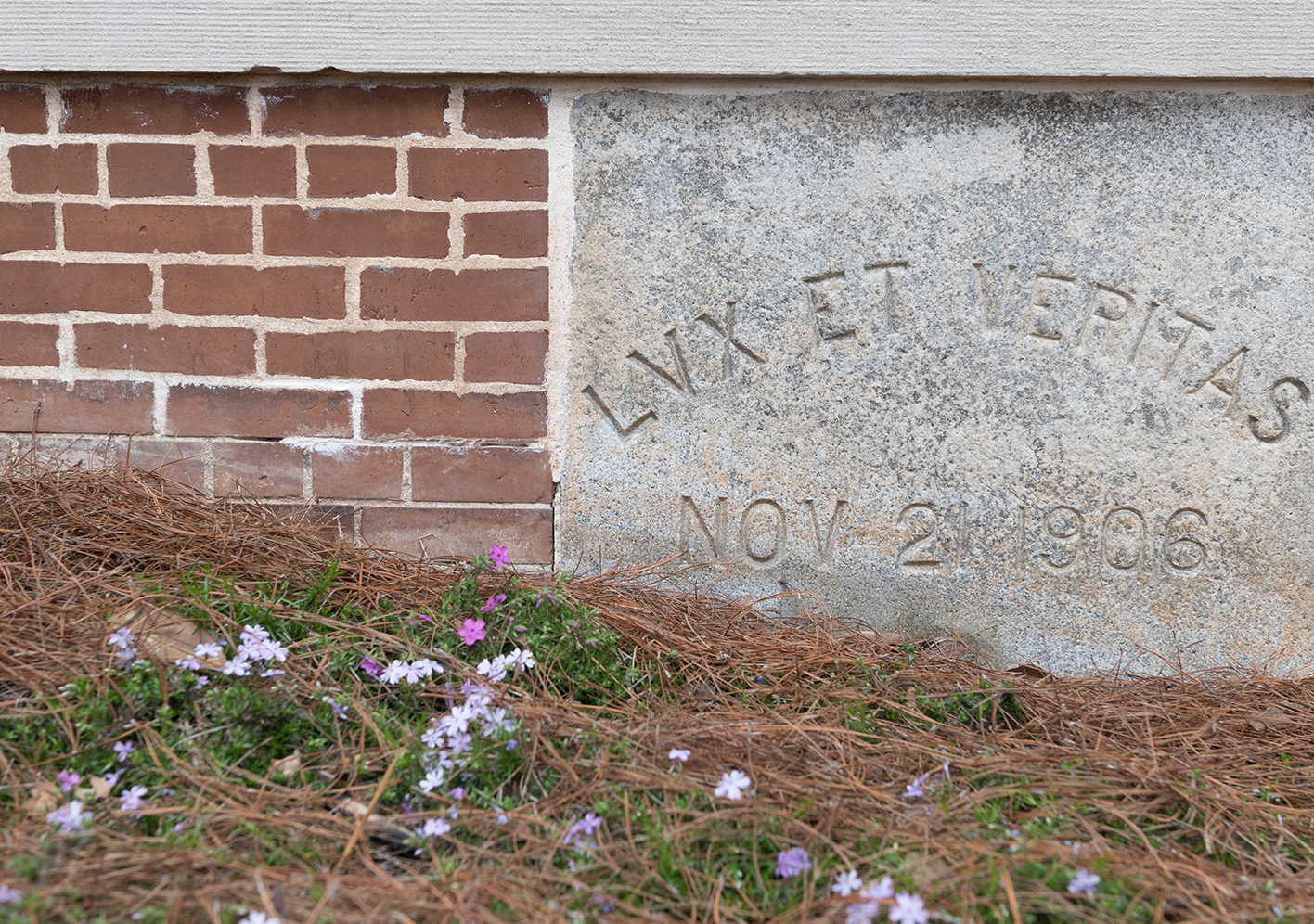 The cornerstone of the building is engraved with Lux et Veritas, meaning light and truth. 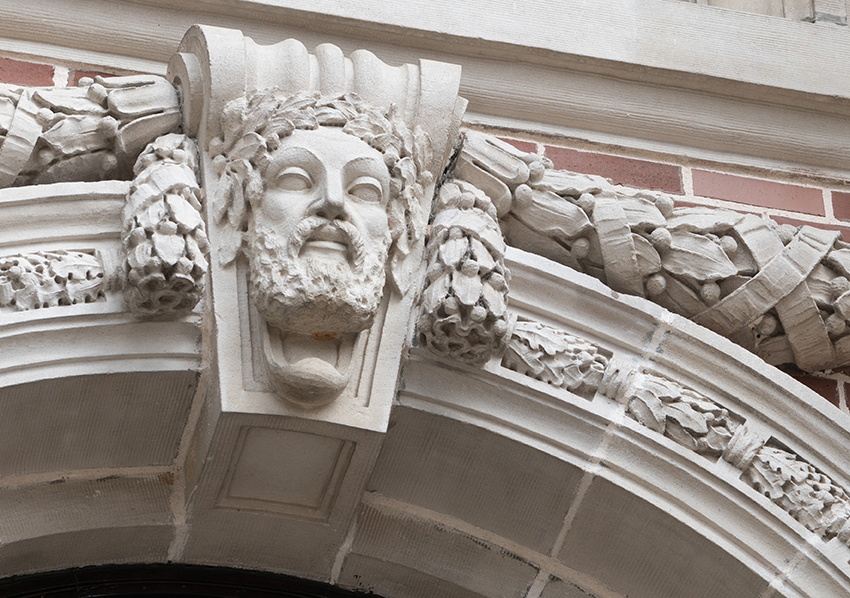 The face above the door, allegedly modeled after Andrew Carnegie’s likeness, greets visitors to the Carnegie Building. 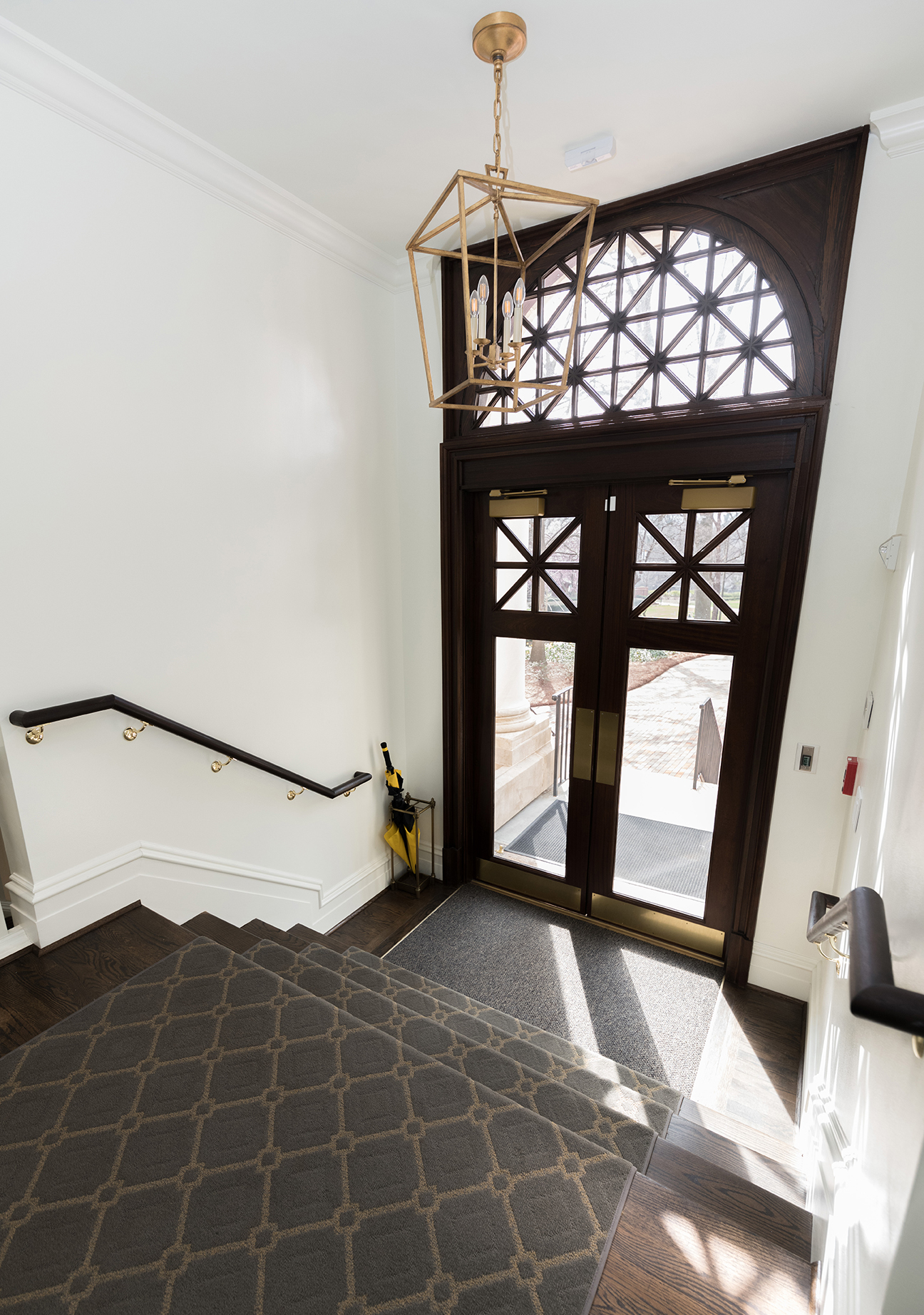 The original transom window over the front door was restored. 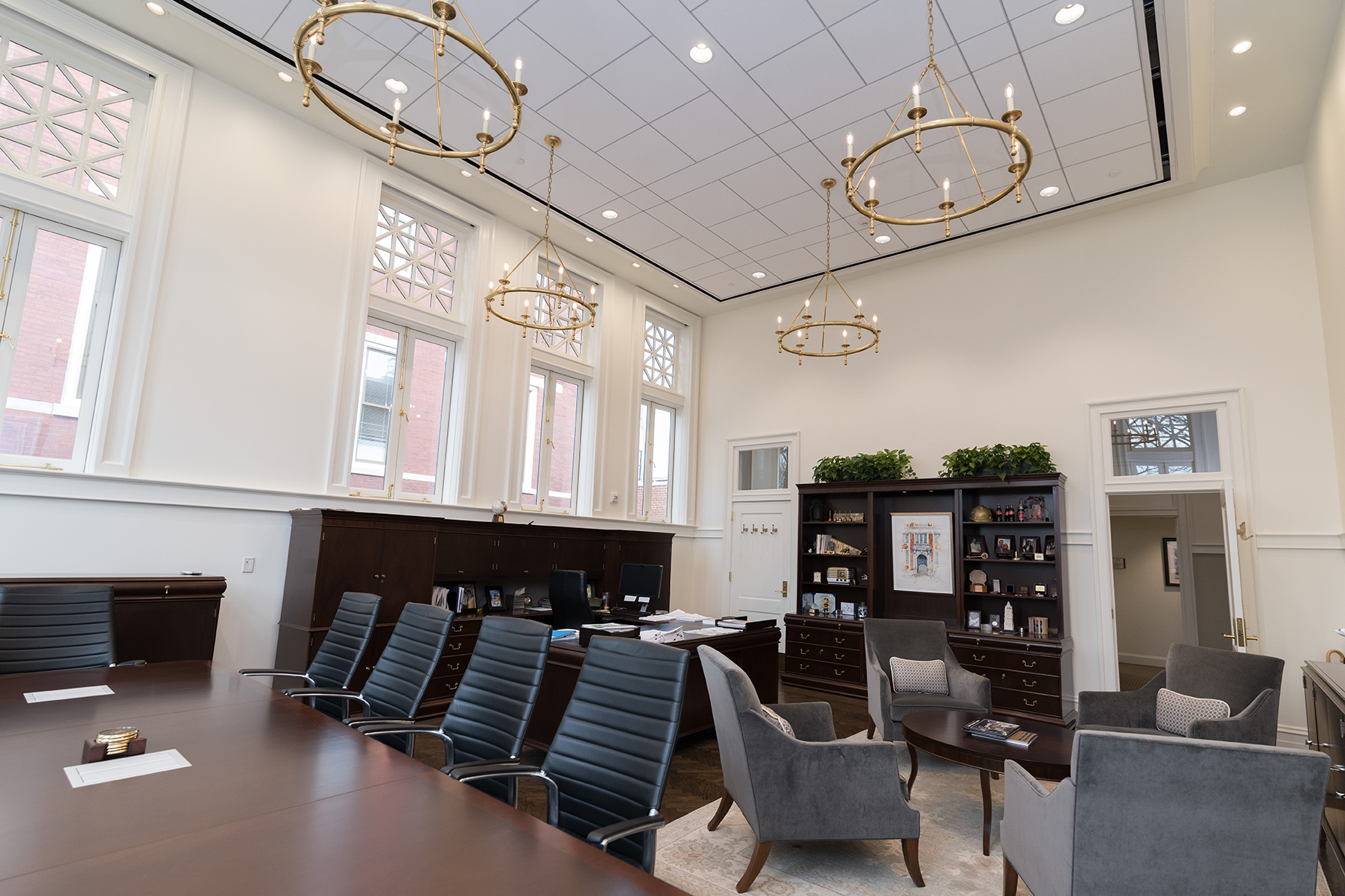 In President G.P. “Bud” Peterson’s office, the windows facing Tech Tower used to be covered with sheetrock. Now, the windows are uncovered. 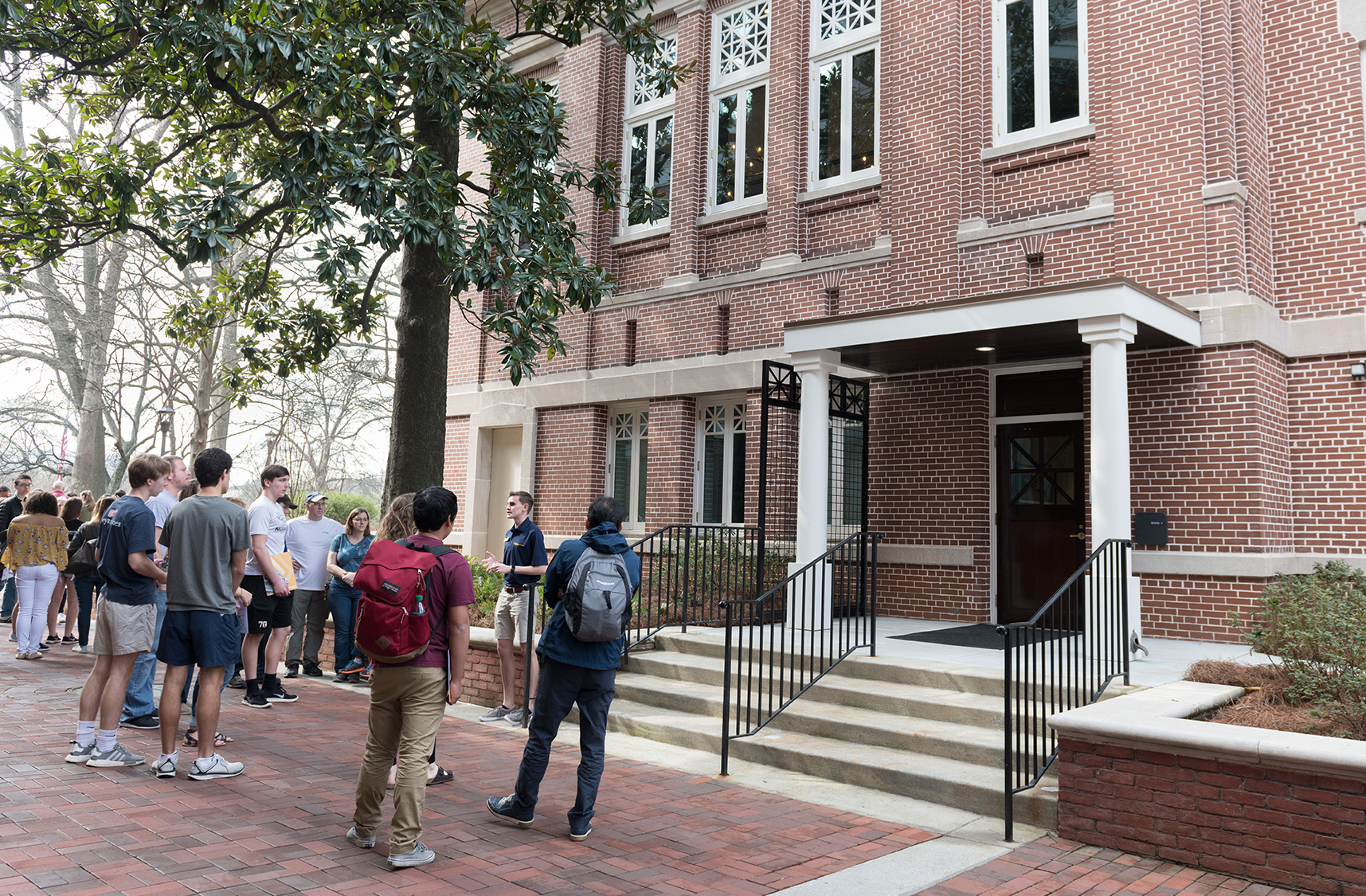 Campus tours often begin outside the Carnegie Building’s ADA entrance, which faces the Bill Moore Student Success Center. A wheelchair ramp is to the right of the door. 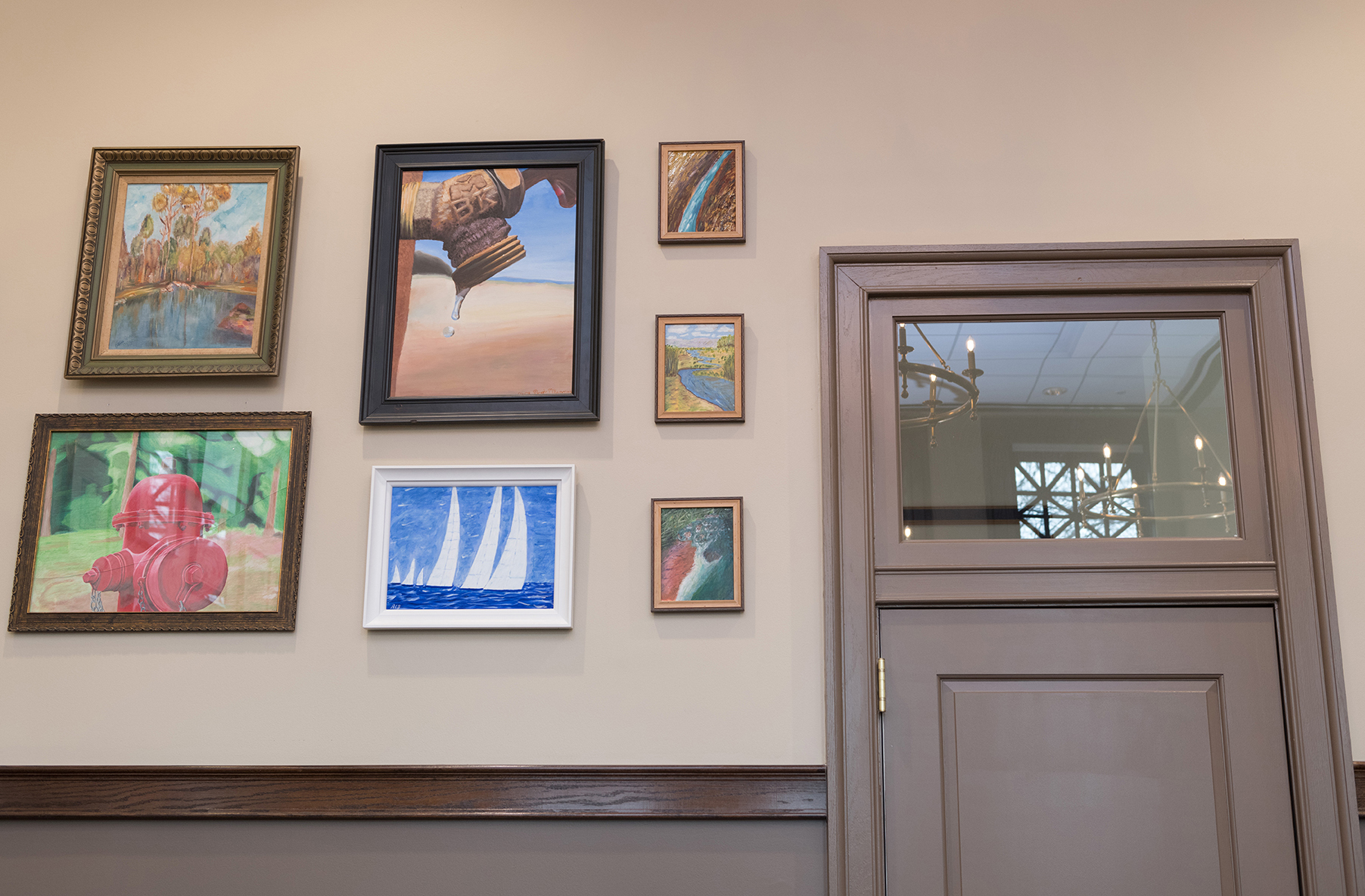 The art displayed in the provost’s office is a mixture of pieces created by Provost Bras, by his mother, and by students who created works for the Clough Art Crawl. 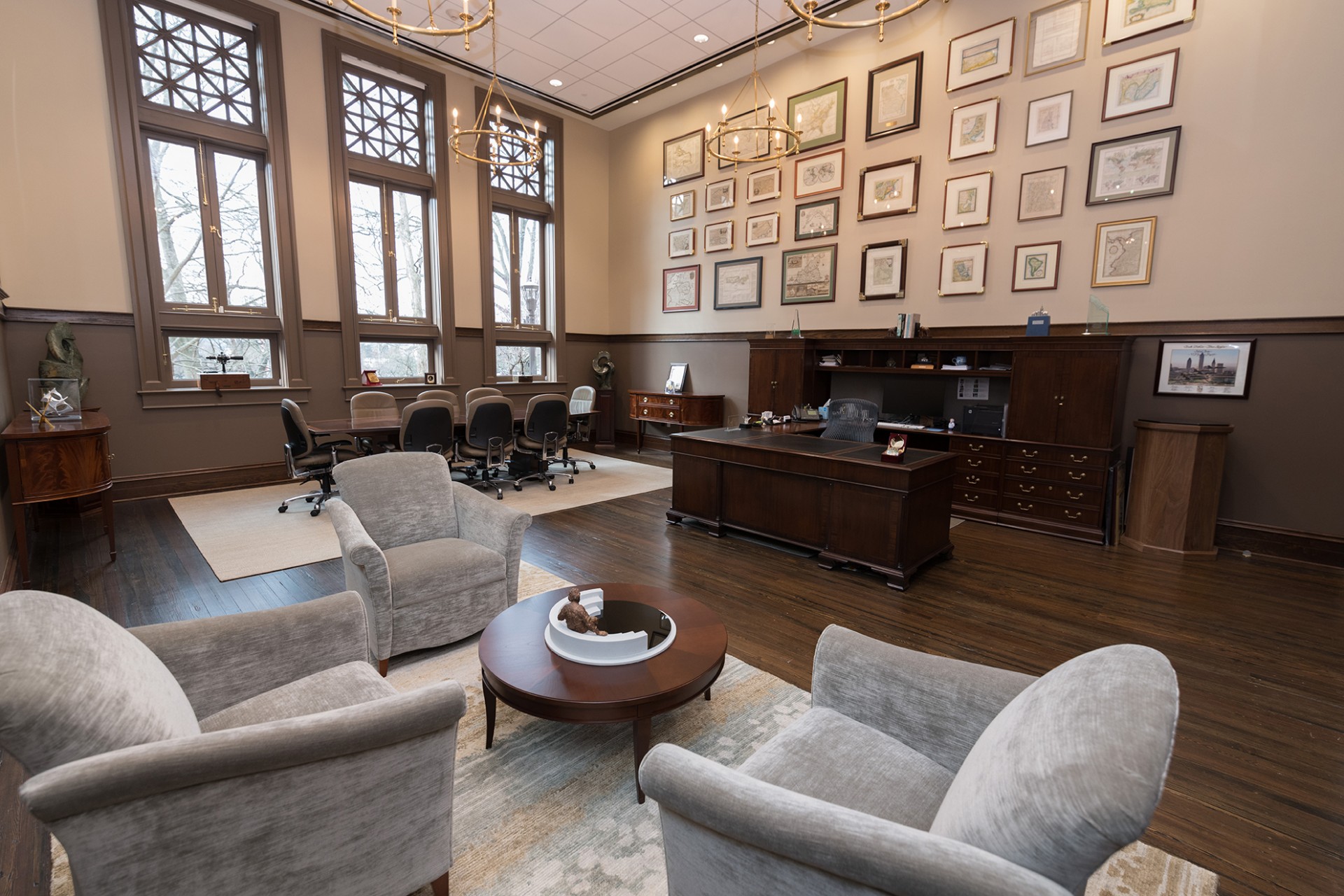 A longtime collector of maps, Provost Rafael L. Bras displays a variety of maps above his desk. The provost’s seating area has a model of Tech’s Einstein statue on the coffee table.

All photos by Allison Carter

An analysis determined that the interior walls, like the lobby shown here, were primarily painted white when the building was constructed.

The original hardwood floor was uncovered in the provost's office.

The front entry stair was stripped and repainted, and the stairwell door was removed to create a more open area.

The president's office has a conference table and a seating area.

An elevator was installed, and the restrooms were made ADA compliant.