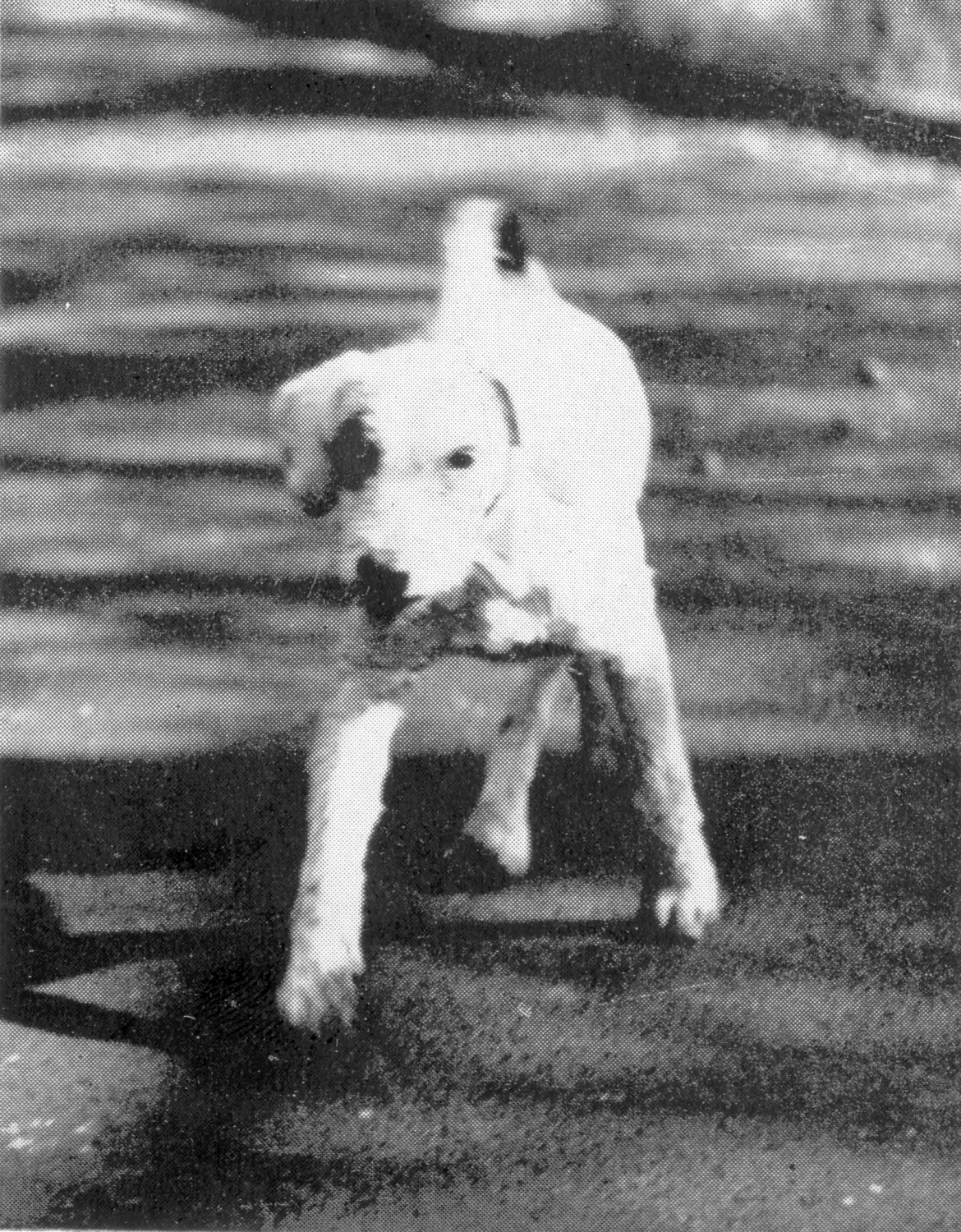 In March of 1945, an 8-month old white terrier was thrown out of a car window near The Varsity. The dog was severely injured in the fall and required surgery. As a result, her head was permanently positioned at an angle from her tail, giving her an awkward gait. When Tech students saw her, they fell in love and gave her an appropriate name: Sideways.

Sideways attended classes on a daily basis, ate table scraps at Brittain Dining Hall, and is said to have slept in a different dorm room every night. She died in 1947 and is buried on the northwest side of Tech Tower. To this day, Yellow Jackets often leave a penny on her headstone, hoping for a little luck on exams and the new school year.

There aren’t official or unofficial dog mascots at Tech these days, although it’s not uncommon to see a four-legged friend on campus every now and then. Some are even working alongside researchers in labs to help create new technology that will assist people with disabilities or build future robots.

Melody Jackson earned her Ph.D. in Computer Science from Georgia Tech in 1998 and has trained assistance dogs for nearly 20 years. Now she’s putting her two passions, computers and dogs, together. Jackson’s research team, which includes Professor Thad Starner and Research Scientist Clint Zeagler, has created high-tech vests for canines for a project called FIDO (Facilitating Interactions for Dogs with Occupations). The vests are equipped with sensors on each side. Some are triggered by a dog’s bite; others by a nudge of the nose. Once activated, the sensors can send either audible cues or text notifications to a smartphone.

“Currently, dogs can only communicate with people by barking or through body language. Sometimes that isn’t good enough,” said Jackson, an associate professor in the School of Interactive Computing. “The sensors can give them a ‘voice’ they’ve never had.”

For instance, Jackson is working on search-and-rescue demonstrations in her lab in Technology Square. In the real world, dogs looking for a missing person can search alone, sniffing for a scent. Once they find someone, they must leave the person, return to their handler, then lead the search party back to the person. The process could be easier and faster with FIDO technology.

“When a dog finds a missing person, she could activate the sensor that sends a text message to the handler’s phone and triggers a GPS map,” Jackson explains. “The dog could either stay with the person or continue searching for others.”

Jackson also says bomb-sniffing dogs could use multi-sensor vests to indicate which chemicals are present when bombs are found. Assistance dogs with hearing-impaired owners could communicate if a doorbell is ringing or a fire alarm has been triggered. A dog can hear both, but the necessary actions for each sound are very different.

Across campus outside the Love Manufacturing Building, Assistant Professor David Hu and student Andrew Dickerson took a closer look at something all too familiar for every pup owner: the wet-dog shake. Armed with a hose and a high-speed camera, the duo learned that dogs shake themselves 70 percent dry in just a few seconds thanks to their loose skin. Large dogs, such as labs, twist about four times a second. Chihuahuas move their bodies back and forth seven times per second. The findings are part of a study that looked at five dog breeds and 16 animals.

Why does it matter?

“We hope our findings can improve technology, especially in machines that rely on self-cleaning or self-drying,” said Dickerson, a mechanical engineering student who led the study.

For example, the next time a rover lands on Mars, the robot could shake the dust from its solar panels. Current digital cameras rely on internal shakers to remove dust from sensors.

The researchers say animals have evolved and perfected the shake over millions of years. Wet fur is a poor insulator, so drying quickly is essential to avoid hypothermia. Click here to see different animals shake themselves dry.

So whether crooked, vested, wet, or dry, one thing is for certain: a Dawg may not be welcome at Georgia Tech, but a dog always is. 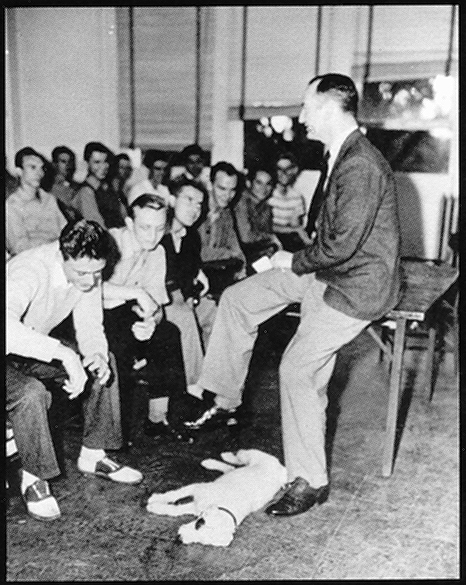 Enjoying a milkshake at the College Inn in 1946. (Photo: AJC) 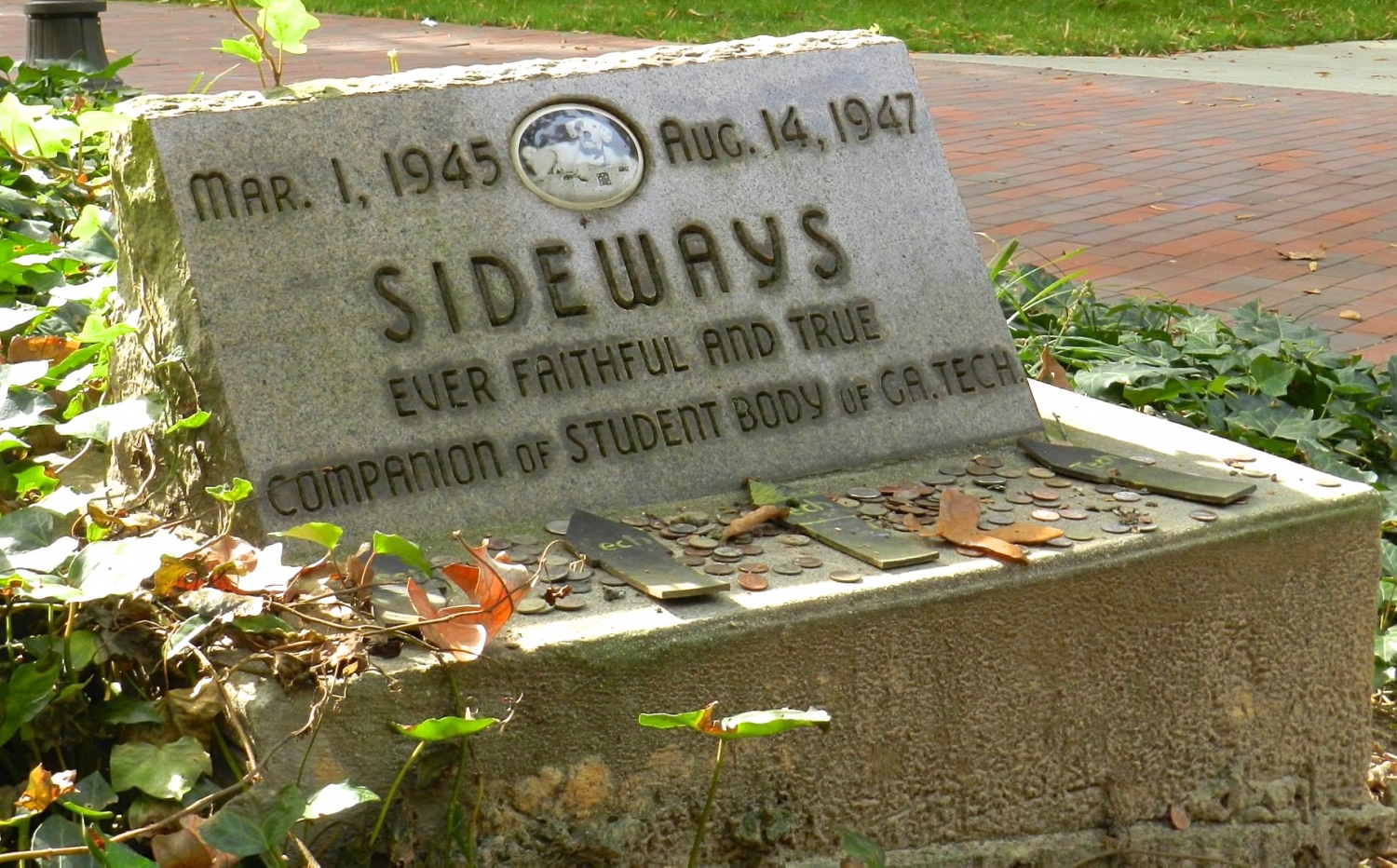 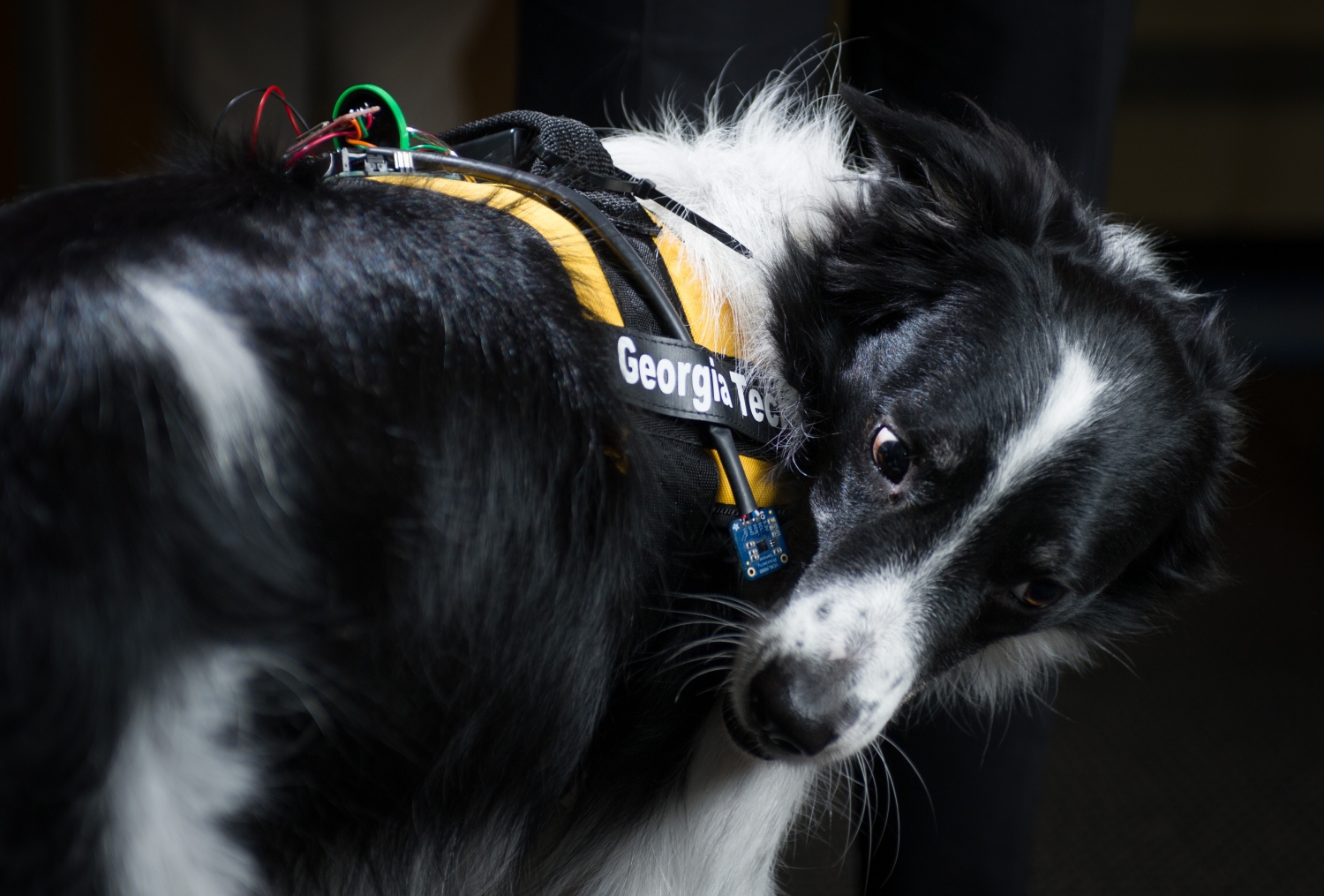 By moving his nose in front of a proximity sensor, Sky is able to "talk" to its owner. (Photo: Rob Felt)