Like many students, Andrew Kell enrolled in Georgia Tech right after high school. But, he blew it. He dropped out after two years because of poor grades, fueled by substance abuse, depression, and apathy. After a five-year hiatus, including time in a rehabilitation program, he went through the process of readmission and academic renewal to come back to Tech at age 24. Now, he is graduating with a bachelor’s degree and a 4.0 grade point average in chemical and biomolecular engineering.

“When I interviewed with the advisor, Ami Ivanecky, to come back to Tech, my first question was ‘Do I have any chance at graduating before I turn 30?’ She looked at my relatively bare transcript and said ‘Yes. You’ll probably get out before you turn 30.’”

“I just made my goal!” he said jokingly.

After Christmas, Kell will move to Baton Rouge, Louisiana for a process engineering role with ExxonMobil. He previously worked for ExxonMobil as a process engineer for three semesters in Tech’s Co-op Program, doing short term optimization, process tracking, and providing base level support for the operators who run the plant.

“I always thought that if I earned the grades I wanted I might go to graduate school or medical school, but I certainly had no plans to work for an oil company,” Kell said. “Honestly, I've always struggled with knowing what I liked or what I wanted to do.”

When he was trying to decide what path to take after graduation, Kell received advice from faculty mentor Hang Lu, professor in the School of Chemical and Biomolecular Engineering.

“She said, ‘Andrew, you don’t know enough yet to say what you do or don't like. So, don’t dismiss something based on what you don’t know. Look for the intersection of what you like, what you're good at, and what someone will pay you to do.’”

Kell heeded her advice, and he kept an open mind regarding a career with Exxon.

“I found that I enjoyed the challenge and I was good at it,” he said.

Kell talks about how he overcame self-doubt to get to where he is today.

Kell graduated from Dunwoody High School in 2007. But, from kindergarten through the first half of his senior year in high school he had attended Woodward Academy in College Park, Georgia. Right before Thanksgiving of his senior year, he was caught with alcohol in his car. To avoid the embarrassment of being expelled from Woodward, he withdrew and enrolled at Dunwoody High.

“I had good grades and high test scores, and I think that helped me get into Georgia Tech,” Kell said.

However, he was rejected by Brown University and U.C. Santa Barbara — two legacy schools where he thought he would have been accepted — because of his trouble in high school.

“So, I came to Georgia Tech very disgruntled,” he said. “This was not where I wanted to go. I was trying to get away from my family, get away from Atlanta, and go somewhere different. And, I still just ended up here.”

Kell admits he was not a very attentive student. He spent a lot of time just having fun being on his own.

“I went from being an excellent student to not caring at all,” he said. “The academic pitfall for me, and for some others who struggle during their first years of college, is that high school wasn’t hard enough. It wasn’t for me. I never really had to learn how to study or work hard in high school. I could wait until the last minute, do what I needed, and scrape by with a low-A or high-B. That approach didn’t work at Tech.”

Kell said he also didn't go to class regularly, do his homework, or apply himself in a meaningful way.

“At test time, you can’t teach yourself a month’s worth of college material overnight,” he said. “My first semester, I had a breakdown and couldn’t write a paper. The professor gave me an extension, and I still never wrote it, so I failed that class. In the rest of my classes, I made B's and C's, and it just continuously got worse.”

Kell took the same computer science course three times, planning on using Freshman Forgiveness to keep the failing grades from being included in his GPA. He got a D the first two times and an F on the third try.

“That was when I was having the most problems with depression and substance abuse. I just didn’t care about school. I no longer believed in myself, and I was ready to leave,” he said.

“I wasn’t going out of my way to get integrated into Georgia Tech. I did less and less in my classes, and I felt more and more isolated. I didn’t go to the Counseling Center. I didn’t ask for help. In my final semester, I woke up, decided not to go to any of my finals, took some pills, and went back to sleep.”

After that semester, it was over. Kell hadn’t talked to his parents about his problems, but they knew. They refused to pay for college if he wasn’t going to apply himself. So, he moved back home.

“I think I felt relieved. I thought I didn’t belong here, so why even try? The truth is I wasn’t trying at all,” he said. “It’s so much easier to blame that high school or other people for your problems instead of taking a hard look at yourself and realizing that most of the problems are of your own making.”

A couple of months after going back home Kell was arrested for marijuana possession. The court sentenced him to probation. His parents knew he needed professional help. They asked him to ride to Home Depot with them, but it was a ruse to get him in the car; they took him to rehab.

“At that point I was pretty beaten down. I went to treatment, and eventually it clicked with me,” he said. “I was on probation until 2016, so I had to go multiple years without messing up.”

During that time he worked at various restaurants and eventually at his brother’s company that made custom interiors for cars.

“I was able to start putting my life back together,” he said. “I started thinking that maybe I should go back to school because I saw the options that were available without a degree, and I didn’t like them.”

Kell considered going to Kennesaw State University. So, he spoke with an admissions counselor there who told him about academic renewal options and suggested that he try getting back into Tech. He reached out to Tech and started the admission process.

Making the Most of His Second Chance

Kell was re-admitted to Tech with help from Ami Ivanecky, academic advising manager for the School of Chemical and Biomolecular Engineering. He committed to study chemical engineering for at least the first three semesters, to see if he liked it. 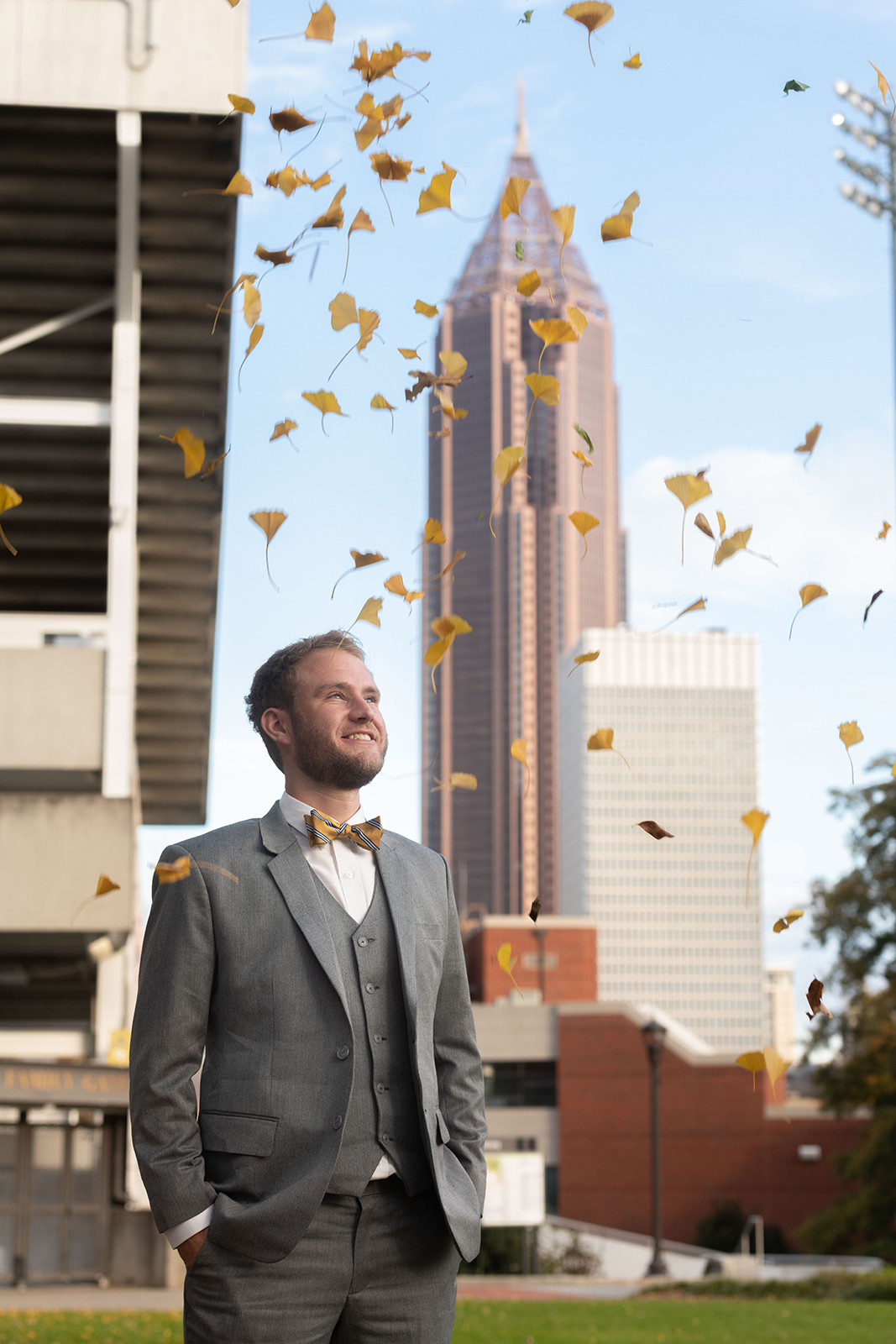 “To my immense surprise, I found that I was good at school and I liked learning again,” he said. “Being a little older helped, too,” he added with a laugh.

This time he set a goal to not only graduate, but to do so with a 4.0 GPA. He kept his goal to himself, and steadily chipped away at it each semester.

“Graduating with 4.0 GPA would be the ultimate proof that I actually belonged here,” he said. “I've now realized that if you get accepted to Tech, you belong here and you have the capacity to be successful here.”

Things were different for Kell the second time around, primarily because he was in a good mental state.

“I had emotional well-being and stability. I wasn’t depressed. And, I knew what I needed and didn’t need,” Kell said. “So, that drove me to prioritize what was important.”

Kell’s priorities were: to succeed academically; to get involved on campus so he would feel connected to other students; and, to give back to others who are struggling either academically or with substance abuse.

He became a student ambassador for the School of Chemical Engineering, where he helped with FASET events and gave tours to prospective students and their parents. As part of Omega Chi Epsilon, the National Honor Society for Chemical Engineering, he tutored students in the introductory ChBE course. He was also a near peer mentor, coaching first-year students through their problems. In his third year, he joined the Undergraduate Judicial Cabinet in the Student Government Association, where he looked for ways to help students who found themselves in trouble.

He used his personal experience to share his perspective with students that it’s alright to fail and it's alright to make mistakes. He continues to share his story in case it might help someone who is going through a similar experience.

“If you were admitted here, you belong here,
and you have the capacity to be successful here.”

“When you’re struggling, it’s so easy to look at those who are succeeding and not see yourself there,” he said. “When I was at my lowest and doing my worst in school, it was unimaginable to me that I could pass a class, let alone get an A. It was unimaginable that I could string together enough successful semesters to graduate. I couldn’t imagine getting an internship or a co-op. I certainly couldn’t imagine a research lab letting me work with them. Everything just seemed so far out of reach. Now I see that all those times where I was struggling were some of the most enriching and rewarding of my life because they made me who I am — a much better and stronger person than before.”

Kell’s diploma is within reach now. He completed his degree requirements at the end of summer, and he will participate in the 2018 Fall Commencement ceremony.

“I’m not walking for myself. It’s validation for my family, friends, and all of the people who believed in me, especially when I didn't believe in myself,” he said.