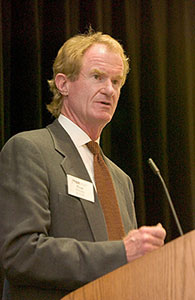 Making a meaningful difference in students’ lives is a long-term priority for E. Roe Stamps IV and his wife, Penny.

The program seeks to recruit the most promising scholars from across the nation, with the ultimate goal of graduating stellar, well-rounded individuals who will serve as leaders in a technologically driven world.

December 2014 graduate Veronica Foreman, an aerospace engineering major, is a prime example of the high quality and innovative spirit that Penny and Roe Stamps are seeking to cultivate in Tech’s finest students.

Earlier this year, Foreman received the College of Engineering’s Outstanding Aerospace Undergraduate Researcher award, which recognizes her contributions to a timely research project, “Software in Military Aviation and Drone Mishaps: Analysis and Recommendations for the Investigation Process.” The research is currently under review for journal publication and was published in shortened form at the 2014 Reliability and Maintainability Symposium.

Foreman began delving into the connection between software performance and military aircraft accidents last year, during a summer research job with Georgia Tech’s Space Systems Design Laboratory (SSDL). Although she had previous research experience, Foreman quickly discovered that her new research mentor, Professor Joseph Saleh, would expect much more from her. “More than anything else, he taught me that even when you are not making visible progress in your research, you are making progress if you keep asking the right questions. I remember that whenever I hit a wall.”

Her work with SSDL taught her valuable lessons that Foreman was able to take along on a research expedition to Antarctica — funded through the Stamps Program — where she studied penguin hydrodynamics. “Every research experience I have helps me see where I might fit into the field of aerospace engineering. This semester, I’m working with Professor David Spencer on a cube-satellite mission concept study for NASA’s Jet Propulsion Laboratory.” She says each experience makes her even more eager to keep learning and giving back.

This is precisely the perspective that made Foreman stand out from other candidates for the Undergraduate Researcher Award. It is also a mindset that she hopes will help her achieve a lifelong dream.

“I very much want to be an astronaut when I grow up, and I’ve been working hard to align my studies to make that happen,” she said. “I want to pursue a Ph.D. – looking at the reliability of UAVs [unmanned aerial vehicles], and I think this research will help me get closer to that goal.”