Much of what is familiar about the Georgia Tech campus was brand new in 1996. Here are a few things that came as preparations for the Atlanta Games: 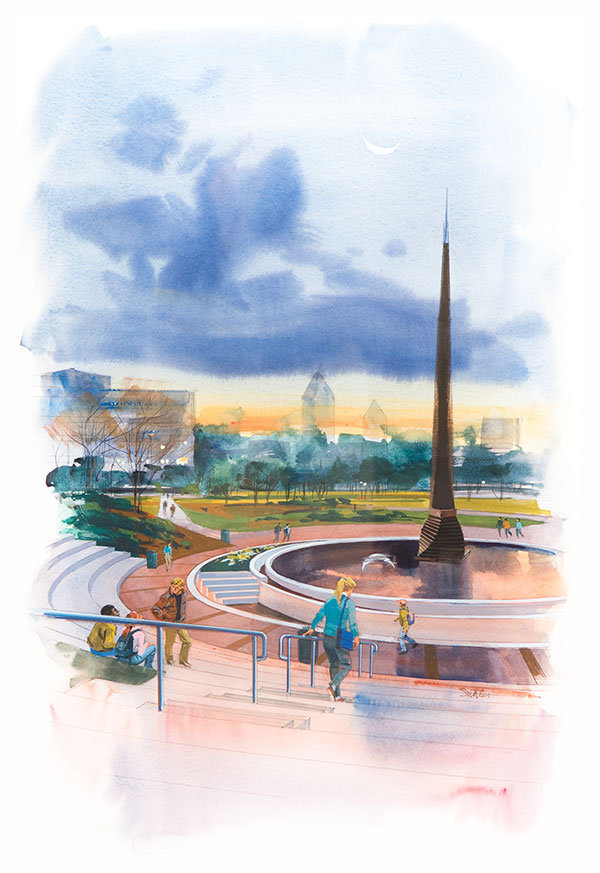 The gathering spot next to Georgia Tech’s Student Center, which includes an 80-foot stainless steel obelisk rising from a fountain surrounded by a 300-seat amphitheater, was built for the Olympics.

The sculpture, which is capped with a stylized tribute to the Tech Tower, was donated by alumnus Richard Kessler, IE 1968, MS IE 1970, with the classes of 1943 and 1953 providing funding to build the plaza. The Kessler Campanile served as the backdrop for the TODAY show’s broadcasts during the Games.

Before the 1996 Olympics, Georgia Tech introduced a new logo. It was created following a nearly two-year study of how the Institute was viewed by various audiences and what symbols conveyed its tradition and mission.

The logo incorporated the then-new Kessler Campanile and was accompanied by the new wordmark that incorporated both names: Georgia Tech and the Georgia Institute of Technology. This logo is still in use today. 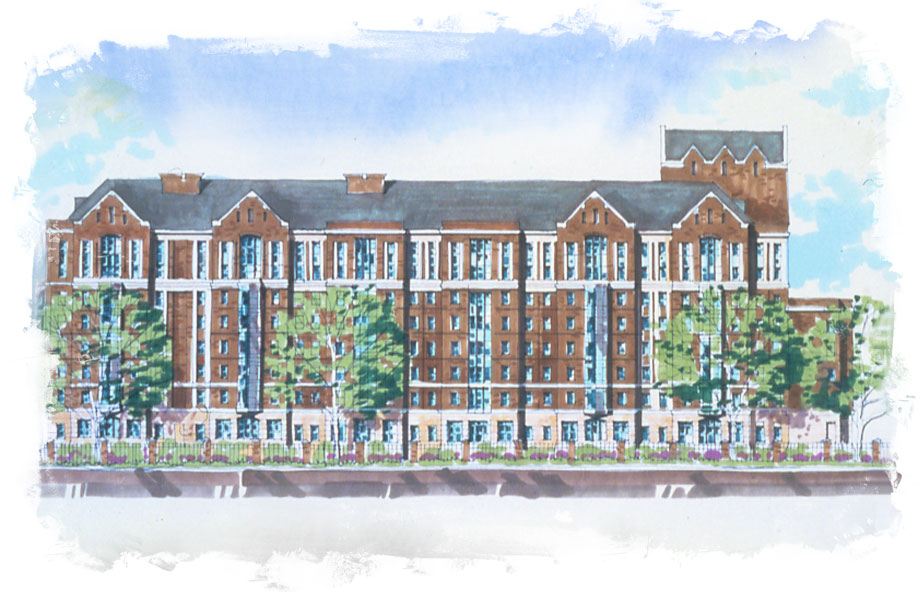 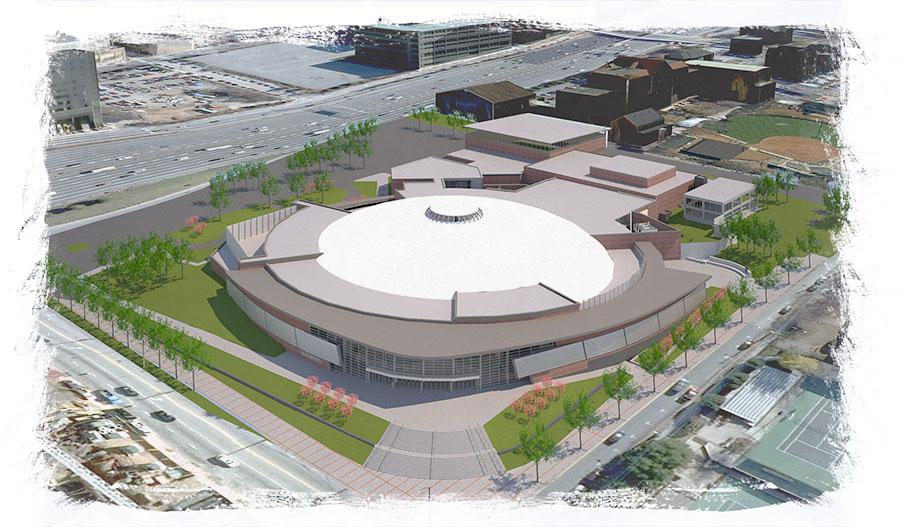 The coliseum, now named McCamish Pavilion, underwent a $12 million renovation to add better seating, air conditioning, and executive suites for the 1996 Games. The coliseum was the venue for Olympic boxing and Paralympic volleyball.

In 2011, the coliseum was renovated again, opening the following year as McCamish Pavilion. It was renamed in recognition of a $15 million gift from the family of Hank McCamish, a Tech alumnus and longtime insurance executive. The facility now has a seating capacity of 8,600, an additional upper-level balcony, club seating, an expanded concourse and plaza area, a two-story glass front entry, an LED center scoreboard, and enhanced digital signage. 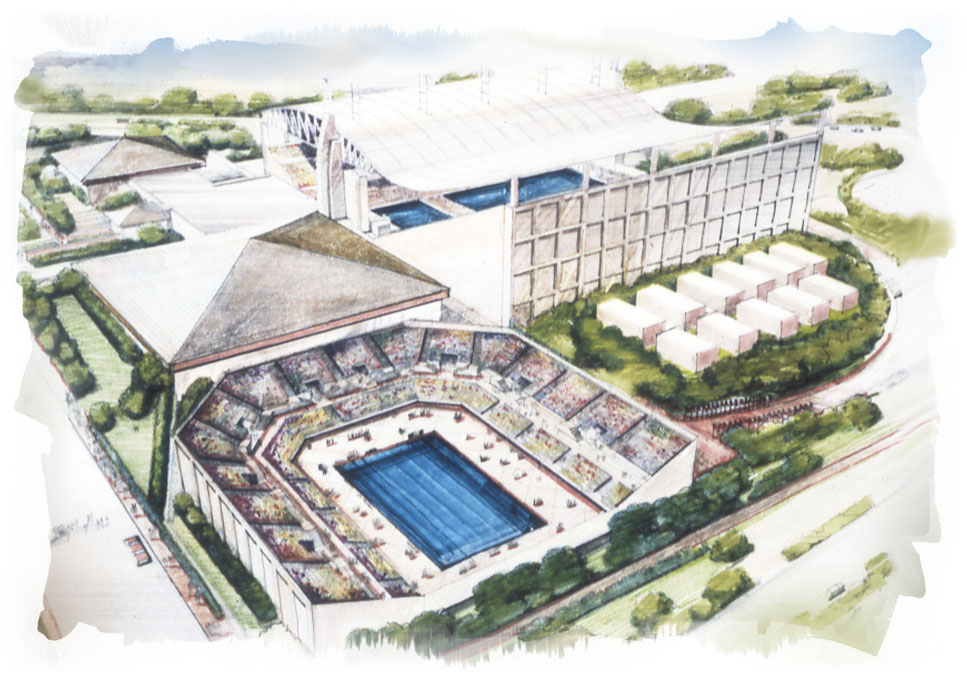 The Aquatic Center was the venue for swimming, diving, synchronized swimming, and water polo. Since the Olympics, the Aquatic Center has undergone a major renovation. Georgia Tech demolished the old Student Athletic Complex building, and added—above the Olympic pool—six basketball courts, three dance studios, an inline hockey rink, and an elevated four-lane running track with an impressive city view. Connected to the front of the Aquatic Center is a 15,000-square-foot fitness center with four racquetball courts, a squash court, a climbing wall, classrooms, and office suites. All of this makes up the Campus Recreation Center, which has the Aquatic Center as its centerpiece.

In 2015, thanks to the generosity of Richard L. Bergmark, IM 1975, the Aquatic Center was named the McAuley Aquatic Center in memory of James Herbert “Herb” McAuley, a 1947 electrical engineering graduate, former swimming champion, and Georgia Tech swim coach.

From July 19 to 23, McAuley Aquatic Center will host USA Diving’s official team send-off prior to the team’s departure for the 2016 Olympic Games in Rio de Janeiro, Brazil. As part of the send-off, Team USA will hold open practices, participate in team-building exercises, and visit Atlanta-area children’s hospitals. Several members of the 1996 U.S. Olympic Diving Team also will participate.

Additionally, the McAuley Aquatic Center will host the training camp for the USA Swimming Olympic Team from July 21 to August 1. One session will be open to the public on July 30, from 11 a.m. to 2 p.m. 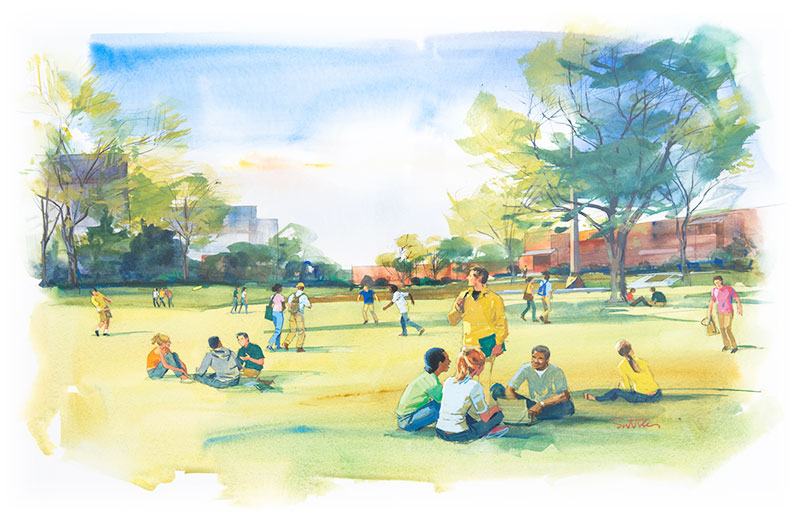 Back to 20th Anniversary of Atlanta Games