Growing up in Nigeria, Oladipupo (Ola) Johnson did a lot of traveling with his family, but never to the U.S. He attended boarding school and learned about Georgia Tech from his roommate’s sister, who convinced him to apply.

He didn’t think he’d get in — but he did, and he arrived in the summer of 2014 for Georgia Tech’s Challenge Program, a summer academic preparation program for incoming underrepresented minority students. 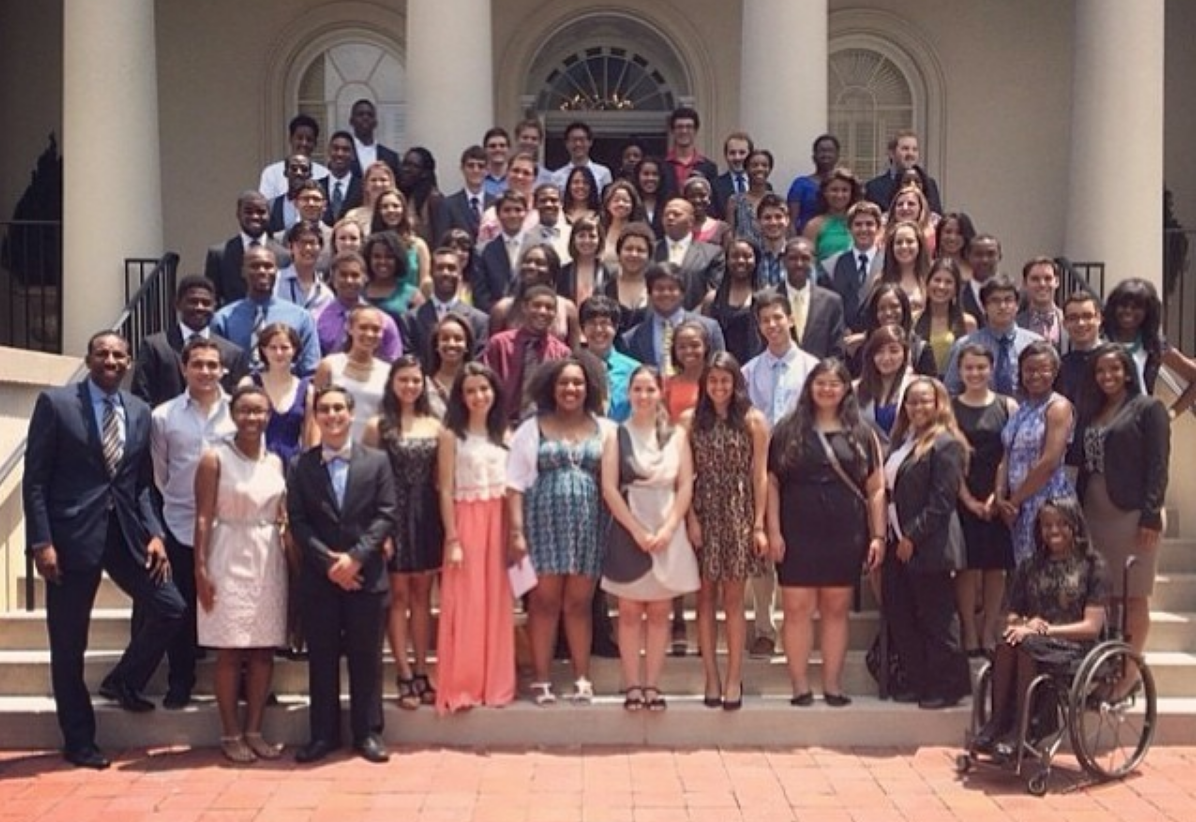 The Summer 2014 Challenge Program cohort outside the Historic Academy of Medicine.

In that same Challenge cohort was Brandon Gipson, a computer science major from Virginia who started programming in seventh grade. Gipson had Georgia Tech on his radar at an early age thanks to a teacher and an older student from his high school who had gone on to attend Tech. Like Johnson, Gipson never set foot on campus before coming to Challenge that summer.

For Gipson, culture shock hit once classes started. During Challenge, Gipson and Johnson had been part of a cohort of 73 students. When the fall semester began, their worlds changed.

“I came from a majority minority high school,” Gipson said. “In some ways, it was exciting to get to meet people from all over the world. But, at times, it was alienating.”

Gipson was feeling what numbers show: Though Georgia Tech awards more engineering degrees to women and underrepresented minorities than any other university in the U.S., black men comprise less than 5 percent of the resident student population.

Both Gipson and Johnson will graduate this week, with degrees in computer science and mechanical engineering, respectively. For both, it was community connections that helped lead them to Tech; the community they found here sustained them and was central to their college experience. 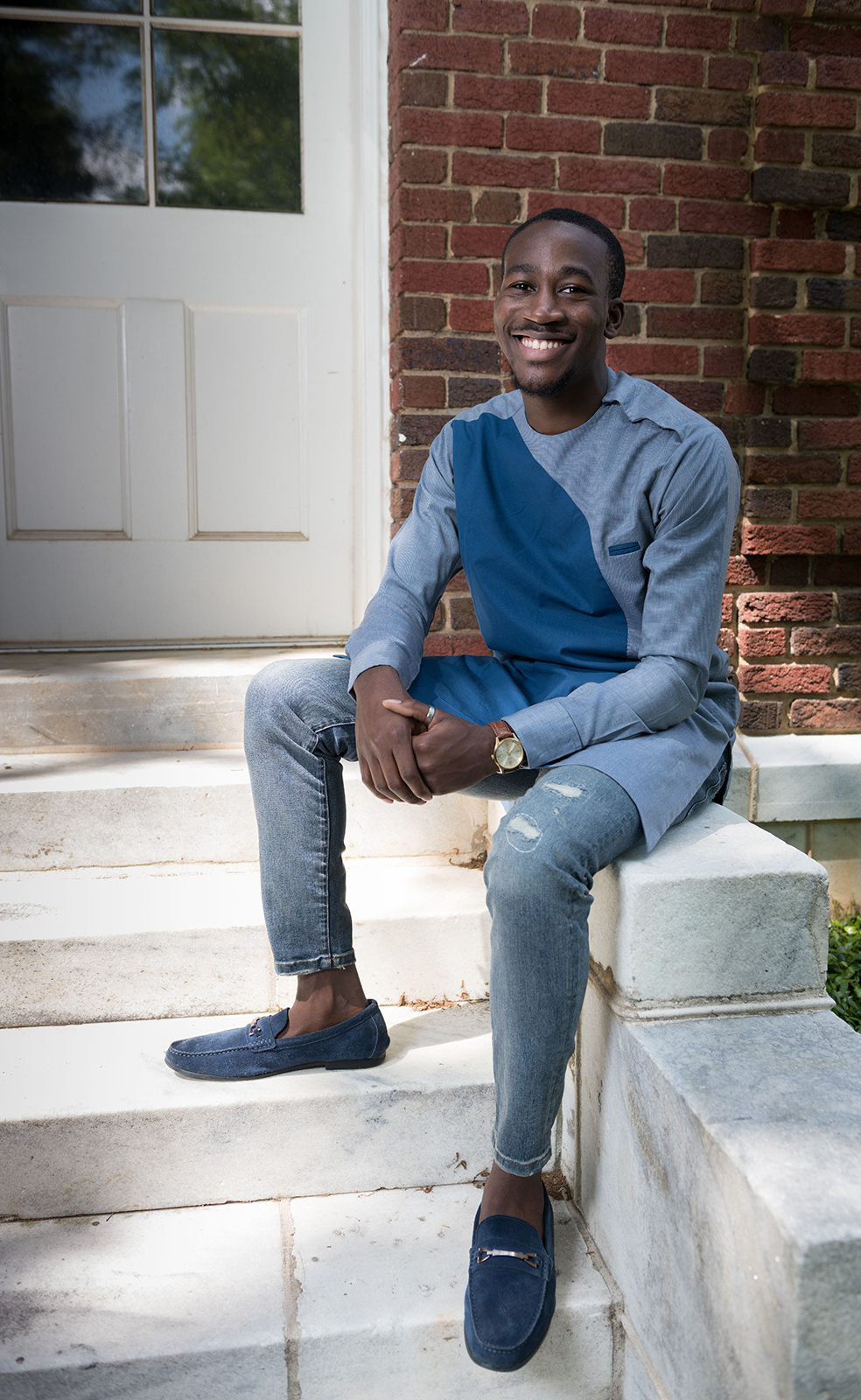 Ola Johnson on the steps of the Chapin Building, home of OMED Educational Services, in Harrison Square. Photo by Allison Carter

In his four years here, Johnson has been an active student leader with OMED and beyond. He’s been involved with Alpha Kappa Psi business fraternity, the National Society of Black Engineers, and the African Student Association, to name a few. He studied abroad at Georgia Tech-Lorraine in Metz, France, and built vehicles with GT Motorsports. He even emceed a campus-wide event celebrating African culture — Taste of Africa — on the stage of the Ferst Center for the Arts before an audience of nearly 800.

He loved Challenge so much that he returned twice, as a tutor in summer 2015 and as a counselor in 2016, which he counts among his most rewarding experiences.

“Getting to come back and reflect on how far I’d come since I was in Challenge was really amazing,” he said. “And keeping up with the students who arrived that summer has been great. We help each other with classes, help each other find jobs.”

Gipson agrees — Challenge was pivotal, and being around so many smart students was energizing.

“No matter where you end up on campus, your OMED peers never leave,” Gipson said. As part of the video game development club, Gipson has been a project leader and taught software to others. During his involvement, the number of project leaders increased from one to four African-Americans.

“It’s important to have more minorities in game development,” he said. “A lot of minorities play video games, and I want us to have a positive perception in media.”

After graduation, Gipson will move back to Virginia to work for the Department of Defense (DoD). It’s the continuation of a long-held military interest as the son of a marine, attendee of the U.S. Naval Academy’s Summer Seminar, and recipient of naval scholarships. He was the recipient of a Science, Mathematics, and Research for Transformation (SMART) Scholarship for Service, which provides support for students pursuing education in STEM fields and aims to increase interest in working for the DoD. 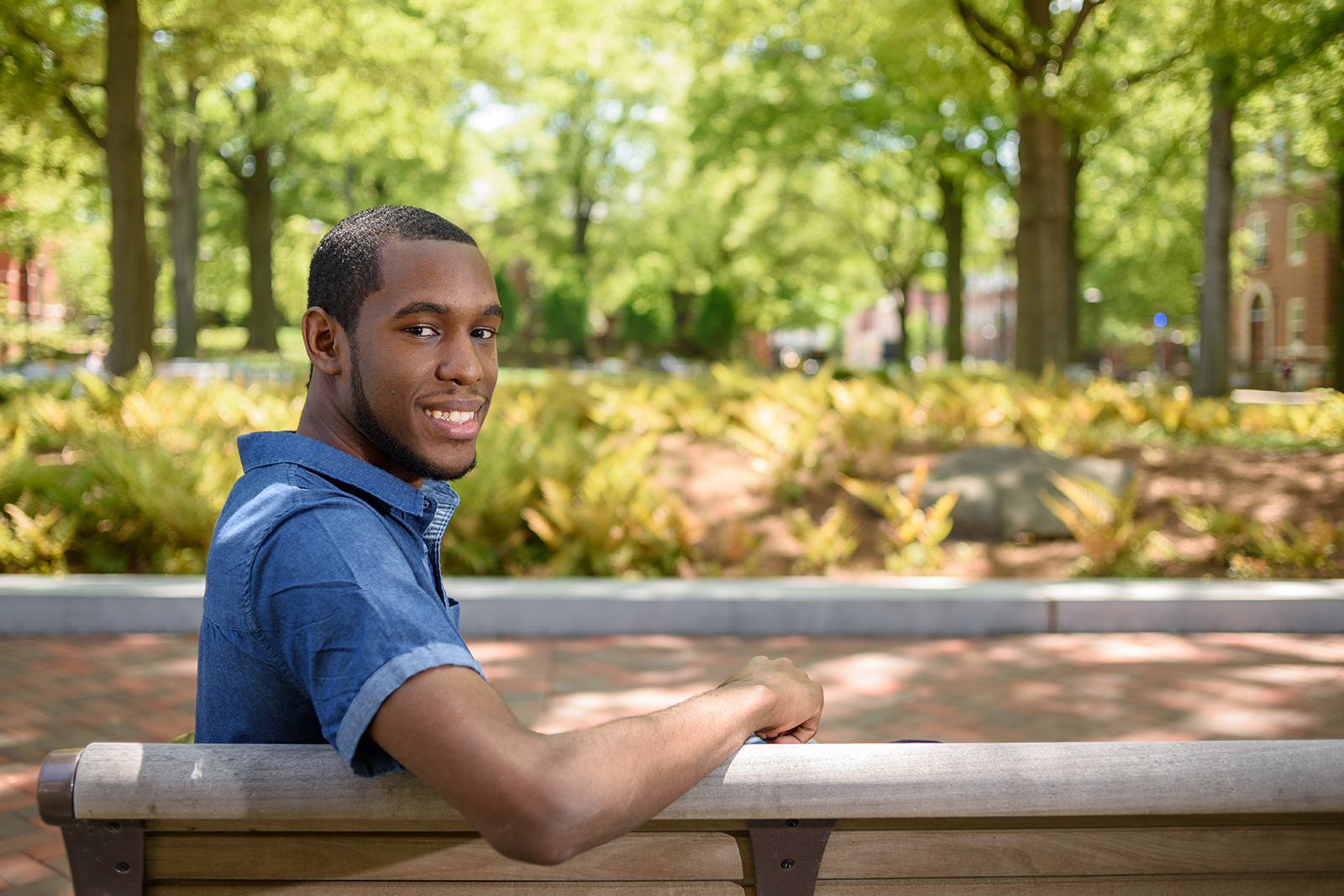 One of the things Gipson will miss the most about Tech, though, is his peers’ creative expression.

“I love seeing people create things,” he said. “The creativity and arts on campus, and arts and music in Atlanta, you can’t get that just anywhere.”

The program began in 2011 with approximately 30 participants. Today, it counts 150 and has served more than 680 students since its inception. AAMI is based out of Tech’s OMED Educational Services, which is part of Institute Diversity.

“Our overall aim is to recognize and promote excellence of black men at Georgia Tech at all levels and classifications,” said Sybrina Atwaters, assistant director in OMED. “They are often overlooked, under-acknowledged, or erroneously stereotyped.”

AAMI takes a holistic approach to growth and development, focusing on Beverly Tatum's three core ideas of creating inclusive environments: affirming identity, building community, and cultivating leadership. Some of its programming looks familiar, including mentoring, tutoring, workshops, and leadership conferences. But AAMI also hosts events such as Real Talk sessions, where students are encouraged to ask questions they may not be comfortable asking in other environments, and where they can get candid answers from faculty and alumni.

Perhaps most importantly, AAMI programming provides a space for black men on campus to call their own. 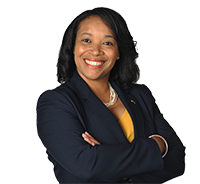 “It’s not the norm to have a group of black men gathered at Tech, or to be at a function with several black faculty members. This is special."

“For most of our students, before attending an AAMI event, they probably could only name one black male Tech faculty member,” Atwaters said. “It’s not the norm to have a group of black men gathered at Tech, or to be at a function with several black faculty members. This is special.”

The program has been awarded $360,000 in grant and institutional funding since it began, and those resources have borne results. First-year AAMI participants consistently outperform their non-participant black male counterparts and, in some years, they outperform other first-year men across the demographic board. For the past five years, the average GPA of AAMI participants has remained above a 3.0.

Through his participation in AAMI events, Gipson felt encouraged to be active on campus and give back to his community.

“You’re taught to be a leader, and there’s also an accountability you feel,” Gipson said. “People ask you how classes are going, ask you about your professors — you know they’re going to ask, and it holds you accountable to go to class and do your work.”

For Johnson, AAMI — and OMED more broadly — has made it feel like he has family on campus. Johnson is leaving Tech with a connection he can’t shake. Though he’s moving to Indiana to work for Cummins, a global fuel engine company, he’s already talking about returning to Tech for graduate school.

“I don’t know what it is, but I’ve never seen people connect with a school like Georgia Tech,” he said. Though his two siblings have attended other universities, Tech has been different. “My family and friends notice it, too. I always bring home Tech gear for them and always go home wearing Tech stuff.”

As he enters the workforce, Johnson is thinking about how he can be a leader in a new environment, but first he’ll take the time to assess the landscape.

Then, it’s time to jump in, which is what he advises other students to do as well.

“So many times in class I was the only black person, and certainly the only African,” he said. His advice to other students in similar situations is, “Don’t be dismayed. Never let that keep you from taking charge and being a leader. Embrace every opportunity you have, and do it well.” 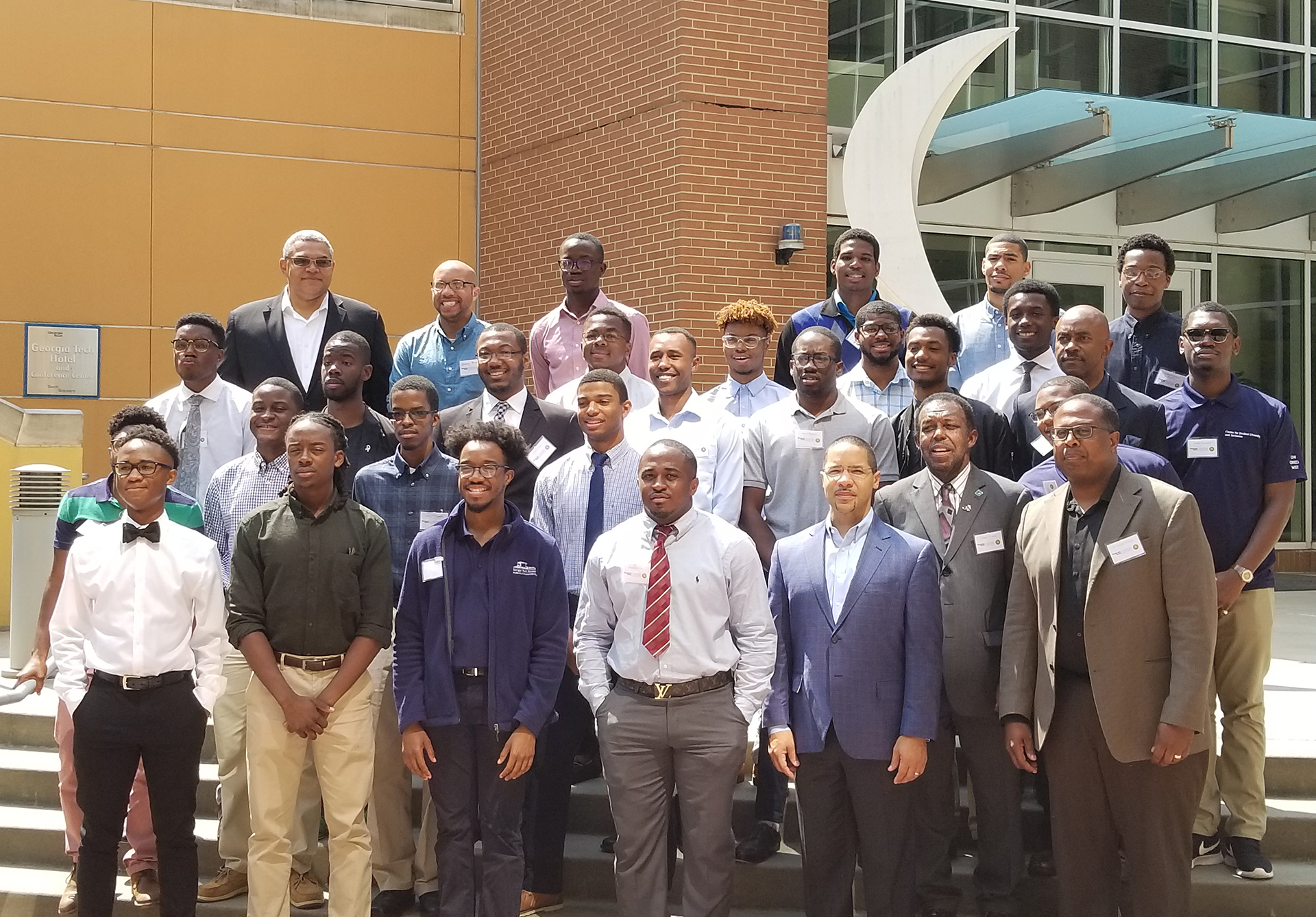 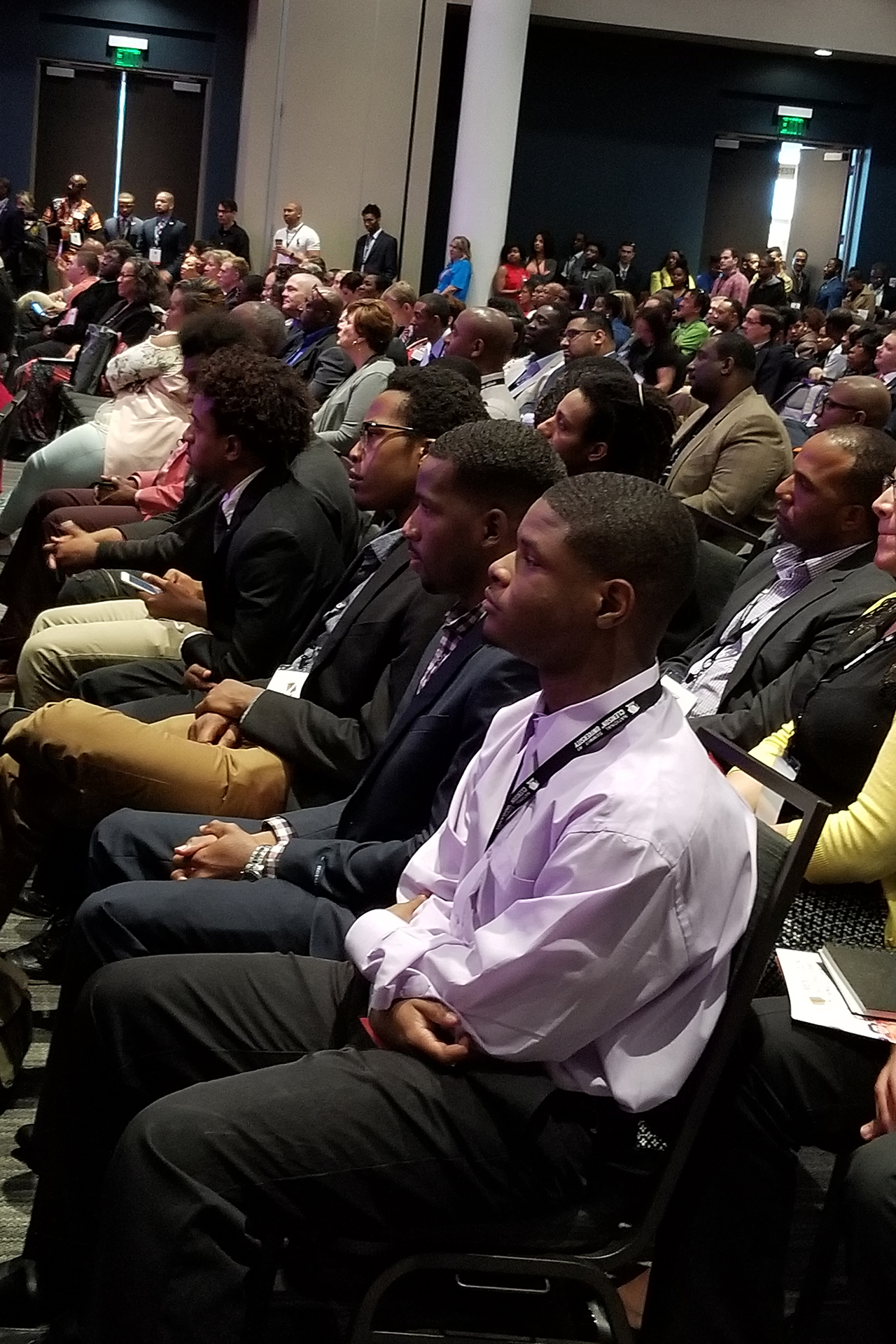 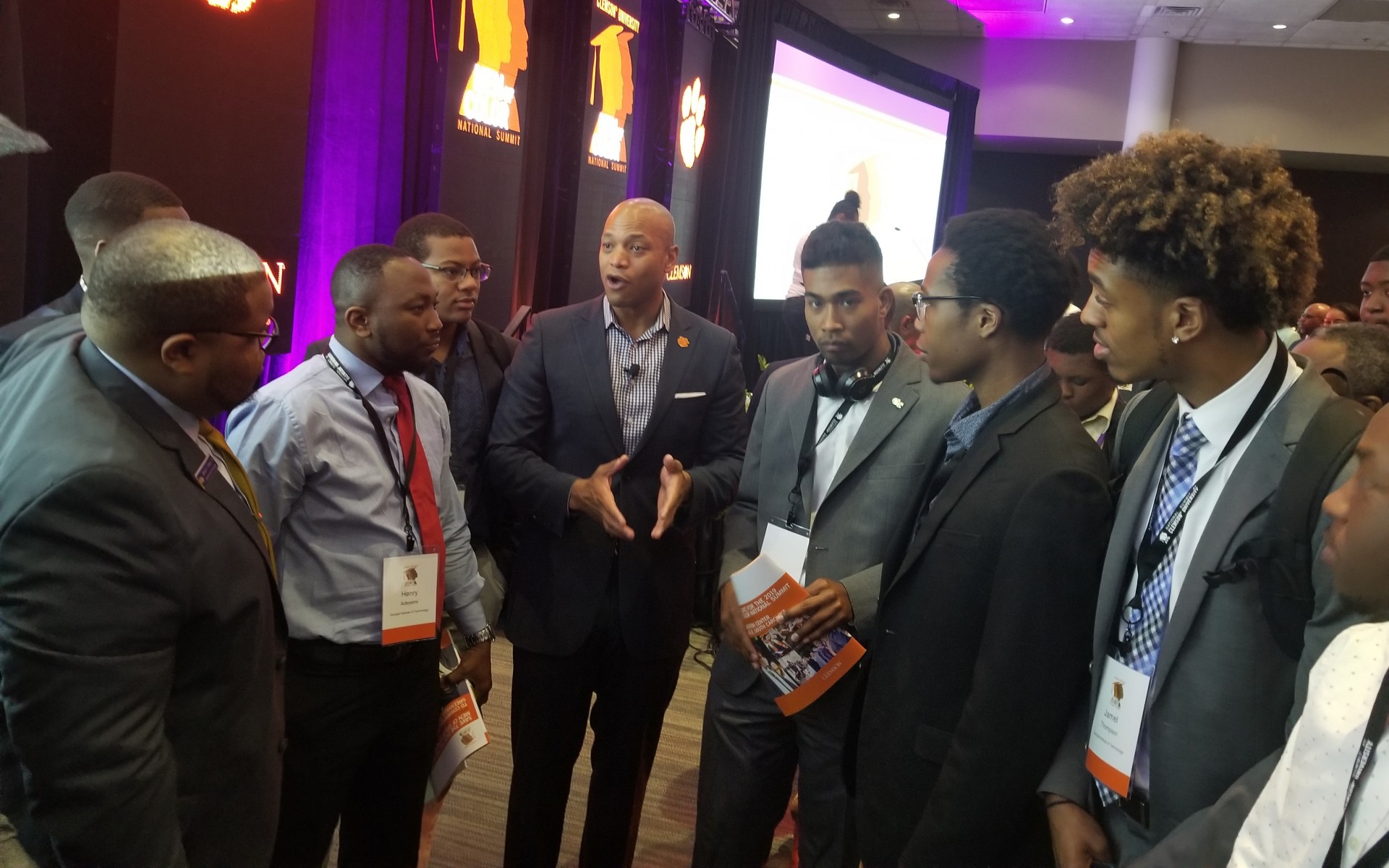 Students speak with the keynote speaker, Wes Moore (center), at the Men of Color National Summit at Clemson University. 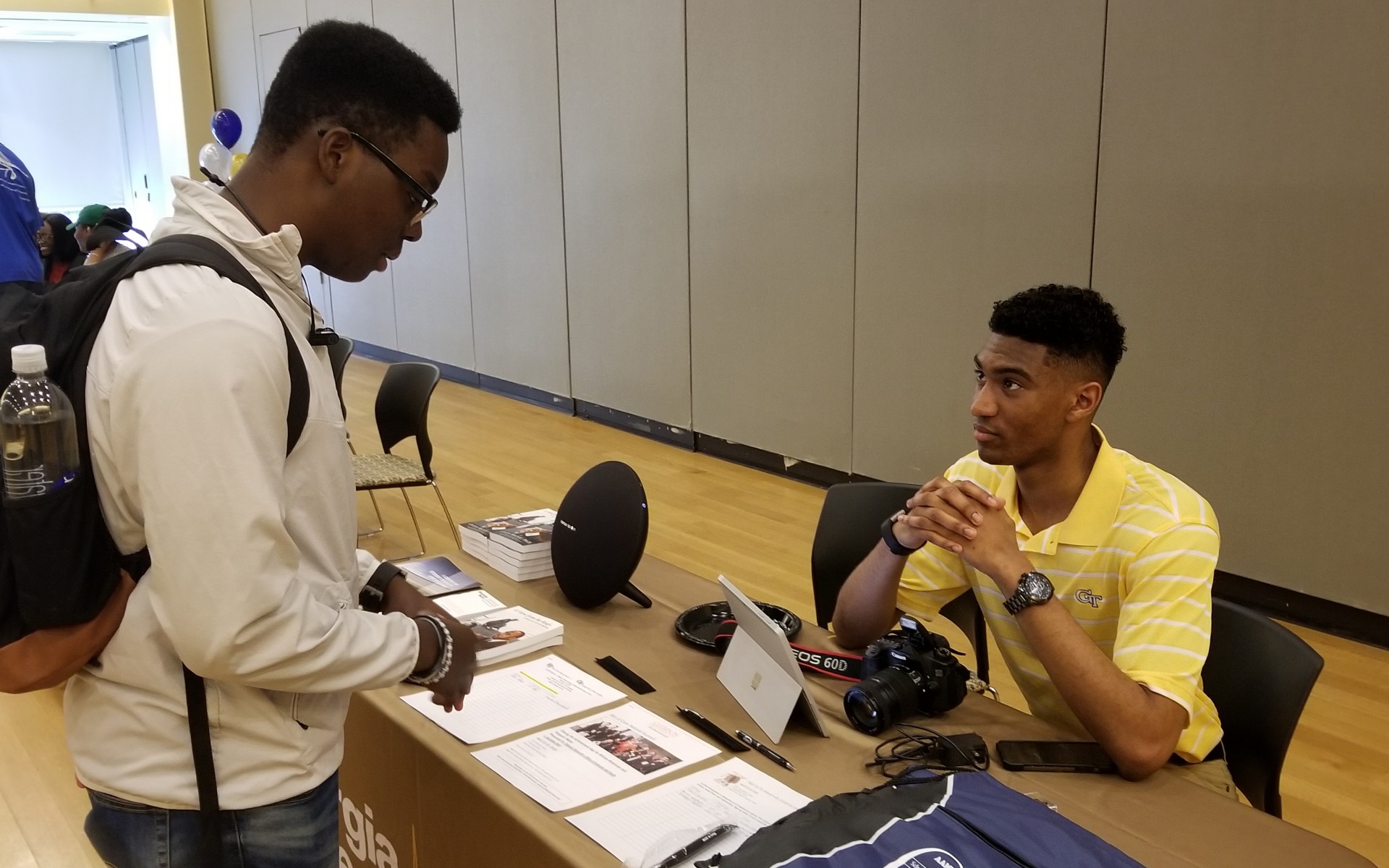