For one week a semester, Rachel Clark lives by two words: Be paranoid.

It’s not because of finals, class registration, or Dead Week — though the final item may seem applicable — but because flying socks and marshmallows are the norm and death lurks in every shadow and doorway.

Students, faculty, and staff take part in Humans vs. Zombies, or HvZ, a weeklong game of tag with short missions and strategy mixed in. Everyone except for one Original Zombie, selected by a team of admins, starts off as human, and they defend themselves against zombies by stunning them with either marshmallows or balled-up socks. Zombies are stunned for a default of 10 minutes, during which time they can’t play.

Clark, a computer science major, has had the experience of playing the whole week as both a zombie and a human. Each has its advantages, she said.

“Being a human is fun because it really tests your ability,” she said. “Every day you survive feels like a pretty neat accomplishment.” The zombie life, Clark said, is also fun, but less stressful. “It’s also more common for zombies to casually hunt in groups, which makes a great chance to meet new people.”

Number One Rule: “Don’t be a jerk.” (Read the whole rule book)

Missions are conceived and coordinated by the admin team throughout the week to give each side a chance to get an edge on beating the other. The strategically placed yellow bandanas — on the upper arm for humans, and on the head for zombies — seem to bond strangers. Admin Colin Sanders, an electrical engineering major, once had someone from a nearby building offer him a hiding place when a zombie was chasing him through a quad.

“HvZ seems to bring people from a lot of different walks of life together for this one week,” said Erikzzon Latoja, a game admin and computer engineering major.

New players need not worry about going into the game with a strategy — in Clark’s first foray, she said, she loaded up with zombie-stunning ammo by simply dumping her sock drawer into her backpack.

“Some people are really afraid of the zombies, which is interesting when people get into character,” Sanders said. “But sometimes you’ve got to fight for your life.”

HvZ is played at colleges across the country, but Tech is known for having the longest set of rules of any campus.

Daniel Valdez, a fourth-year mathematics major, has played and administered the game multiple times and appreciates the creativity people bring to the game, even when trying to find loopholes.

“People are always trying to push the limits, which I think is overall a good thing,” he said.

Valdez has been a game admin twice, but took a semester off in between because he couldn’t resist the thrill of the game.

“I just really wanted to play.” 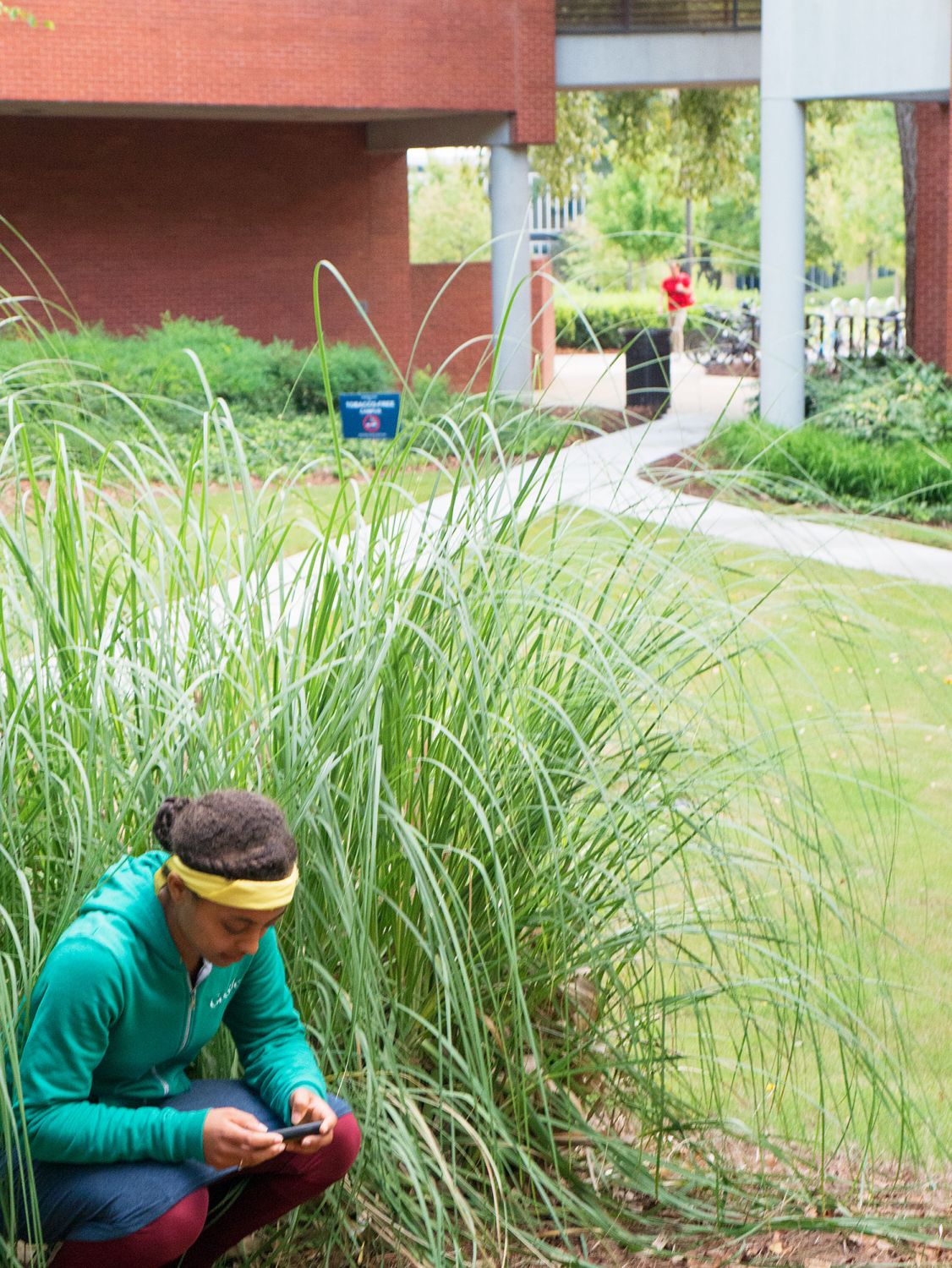 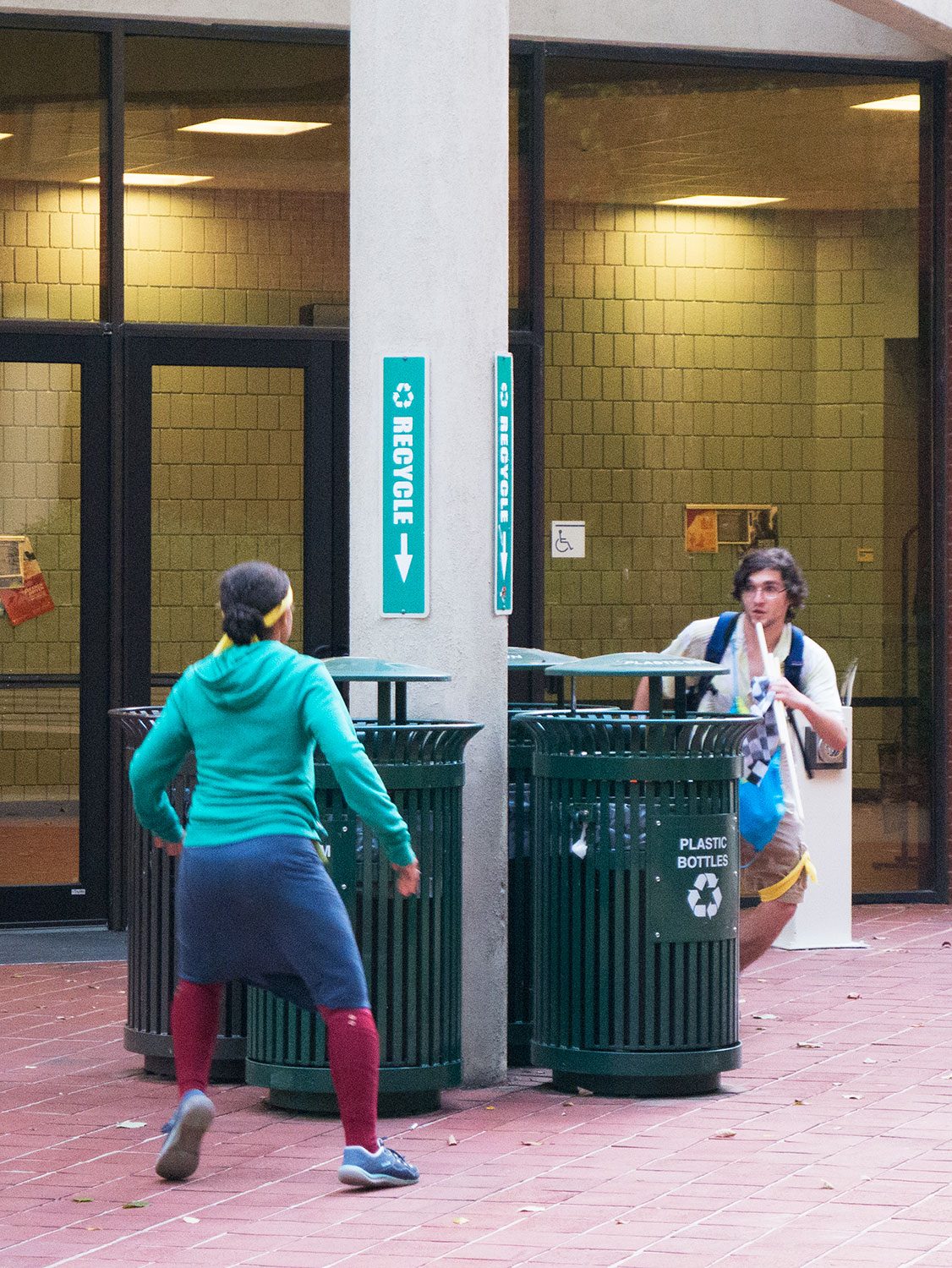 When a human approaches (as signaled by the bandana worn around his leg), the zombie tries to attack him but is repeatedly held at bay by the threat of blowgun-launched marshmallows. 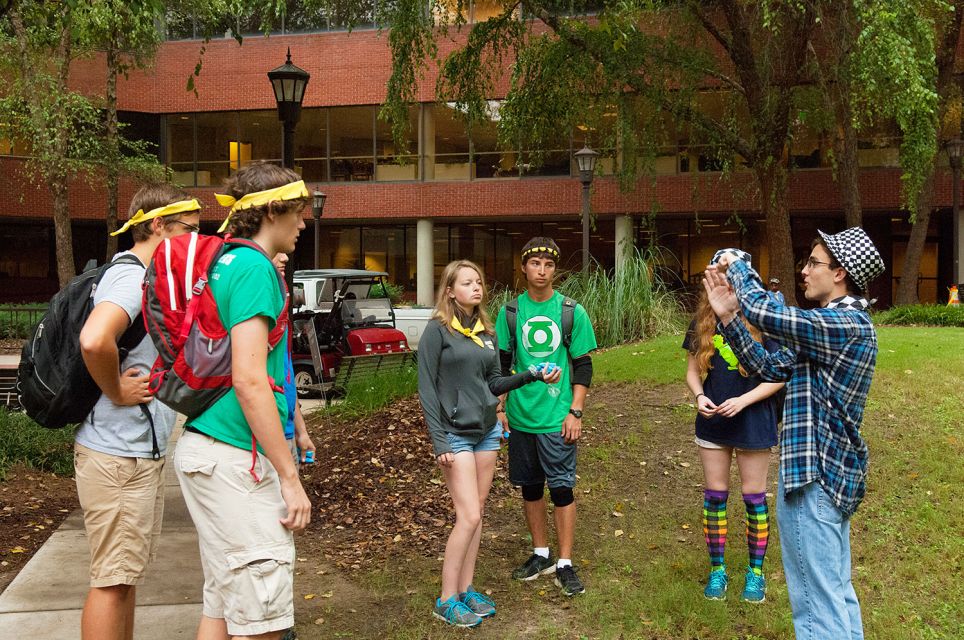 The admins, wearing checkered hats or bandanas, explain the game to the zombie players.

The zombie team must "deliver" the admin to another location via an unbroken, continuous chalk line - and defend themselves from being stunned by raiding humans at the same time.

Humans defend themselves from being tagged by zombies by stunning them with balled-up socks. A direct hit results in the zombie being stunned for a period of 10 minutes.

What’s the most important thing to remember during HvZ?

Daniel: The game is about fun. Both sides – human and zombie – are different, but really fun to play.

Erikzzon: On day one, trust no one. After that, know who your allies are, get with them, and come up with a plan of action.

What tips do you have on weaponry?

Rachel: I know a few humans who spend a lot of time constructing blowguns, and many more who go with a simple PVC pipe. Blowguns can help you get added range for stunning zombies, but they can also get jammed up and leave you defenseless.

Daniel: As long as you’re able to use it effectively, any weapon is good.

Colin: It’s really about knowing your weapon. For me, it’s just throwing socks.

Have humans ever won?

Colin: It’s been a while. The humans really have to earn it, and the zombies are getting really good at this game, so it’s tough.

Daniel: Over the last couple games, the humans have definitely had a chance. The last few times they’ve either made a big mistake or used a bad strategy.

How similar is the admin team for HvZ to the admins of The Hunger Games?

Colin: We’re really devious. We come up with all these different ways for players to have fun and new things.

Daniel: One of the most fun things administering is when you design a mission and expect the players to do one thing, and they do something completely different that works. It’s cool to see how all the players are able to think and plan in a way that we never thought of.

Erikzzon: We always put in a possibility for one side or the other to win, but it’s always really cool to see the creativity players come up with on either side.

Infographic: A network of infection 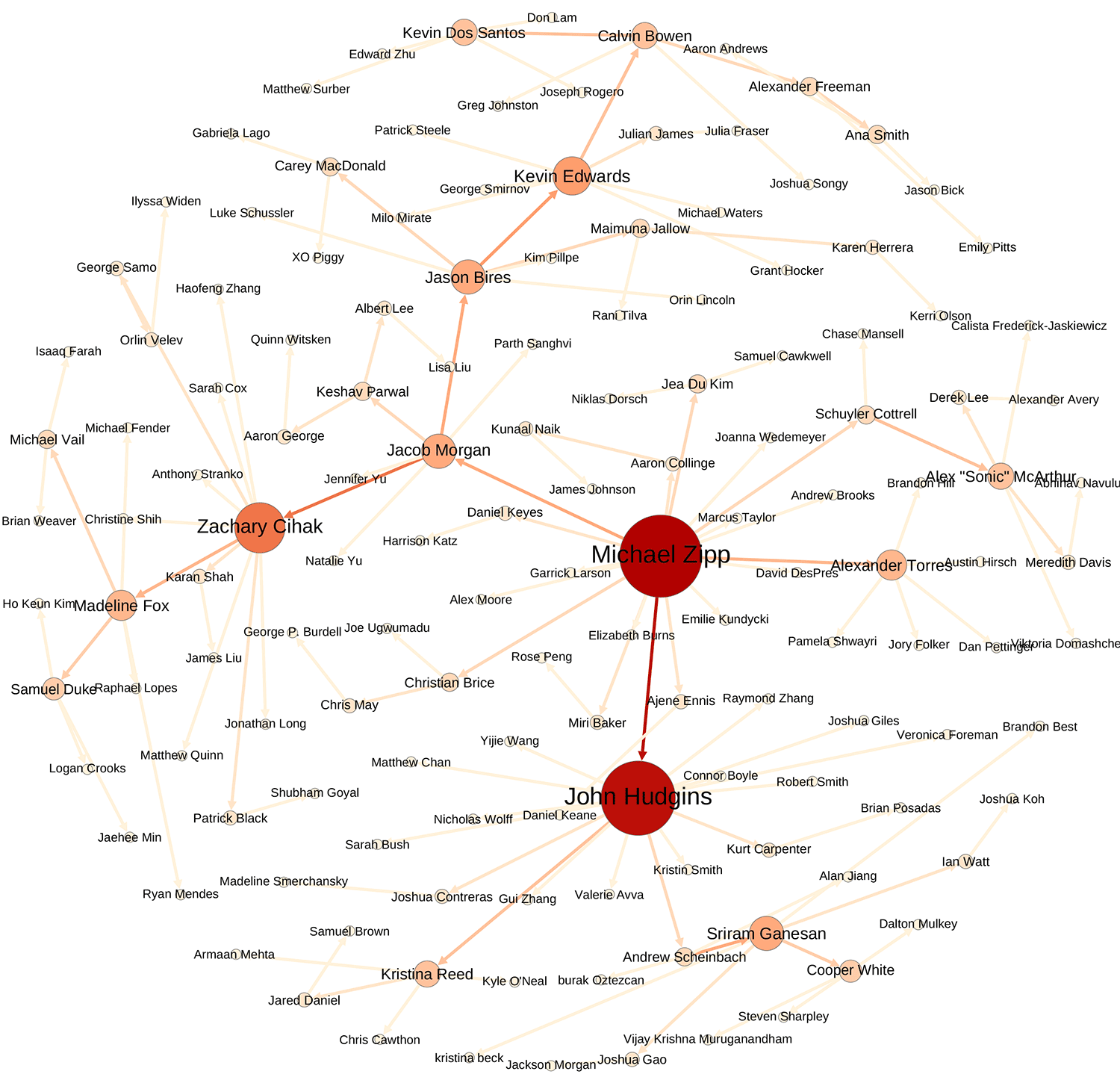 When the game begins, all players are human, except an original zombie who is designated by the admins. The "OZ" spends one day in stealth mode — he or she is not marked by a bandana but can turn human players into zombies.

The original zombie of this semester’s game was Michael Zipp. His “first blood” — the first human killed — was John Hudgins. As the game progressed, zombie players who tagged human players reported to the “killboard” on the Humans vs. Zombies website.

This graphic uses the data from the killboard to map the progression of tags from one player to another. Out of 206 players who ended the game as zombies, only 46 players reported kills, and only 25 zombies killed more than one human. Michael Zipp had the most, with 18. John Hudgins was a close second, with 16.

George P. Burdell is considered a "professional human" and has proved to be impossible for zombies to kill, said admin Colin Sanders. In the spirit of the game, Burdell humbly offers his player code to zombies who complete a particularly heroic task. This semester, Burdell's player code was awarded to Chris May for getting the last hit during a mission.