Gary Schuster Reflects on Time at Tech and Latest Honor

To the uninitiated, Gary Schuster can be hard to read. He takes full advantage of that.

“I have a somewhat unusual sense of humor,” he said. “I think it can be used as an effective communication tool; it’s rarely direct, almost always oblique. It forces people to think, ‘Is he kidding?’”

And, at that point — he’s won; they’re thinking and engaged.

Schuster, the Vasser Woolley Professor and Regents Professor in the School of Chemistry and Biochemistry, uses that technique with his students when teaching organic chemistry. For example, an important topic is something called intermolecular forces — those that operate between molecules. He introduces this topic by first asking an unexpected question: "Have any of you ever taken a bath?"

“They look at each other like, ‘Is this guy absolutely crazy?’” he said. Then they cautiously raise their hands to answer yes.

Schuster follows with, “Did you dissolve?”

They shake their heads no. So, then he asks, “Why not?” which leads to a discussion of hydrogen bonding, hydrophilic and hydrophobic forces, and other intermolecular interactions.

“They’re thinking and engaged, and I hope all of them will understand intermolecular forces,” he said. “But, I guarantee everyone comes out knowing why they don’t dissolve in water.” 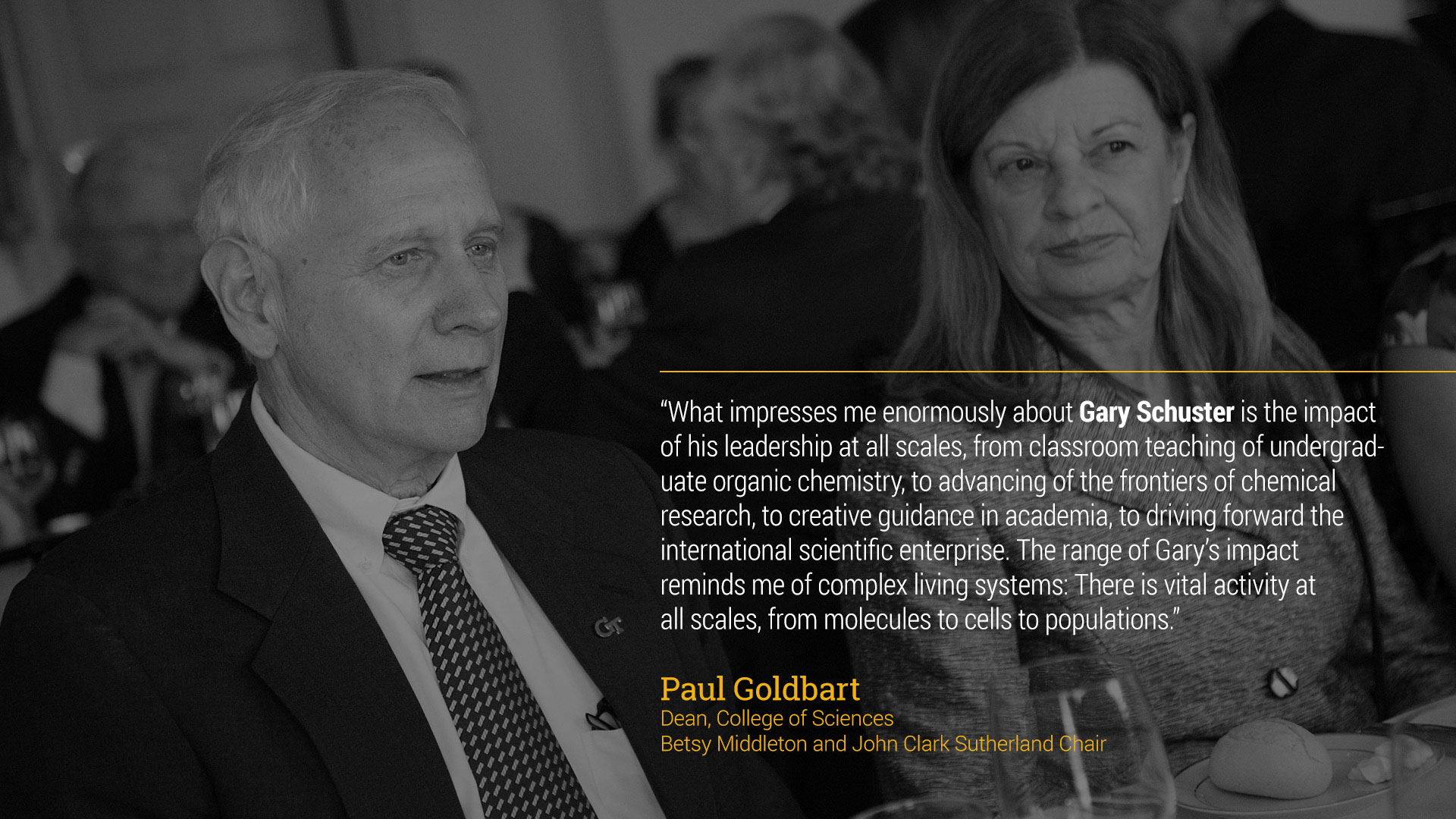 Schuster and his wife, Anita. Photo by Camille Pendley

His Early Days at Tech

After 20 years at the University of Illinois Urbana-Champaign (UIUC), Schuster arrived at Tech in 1994 — a couple of months before then-President G. Wayne Clough — to be dean of the newly established College of Sciences.

Georgia Tech had come through a crisis that resulted in the resignation of President John Patrick Crecine.

“Clough arrived at exactly the right time,” Schuster recalled. “It was like a breath of fresh air. The campus was ready to turn a page, and the framework for that transition had been constructed by the reformulation of the academic structure of the campus.”

The state of Georgia also was focusing on higher education, with then-Governor Zell Miller instituting the HOPE Scholarship Program.

“In order for great strides to be made there has to be a confluence of supporting factors,” Schuster said. “And, there was. The HOPE Scholarship Program helped make Georgia Tech much more attractive to the best in-state students. Those students have options, and after HOPE more chose to come to Tech.”

But the changes extended further than that, according to Schuster, who noted that Clough brought with him a vision for what Georgia Tech could become.

“Wayne Clough had been a student at Georgia Tech. And there was a unique attachment and emotional connection that he felt with Tech.”

Schuster remembers an early conversation with Clough that helped form his vision of the path Tech would follow.

That ‘building’ eventually grew into the Institute for Bioengineering and Bioscience, and into many of the things you see and associate with Georgia Tech today, Schuster said.

“It was that vision that energized me and the others around that table to think big; make no small plans,” he said. “So, we made big plans, and the fulfillment of those plans changed the culture and the character of Georgia Tech.” 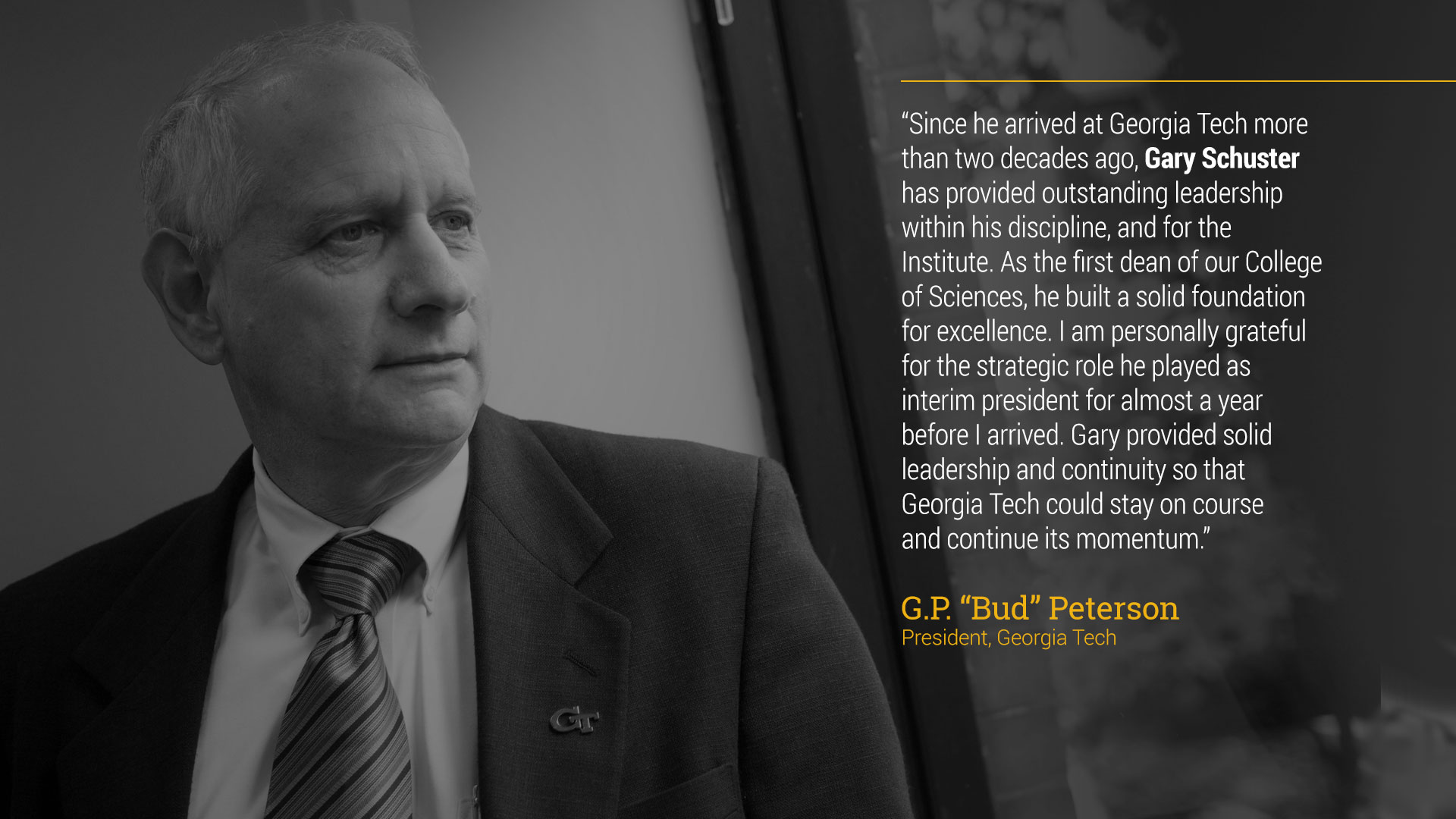 Schuster said that in those early years, particularly in the sciences, there was often the sense that Georgia Tech could not compete to get the best or be the best.

“Slowly, because of the optimism and the making of no small plans, that attitude changed to that which we know today: We’re Georgia Tech. We can do that. We compete with the best. And we win. We’re not going to win every time, but we’re in the game,” he said.

Changing the attitude of an institution in such a fundamental way is not an easy thing to do, Schuster said.

“Somehow the culture changed. You don’t do that by demanding or commanding. You do that by leading by example and fulfilling your promises,” he said. “I was fortunate to be a part of that. The recognition of that energized me and energized the campus. And, it’s an energy that we still feel today. The challenge, of course, is to stay on that trajectory. That is especially true in today’s environment.”

Schuster recalls the economic crisis of 2008, when he was interim president. Because of fiscal necessity, states were required to drastically reduce their support of higher education.

“[The financial support] has not yet been fully restored,” he said. “Now, we live in an era of political skepticism where the opinion of experts on complex matters is valued no more than the opinion of professional pundits whose objective is to create news rather than to report it.”

Schuster said that, “for a university to prosper in that intellectual, political, and fiscal environment requires nuanced and thoughtful leadership. We are very fortunate that President Bud Peterson is a superb tactician who knows there are rocks near the shore, and carefully steers the ship between them. Georgia Tech is fortunate to have strategic leadership in the face of uncertainty and criticism.”

Schuster said he has great expectations for Georgia Tech.

“I’m 100 percent confident that Tech will continue to strive toward excellence in all of the many things it does.” 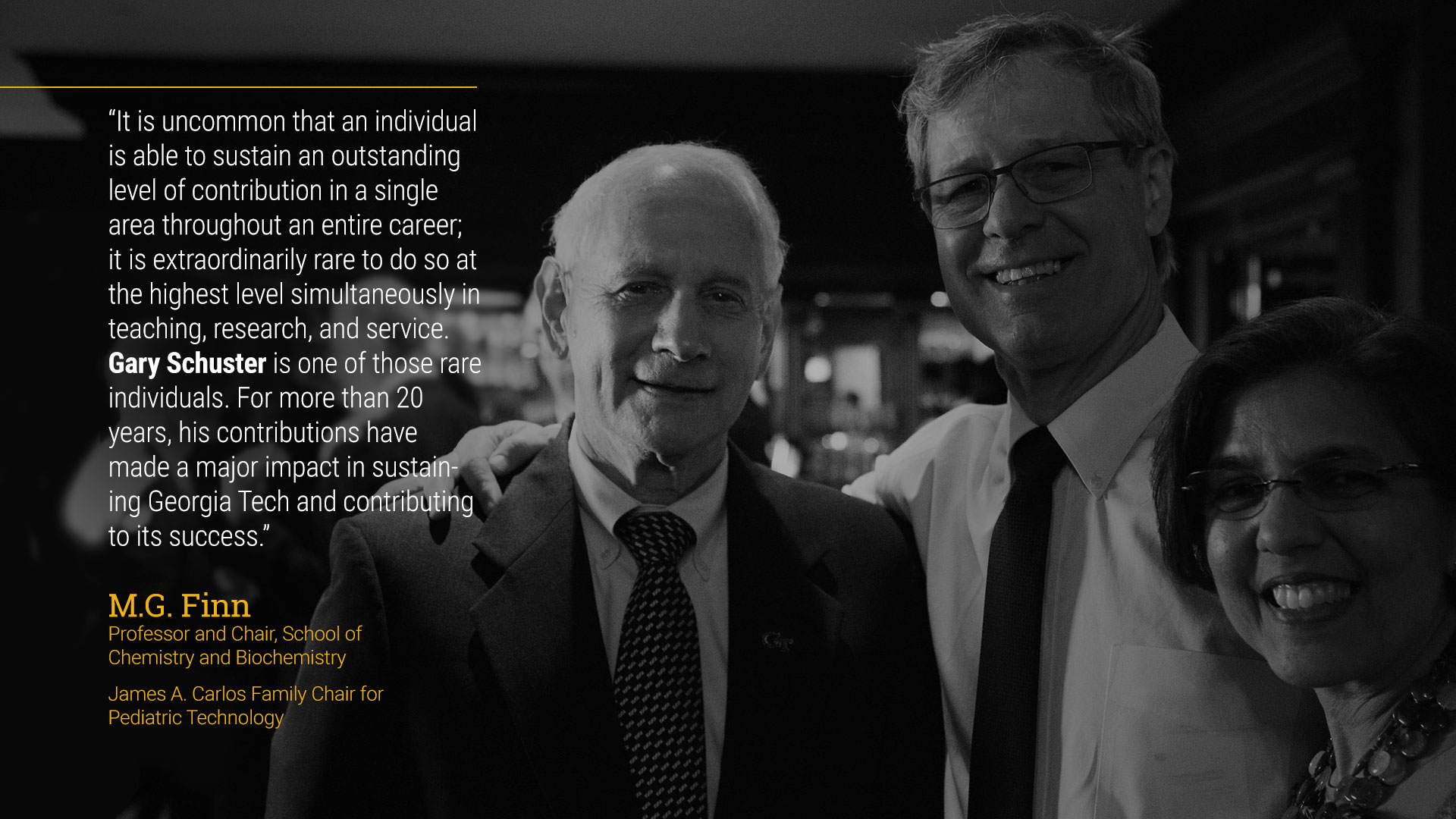 Following his time as dean of the College of Sciences, Schuster served as Tech’s provost and executive vice president for Academic Affairs from 2006 to 2010 and as interim president from 2008 to 2009.

Schuster is now the recipient of Georgia Tech’s highest award given to a faculty member: the Class of 1934 Distinguished Professor Award.

The award recognizes outstanding achievement in teaching, research, and service. Instituted in 1984 by the Class of 1934 in observance of its 50th reunion, the award is presented to a professor who has made significant, long-term contributions — contributions that have brought widespread recognition to the professor, to his or her school, and to the Institute.

“Being recognized with the Distinguished Professor Award is a great honor — as great an honor as any that I have received,” he said. “But, I think it’s necessary for me to acknowledge that my accomplishments are really the contributions of many others. I am eternally grateful to my colleagues at Georgia Tech, to my students, and to the institution itself for having provided me with the opportunity to be here, to learn here, and to be a part of Tech’s transformation.”

Schuster, who is retiring this year, was joined in early April by about 25 of his former students who came from as far away as Japan to celebrate with him at a dinner party.

“People said nice things about me. Some of which were true,” Schuster said. “Many of them recounted small things that I said or did that provided a pivot point for their lives and changed their direction, helping them become the success they are,” he said. “I feel grateful that I had the opportunity to help guide so many people over the past 45 years or so. It has been my good fortune to have been allowed to be a professor at Georgia Tech. It’s a privilege that I get to do exactly what I love doing: interacting with students, guiding them to a future in an uncertain world, and helping them through the challenging spots in their professional, and sometimes personal, lives. This has been a gift given to me that I strive to deserve.”

Schuster is also quick to share his scientific accomplishments with his research students and colleagues. 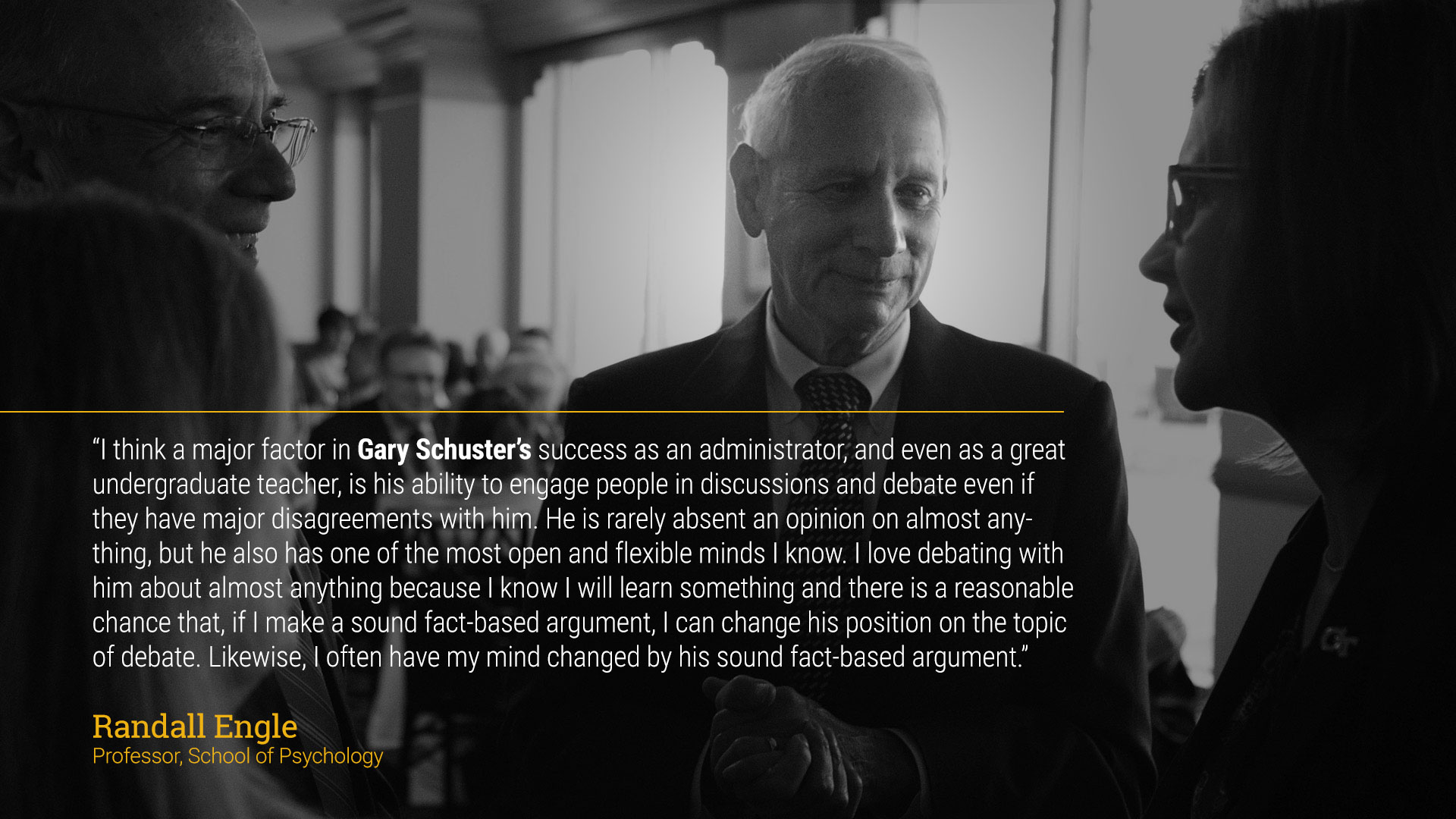 In acknowledging the contributions he made that advanced science and technology, he responded by re-telling what he recently said to his students when they were gathered for dinner. “Ideas aren’t even worth stealing. It’s making them work that’s the hard part. Most ideas don’t work as conceived. They have to be tried and modified. What succeeds and what fails has to be figured out, and that’s where it gets difficult. It’s my students who solved those problems; they deserve the recognition for whatever achievements we’ve made.”

“Another factor is my colleagues here at Georgia Tech,” said Schuster, who came to Tech to be dean of Sciences and was appointed professor of chemistry and biochemistry.

“I understood it with a baseball trade metaphor,” he said. “I came to Tech as dean, and the chemistry professor was like the ‘player to be named later.’ You don’t know exactly what you’re going to get but you suspect it’s probably not going to be very good,” he said. “But my colleagues in chemistry and other disciplines throughout Georgia Tech immediately welcomed me, accepted me, and supported me throughout the 23 years that I have been on this campus both as an administrator and a faculty member. It’s their support and contributions that have allowed me to do the things that we have done.”

When asked what retirement will look like for him, Schuster replied, “I am retired, but working. What that means is that I don’t come in on Fridays.”

He continues by collaborating with colleagues and by co-advising doctoral students and postdocs.