From Ivory Tower to Invention Studio

One rainy, blustery day last spring, Georgia Tech hosted a contingent of faculty and administrators from MIT who had come to ask questions and take a look around.

Apparently it’s a concept whose time has come. MIT is just one among dozens of universities that have visited, including Virginia Tech, Rochester Institute of Technology, Rensselaer Polytechnic Institute, Vanderbilt, University of Florida, Yale, and Southern Methodist University.

It’s not so much the fabrication and prototyping capabilities these schools want to emulate — virtually all engineering programs have a professionally staffed machine shop filled with state-of-the-art tools — it’s the culture.

“The Invention Studio has fundamentally changed the culture at Georgia Tech,” says Associate Professor of Mechanical Engineering Craig Forest, who founded the facility in 2009.

He envisioned it as a place where mechanical engineering students could bring their senior Capstone Design projects off the page and into the real world, but soon it evolved into a “design-build-play” environment for students at every level and across disciplines.

It’s as if the Invention Studio has brought Georgia Tech full circle. When the school first opened in 1888, the busiest door was into the “shop,” with a tactical, practical curriculum that was designed to get students’ hands dirty.

By the mid-1930s, engineering education at Tech and elsewhere had become more theoretical, with a focus on paper-based mathematical modeling. In recent years, however, with the tide turning back toward experiential learning, Georgia Tech has been among the first and (if interest in the Invention Studio is any indication) best schools to catch and ride the wave.

“These schools that visit wish they could also create a facility that’s run by students that allows anyone on campus to design and build things,” Forest says. “They’re looking at us as an example of how they might set up their own facility.”

According to The Invention Studio: A Student-led Fabrication Space and Culture (a paper that Forest and his colleagues Amit Jariwala, Julie Linsey, Roxanne Moore, and Christopher Quintero presented at the 2014 Capstone Design Conference), the formula that sets the Invention Studio apart from maker spaces at other schools is that it is:

Of course, the “how” of the Invention Studio wouldn’t be attracting so much attention if the “why” weren’t also compelling. Part of the answer to that is in the numbers: More than 500 students use the facility each week. The generous donations from industry sponsors speak for themselves.

Chad Ramey (computer science) and Joshua Terry (mechanical engineering), both Makers Club execs and undergraduate lab instructors, spend a lot of time in the Invention Studio's 3D printing room. Each room has a sign thanking the industry sponsors that help make the Invention Studio possible. "I've gotten exposed to a lot of things I wouldn't have otherwise, like 3-D printers, laser cutters, water jet," Terry says. "They're all very expensive tools, and the fact that we have access to them — you get experience with industry-grade technology before you even go into industry."

Approximately 30 percent of the Invention Studio’s financial support comes from the Technology Fee Fund, which students pay into along with their tuition. Another 15 percent or so comes from research funding and private support.

To cover the remainder of the facility’s equipment and operating costs — which average about $200,000 per semester — more than 30 industry sponsors step up through contributions to the Capstone Design course.

The course solicits these sponsors for real-world projects, for which they receive a report and a working prototype of the solution, which is often designed and fabricated in the Invention Studio.

For example, one Capstone Design Expo winner —  a team called Nuttin’ But Trouble —  redesigned an industrial pecan-cracking machine for the Harrel Nut Company that could save the company an estimated $7 million a year.

Another winning team created a lug nut starter for GM that is projected to save up to $1 million per plant per year, and the winning team from spring 2014 – sponsored by Smith and Nephew – devised a better way to insert screws into the metal rods that hold fractured femurs together.

"The moment [recruiters] see Invention Studio on a resume, they know this is the person to hire." – Academic Professional Amit Jariwala

Industry also benefits when it comes time to recruit, Forest says, noting that Georgia Tech is rated the No. 1 engineering school in the nation by industry recruiters.**

“At the beginning of the semester, about 10 percent of the students in the Capstone Design course already have jobs; the other 90 percent are looking for jobs,” Forest says. “We invite companies to participate, companies who want to recruit these students, so it’s a really great match.”

Academic Professional Amit Jariwala, who oversees Invention Studio operations for the Woodruff School of Mechanical Engineering, has noticed that recruiters also look favorably at undergraduate lab instructors (ULIs). “They want students who have been in the studio for their leadership, mentorship, and training experience, who have an awareness of what it is to take charge of a place,” he says. “The moment they see Invention Studio on a resume, they know this is the person to hire.” 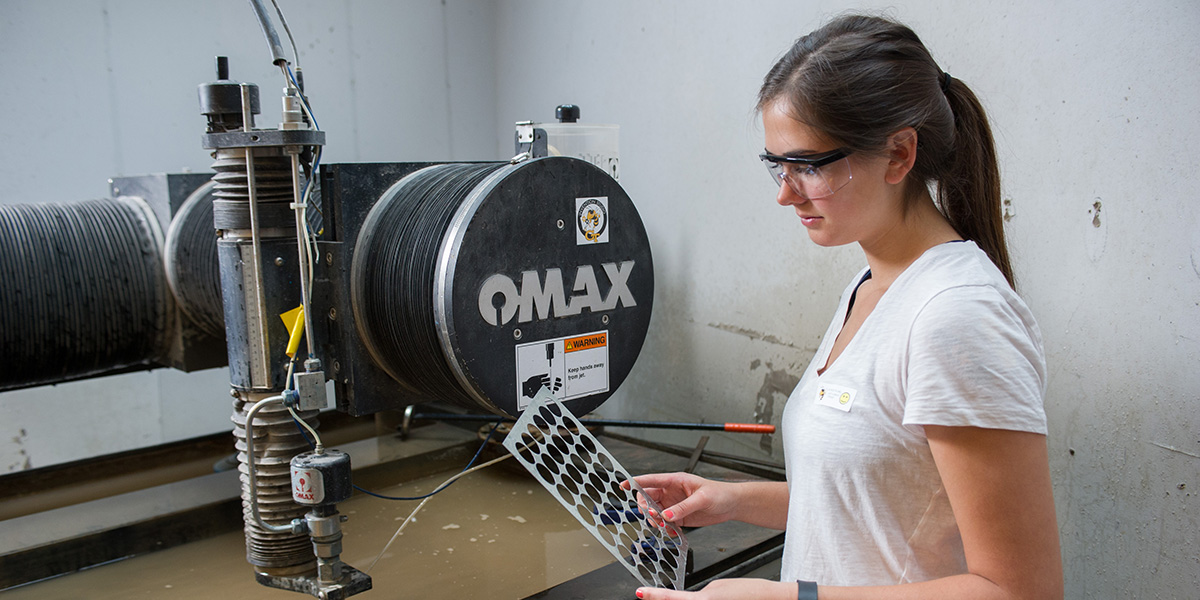 Erin Cobb, an industrial design major in the College of Architecture, is using the Invention Studio’s most expensive piece of equipment, the water jet machine. "I knew from a couple of courses that water jet cutting was the absolute right way to go with this project, but I had never touched the technology before," she says. "I came in, took about five minutes to set up ... I think what really makes the Invention Studio are the students who run these shops. They're incredibly knowledgeable and helpful and truly passionate about what they are doing."

It’s generally agreed that without undergraduate lab instructors there would be no Invention Studio.

“Five rooms, five full-time staff —  that would be too much,” Jariwala says. “So what we have done is allow students to take the lead. You walk in, see the green arm band, that’s the ULI who’s here to provide training and safety supervision for any student who comes in.”

"The Invention Studio showed me it’s important to be social with people around you. Working on a project, you get exposure to a lot of other people and their advice and experience." – ULI Joseph Pham

The ULIs work through a student organization called the Makers Club, which “owns” the Invention Studio and has more than 70 members, from not just engineering, but also from the sciences and architecture. The club organizes social events and “hacking sessions,” takes care of maintenance and repairs, and has authority over equipment purchases and placement.

Joseph Pham, a mechanical engineering student and ULI in the wood shop, puts in his four hours a week and then some, for which he earns 24/7 access to the rooms and tools. He says the experience has added an interpersonal element to his academic experience.

“A lot of schools, it’s all about the book work, for the most part,” he says. “The Invention Studio showed me it’s very important to be social with people around you. Working on a project, you get exposure to a lot of other people and their advice and experience.”

The weeks leading up to the Capstone Design Expo are especially busy for ULIs. Pham helps students like Carmie Cuda, a biomedical engineering student who is putting the finishing touches on a component of her team’s project that was fabricated in the adjacent 3-D printing room. This was the third prototype of their vein detection device, called IdentiVein.

“We had our initial design where we could bring it to customers and figure out if they would actually use it,” Cuda says. “They were like, that’s chunky, I don’t want to hold it. So we adjusted to this mouse sort of thing, which is more intuitive.”

Another name for 3-D printing is rapid prototyping, Pham points out. “So this is a great opportunity for students to test out their projects.”

Mechanical engineering student Joshua Terry is working on a midi controller for personal use in the 3-D printing room. “Picking up something and making it work – that’s why I wanted to become an engineer,” he says.

The Space to Be a Dreamer

Not all projects underway at the Invention Studio are for class. Looking at the “Purpose” column of the log for the water jet machine the morning of their tour, the visitors from MIT would have seen “personal, personal, fun, personal, capstone.”

Cutting boards are huge in the wood shop, Pham says, as are fraternity paddles. Joshua Terry, a mechanical engineering student who’s been a ULI for more than four years, originally came into the Invention Studio because he likes making knives by hand; now he’s more into electronics. “I’m building this midi controller to control this DJ software called Tractor; it’s like a drum machine,” he says.

"It just encourages you to try everything." – ULI Joshua Terry

Working in the Invention Studio has helped him stay motivated and become a better student, he says.

There haven’t been any empirical studies yet about the Invention Studio’s impact on factors like student performance and retention, but Forest says they’re on it. His colleague Julie Linsey, assistant professor in the Woodruff School of Mechanical Engineering, has a research proposal currently under review with the National Science Foundation.

She may want to talk to Terry. “If there weren’t something like the studio around, I probably would have gotten a lot more discouraged early on,” he says, “especially in an environment like Tech, where academics are very intense.” Terry has had such a good experience with the Invention Studio, he wants other people to have it, too.

“I think creativity is fostered in an environment like this where you can come in with very little barrier to entry,” he says. “It just encourages you to try everything, which I see all the time, the things people work on.”

Cuda, sanding the rough edges off her prototype, makes a similar observation. “I’ve seen people do really artistic stuff, like take a piece of cardboard and cut their name out … it’s so precise and looks so sharp,” she says. “Having this sort of stuff available makes you feel uninhibited with your creativity … it gives you the space to be a dreamer, you know?”

Invention Studio users luck up with free food scavenged from an event nearby.

Students devised and installed their own dust collection system for this CNC router in the wood shop.

Biomedical engineering student Janki Patel is 3D printing her redesign of a medical device with the assistance of ULI Michael Gerov. “You can pause it, but if it messes up, you have to start over,” she says. Fortunately, the plastic used for 3D printing is recyclable.

This miniature replica of Tech Tower was made by a student using a combination of CAD and 3D printer technology.

Mechanical engineering student Joshua Terry is working on a midi controller for personal use in the 3D printing room. “Picking up something and making it work – that’s why I wanted to become an engineer,” he says.

Erin Cobb, an industrial design senior in the College of Architecture, is using the Invention Studio's most expensive piece of equipment, the water jet machine.

The three laser cutters in this room can cut metal, plastic, acrylic and wood. The water jet machine in the corner uses sand and water to cut through up to six inches of steel.

The equipment in this room is considered the most dangerous to use. As an extra safety precaution, any student to use one of these machines must have a “buddy.”

This lounge area, where students can gather to study or work on projects, is part of the Invention Studio.