The last thing business major Shannon Mehl wanted to do when she enrolled at Georgia Tech was work as a co-op student. 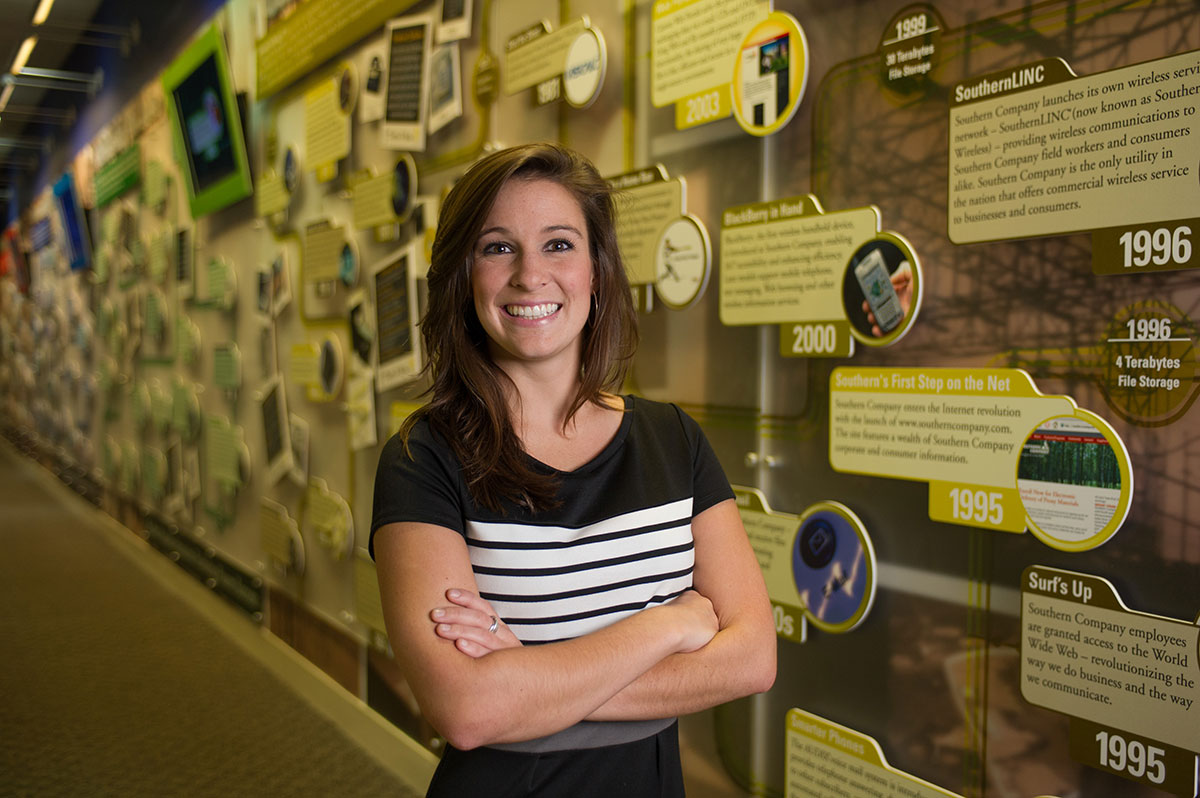 “I can honestly say co-oping has been the best decision I’ve ever made in college, and now I preach it to everybody.” - Shannon Mehl

“That’s not for me. What if I don’t like the job? I don’t want to be stuck for three semesters,” she remembers thinking. But then she went to a co-op information session and started asking around. Soon, she was sold.

Now a senior with her third and final co-op semester just behind her, Mehl is not just a fan of cooperative education, but an advocate.

“I can honestly say co-oping has been the best decision I’ve ever made in college, and now I preach it to everybody that comes through,” she says. “The freshmen I meet, I tell them, if you can co-op, do it and do it early.”

It’s apparently not a hard sell. Thirty-five percent of Georgia Tech undergraduates at some point alternate their on-campus semesters with three semesters on the job. In fact, Georgia Tech has the largest voluntary co-op program in the nation.

Definitely Not Getting Coffee

Now in its 102nd year, Georgia Tech’s co-op program is the fourth oldest in the nation. The program started in 1912 with 12 students and a handful of “cooperative” employers, and in 2012 it boasted 1,387 co-op students and 321 participating employers, with hundreds more in its database.

For Wayne Thompson, director of the Cooperative Education Program in Tech’s Center for Career Development and Discovery, the question isn’t “Why should students co-op?” it’s “Why wouldn’t they?”

There’s the immediate financial benefit — co-op students do not pay tuition for the semesters they work and their earnings typically start around $16 an hour. One employer – admittedly an outlier – starts Georgia Tech co-ops at $32 an hour, Thompson says.

Then, as these going rates would suggest, there’s the quality of experience employers are providing. Co-ops are definitely not getting the proverbial coffee.

“The co-op program is in Academic Affairs, and assessment is a very important part of what we do,” Thompson says. “Our intent is for students to go to their place of employment and get experience related to their major. Our program has objectives, and we’re evaluating the relationship that the student has with their employer.”

At the beginning of each co-op semester, the student and his or her supervisor generate an assignment record that details the types of training and experience that will take place during the term. At the end of the semester, the supervisor submits a performance evaluation for the student. Co-op advisors review each evaluation to ensure that the student is getting the kind of experience they signed up for. If they see any red flags, they contact the student and employer, but these instances have been rare, Thompson says.

“If what an employer is offering is not going to benefit the student other than financially, they need to look for other sources outside of our environment, outside of our students,” Thompson stresses.

A Win-Win-Win for Employers

For many co-op employers, Georgia Tech’s program is an indispensable pipeline for promising permanent employees.

Kristen Donnell, the campus recruiter for Georgia Power and its parent, Southern Company, says they employ as many as 250 co-op students at any given time with an eye toward future needs. 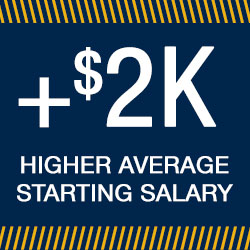 Each co-op is paired with a supervisor as well as a “buddy” in their department who works with them every day to get them “up to speed,” Donnell says. They even have an organization called “Students of Southern Company,” where co-ops and interns can meet, do “lunch and learns” with executives, go on plant tours, and more.

Mehl was one of those “Students of Southern Company.” The biggest challenge for her, at first, was learning to ask questions.

“When you come in, you definitely want to be that smart Georgia Tech student who knows how to do it. You don’t want to have to ask questions, but truly, you have to get past that,” she says. “And you definitely learn from the mistakes you make!”

Every co-op semester, Mehl says, she was given more responsibility, and she hopes to one day get a job offer.

“Our program is modeled to prepare students to become full-time employees when they graduate, ” Donnell says, pointing out that many of their senior executives and engineers started out as co-ops. “We really put a lot of value into the program, and our leaders do as well, given that many came from the same program and have been here for 25, 30-plus years.”

Georgia Power is one of Tech’s largest and oldest co-op employers, having hired its first co-op student in 1920, but the co-op program serves smaller, up-and-coming businesses as well.

One of Georgia Tech’s newest co-op employers is metro Atlanta-based Nead Werx, a custom software development firm. Georgia Tech alumnus Nick Downey (Computer Engineering 2002) started the company as a one-man shop out of his dorm room when he was himself a co-op student.

Once he got out into the job market, he suggested to his first, and then second employer that they try cooperative education to help meet their staffing needs.

Now co-op students are a core element of Nead Werx’s business strategy. “If the Georgia Tech co-op program did not exist, we would have holes in our team that we could not fill, and if we could fill them, we couldn’t do so profitably,” Downey says. “So it’s just a win-win-win for everybody involved.”

One of Downey’s winners is Stephen Dolan, a junior computer science major who wrapped up his first co-op semester at Nead Werx this past summer. Dolan looked to the program to get that all-important real-world experience and also to get a feel for his options in a field that’s wide open.

“Nead Werx assured me that they have multiple areas, so I could swap out of databases if I wanted to and work with the mobile team or the front end,” Dolan says. “It had room to change around.” 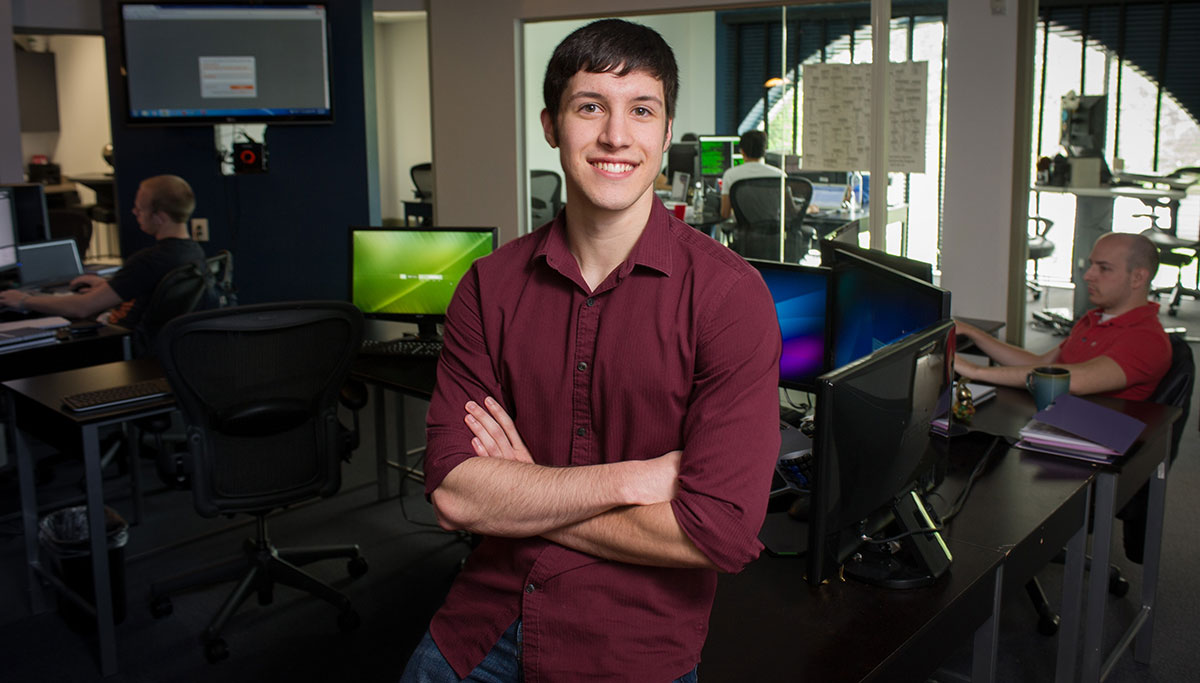 “I like to get to know a company rather than just a position, so I definitely wanted to work somewhere three semesters instead of do an internship.” - Stephen Dolan

So far, he likes working in databases. “I’m seeing how useful it is in the real world,” he says. “I was originally going to go into cybersecurity, that kind of thing, but I think I fit really well in databases, so it has changed that.”

Helping students determine that they are on the right academic path is one of the key advantages of cooperative education, Thompson says. “In most cases, it validates a student’s choice of major,” he says. “But in some cases it also tells them this is not the major. That is also valuable, because now the student isn’t getting a degree and then taking the first job and realizing it’s not what they wanted to do.”

In getting a taste of the careers for which their Georgia Tech degrees are preparing them, Dolan and Mehl have found value not only in learning about the work, but what it’s like to work.

“Through all my classes, they tell you, you need to be in this group setting because this is how it’s going to be,” Mehl says. “And although it sort of prepares you for it, once you’re actually in the work place, you learn how to interact with people of all ages, all levels … just really street smart things you can only learn being inside the business.”

Dolan, too, has experienced collaboration at a new level. “In school, you don’t get the experience of having 25 people working together to make one cohesive product. I’ve worked on the four-person groups, where you have to coordinate between a few people, but the teamwork is incredible in a place like this,” he says. “I think it’s going to help me out with a lot of the project classes I’m taking in school.” 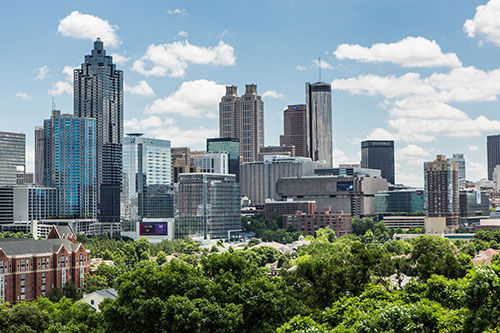 Georgia Tech works with co-op and internship employers all over the nation and the world, so students who want to work abroad, move a little closer to home, or broaden their horizons in a new city or state have options to choose from.

But for students who want to participate in these programs without putting campus life on hold, Georgia Tech’s location in Atlanta ups their odds of doing so. In fact, well over half of Tech’s “co-opportunities” are in the metro area.

Local co-op students can still remain in their residence hall, work out at the Campus Recreation Center, stay involved in their clubs and organizations, and more, notes Wayne Thompson, director of the co-op program. It’s such a plus, he points out, that many out-of-state employers offer housing and other incentives to make it more attractive for Tech students to leave Atlanta.

Business major and co-op student Shannon Mehl made a beeline — or would that be a Yellow Jacket line? — for the Georgia Power booth at Tech’s Career Fair, and she might have gone wherever they wanted her to, but she feels fortunate to have found a position at their headquarters just blocks from campus. “It has been amazing to be a college student and still work,” she says. “When I get off at five, I can still go meet up with my friends, or if there’s an event on campus I would like to attend, I can still do that.”