Though Georgia Tech’s first students enrolled 127 years ago, the Institute celebrated its 250th Commencement exercises in December 2015. We look back at Commencements through the years. In some ways much has changed, but variations on the earliest traditions remain.

Tech celebrated its first Commencement on June 18, 1890, with two graduates. Prior to the ceremony, the Georgia School of Technology opened the doors of its shops to the public for students to show guests what they had been working over the course of the year. This public viewing remained part of Tech’s graduation activities for many years following, and a semblance of this tradition lives on in Tech’s Capstone Design Expo and other year-end presentations that take place throughout campus today.

All images courtesy of the Georgia Tech Library Archives

The first diploma awarded at Tech's first Commencement in 1890

Graduates process into the ceremony on Grant Field

A graduate earns his degree

A graduate earns his hood

A graduate and his family in the 1950s

Commencement at the Fox Theatre

A graduate receives his degree from President Joseph M. Pettit in 1984

Even in its earliest ceremonies, speakers focused on the Institute’s prestige and rigor, and encouraged graduates to make the most of their careers. A few snippets of early Commencement commentary: 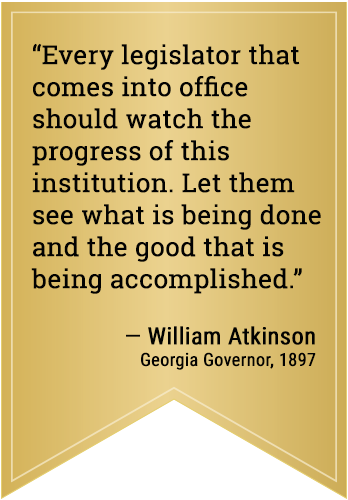 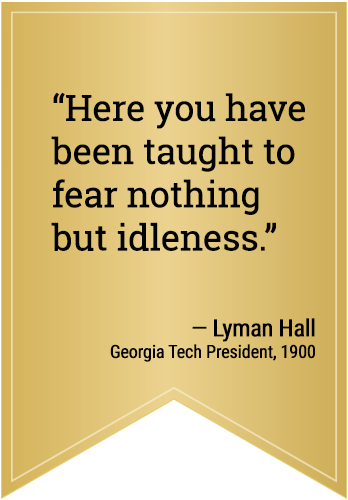 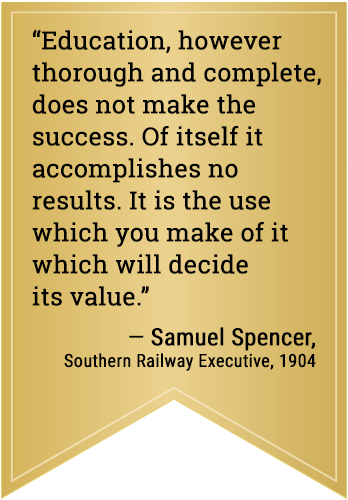 Tech celebrates its first Commencement with two graduates. Prior to the ceremony, Tech opened its shops to the public for others to see the students’ work over the course of the year.

A debate between the Phi Eta Sigma and Euphronia Literary Societies is introduced into the graduation ceremony.

Commencement festivities include a parade and public carnival on Grant Field.

Ceremony is held at the Fox Theatre, which happened periodically in future years.

Honor Day, Commencement Exercises, and Military Day are combined into one “streamlined” program. Of the 460 graduates, 374 go straight into the armed forces.

At the 55th Commencement, 188 wartime graduates received degrees, including 60 Navy and 50 Army ROTC students. Three ceremonies were held that year, with the third term being accelerated because of World War II.

Ceremony moves back to the Fox Theatre, partly chosen for the air-conditioned environment. The Technique writes an editorial asking students to support Commencement Week activities that the students and administration have organized.

Of the 965 graduates who get degrees that June, 85 percent were veterans of WWII.

Tech moves to four graduations a year (one per quarter) and hosts its 89th Commencement in December.

The December ceremony is canceled because of bad weather.

Gloria Shatto is the first woman to give a Commencement address.

Commencement ceremonies are split into two ceremonies: one for undergraduates students and one for graduate students.

The graduating classes had grown to 2,162 graduates in spring and 1,250 in fall.

Tech celebrates its 250th Commencement with around 2,800 graduates in ceremonies at McCamish Pavilion.