If you’ve vacationed at a Disney park over the past two decades, you’ve probably already seen Trevor Larsen’s work.

Remember when your kids talked you into riding Space Mountain? Larsen developed parts for your car. That time you screamed your way through the Twilight Zone Tower of Terror? Larsen was one of its designers.

Now he’s senior vice president for facilities and operations services at Walt Disney World Resort, meaning he influences engineering all over the Orlando property. His past work at Disney has led him to glamorous cities, like Paris and Hong Kong, in the name of one Mickey Mouse.

But it all began, as many careers do, on North Avenue.

Trevor Larsen — engineer, executive, Disney cast member — is a two-time College of Engineering alumnus. He earned both a bachelor’s and master’s degree in mechanical engineering from Georgia Tech, the only university he ever applied to.

“I was convinced that Georgia Tech was the very best engineering college for me,” he says, “and that’s where I wanted to study.”

Since finishing his education, he’s spent his entire career at Disney, where he climbed from “Imagineer,” in company parlance, to the leadership role he holds now. Creations and designs from his earliest days at Disney are still in use today.

If you think Larsen is living an engineer’s dream, well, you’re exactly right. 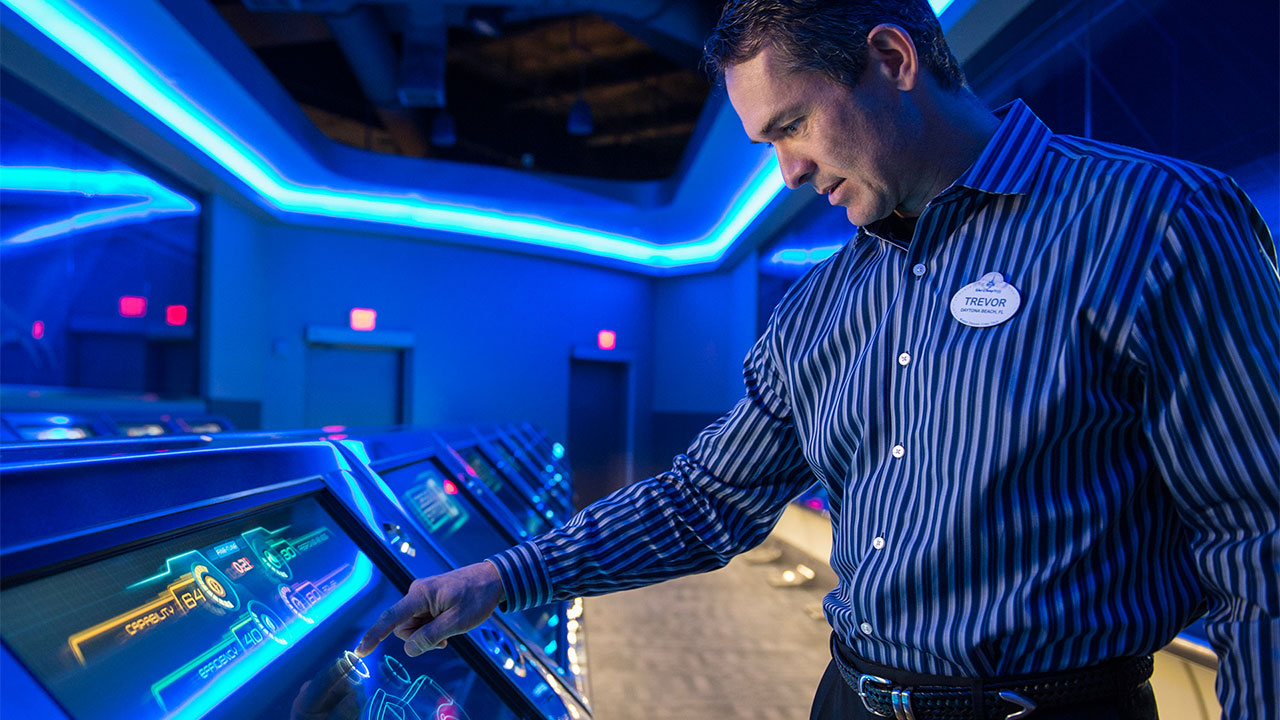 To Space Mountain and Beyond

Tucked in a quiet corner of Walt Disney World, there’s a warehouse whose bland exterior belies the treasures within. This is Central Shops, Disney World’s main manufacturing and maintenance site. Explore its departments and you’ll find everything from ride vehicle construction to figure painting and sculpting. It’s a Disneyphile’s dream, and it’s where Larsen came up as an engineer in the early ‘90s.

In his current job, he has responsibility for this factory as well as others scattered across Disney World’s property. But in his earliest days with the company, Larsen was working here himself as a ride engineer, providing ride support for the manufacturing and maintenance teams.

“As I walk through the shops, it’s like a little trip down memory lane,” Larsen says now.

In one section of the warehouse are a few pieces from Space Mountain. There’s a carbon fiber tub, which serves as the bottom to one of the ride’s cars, as well as a tow bar that Larsen himself designed during those first days at the company. Space Mountain has seen a lot of changes since then – including a cosmetic revamp in 2009 – but that tow bar is still in use on the attraction today.

Which doesn’t mean Disney engineers rest on their laurels. Like all engineers, they seek ways to improve their work and boost efficiency. Larsen’s resume also includes work on Spaceship Earth (the attraction housed in Epcot’s famous silver sphere), where he helped design better wheels for the ride’s vehicles.

“Walt Disney used engineering and technology as a core medium to his storytelling,” Larsen says. “Even the name Imagineering embodies the essence of how engineering fits into Disney’s culture.”

The Space Mountain posting, though, was formative for Larsen’s career. He was assigned to its cycle program, an important part of any Disney attraction but especially high-intensity ones. It works like this: After a car has been through a certain number of “cycles,” its nuts and bolts are removed and replaced, and the vehicle undergoes testing to ensure it’s safe and functioning properly.

This is no small feat. Larsen points out that in a decade of use, a regular automobile door may go through 25,000 “cycles,” measured in openings and closings. A door on a Twilight Zone Tower of Terror car, meanwhile, will see more cycles than that in less than two weeks.

Stakes are high for Disney engineers, and in his earliest years, Larsen says, he was grateful to work with and learn from the more seasoned engineers around him. He was also glad for a job that melded both the theoretical and hands-on sides of engineering.

Larsen has spent his entire working life at Disney now, but his enthusiasm for Disney and engineering itself remains undimmed. He speaks of the company’s namesake, Walt Disney himself, like an old friend, and frequently mentions Disney’s philosophies to illustrate his own relationship to his work.

“Walt Disney used engineering and technology as a core medium to his storytelling,” Larsen says. “Even the name Imagineering embodies the essence of how engineering fits into Disney’s culture.”

When his elementary school classmates fantasized about becoming police officers and firefighters, Trevor Larsen was already telling teachers he hoped to be an engineer.

His roots in the field run deep: His grandfather was a tool-and-die designer, his uncle is a millwright and machinist, and his father is a mechanical engineer.

“I grew up in a household where my curiosity and creativity were encouraged,” he says.

Disney figured into his childhood, too. His first exposure to it was through a TV show, “The Wonderful World of Disney.”

“What captivated me then, and what continues as one of our core elements today, was Walt Disney’s ability to tell stories,” Larsen says. His first time in one of Disney’s parks was as a youngster celebrating his father’s graduation with a mechanical engineering degree.

“Seeing things first hand, in the field, is very important in our business and to every engineer,” Larsen says.

“Having both a bachelor’s and master’s degree in mechanical engineering from Georgia Tech,” he says, “made me extremely competitive when it came time to interview for fulltime positions.”

His path to Disney wasn’t particularly unusual or glamorous. The company attended a Georgia Tech career fair, and Larsen stopped by. He spoke with Disney’s director of engineering, which led to a subsequent interview and then a job offer – a full quarter before Larsen’s graduation.

“These types of early job offers are quite common at Georgia Tech,” he says, “because companies realize how demanding the program is.”

These days, his life looks very different from when he entered the workforce. Larsen has had a part in some of Disney’s marquee attractions: He was a designer for Test Track Presented by Chevrolet at Epcot, and he served on the opening team for Disney’s Animal Kingdom.

But some things have stayed the same. He believes in staying in touch with the “guest experience” and so he takes strolls through Disney parks and resorts to see things from a visitor’s point of view.

“Seeing things first hand, in the field, is very important in our business and to every engineer,” he says. 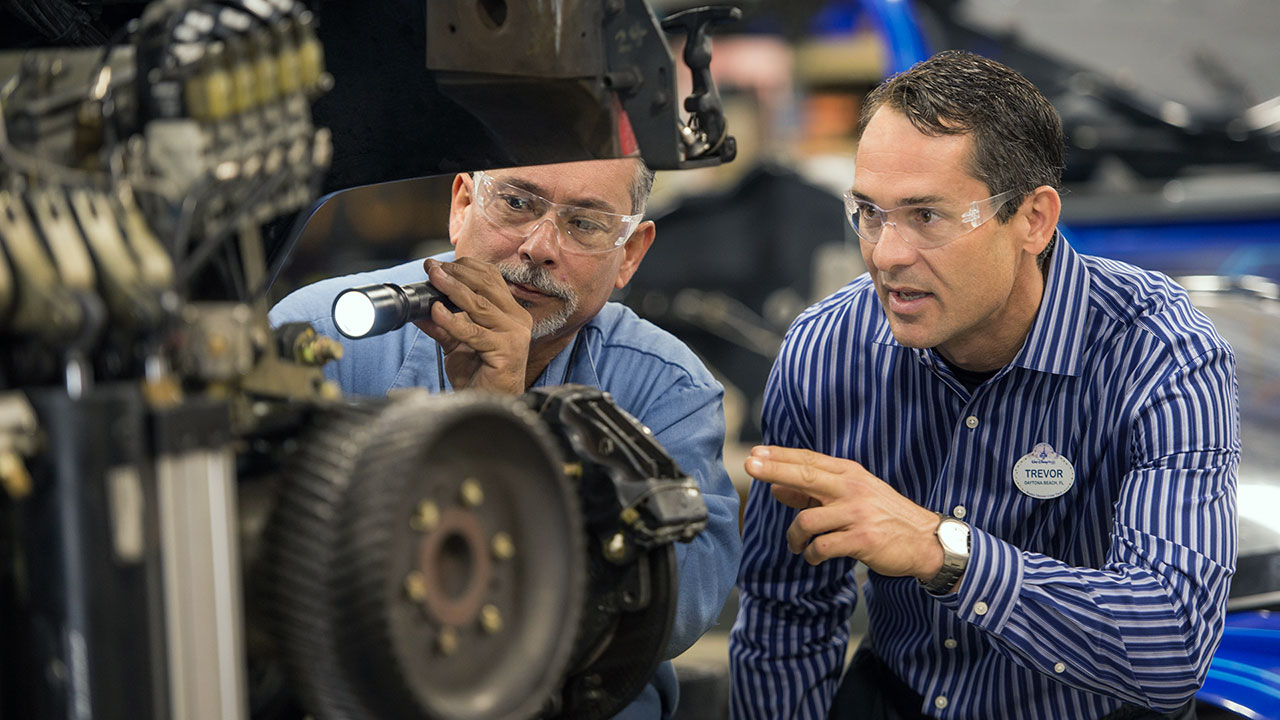 Nothing but Blue Skies

Every attraction at Disney begins with a story. The first step in developing a new ride is called the blue sky phase. At this stage, only the story is real, and it will create the foundation for everything that comes after.

Larsen stresses the value of “show” at Disney parks and the idea that an attraction is more than mechanics. It’s a well-planned, meticulously detailed piece of entertainment – a show infused with magic.

At Central Shops, Larsen’s old stomping grounds, the commitment to show is visible in every department. Scattered across the warehouse are bits and pieces of a new roller coaster. Bound for the Magic Kingdom, these pieces will eventually become part of Seven Dwarfs Mine Train (which opened in May).

What Larsen talks up aren’t the workings of the ride itself, but character details and artistic touches. For example, the ride’s vehicles – its “mine trains” – were crafted to appear authentically wooden.

“Everything we design, build, operate, and maintain,” Larsen says, “is done with a focus on excellence.”

In another part of the warehouse, an artist is hand-painting the bottom half of a small, stout figure that will be one of the ride’s namesake dwarfs. Larsen asks the artist which character he’s working on.

Disney, Larsen says, is “a company you can really have a career with.” Through the twists and turns of his own career there, he’s found guidance in Disney principles.

At Test Track, the Epcot attraction Larsen helped design, riders are rocketed through a course at up to 65 miles an hour. It’s one of the most popular rides at Epcot, and Larsen is proud of the rigorous safety checks it undergoes.

As Disney’s former vice president for worldwide safety, he’s an expert on them. The Test Track garage, its dedicated maintenance facility at Epcot, is open 24 hours a day. Larsen references the philosophies of Walt Disney again when he talks about it, explaining that while show was one of Disney’s core values, his No. 1 priority was always safety.

“Everything we design, build, operate, and maintain,” Larsen says, “is done with a focus on excellence.”

This is one of the fundamental challenges of Disney: how to fuse the creative vision its reputation is built on with the needs of millions of visitors and a constant vigilance for safety.

It’s a challenge best suited, of course, for an engineer.