This story was originally published in Georgia Tech Alumni Magazine, Vol. 90, No. 1 2014

The venomous sidewinder rattlesnake has always been able to kill you—but now it could help save you, too. It’s just one of the unlikely species inspiring Georgia Tech researchers to improve lives, animal and human alike.

Despite the many famous animals that populate the annals of Georgia Tech lore—Sideways, Stumpy’s bear, the St. Bernards of Lambda Chi—for many years, the Institute rarely engaged with animals in an academic capacity. Even as recently as the late 1990s, every single research animal on Tech’s campus was contained in a single tank inside a lab in the School of Civil and Environmental Engineering. The sum total: six goldfish.

In the ensuing years, Georgia Tech researchers have expanded their focus to more fully explore the intersection of engineering and the natural world. And as they have, one theme has emerged again and again: For as much as we still have to learn about animals, they may have even more to teach us about ourselves.

These days, animals are helping researchers to better understand not only animals themselves but also the wider world, including humankind’s place within it—our physiology, our brains, our interactions with our environments. Animals are inspiring Georgia Tech’s faculty and students to create advanced robots, medical technology and improved prosthetics, among other developments that will shape the future, both saving and improving human lives.

Often, these animals aren’t the types that you would expect to be saving people. Take the sidewinder rattlesnake.

Animals are inspiring Georgia Tech’s faculty and students to create advanced robots, medical technology and improved prosthetics, among other developments that will shape the future, both saving and improving human lives.

It’s best known for lying in wait in sandy stretches of the Southwest, ready to strike any prey that comes within reach and inject it with venom.

But the sidewinder’s unique motion that carves an arcing trail through the desert is proving key to researchers who seek to build a robot capable of moving across sand.

That is but one of a growing number of animal-related projects taking place on campus. As these endeavors have increased, Georgia Tech has taken steps to manage and oversee such work.

All research involving animals is conducted under strict guidelines ensuring that as few animals as possible are used in research, and that those animals are treated humanely. Animals have given much to researchers, and so researchers do their part to give something back.

Here, we look at just a small sampling of the ways in which animals are helping Georgia Tech researchers transform the world.

Biologically inspired robotics has developed into a major focus at the Institute, with multiple labs looking to the animal kingdom for inspiration. One challenge that has long vexed researchers is the ability to traverse across sand. It’s a tricky prospect, as sandy surfaces can take on the properties of a solid, a liquid and even a gas.

But while robots struggle with the surface, various animals are able to move across sand, including lizards, sea turtles and snakes. Now Tech roboticists are mining the creatures’ behavior for their evolutionarily perfected secrets.

Animals are inspiring Tech’s faculty and students to create advanced robots, medical technology and improved prosthetics, among other developments that will shape the future, both saving and improving human lives.

Then they turned to snakes.

One snake-based robot that came out of the lab—known as Scalybot—was effective on many surfaces, but it always got stuck in sand. Many real snakes struggle with sand, too.

They partnered with Joe Mendelson, curator of herpetology at Zoo Atlanta and an adjunct professor at Tech, to study a snake that’s at ease on sand: the sidewinder rattlesnake.

Georgia Tech prohibits venomous snakes on campus, and Tech researchers themselves can’t handle poisonous animals. Mendelson’s position at Zoo Atlanta allowed him to collect sidewinders from Arizona and conduct the research at the zoo in “the world’s most expensive sandbox.” Tech’s researchers simply observed the results.

The team now has a firm understanding of how sidewinders handle sandy slopes, and they’re examining how the snakes navigate obstructions. While sidewinder-style robots have obvious uses—search-and-rescue missions, military operations, planetary exploration—research partners from Harvard University have suggested sending the robots into sand-filled tunnels in Egyptian ruins.

“A robot can’t go down a sand-choked tunnel underground—only a snake can do that,” Mendelson says. “So we need a sidewinding robot with a camera that can look around. Then [if something of value is down there] you can put in the effort to dig it out.”

The needs of robots extend far beyond traversing sand, and inspiration has come from some surprising places. Hu received a lot of attention in 2012 for publishing a study of the “wet-dog shake”—when dogs shake wildly to dry themselves.

The physics of the wet-dog shake are impressive—dogs can shake themselves 70 percent dry in just a fraction of a second. While the research might seem silly, it does have useful implications. Hu says the research could be used for improved drying technology or in robotics.

“In the future, self-cleaning and self-drying may arise as an important capability for cameras and other equipment subject to wet or dusty conditions,” he says.

The School of Applied Physiology is home to the Comparative Neuromechanics Lab, where humans, rats and other creatures run on instrumented treadmills. Meanwhile, researchers gather data on how animals move.

This comparative data reveals a wealth of information on how healthy animals move, and how their bodies compensate after an injury. The findings are critical to the development of new approaches to rehabilitation of human and animal patients.

This research could be a potential alternative to bone-grafting operations.

The lab’s data also is being used in Tech’s Center for Prosthetic and Orthotic Research and Education to design and test new prosthetics, which are changing the lives of humans with missing limbs.

In the biotech quad on campus, the Parker H. Petit Institute for Bioengineering and Biosciences is focused largely on studying disease and injury and developing innovative treatments. One recent study showed that delivering stem cells on a polymer scaffold to treat large areas of missing bone led to improved results compared to using a scaffold alone. This research—conducted on rats—could be a potential alternative to bone-grafting operations.

“Massive bone injuries are among the most challenging problems that orthopedic surgeons face, and they are commonly seen as a result of accidents as well as in soldiers returning from war,” says the study’s lead author, Robert Guldberg, a professor of mechanical engineering and the Institute’s executive director. “This study shows that there is promise in treating these injuries by delivering stem cells to the injury site. These are injuries that would not heal without significant medical intervention.” 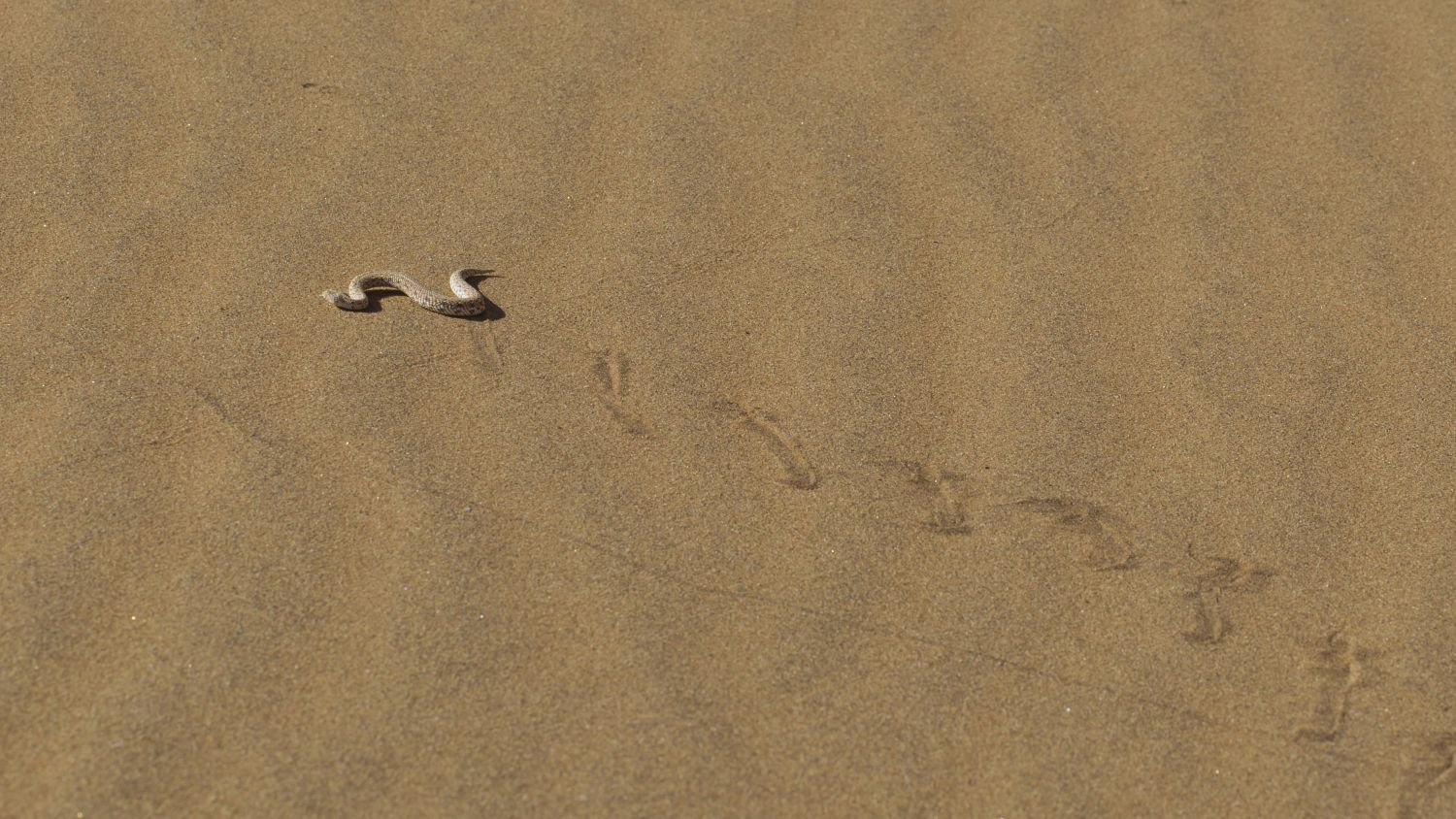 The sidewinder’s unique motion that carves an arcing trail through the desert is proving key to researchers who seek to build a robot capable of moving across sand. 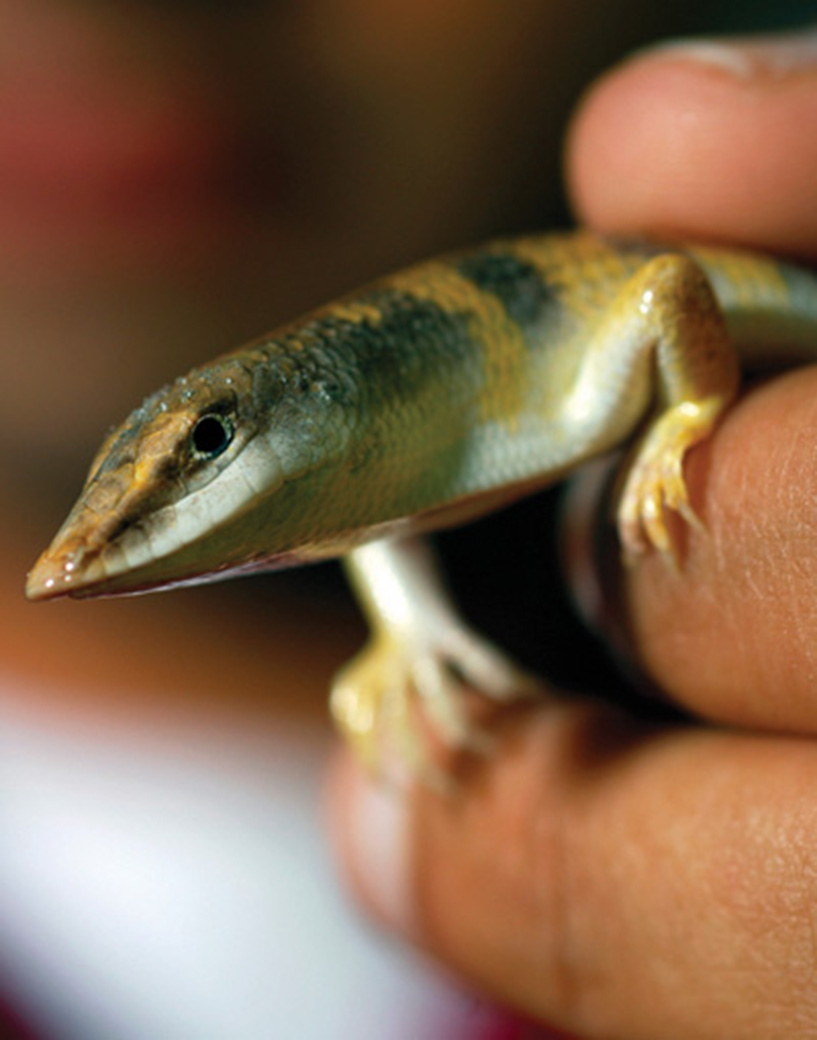 Scalybot 2 was inspired by the movements of snakes. Future iterations could be used in search-and-rescue missions.

Going Inside the Ant Raft
Georgia Tech researchers take a fascinating look at how fire ants work together to build waterproof rafts.

Some researchers on campus have dedicated their time to developing models of animals. One team including researchers from applied physiology and biomedical engineering has developed a 3-D computer model that can be studied at almost the same level of detail as a physical specimen.

While the model can’t entirely replace live animals in experiments, it can greatly reduce the numbers that are used. The principal author of the model, Nathan Bunderson, also is in the process of making the model commercially available for educational purposes.

Another modeling effort that is providing a greater understanding of animals comes from the lab of Tech associate professor of physics Flavio Fenton.

Fenton has created extensive models of hearts after studying fish, mice and horses. His detailed electronic models are a tool to researchers and veterinarians around the world.

One project is focused on fostering a more symbiotic relationship between pets and humans.

Jackson, an associate professor of computer science and director of Tech’s Center for Biointerface Research, created a vest for canines that is equipped with several sensors.

A dog can trigger a sensor by nipping or nudging it, movements that send audible cues to the dog’s owner. The technology could be of use for service or rescue dogs.

“Currently, dogs can only communicate with people by barking or through body language. Sometimes that isn’t good enough,” Jackson says. “The sensors can give them a voice they’ve never had.” 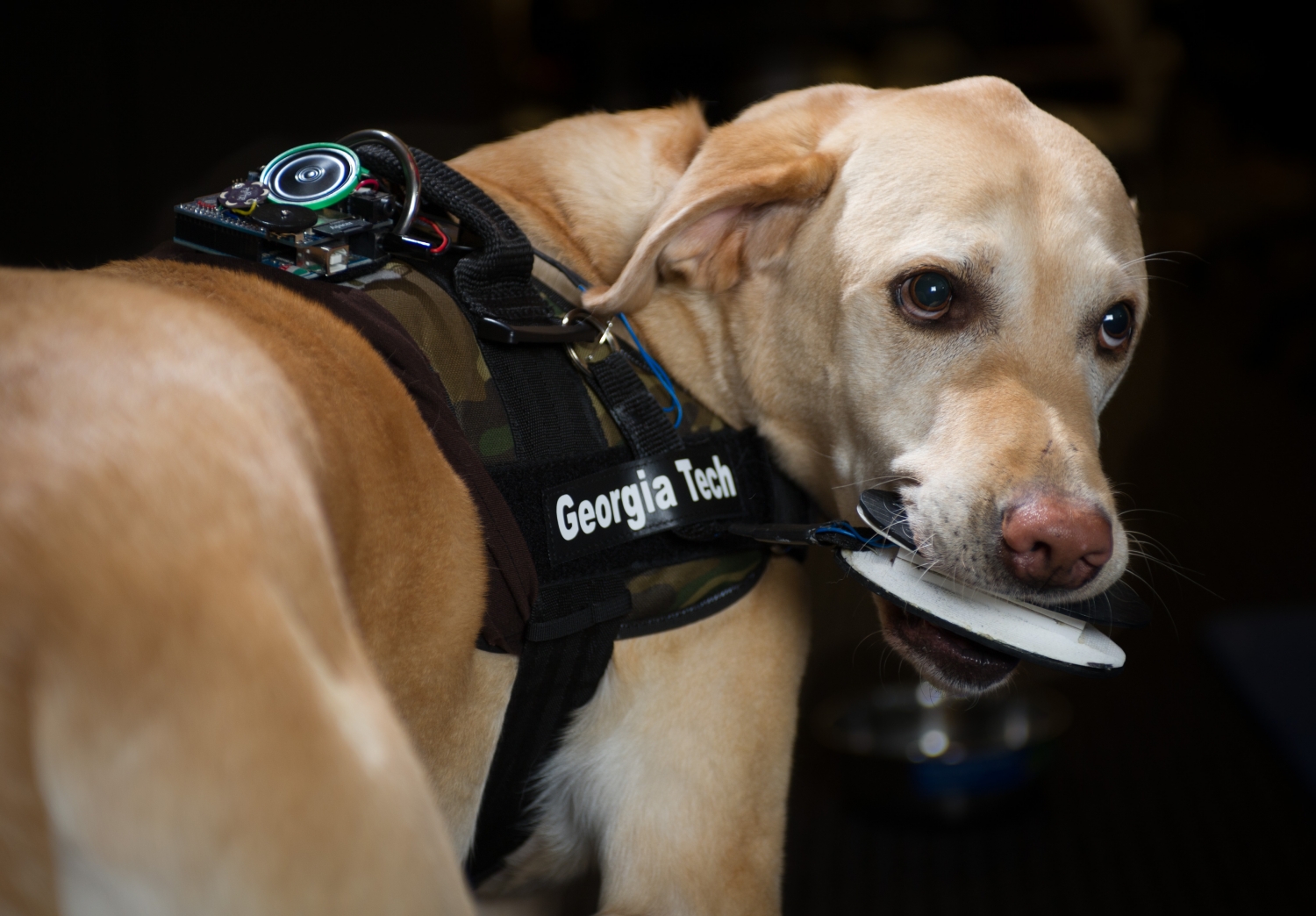 The FIDO vest for canines is equipped with several sensors. A dog can trigger a sensor by nipping or nudging it, movements that send audible cues to the dog’s owner. 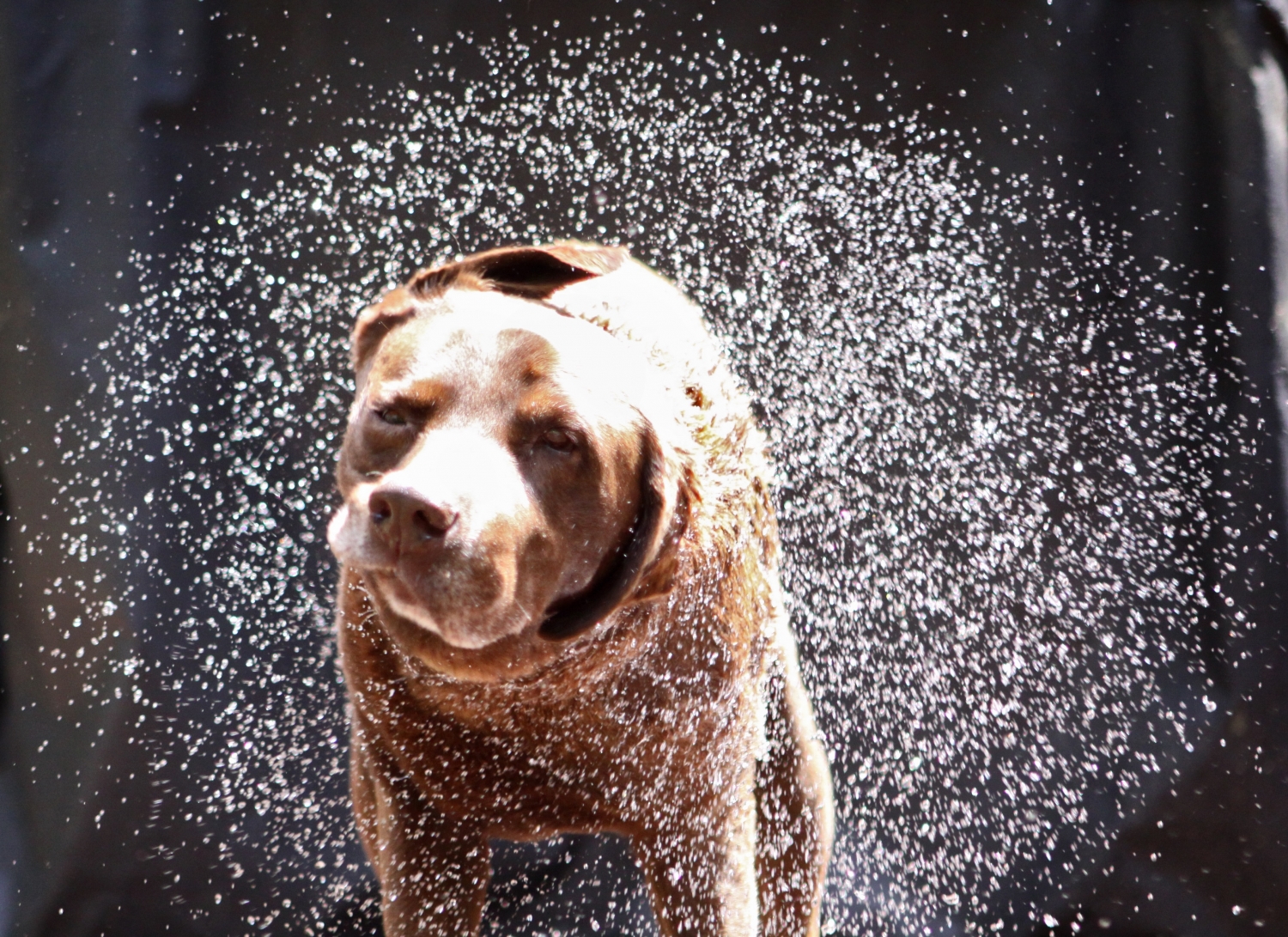 The 3-D computer model can greatly reduce the number of live animals that are used in experiments.

All Tech researchers whose work involves live specimens use as few animals as possible and follow strict regulations to ensure humane treatment.

These regulations are enforced by the Institutional Animal Care and Use Committee, a group that monitors all research and teaching activities at Georgia Tech involving vertebrate animals and makes certain it follows guidelines in the Federal Animal Welfare Act.

The IACUC reviews any activity involving animals before animals are used, and the committee meets monthly to review protocols.  IACUC responsibilities include frequent inspections and documentation.

“At the deepest level, I owe animals the best possible care,” says Richard Nichols, professor and chair of the School of Applied Physiology at Tech and director of the Neurophysiology Lab, whose animal research augments his study of the physiology of human locomotion. “I feel particularly qualified to make sure of the humane treatment of my  animals, and I regard it as a personal obligation.”

Learn more about the Georgia Tech Institutional Animal Care and Use Committee​ and the Institute’s policies regarding research animals.