David McDowell doesn’t like being put in a box. That’s one of the reasons why, after earning a doctoral degree in mechanical engineering from the University of Illinois at Urbana-Champaign, he headed south to begin his career at Georgia Tech.

“One thing that I didn’t want was to go to a place where they had a slot for me to fit into: ‘Professor X is retiring; we need to cover this slot. We see you as a potential for that,’” McDowell said. “I wanted to define my own path, and I thought Georgia Tech would allow me to do that.”

He said he wanted a place where he could exert his vision and leadership from an early stage.

“At the time — the late  ’70s  and early ’80s — Georgia Tech was a great educational institution, but not as highly rated in research as it is today,” he said. “It was approaching the top 20-25 territory, and I could see that people here had fire in their belly to make that happen. So, coming here was a pretty easy decision.”

That was in 1983. Now, 36 years later, McDowell, Regents Professor and Carter N. Paden Jr. Distinguished Chair in Metals Processing, will receive Georgia Tech’s highest award given to a faculty member: the Class of 1934 Distinguished Professor Award.

The award recognizes outstanding achievement in teaching, research, and service. Instituted in 1984 by the Class of 1934 in observance of its 50th reunion, the award is presented to a professor who has made significant long-term contributions that have brought widespread recognition to the professor, to his or her school, and to the Institute.

“For me, this award is really a recognition of my being here,” McDowell said. “It shows that there’s a trace of my contributions.”

He will leave much more than a trace.

Over the course of three and a half decades, McDowell has done groundbreaking research in developing new techniques and methods for measuring, understanding, and modeling the way materials behave and how to use this information to improve the performance of products that benefit everyday life in areas such as transportation and energy production. He has produced more than 500 published papers or book chapters as author or co-author (including more than 335 refereed journal articles), and more than 600 presentations. For 20 years he served as director of the Mechanical Properties Research Laboratory, a major university laboratory in experimental fatigue and fracture research. And, he is the founding executive director of the Institute for Materials, serving as a driver of the development and growth of materials research and education at Tech.

But he is proudest of advising or co-advising more than 30 master’s students and 51 doctoral students through degree completion.

“What has kept me in the academic realm is my love for the development of students, and in particular graduate students, developing them as people and helping them realize their goals and dreams,” McDowell said. “I’m not a ‘grass is greener’ person. Whenever you change universities, you alter the momentum of your own program. So, I made the decision at multiple points that I can get more accomplished in my career staying the course and being consistent with a position at Georgia Tech.” 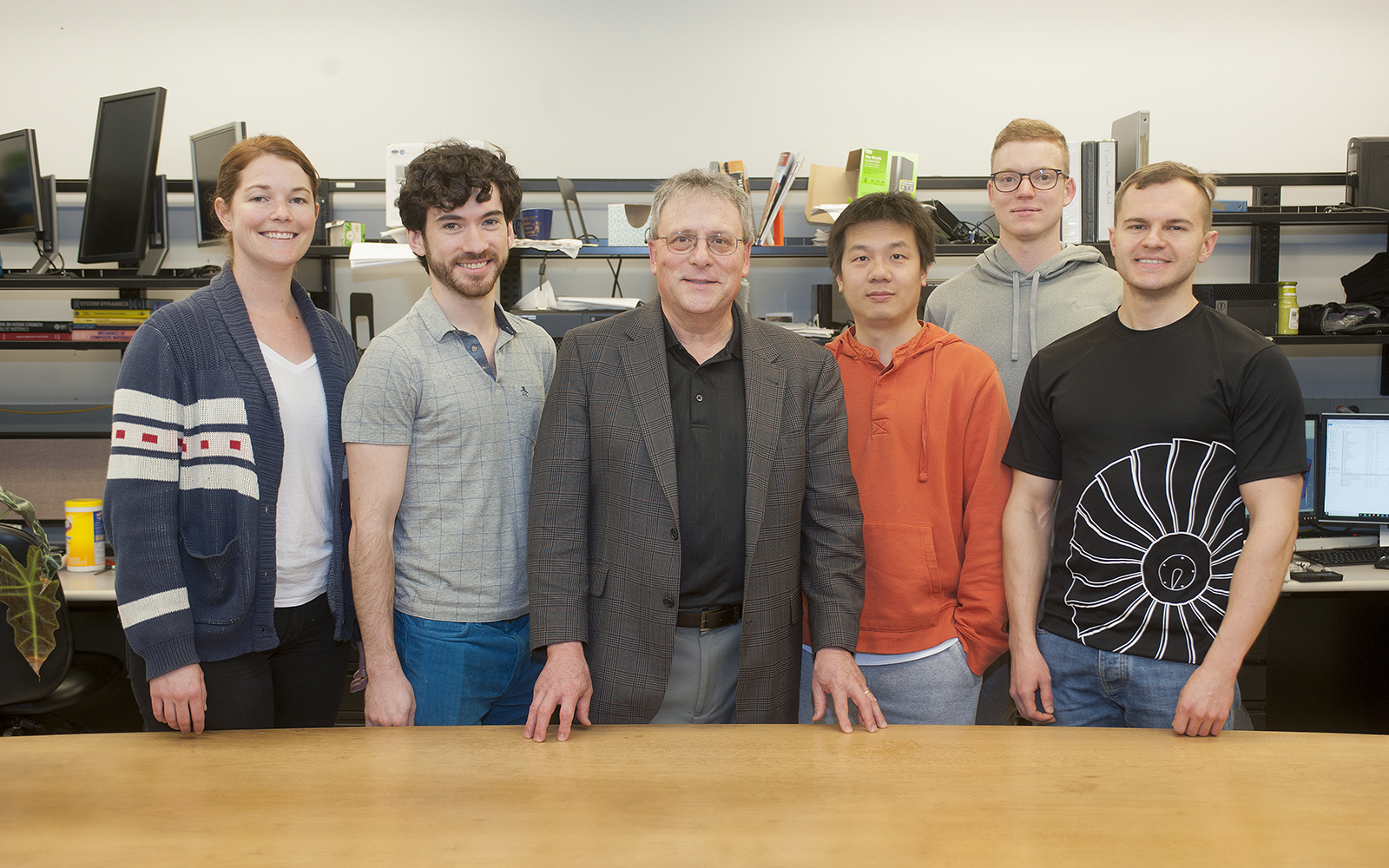 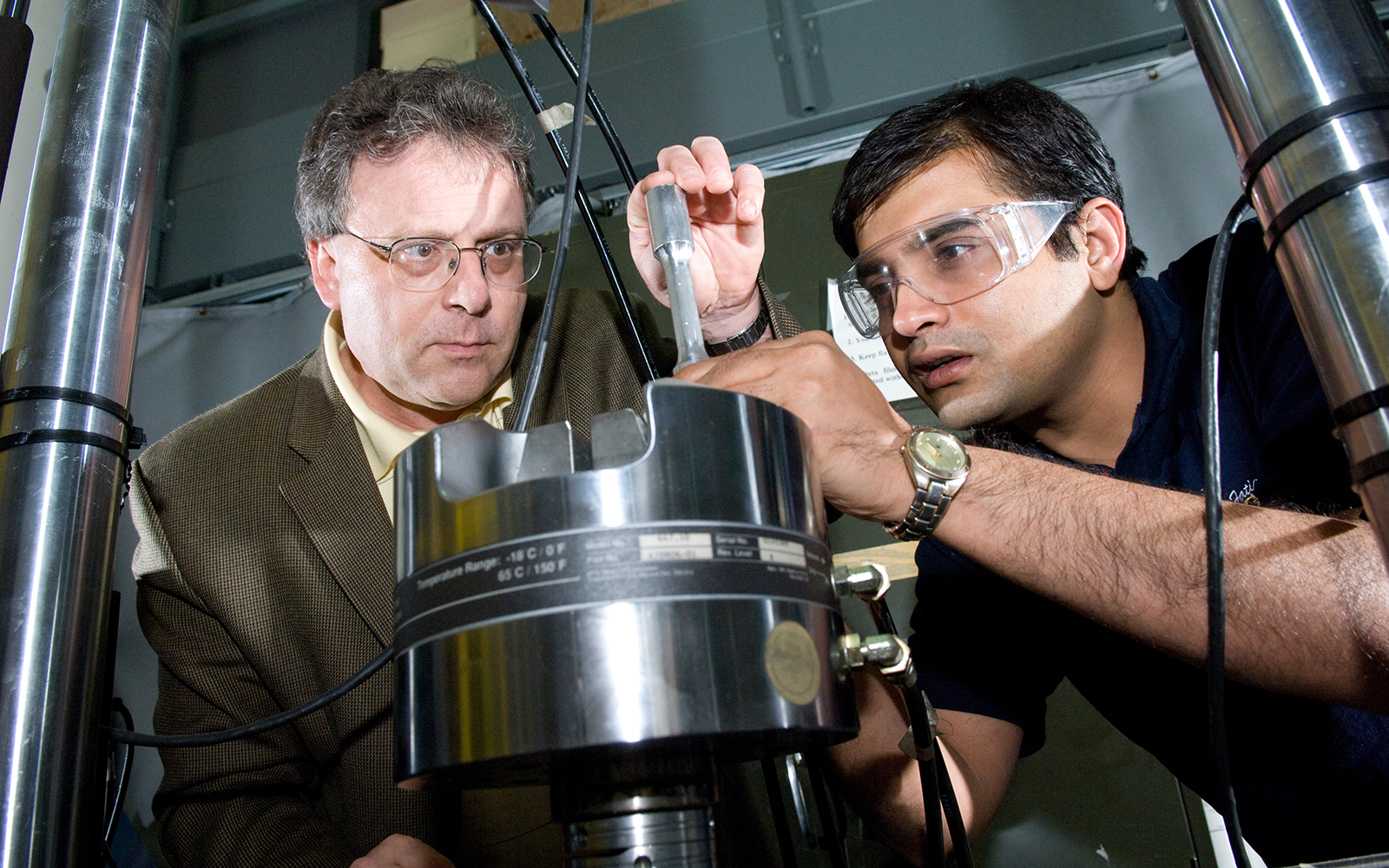 McDowell said the academic environment is unique because as a professor he can stay young intellectually by interacting with people who are in the throes of defining their area of greatness.

“That’s an inspiration to be around people who have their future ahead of them, and they’re trying to chart that path. I’m helping them to do that by helping them refine the precision and creativity of their thinking. To me that’s remarkable. That’s what a professor does," he said.

When further describing his role as a professor, McDowell makes a point of putting his words in a particular order.

“Professors have two major responsibilities. One is to develop and cultivate new ideas. The second is to cultivate and develop people, specifically students that you help guide in the early stages of their career,” he said.

He estimates that 33 percent of his former doctoral students are working in industry, 40 percent are in academia, and the rest have careers in government research labs.

“I have a knack for guiding people who have an inclination for academia,” he said. But, he doesn’t steer students in that direction. Instead, he lets them explore and find areas where they may become world-class.

“Everyone has world-class potential in something. Most people don’t acknowledge that or often don’t recognize it,” he said. “It doesn’t have to be scientific or technical endeavors. It could be empathy, leadership, athletics, oration, or giving a voice to others. In a world of nearly 8 billion people, you’d think that the probability of sheer numbers dictates that it’s not possible for everybody to have the potential to be world-class. But, it’s kind of a mystery to me that they do.” 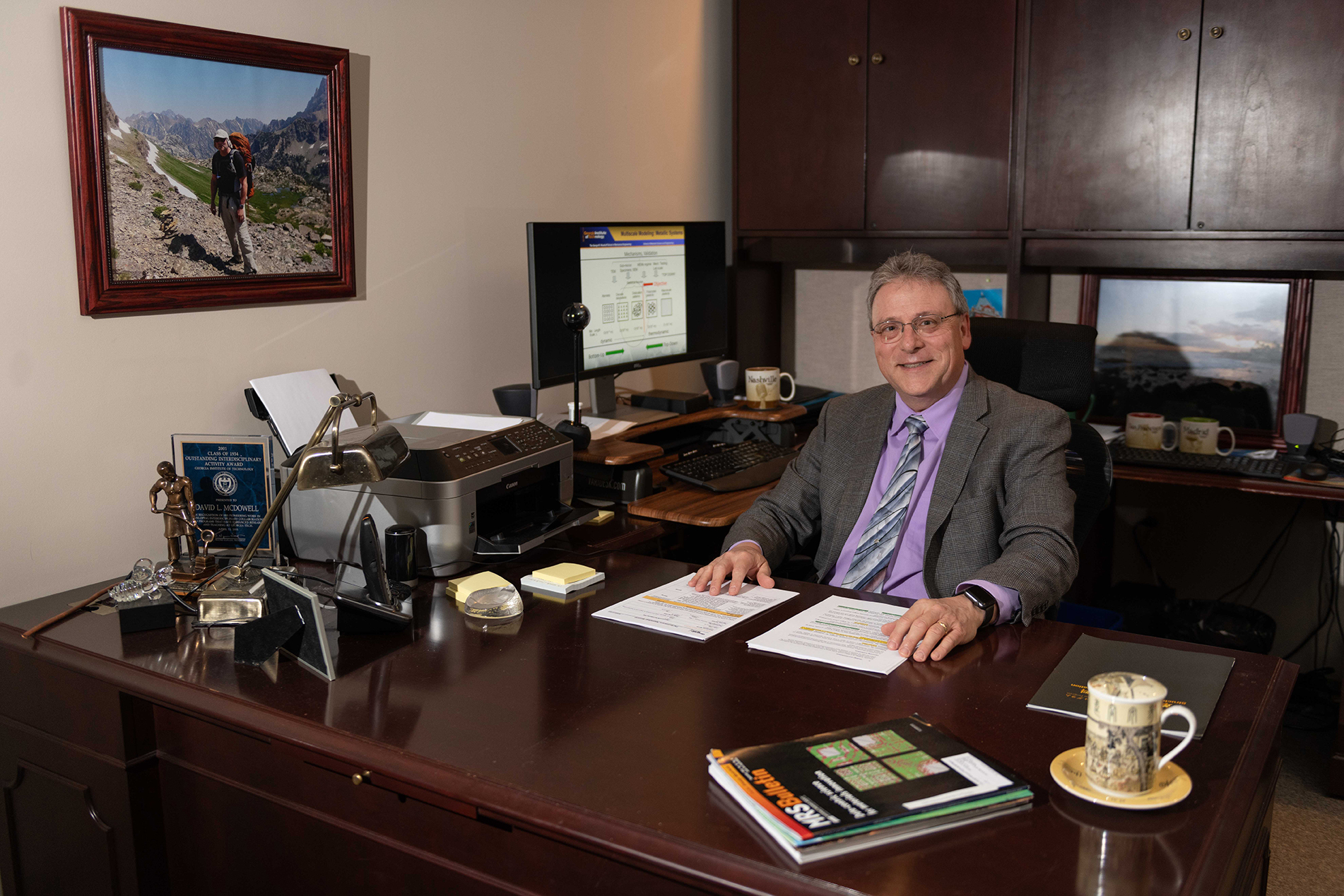 McDowell in his office at the Renewable Bioproducts Institute.

McDowell observed that one advantage of being at Georgia Tech is its culture of going outside the boundaries of departments and schools and “getting the job done.”

“One thing about Tech that’s interesting to me is the interdisciplinary thinking going back to day one since I’ve been here,” he said. “In 1984 I was asked to become associate director of the Mechanical Properties Research Lab, a crosscutting materials research lab. I got to see the importance of fostering collaboration between academic units and colleges and breaking down barriers.”

McDowell pointed out that today it’s relatively easy to have students being shared among departments, and faculty collaborating among departments. In a way, Tech is leading the way in how research and education are conducted across academic disciplines.

“One area that I have always tried to foster with my students and in my own research agenda is thought leadership, new ideas, new directions — but always paying attention to detail and understanding what has gone before you are really key,” he said. “You have to teach the value of understanding the literature and the existing arguments before you move into new things. Georgia Tech does a good job of reinforcing that.”

The challenge is to create an environment where young people with good ideas can find support for their vision and their leadership.

“This is the next generation of leaders at Georgia Tech, and they will be steering us into the future,” he said. “Let’s empower them. I want the same kind of empowerment for them that I had.” 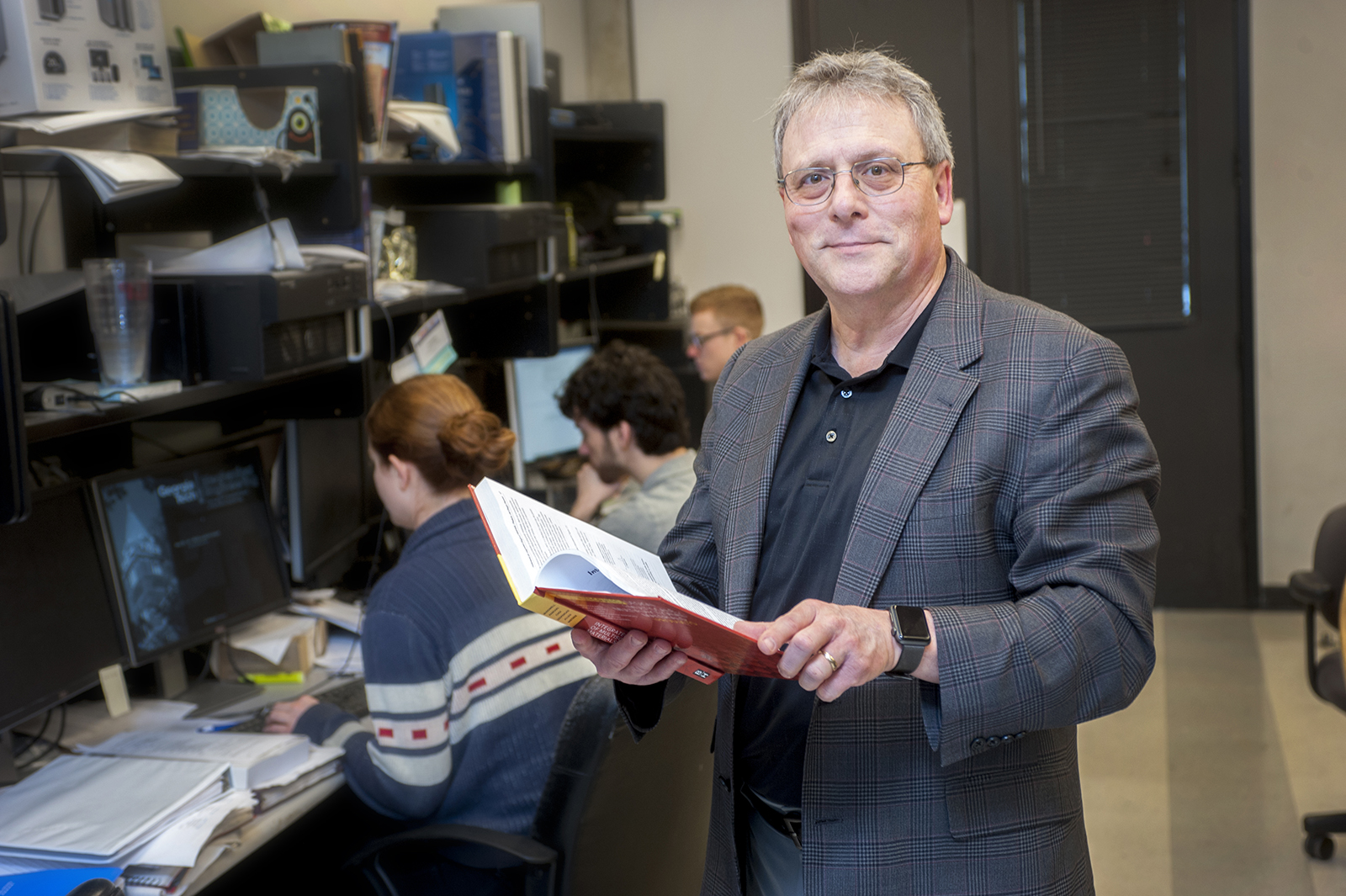 McDowell in 2018 during a National Robotics Week tour of his lab.

McDowell will be honored at the annual Faculty and Staff Honors Luncheon on Friday, April 19.

“David McDowell is my former Ph.D. advisor, which makes me very familiar with his accomplishments. He considers the mentoring of graduate students as both a key educational responsibility and perhaps the single endeavor with greatest impact at a research university. He was instrumental in my career in teaching the value of collaboration, pushing the boundaries of research innovation, articulating my vision in both written and oral communication, establishing myself as a leader in my research field, and mentoring others.”

“As a young faculty member I am truly honored to be an alumnus of Georgia Tech and have had the experience to work with Dr. McDowell. During my travels, I cannot count the number of well-known professors and scientists from the top-ranked institutions in Europe, Asia, and North America that remark on Dr. McDowell’s contributions and unique visionary efforts. Moving beyond his personal professional achievements, I can attest that his expertise, and long-term contribution to Georgia Tech and society, is most clearly evident in his mentorship of others.”

“Fourteen years [after he was my Ph.D. advisor], I regularly receive special invitations to speak at important conferences and symposia or to edit special issues of journals because Dr. McDowell nominated me and advocated for me. These opportunities are never busy work that no one else wants to do; they are opportunities to network with other researchers, form collaborations, and increase my academic sphere of influence. I believe he does these things because he gains tremendous joy and satisfaction from the successes of his students.”

“Professor McDowell was my M.S. and Ph.D. thesis advisor. I came to Tech expecting to study fluid mechanics but left Dave’s office after meeting with him the first day with an armload of papers on mechanics of materials and the knowledge that something important had just happened to me; I had just gone through one of life’s important crossroads. Professor McDowell’s enthusiasm about materials was (and continues to be) intoxicating. At our first meeting, he communicated his vision for research and my possible role working with him, and I was hooked.”

“I count my time at Georgia Tech working with Dr. McDowell as a great privilege, and I am grateful for the patient mentoring and instruction I received from him. Dr. McDowell is not just a superior educator and researcher, but a great individual who selflessly takes time to help and support all who seek it.”