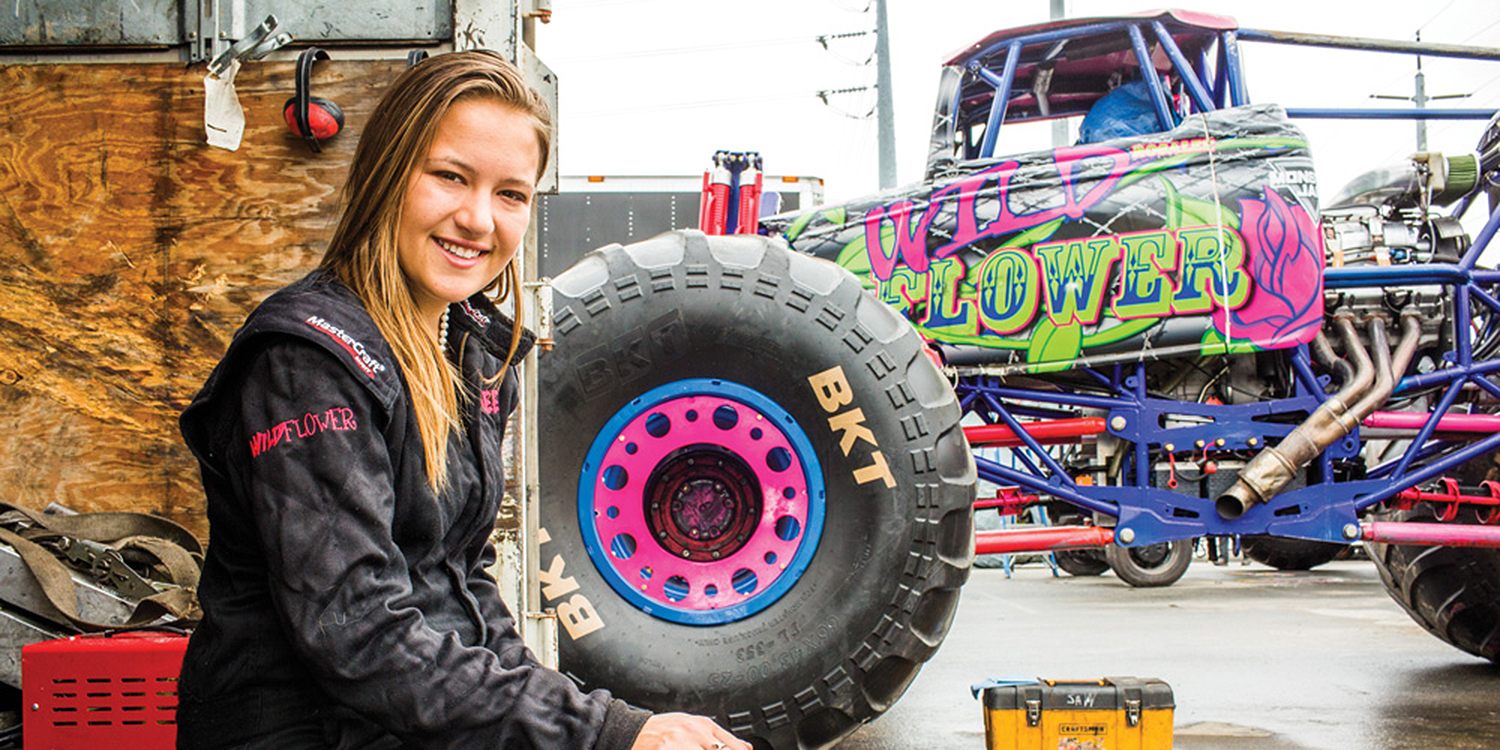 Just about to turn 19, she’s by far the youngest female driver on the tour, but she’s proven she belongs in the same arena with competitors twice her age and experience behind the wheel.

And that even includes the sport’s top dog, Dennis Anderson, driver of the legendary Grave Digger, whom she almost beat in one of her first events this January.

Indeed, she’s already got the skill and mental toughness to go head-to-head with the best drivers in the monster truck world. Catching big air on jumps, turning donuts and crushing cars is second nature to Ramer.

So you couldn’t expect this young woman, who exudes an easy confidence and warm smile, to be intimidated by Tech’s academic rigor.

She handles her college classes just like she handles Wildflower, her 5-ton truck: heavy on the throttle and with more than a little grit.

A mechanical engineering major, she set up her spring class schedule strategically so she could jet off every weekend to race in shows across the country.

She goes from trying to impress her professors and acing tests to competing in front of crowds often exceeding 50,000 fans. 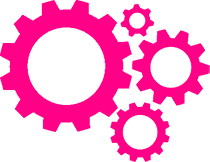 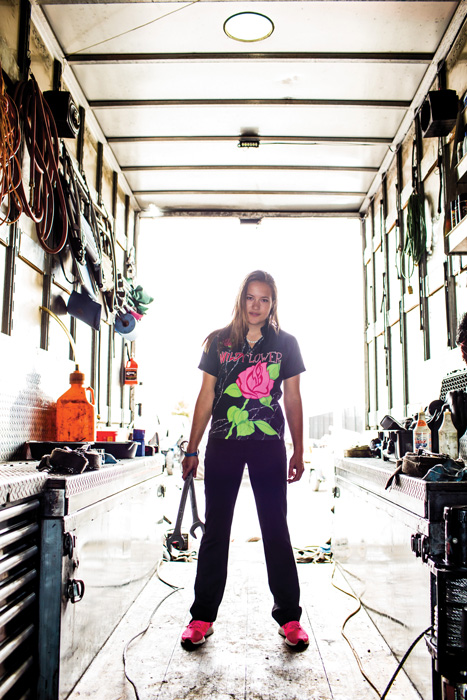 ​
Ramer has been driving monster trucks since she was 14.

Ramer joined Monster Jam right after she turned 18 and first started competing on the circuit this past winter. However, she’s been driving professionally since age 14.

Her father, Kelvin, inspired her to follow in his path as a monster truck driver by enlisting her to serve in his crew.

“My family has photos of me working on his trucks as early as the age of 3,” Ramer says. “He told me I couldn’t drive unless I learned to work on them, so that’s exactly what I did.”

At 14, she started competing in regional monster truck events against other up-and-comers, as well as seasoned veterans. No one was surprised when Ramer won Rookie of the Year on the WGAS Motorsport circuit.

“My dad was very supportive of me and even crewed for me on my races, though I think he mostly wanted to make sure I was safe,” she says.

She picked up mechanic skills quickly, and when she was old enough, her dad allowed her to start racing on junior circuits. “I raced mini off-road trucks in Trophy Kart from the ages of 10 to 13 and I did pretty well,” Ramer says, understating her domination at that level with a humility that belies her youth.

Ramer’s driving prowess drew her some viral fame. When she was 16, she got a call from daytime TV icon Ellen DeGeneres to appear on her show to talk about her pro monster truck exploits.

But the older drivers in the sport knew that Ramer wasn’t just an Internet sensation. They understood just how talented she was and that she soon was coming to compete against them.

“They saw me work my way up to their level, they saw me work on my dad’s crew and on my own truck, and they knew that my spot among them was going to be well-earned,” Ramer says.

“I wanted to live in the South and experience something different and new." 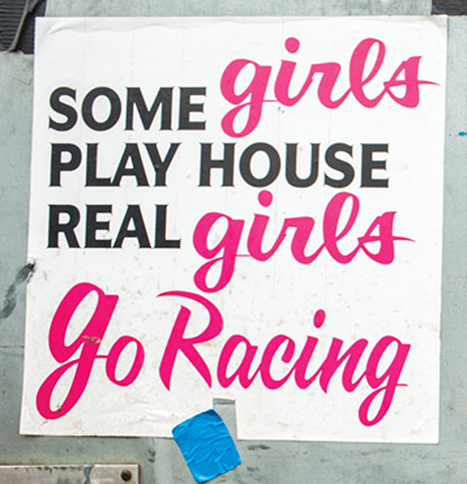 At the time, however, Ramer was still very much a teenager and also a very serious student.

She took numerous AP classes and participated on the dance team at Pacific Collegiate in Santa Cruz, Calif., a small charter high school that is perennially ranked as one of the best in the country.

She admits that when she started thinking about college, Georgia Tech wasn’t even on her radar. “All I knew is I wanted to study mechanical engineering and move toward a career working in the automotive industry, preferably in design,” she says.

After an almost-random meeting with a Tech representative visiting her school, Ramer applied and made a trip to Atlanta in the fall of 2014.

She also considered MIT and Tulane, but she says, Tech was the closest she came to feeling at home. “I wanted to live in the South and experience something different and new,” she says.

Ramer also wanted to maximize her opportunities to turn her passion for motorsports into an automotive engineering career.

“My parents didn’t go to a four-year college, they’re small-business owners of a towing company and they’ve never been big fans of the corporate world,” she says.

“But I wanted to see what it’s like to work at an engineering firm for one of the car companies. I’m hoping my Tech education will help me land an internship at Porsche or GM.”

“When I brought home my first trophy, [my dorm mates] were so excited for me.”

When she first arrived on campus, Ramer didn’t tell anyone about her background—at first that is. “I wanted to keep my school and private lives separate,” she says. 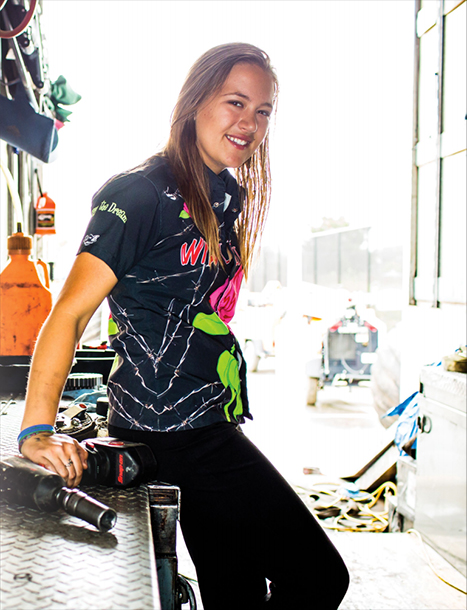 Last Spring, Ramer did a lot of her homework on planes.

“But after about a month in the dorm, I traded my Instagram handle with my new friends and then they saw how many fans I had and stumbled across that Ellen video.”

After her dorm mates were star struck, they quickly became her support system for balancing her two distinctly different lives, and even routinely sent Ramer off to the airport at the end of each week.

“When I brought home my first trophy for winning the donut competition at a Monster Jam event in San Diego, they freaked out,” she says. “They were so excited for me.”

“I do my homework and study on the plane trips out and back, as well as whenever I have down time,” she says. This spring semester, Ramer’s show schedule required her to leave campus nearly every Thursday and return that Sunday.

Her competitions usually take place on Saturday nights, but she also spends a lot of time before the show at “pit parties,” where fans can meet and greet the drivers, take pictures and get autographs.

“It’s an unusual sport where fans have total access to the drivers,” Ramer says. “I love interacting with the people at the events—both my fans and my family.” And by family she doesn’t just mean her dad. “The world of monster trucks is a small, close-knit community with only about 250 pros,” Ramer says. “I grew up with them. They’re all like my uncles and aunts, cousins, brothers and sisters.”

Driving her truck, however, still gives Ramer the biggest thrill.

Each Monster Jam show—and she says “show” because the tour is run by the same company that owns Barnum & Bailey’s Circus and Disney on Ice—consists of multiple contests. “It varies by event, track layout and promoter, but it usually involves racing head-to-head with two trucks pitted against each other over a course with straight-line drags, obstacles and lots of jumps,” she says.

There are also side competitions like the donut contest, where drivers spin their trucks in circles until they can’t go anymore and are scored for their performance.

Her first year on the Monster Jam tour was an unqualified success, though she admits there’s plenty of room for improvement.

The same thing goes for her studies at Tech. Until classes start back up again in August, she’s back in California working on both. In addition to spending time with her family, she’s competing in regional monster truck events and working with a local engineering firm to build a new chassis for Wildflower.

How are you spending your summer?

This story originally appeared in the Summer 2016 edition
of Georgia Tech Alumni Magazine.