Chris Hauser didn’t come to Georgia Tech with a plan to go on to medical school, but at some point the idea settled in the back of his mind. When he graduated in spring 2011 with a degree in industrial and systems engineering (ISyE), he decided to choose a position that would help him settle the issue.

“I was able to get a job at a health care consulting firm in Atlanta, and that pretty much helped me solidify my interest in pursuing medicine,” he recalls.

He reached out to Georgia Tech’s then pre-health advisor, who shared insights into what admission committees look for and helped him pull his application together. “I was taken aback by how helpful she was, considering I was not even a student,” he says. Now, the Marietta native is in his second year of medical school at Emory University, leaning toward primary care. 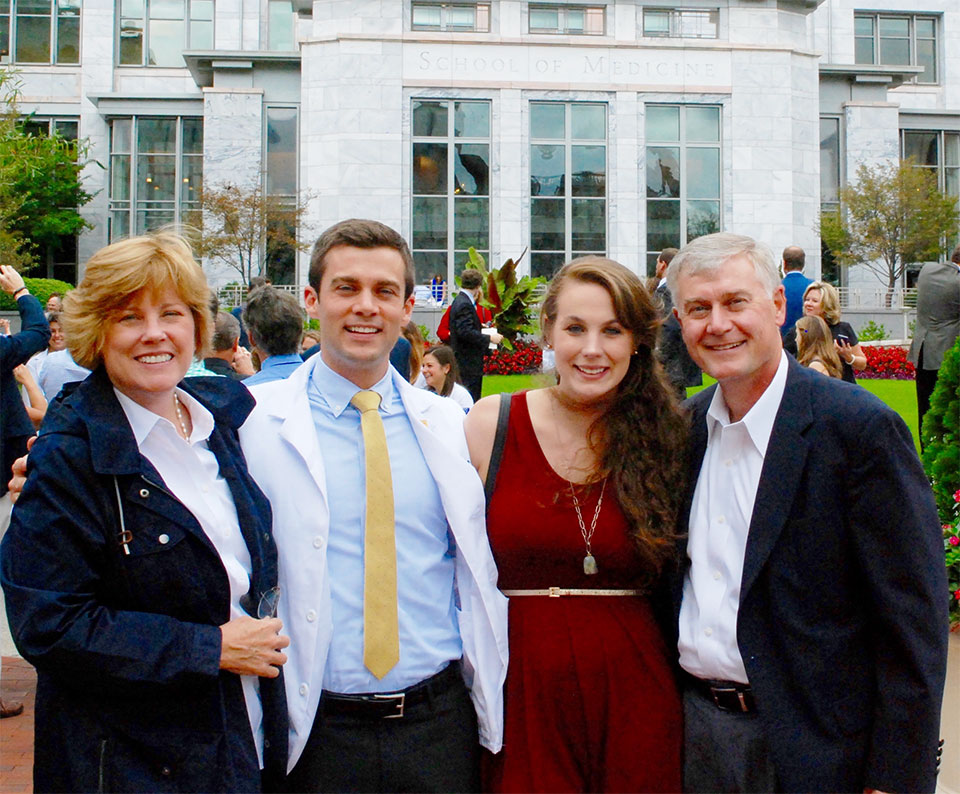 Chris Hauser's family joins him at the White Coat Ceremony at Emory University in fall 2015 as he starts his medical school journey.

Hauser’s path to medical school was certainly not traditional, but these days, the road less traveled is getting more and more traffic, notes Georgia Tech’s current pre-health advisor, Francisco Castelan.

“The landscape is still very competitive, but it has changed,” he says. “Twenty years ago, for example, everybody was a biology major. Now students could be a psych major, an engineering major — really any particular major they want.”

A degree from Georgia Tech goes a long way toward convincing admission committees that a student is up to the rigors of medical school; still, Castelan cautions, students must “fill in the gaps” to maximize their chance of success.

Although medical school aspirants can contact the Pre-Graduate and Pre-Professional Advising office at any point — even after graduation, as Hauser did — Castelan’s office reaches out to pre-med students as early as orientation in hopes of getting them off to a strong start.

He wishes he could assure these students that they will all be accepted to medical school — after all, they were smart enough to get into Tech — but there are too many variables at play, he says.

“I can’t predict what their GPA will be in four years. I don’t know how much research or clinical experience they will have, what their MCAT scores will be — what I do know is what tools and resources are available to help them strengthen their application to be competitive.”

The first step for most students is signing up for the pre-health email list, which will keep them apprised through a weekly digest of both on- and off-campus events and opportunities. T-square, Georgia Tech’s online collaboration platform, also has a pre-health site.

Throughout the year, students can take advantage of individual advising, workshops and seminars, mock interviews, peer advising, and print and electronic resources — plus every spring, there’s a Pre-health Opportunity Fair, complete with health care recruiters and professional school representatives.

While there’s a definite “checklist” for pre-med students, this should not be confused with a “mold,” Castelan says. “The message I like to give students is that it’s not about fitting a mold — having to do this or that — it’s about turning their Georgia Tech experience into a journey, keeping an open mind, and engaging in a lot of exploration and self-reflection in the process of making meaningful decisions.”

This is not just to show admission committees they’ve thoroughly vetted their career choice, Castelan says, it’s also to prevent students from making the wrong choice. “I tell them, medical school is not the time to find out you faint at the sight of blood!” 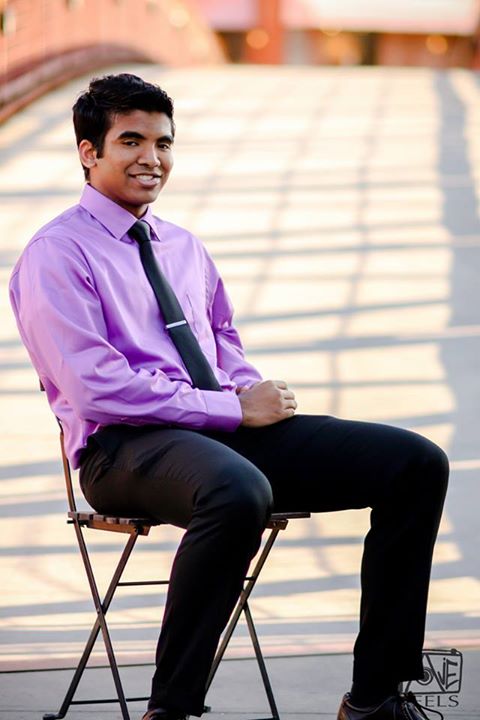 Varun Yarabarla, who served as president of Georgia Tech's American Medical Student Association chapter, also made time for club tennis and a dance team that participates in Holi Show every year.

“I put in over 400 hours there,” he says. “I did some time in oncology and neurology, and I got to meet a lot of families. Seeing what it felt like to really connect with patients and their families — that’s how I started seeing this is right for me, this is what I wanted to do.”

Clark Howell, a 2014 ISyE graduate who went into a master’s in health systems at Georgia Tech while applying to medical school, has also taken advantage of volunteer opportunities at Grady, as well as shadowing in clinics and operating rooms in North Carolina, where he’s from and where his father is a doctor.

“Even though I’m squeamish, I learned I can be in that environment,” he says. “I can see someone open up a body and look at the organs.”

Through a Georgia Tech professor, Howell also learned about an internship in telemedicine at Children’s Healthcare of Atlanta, which turned into a job. “I was able to find regular work experience doing what I already knew, but in the health care field, so I could see again that this is really what I want to do.”

Research is another way students can strengthen their applications while testing out their aptitude and tolerance for the intricacies of medicine.

Georgia Tech encourages and supports undergraduate research, and its Undergraduate Research Opportunities Program offers a 10-point plan for making the most of this culture of discovery.

His junior year, he transitioned into (former) Professor Ravi Bellamkonda’s lab in the Wallace H. Coulter Department of Biomedical Engineering. “I was really lucky to work in his lab because it’s a neurology lab,” he says. “That’s what I want to do as a doctor — neurologist or neurosurgeon.”

His year of research as a Fulbright Scholar focuses on Alzheimer’s, and that experience, he hopes, will push his application “over the top,” research-wise.

Given that no particular major is required for medical school, and Georgia Tech (like most universities) does not have a pre-med curriculum, per se, many students need extra guidance to ensure that they are getting the right courses, Castelan says.

Pre-health advising can help students eliminate the guesswork, and Georgia Tech’s School of Chemistry and Biochemistry recently launched customizable pre-health biochemistry and chemistry tracks to help students meet or exceed requirements for a range of health-related schools. Similar tracks are available through biomedical engineering and biological sciences, as well, and an undergraduate neuroscience degree and pre-health minor are currently in the pipeline for approval. 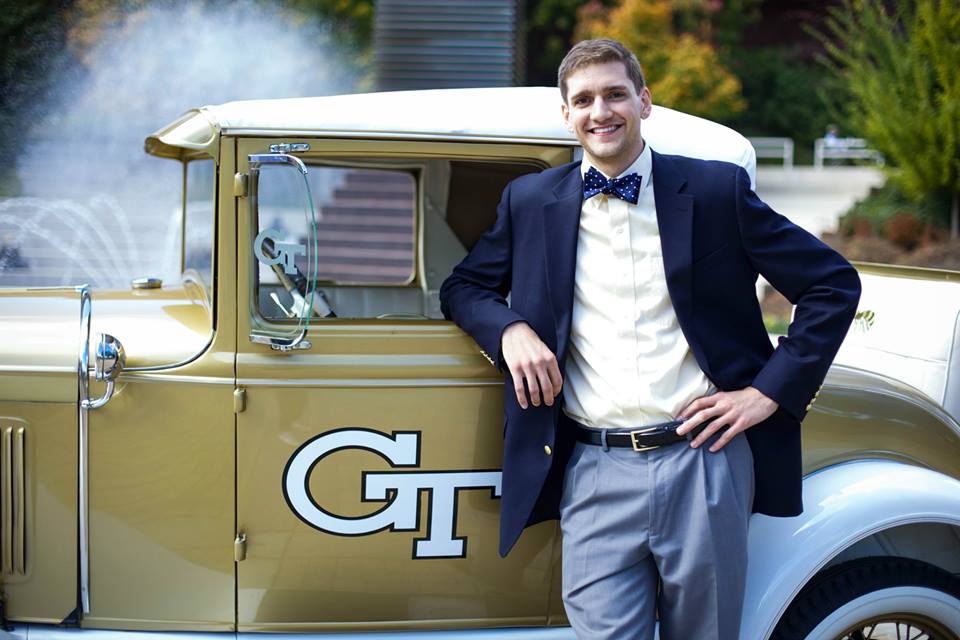 Clark Howell, shown here with Georgia Tech's Ramblin Wreck, originally wanted to work in the auto industry, but he decided to follow in his father's tracks and pursue medicine.

As an ISyE major, Howell at first tried to flesh out the required coursework on his own. “I found out, you don’t need a pre-med major, you just need classes, so I took some of the necessary classes — biology and chemistry,” he says. He failed his first biology test, so he sought out a study group and later passed the course with an A.

Although medical schools are keeping a more open mind to majors across disciplines, it’s still especially important for pre-med students to perform well in key classes like biology and chemistry, Castelan notes.

Given the importance of grades, Yarabarla says, some prospective pre-med students express trepidation about coming to a rigorous school like Georgia Tech.

When he was president of Georgia Tech’s American Medical Student Association, he tried to reassure them. “I would tell them, I have another perspective on that,” he recalls. “I don’t know how it is at other institutions, but there are so many resources for pre-health students here, plus some of my friends who are already in med school, they tell me the rigor we go through prepares us really well.”

Hauser, now at Emory, echoes that endorsement. “Georgia Tech does a great job of preparing you, for one, how to think analytically and solve problems, and two, how to work with other individuals,” he says. “You’re teaching each other a lot, and that, plus the analytical mindset, is directly applicable to med school.”

In reviewing academic histories, medical schools keep in mind that rigorous schools make it difficult for students to present with stellar grade-point averages. The MCAT, notes the Pre-Health FAQ site, is “the great equalizer.”

Pre-health advisors recommend that students take the MCAT soon after completing the core courses emphasized on the exam — typically their junior or senior year — and they also offer insights into prepping for and taking the MCAT in an application overview workshop.

Yarabarla recommends supplementing this guidance with a test preparation class — he used the Princeton Review’s MCAT Test Prep. “It’s a little expensive, but there are a couple of ways to do it,” he says. “The main value, to me, is all the practice tests they offer — it’s good to make sure you have the practice.”

Now it’s time for students to apply and show admission committees — through their transcript, resume, letters of evaluation, personal statement, and interview — that they have the passion, smarts, and stamina for medical school.

This is when uncertainty starts to creep in for many students — even if they’ve done all they can do to show they have what it takes, will the committee see it? Georgia Tech’s Pre-health Advising offers guidance throughout the application process to help students organize and strengthen their package.

Yarabarla did two mock interviews at the Fair and one with a Pre-health advisor. “It’s very beneficial,” he says. “They treat it as a real interview and at the end, tell you what you did wrong and right. And you can do it before every single med school interview you have.”

Howell, too, did a mock interview through Pre-health Advising. “I found it very helpful and reassuring,” he says.

The average medical school applicant applies to 12 to 15 schools, and the annual nationwide acceptance rate hovers around 45 percent, according to Castelan.

Historically, Castelan says, Georgia Tech students who consistently seek pre-health advising are accepted at higher-than-average rates, and overall, Tech students are highly competitive — they consistently perform well on the MCAT, they are regularly admitted to top-tier schools, and they are often admitted despite GPAs that are slightly lower than the median for those schools.

So, how did Howell and Yarabarla fare?

Howell started medical school at the University of North Carolina in August 2016, and Yarabarla — who was also awarded the Swiss Government Excellence Scholarship on top of his Fulbright — has six interviews pending.