UPDATE — MAY 25, 2017: The Juno Science Team has published its first paper about Jupiter, based on Juno’s first orbit that concluded in August of 2016. Paul Steffes describes the planet's surprises.

UPDATE — JULY 5, 2016: NASA announced that Juno successfully entered Jupiter’s orbit just before midnight on July 4. Paul Steffes was with the Juno team at the Jet Propulsion Lab in California and heard the confirmation beeps.

On the Fourth of July, Paul Steffes will stare into the Pasadena, California, evening sky. He will not look for fireworks. Instead, his gaze will focus on the heavens while his ears brace for a beep generated 520 million miles away. It will be an American achievement he’s waited on for 11 years.

Steffes, a professor in the School of Electrical and Computer Engineering, is a member of the Juno Science Team. He’ll be in California with fellow team members on Independence Day as the spacecraft reaches its destination: Jupiter. The mission will improve our understanding of the birth of the solar system and the mysteries of its largest planet.

It arrives in Jupiter’s orbit five years after it was launched by NASA and the Jet Propulsion Lab (JPL) and 11 years after Juno was created with Steffes as an original member of the team.

Peering Under the Clouds to Find a Recipe

Officially, the spacecraft is the Jupiter Near-polar Orbiter. It’s called Juno because of the tales of Greek and Roman mythology.

Juno was the wife of Jupiter, the king of the gods who visited other worlds and used clouds to hide his mischief. But Juno was able to look through them to see what Jupiter was up to. That’s what the spacecraft will do as it orbits the giant planet from as low as 3,000 miles above the clouds.

“When you see a picture of Jupiter, you’re seeing cloud tops that form the outer reaches of the atmosphere,” said Steffes. “It’s like seeing a veneer. You’re not seeing deep down.” 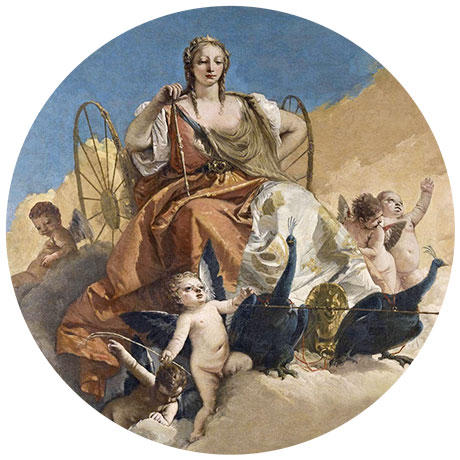 To sense what’s below those clouds, Steffes and his peers will utilize Juno’s microwave radiometer (MWR) instrument. It will measure radio waves from Jupiter’s deep atmosphere, providing a first-ever glimpse of what the planet is made of.

Steffes says microwave radio waves are similar to cell phone signals, which are constantly modified by clouds, rain, and gases.

“If you look at the bars on your phone as you walk next to a fish tank, you’ll notice you’ll have fewer bars. The water absorbs the radio energy from the cell tower to your phone,” he said. “Just like the cell phone idea, we’re going to measure the microwave radiation — the signals coming out of the atmosphere. Based on how they’re affected by the clouds and gases, we’ll know what’s down there.”

While revealing levels of hydrogen, ammonia, and other atmospheric components, Juno will discover the depths of Jupiter’s bands and clouds that are scattered high in the atmosphere. This includes the famous Great Red Spot, which has swirled on the planet for more than 300 years and is two to three times as large as Earth.

Ride along with spacecraft Juno in real-time via NASA's “Eyes on Juno” app for Mac or PC.

Steffes and his graduate student, Amadeo Bellotti, will both be in Pasadena for Juno’s July 4 orbital insert. They’ll standby as Jupiter’s massive gravity pulls in the basketball court-sized spacecraft at a speed of more than 40 miles per second. Juno will counteract that force by using its engines to place itself into a polar orbit around the planet. It takes about 47 minutes for the machine to communicate with Earth, meaning the Georgia Tech scientists will have to hold their breath as they wait for conformational beeps that Juno was successful in its tug-of-war maneuver. 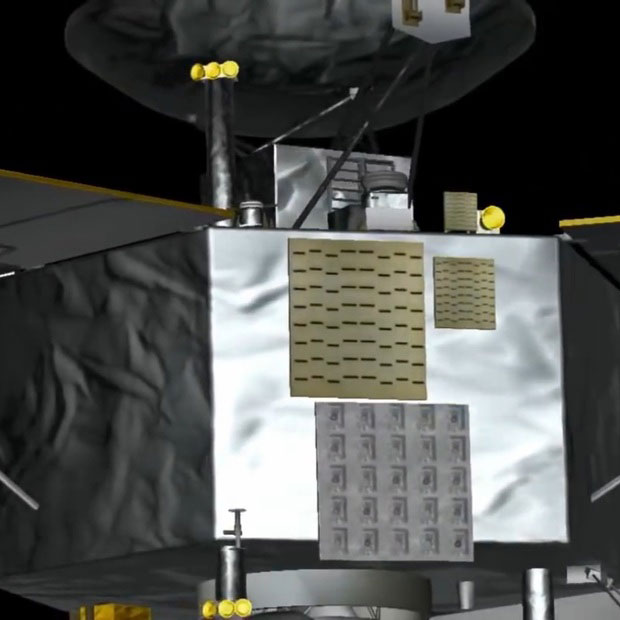 Once Juno finds its orbit, the professor and student will wait until late August for the first MWR data. Then they’ll begin to decipher Juno’s information based on years of work atop Georgia Tech’s Van Leer Building. Steffes’ research group has performed more than 6,000 microwave measurements to simulate the Jupiter atmosphere in their pressure vessel, which is located inside an oven on the roof of the building.

Once they receive the planetary data, they’ll match it with their lab simulations.

“Our measurements cover a variety of pressures, temperatures, and compounds that Juno will likely find during its 20 months in orbit,” said Bellotti.

“This portfolio of possible signatures will, at first look, give us a sense of the elements and compounds that form Jupiter’s atmosphere. Over a period of years, we’ll discover the actual mixture of different constituents in the atmosphere.”

The MWR is just one of Juno’s nine instruments. The others, which Georgia Tech is not associated with, will help determine the core of the planet; map magnetic and gravity fields; explore the planet’s poles, auroras, and magnetosphere; and take pictures from never-before-seen vantage points.

Jupiter contains more material than every other planet, comet, and asteroid in the solar system, combined. It was the first planet to form, and scientists believe it can unlock countless mysteries of the solar system’s formation.

“I think we’re going to be surprised by what we find,” said Steffes. “I think we may discover that conditions vary from location to location.

For example, conditions under the Great Red Spot could be totally different from the rest of the planet. It will be very interesting and exciting.” 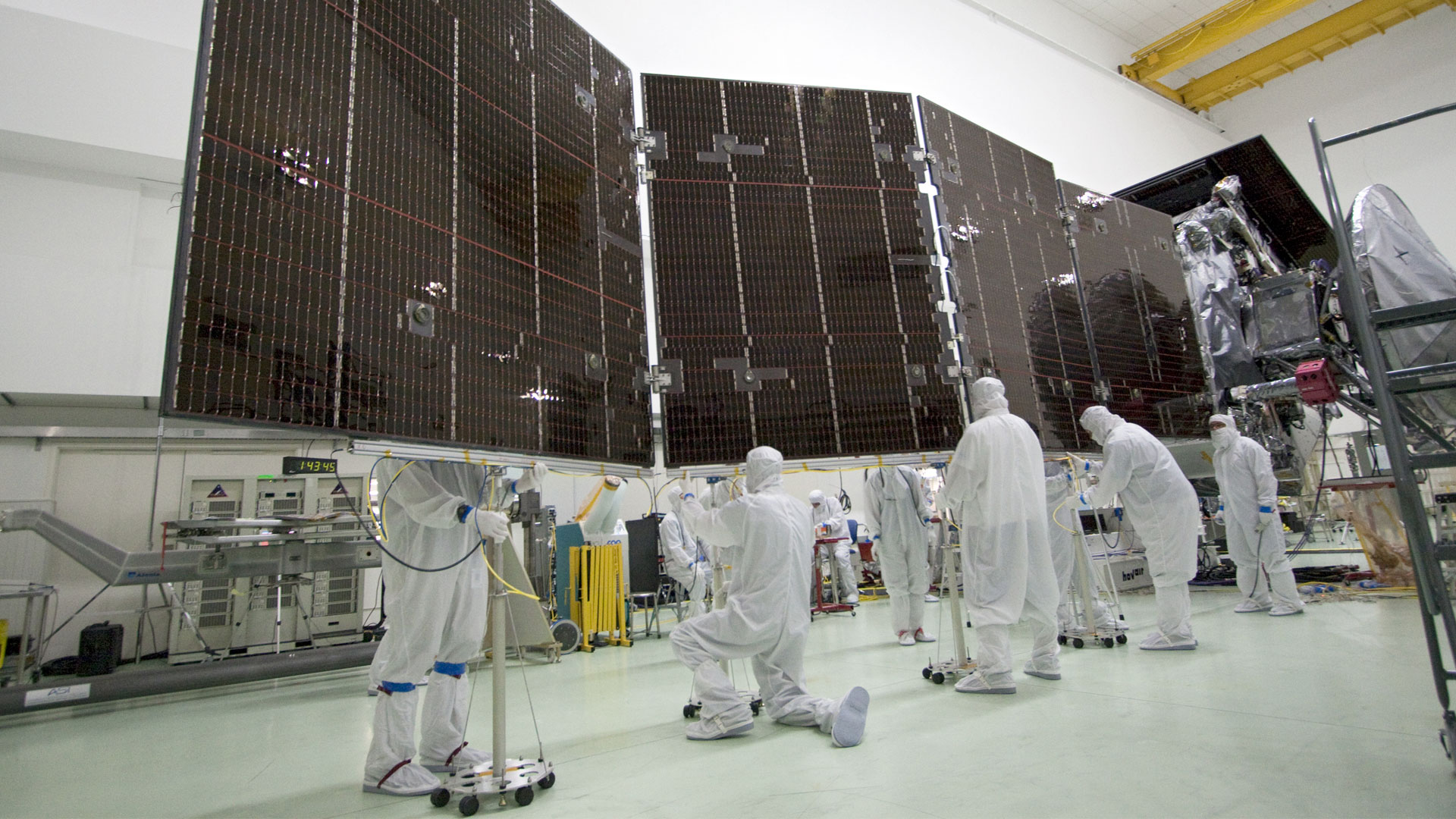 By Jackie Nemeth | School of Electrical and Computer Engineering | June 30, 2016

Since his arrival at the Georgia Tech School of Electrical and Computer Engineering (ECE) in 1982, Paul G. Steffes has had substantial support from NASA to develop techniques for using microwave systems to remotely sense the composition and structure of planetary atmospheres.

His research has supported Magellan-Venus, which mapped the surface of Venus and determined the topographic relief of the planet; Pioneer Venus, which investigated the solar wind in the Venusian environment, mapped the planet’s surface through a radar imaging system, and studied the characteristics of the upper atmosphere and ionosphere; and Juno, with which he has been involved since 2005. Juno’s goals are to understand the origin and evolution of Jupiter, look for a solid planetary core, map its magnetic field, measure water and ammonia in deep atmosphere, and observe auroras.

In addition to support for the Juno mission in particular, Steffes’ research in this area has been supported by NASA under a continuous, single subject grant for over 31 years, making it the longest-running NASA research program at Georgia Tech. His total career support for all of his solar system research activities totals $5.5 million. He and his team have produced 160 journal and conference papers, and he has graduated 14 Ph.D. students who have published dissertations that focus on this area. 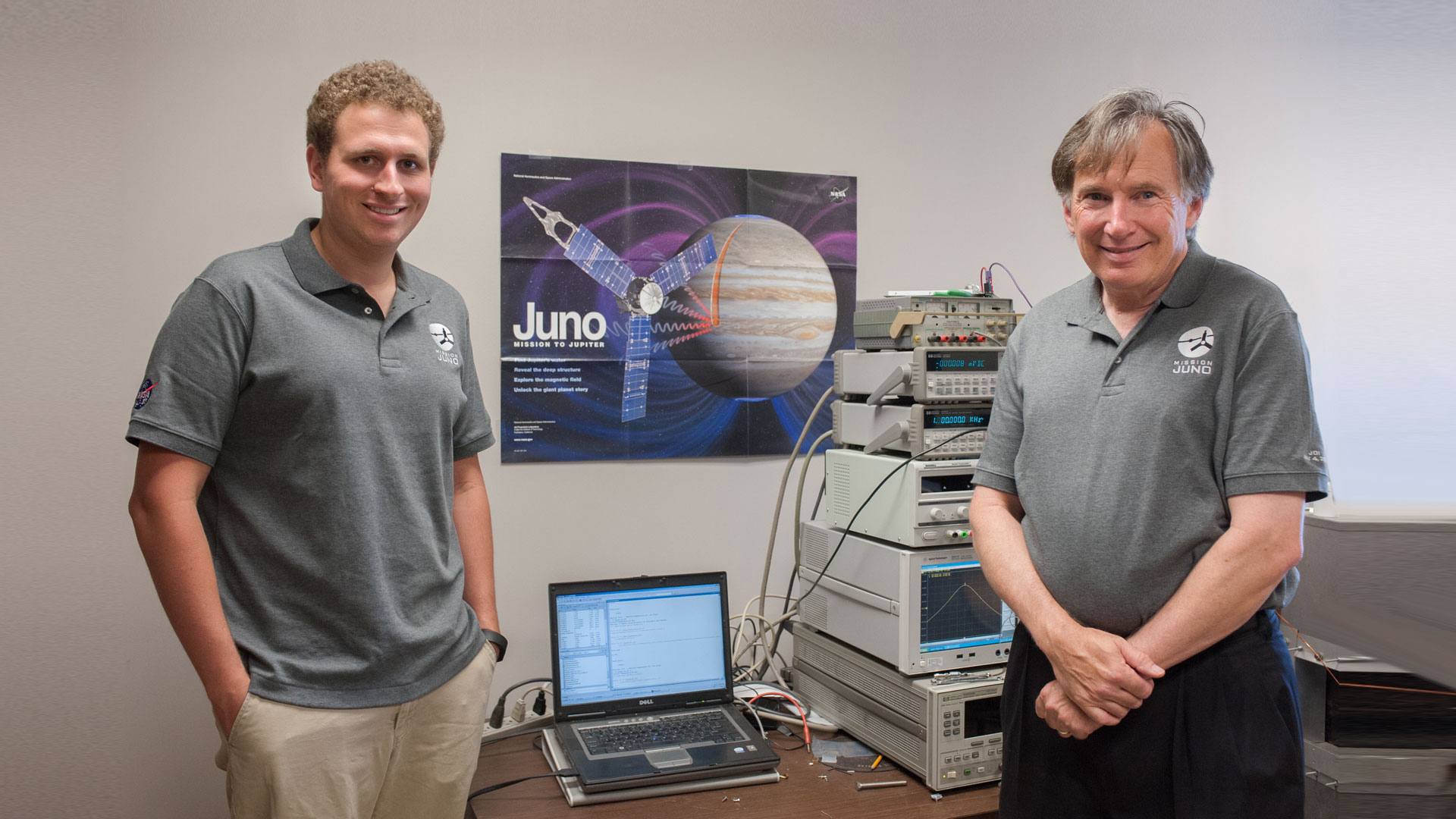 Over the years, Steffes has also worked on the design and implementation of Earth-based microwave and millimeter-wave measurements of the emissions from planets, using facilities such as the National Radio Astronomy Observatory’s Very Large Array (VLA), the largest single-site radio telescope in the world located west of Socorro, New Mexico.

In 1991, Steffes was selected by NASA to serve on the investigator team of the High Resolution Microwave Survey, a program to search for artificial microwave signals characteristic of civilizations outside our solar system. When Congress acted to terminate the program in 1993, a new donor-funded program for the search for extraterrestrial intelligence was begun by the SETI Institute in Mountain View, California.

Steffes’ leadership in planetary atmospheric research has been recognized by several national and international groups and at Georgia Tech.

In 1996, Steffes received the IEEE Judith A. Resnik Award “for contributions to an understanding of the Venus atmosphere through innovative microwave measurements.”

NASA also recognized the level of his contributions by naming him to the NASA Advisory Council (Planetary Science Subcommittee) in 2010 and to several mission selection panels. Steffes has also chaired several NASA research grant selection panels and sub-panels. At Georgia Tech, he was recognized with the ECE Distinguished Faculty Achievement Award in 2010 and the D. Scott Wills ECE Distinguished Mentor Award in 2015.

HOW FAST CAN JUNO GO?

When arriving at Jupiter, the planet's gravity pulls in Juno faster and faster until the spacecraft reaches a speed over 150,000 MPH — with respect to Earth — making it one of the fastest human-made objects ever. 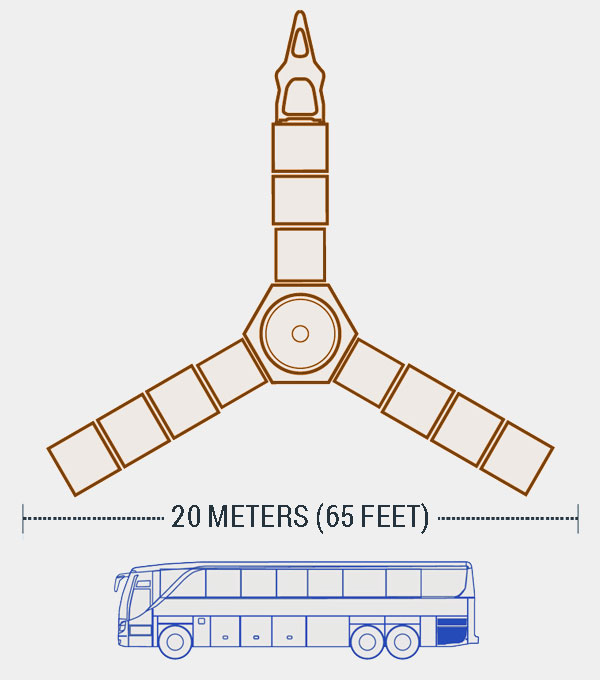 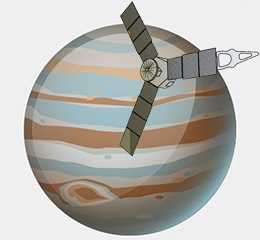 Juno's principal goal is to understand the origin and evolution of Jupiter. Underneath its dense cloud cover, Jupiter safeguards secrets to the fundamental processes and conditions that governed our solar system during its formation.

With its suite of science instruments, Juno will investigate the existence of a solid planetary core, map Jupiter's intense magnetic field, measure the amount of water and ammonia in the deep atmosphere, and observe the planet's auroras.

Juno will let us take a giant step forward in our understanding of how giant planets form and the role these titans played in putting together the rest of the solar system.

BACK TO ALL FEATURES