A Day with TODAY

Story and photos by Jason Maderer

But inside a TV studio, nothing is automatic. A long series of steps must go exactly right for weeks of planning to transform into a seamless, five-minute news segment.

On Friday, May 15, a team from Georgia Tech’s Center for Music Technology watched the magic first-hand in New York City — and created a little of their own. The group, led by Professor Gil Weinberg, brought its musical robots to NBC’s TODAY Show. It was a long journey for a short stint. There were a few bumps along the way, but it was an experience the team won’t soon forget.

The Future of Music


Gil Weinberg and Mason Bretan talk about what it was like to be on the TODAY Show.

Weinberg is the director of the Institute’s Center for Music Technology. He creates robots that make music ­– machines that play alongside human performers and inspire them.

His signature robot is a four-armed, marimba-playing machine that “listens” to the music in the room, them improvises with compositions of its own.

In his spare time, Weinberg also organizes the annual Margaret Guthman Musical Competition, a contest held on campus each February that features strange instruments of tomorrow.

That’s what caught the attention of the TODAY Show as it was developing a segment about the future of music.

An NBC producer first contacted Weinberg in April with an invitation: he, his robots, Ph.D. student Mason Bretan and two Guthman competitors are headed to the famous studios in Rockefeller Center for a live segment in the middle of May. Weinberg and Bretan will perform with Shimon, the marimba-robot, and three dancing Shimi bots.

A Setback During Setup

It’s almost 4:30 p.m. on Thursday, May 14, the day before the morning show performance. Weinberg and Bretan are in the TODAY Show studios to begin setting up the robots. They’re joined by Deepak Gopinath, who received his master’s degree in music technology from Georgia Tech two weeks earlier.

The show’s familiar set is rather bland. It looks nothing like what you see on TV. The desks are covered in blankets and there are no cameras. But there are tourists on 49th Street, constantly peeking through the windows for a glimpse.

“It’s kind of like a zoo,” Bretan says to no one in particular.

The rules are different in here. Even though Bretan and Gopinath know the robots better than anyone, they’re not allowed to touch them yet. A four-person NBC crew are the only people who can take the machines out of the boxes and put them in place. These are union rules.

What’s it like to be unable to touch the robots you handle every day in the lab? “It’s uncomfortable, actually,” Bretan says with a smile.

Bretan keeps his hands off and directs the workers. The Shimis are unpacked first. Next comes Shimon.

Weinberg has been working with robots for decades. He knows they’re a fickle bunch. Millions of electronic parts make the machines unpredictable. Most of the time they work. Sometimes they don’t.

“Set-up is the easy part,” Weinberg notes. “The hard part is plugging in the final cord on the final robot, turning them on and hoping they all move. That’s when the stress level goes up.”

“It looks like Shimon’s head took a beating,” Bretan says with more than a hint of worry when he sees the silver structure come out of the box. It’s not actually Shimon’s head, but rather the electronics underneath it that control its head.

A special USB port is broken into several pieces. It must have shattered in the delivery truck to New York. Without a new piece, something that isn’t available at a corner drugstore, the head won’t move.

It’s 5:15 and phones appear. Online searches begin and a call is placed to the local B&H, an electronics store. The needed piece is discontinued. The store has something similar. It’s 19 blocks away and closes in less than two hours. Weinberg leaves and hopes for a little luck.

He’s back by 6:30, carrying about five replacement parts in case the first one doesn’t work.

“I think we’ll fix it,” he confides. “But now I’m wondering if other things are smashed.” If they are, there’s no hope. The store is about to close and won’t open until after they’re on TV in the morning.

They replace the part by 7 p.m., boot up the computer and wait a minute for everything to configure. Bretan hits a button. Nothing happens. They switch out a power supply and try again. Nothing.

They recheck the computer, plug in a new transmitter and give it a go again. This time Shimon slowly sways to the left. Weinberg lets out a relieved gasp. Life is good again. 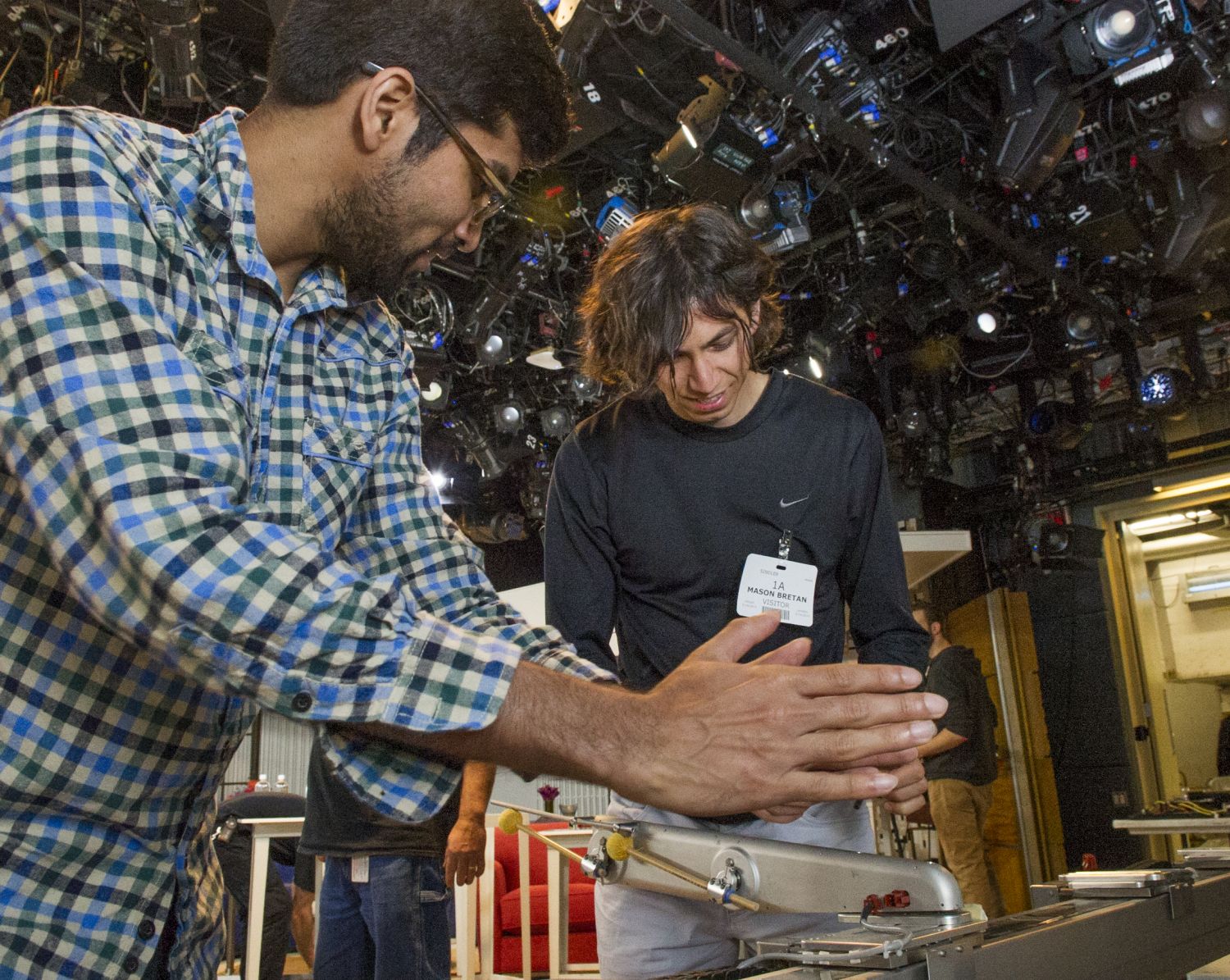 The electricians arrive in the morning, so the Georgia Tech team can’t check the entire system. It’s 7:15 p.m. and time to leave.

Tomorrow’s sound check is at 5:15, but Bretan plans to return at 4:00 to test everything else. He’s a Georgia Tech student, so he’s used to long nights and early mornings. And this is the city that never sleeps. 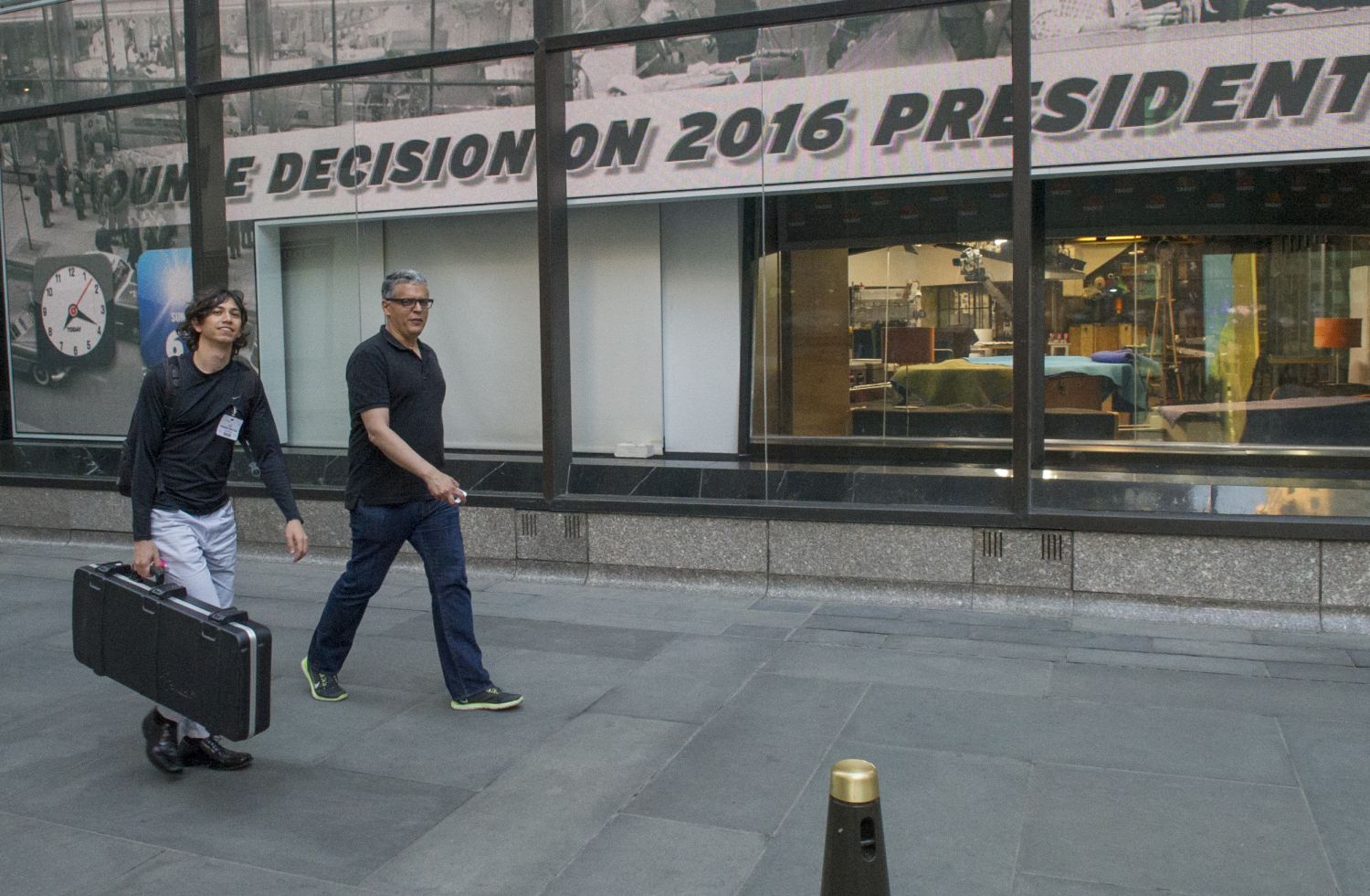 Live from Studio 1A in Rockefeller Plaza

The scene has been transformed overnight. TODAY Show and NBC logos are illuminated on video screens and cameras are in place.

The Guthman instruments, the Nomis and Magnetic Percussion Tower, are on both sides of the Georgia Tech robots. The set is bathed in blue hues. Bretan has electricity and finds that everything is working just fine. It’s the first sign this will be a smooth morning.

He runs through a few sound checks with the robots until Weinberg enters the studio at 5:10 a.m. They’ll practice and set audio levels for another half hour. 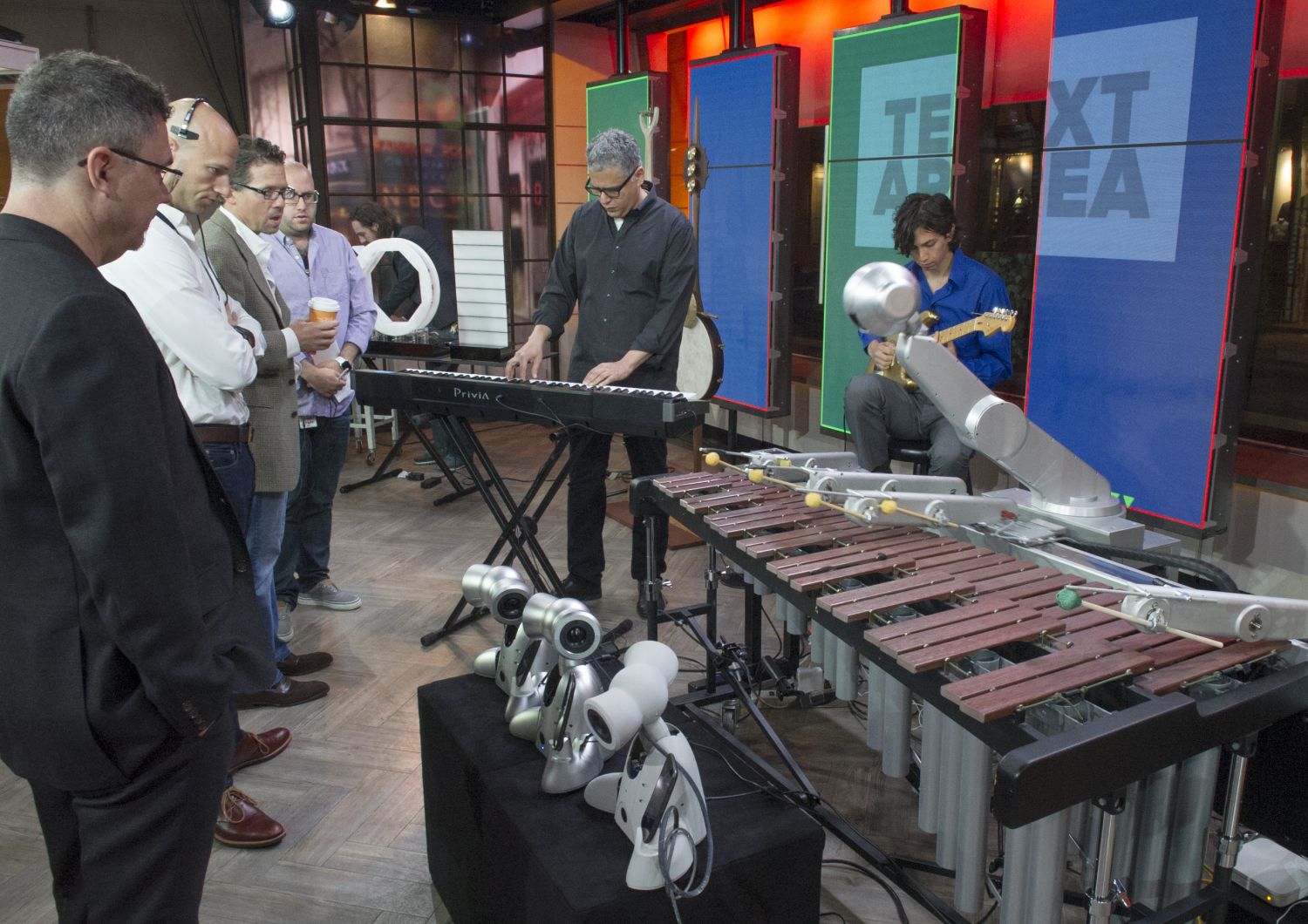 The producers work with them to map out where everyone, including the four hosts, will stand and what they’ll say during the segment at 8:19 a.m.

The famous anchors haven’t been involved in any of the practice sessions. This is another norm the audience doesn’t know: the first time the musicians see and interact with the hosts will be just moments before airtime.

The group watches the show begin at 7:00 a.m. from a TV in the dressing room. At 7:49, exactly a half hour before the segment is set to begin, everyone is back in the studio.

The gang gets its first glimpse of Savannah Guthrie, Matt Lauer, Natalie Morales and Al Roker, who are moving from set to set inside and outside the building. Cameras are rotated this way and that.

It’s enough to make a person dizzy as the action rotates around the musicians with precise timing and teamwork.

With 11 minutes to go, Guthrie promotes the segment and Shimon makes its live, national TV debut. The robot taps a few bars on the marimba with Bretan on guitar and Weinberg playing keyboard.

Lauer is apparently impressed with what he sees on the monitor from the across the room. He admits during the commercial break that he missed saying a line during the promo because he was captivated by the robot.

At 8:19, Guthrie sits at the news desk and introduces a pre-taped story about Ed Potokar, one of the Guthman competitors. She took a camera crew to his studio two hours north of the city a few weeks ago to see his percussion tower and other homemade instruments, the same ones that are in the studio now. As the two-minute story plays on the air, the TODAY Show hosts move into position and say hello to Weinberg, Bretan, Potokar and Jonathan Sparks, the other Guthman competitor. Lauer stands next to Weinberg and will interview him on-air.

Potokar’s profile ends and the live segment begins with Sparks demonstrating his light-up Nomis. Then it’s Georgia Tech’s turn. Lauer asks Weinberg to explain Shimon and the Shimis. Bretan hits a button and the robots move on cue, just as they’re supposed to.

“That’s cool!” exclaims Lauer as Weinberg and Bretan play along. “So could this change the way we collaborate with robots in the future?”

“I hope so,” Weinberg answers. “(Shimon) plays like no humans can and hopefully it will inspire me to play like I could never have played before.”

Roker then asks Potokar about his odd instruments and the rest of the hosts grab one. The segment ends with a jam session for all eight people and the four robots.

The NBC anchors clearly enjoyed the segment, laughing and smiling as the commercial break begins. Lauer extends a handshake to both Georgia Tech folks and thanks them for coming. And just as quickly as they suddenly appeared to say hello, the hosts are gone, racing off for a different segment somewhere else.

They’re not the only ones happy with the live, three-minute segment.

“It went very well, but it felt like it was two seconds,” Weinberg says. “Live TV has a very fast pace, and it was interesting to experience. It was fun.”

“Luckily there weren’t any hiccups that were too detrimental to our performance,” Bretan adds. “You spend all these hours putting everything together, and we had about 15 seconds to fill with Shimon and the Shimis. It was a blast. I’m glad we did it.”

As they leave the studio, one TODAY Show assistant turns to another. “You know, that went exactly as it was planned. And that doesn’t happen all that often around here.”

Maybe not exactly, thanks to a broken robot, a frantic shopping trip and a stressed night of little sleep. But sometimes live TV can even deceive people behind the scenes too.