Hillary Degenkolb is the first woman to sit in the driver’s seat of Georgia Tech’s Ramblin’ Wreck since 1988.

She has had her eye on the Ramblin’ Wreck ever since she set foot on campus.

“I was one of those dorky freshmen who jumped up and down whenever I heard the horn and saw the Wreck coming,” says fifth-year computational media major Hillary Degenkolb.

Now the Atlanta native is blowing that signature horn herself. Degenkolb was elected by the 50-member Reck Club to be the 2015 Wreck Driver. 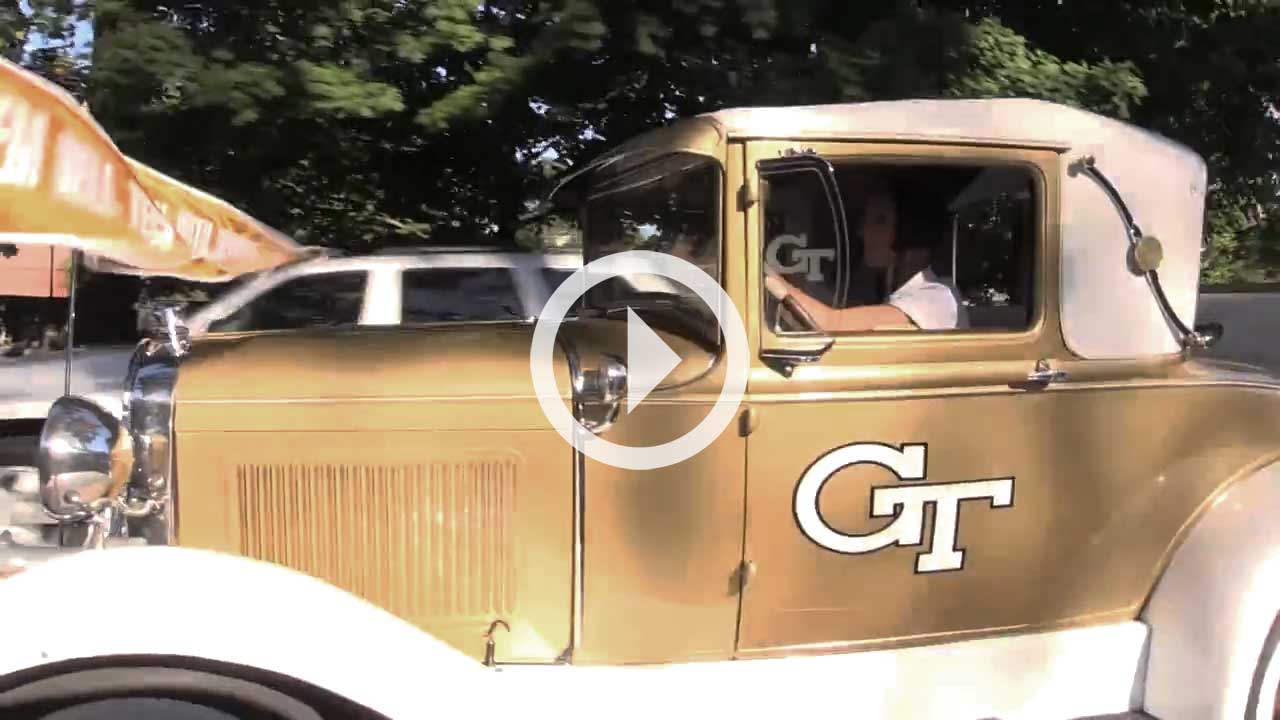 Degenkolb has been active with the Reck Club since her second year on campus. Reck Club maintains many of the traditions Yellow Jackets hold dear including the Freshman Cake Race, the Mini 500, and of course the Ramblin Wreck.

She is the third woman to sit in the driver’s seat of the 1930 Ford Model A sport coupe after Lisa Volmar in 1984 and Evelyn Dale Morgan in 1988. Degenkolb says she never saw gender as an obstacle preventing her from piloting one of the most recognizable cars in the country.

“I never saw being a girl as a roadblock. I just wanted to continue that legacy,” she says.

Degenkolb has connected with Volmar, the first female to drive the Wreck. The two have been able talk about how the car runs and the challenges of keeping it in tip-top shape. Volmar is now the mother of a current Reck Club member.

For the first time in Georgia Tech’s history, the current Student Government president (Jennifer Abrams) is a female, the Reck Club President (Zola Zalesky) is a female, and Wreck Driver is a female.

“Now students can say it’s not weird to have a female Wreck Driver. Of course that can happen.”

Behind the wheel, Degenkolb leads the Yellow Jacket football team onto historic Grant Field at every home game, maintaining a tradition that was started in 1961 against Rice University.

She is one of just 54 people to ever drive the vehicle. And there’s more to the position than that game day drive onto the most historic field in Division I football. Degenkolb is responsible for all maintenance and repairs to the vehicle.

“Most of my official Reck Club polos are covered in grease and oil,” Hillary says.

In everything from engine upkeep to balancing tire pressure, and making sure the gold chassis is polished and the chrome accents are gleaming and bright, Degenkolb is calling upon the times she worked on cars with her father. 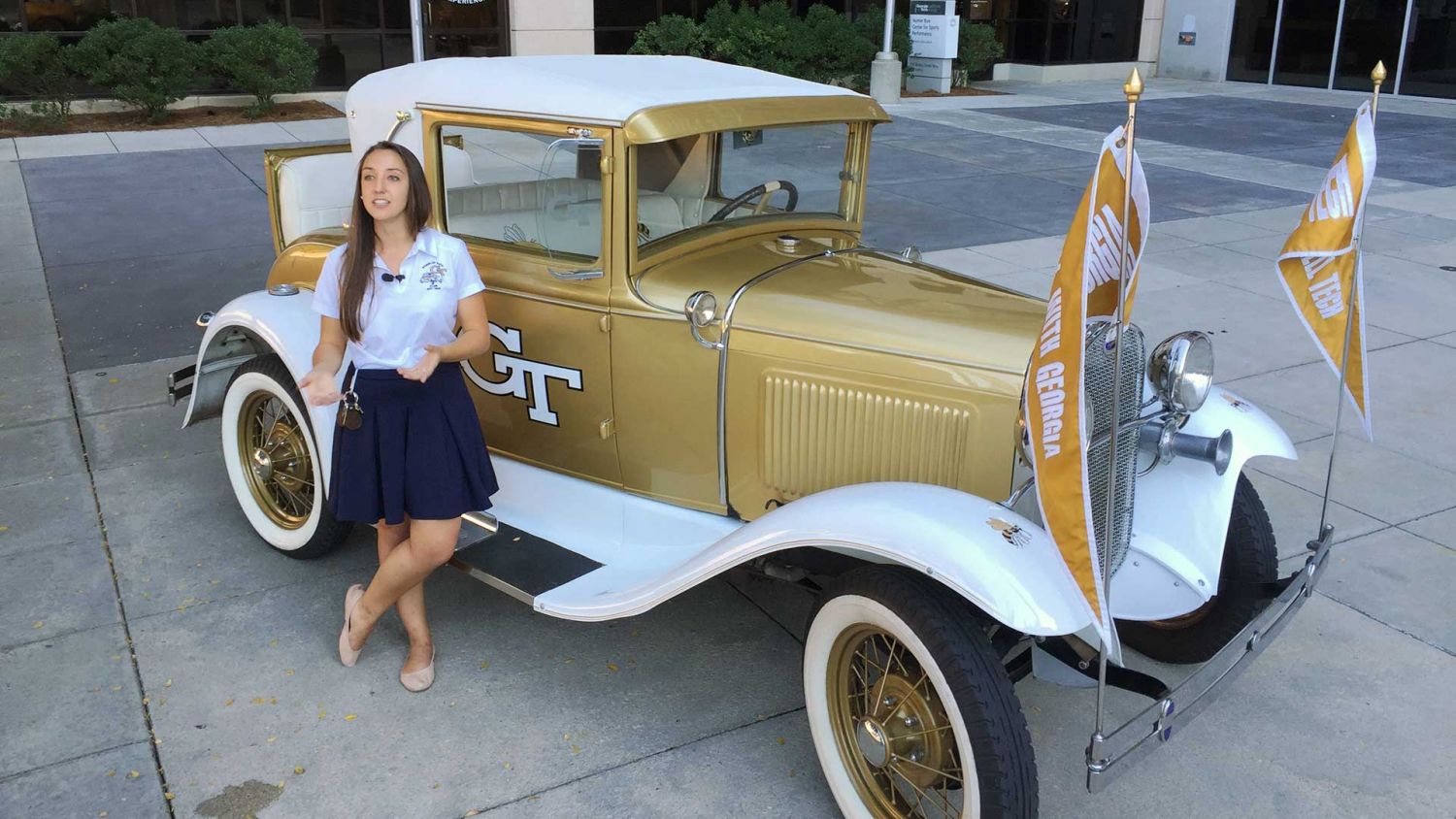 Hillary Degenkolb is the third woman to sit in the driver’s seat of the 1930 Ford Model A sport coupe after Lisa Volmar in 1984 and Evelyn Dale Morgan in 1988. Photo: Melanie Goux

“I love getting under the car and figuring out what she’s all about,” she says. “It’s actually a pretty simple engine.”

Simple, but not without an occasional hiccup. A last-second repair was necessary before the first home football game. Degenkolb, her fellow Reck Club members, and a couple of former drivers used zip ties to repair the carburetor. Without that fix, the car might not have made it onto the field.

“There was no doubt in my mind we were going to make it happen,” Degenkolb says.

After that game she worked with a mechanic who specializes in antique vehicles to make a more permanent repair.

“She’s been driving beautifully ever since,” Degenkolb reports with a smile. “It’s basically all the things that happen to a regular car. This one’s just older and prettier.”

Football games and flash fixes have made her tenure interesting, but Degenkolb doesn’t hesitate when asked about what is the best part of being Wreck Driver.

“Those little moments. That’s when this job is the best,” she grins widely.

Degenkolb recalls one of her passengers at the first home game who graduated from Georgia Tech 65 years ago. She says he was moved to tears while riding to his family’s tailgate. He never had the chance to ride in the Wreck while he was a student.

“It’s so special seeing people connect with Georgia Tech on that level,” she says.

Since 1987, students have taken full responsibility for the car and for every appearance it makes. Degenkolb makes it very clear that the Wreck belongs to the student body.

But as for her part in Georgia Tech’s history, Degenkolb feels she’s just playing a supporting role.

“She’s the star,” Degenkolb says patting the passenger door of the Ramblin’ Wreck. “I’m just here to make sure she gets there.”