Update: Friday, October 21 — The crew is safely aboard the International Space Station. They docked early Friday morning, then entered the station just after 8 a.m. Kimbrough will assume command during a ceremony on Friday, October 28.

The next chapter in Georgia Tech’s long history in space begins Wednesday morning, October 19, on a launch pad in Kazakhstan.

Shane Kimbrough (M.S. Operations Research 1998) will settle into his seat aboard a Soyuz spacecraft with two Russian cosmonauts bound for the International Space Station (ISS) for a four-month mission that will include science experiments, spacewalks, and visits from several commercial and international resupply vehicles.

VIDEO: Shane Kimbrough answers the question, "How in the world do you get ready, both physically and mentally?"

Kimbrough has countless thoughts running through his mind while he's counting down to Wednesday's 4:05 a.m. (EST) lift-off. Systems checks. Equipment. The months to come. But what is weighing on him most is family.

“I already miss them,” Kimbrough said during an interview with Georgia Tech last month from Star City, Russia.

It was the second time this summer Kimbrough talked with Georgia Tech, and both times, when asked about the preparation for such a long mission, he quickly mentioned his wife and three children. He’s missing his twin daughters’ first semesters at college this fall and much of his son’s junior year of high school in the Houston, Texas, area.

“Being a military officer, deployments and being gone are nothing new,” said Kimbrough, who served in Operation Desert Storm and is a retired Army colonel. “But I’m realizing that it’s not any easier. In fact, it’s probably harder because of the age of my kids.” 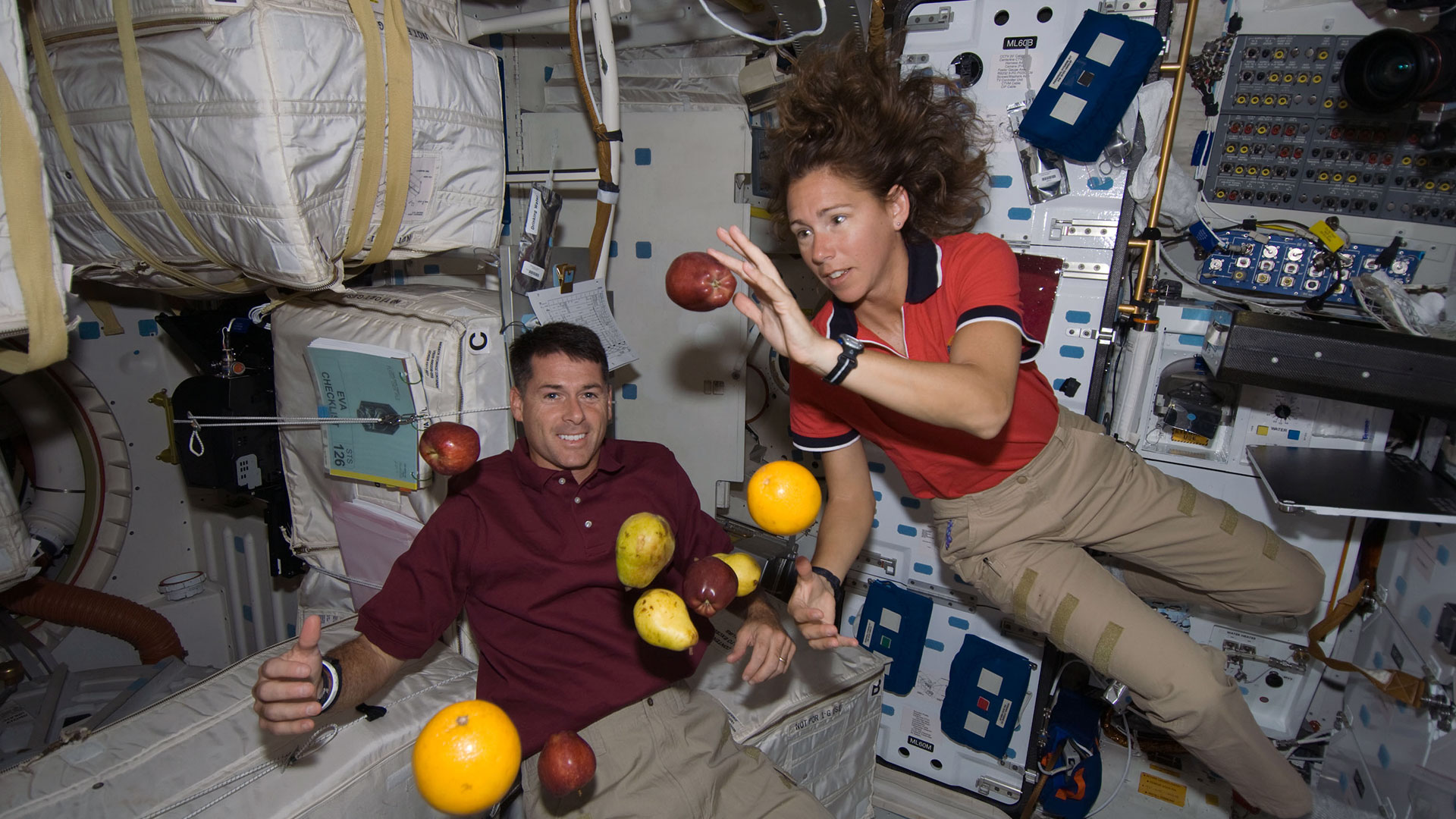 Georgia Tech graduates Shane Kimbrough and Sandy Magnus on board the ISS in 2008. (Courtesy: NASA)

This is Kimbrough’s second trip to space. He flew in 2008 aboard the space shuttle Endeavour for a 16-day mission, far different from the four months or so he’ll spend away from family during this trek. But in a few ways, the missions are similar. The main job for his shuttle mission was to deliver and install equipment that expanded ISS living quarters to accommodate a six-person crew. Three people are already on the space station, so Kimbrough and his crewmates will make six when they arrive on Friday.

Also, just like in 2008, Kimbrough is scheduled for two spacewalks, tentatively set for January.

This time, however, his main mission on the station is to conduct the science experiments.

“A lot of the experiments will be done on our bodies,” he said. “For instance, we’re going to look at mini-exercise devices. In order to get to places like Mars, we’ll need to develop really small things to put in capsules. I’m one of the first people to get to try them, so I’m looking forward to that.”

Kimbrough is one of two Georgia Tech alumni selected to live on the ISS this year. Tim Kopra (M.S. Aerospace Engineering 1995) was commander of the station for four of his six months in orbit (he left in June). Kimbrough will assume command at the end of the month.

VIDEO: Shane Kimbrough talks about his time at Georgia Tech.

Kimbrough grew up in Smyrna, Georgia, attending Georgia Tech football and basketball games. His plan was to play baseball at Tech, but life took him to the United States Military Academy after President Ronald Reagan wrote an appointment letter on his behalf. He earned an aerospace engineering degree at West Point, served in Operation Desert Storm, and eventually came back to campus to study Operations Research in the Stewart School of Industrial and Systems Engineering.

“It was nice to be home after moving around so much while in the military,” Kimbrough said. “I always wanted to be an astronaut, but it’s such a long shot to be chosen. When I look back on it, having a master’s degree from Georgia Tech was a huge stepping stone.”

The next step takes him 210 miles above Earth to an orbiting lab that moves 17,000 miles per hour. Fortunately, he’ll have a few reminders of home. He’s bringing a flag that waved on the Ramblin’ Wreck. He’s also taking a camera and plans to snap photos of Georgia Tech and other schools he attended.

“I’ll also have a few Tech football games piped up to the station. That will keep me going.”

Georgia Tech has produced 14 astronauts, tied for second-most among public universities. They include John Young (B.S. Aerospace Engineering 1952), who walked on the moon and was on the first space shuttle, and Sandy Magnus (Ph.D. Materials Science and Engineering 1996), who flew on the last one. When Kimbrough flew on Endeavour in 2008, he was joined by Magnus and Eric Boe (M.S. Electrical Engineering 1997). 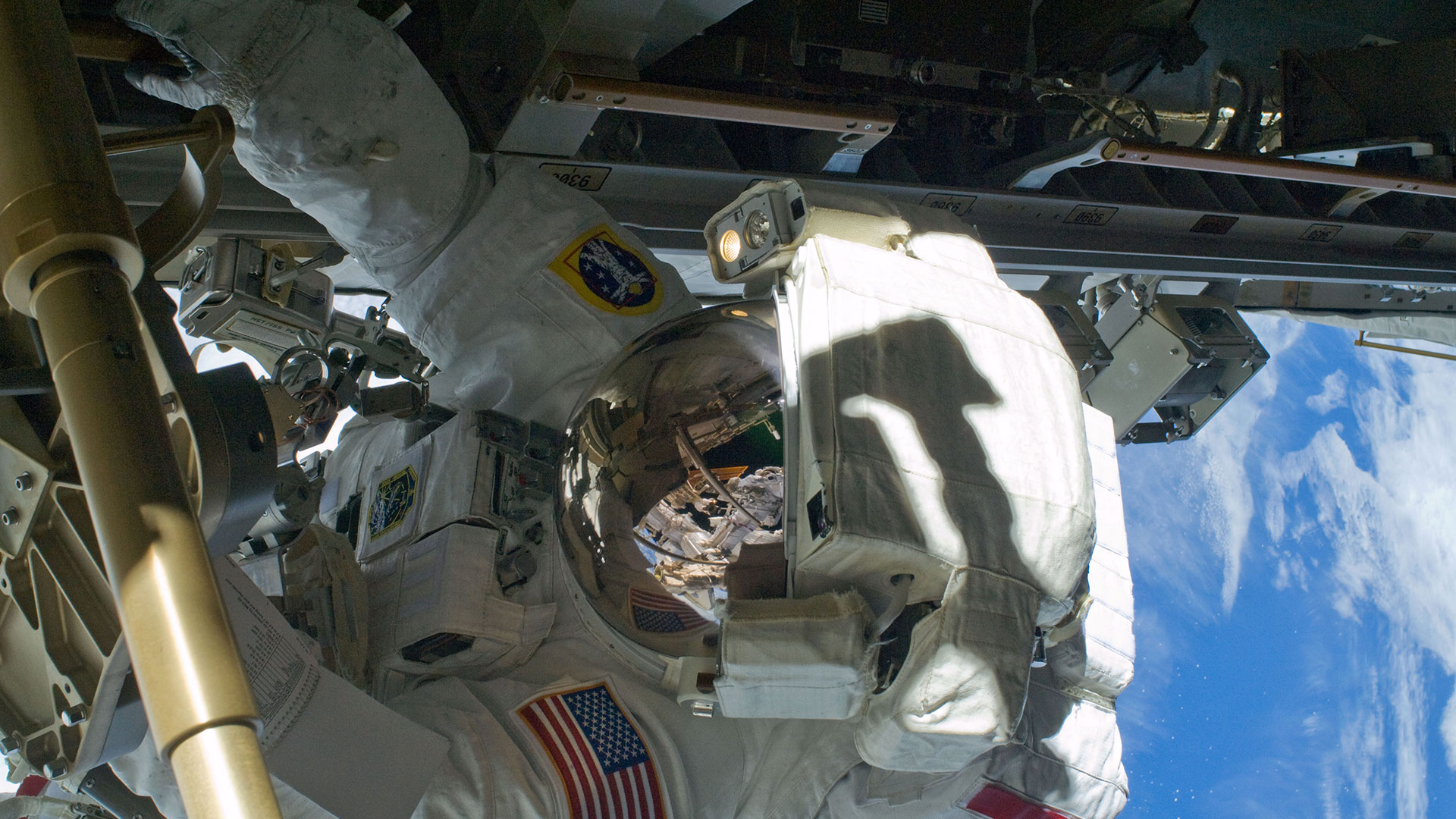 Kimbrough during a six-hour, 45-minute spacewalk outside the ISS in 2008.(Courtesy: NASA)

Here’s a look at more Yellow Jackets who have flown in space: 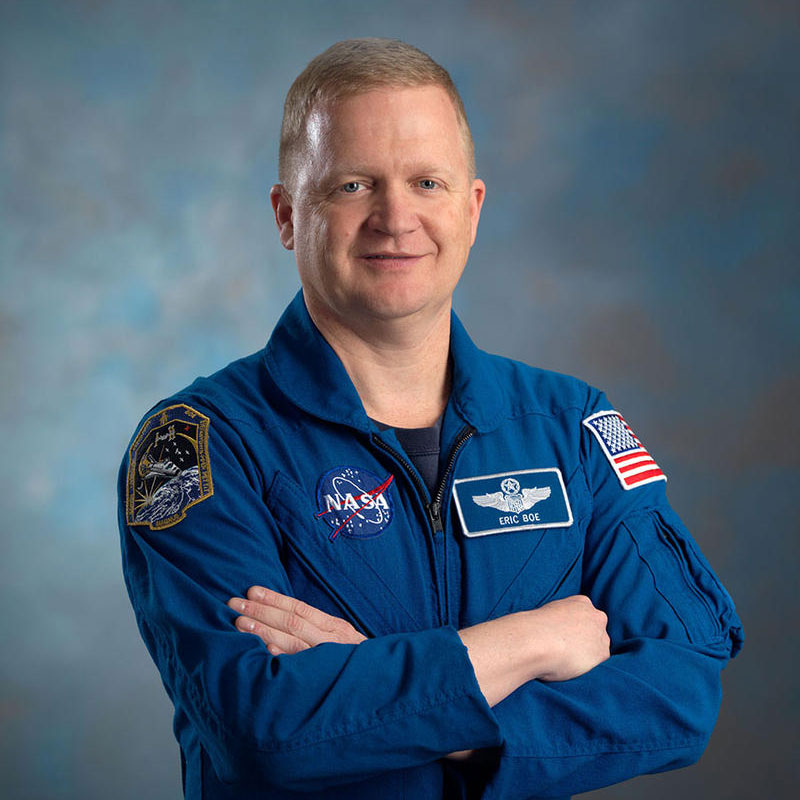 Eric Allen Boe (b. October 1, 1964) was the pilot of Space Shuttle missions STS-126 and STS-133. He's one of four astronauts selected and currently training for the first commercial crew spaceflights to the ISS. Boe grew up in Atlanta and received his Master of Science degree in Electrical Engineering in 1997. 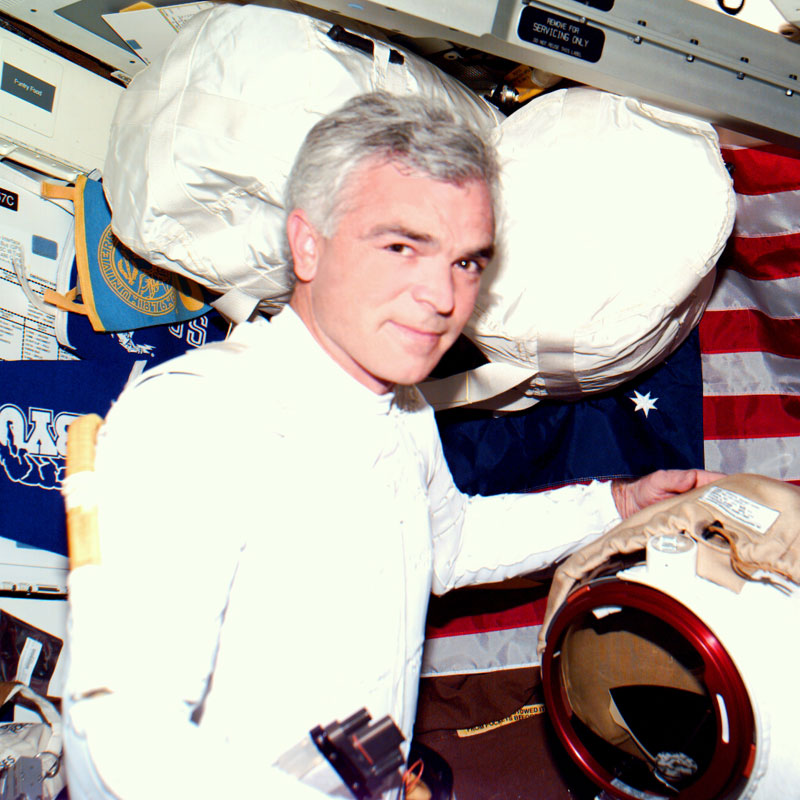 Michael Richard "Rich" Clifford (b. October 13, 1952), is a former United States Army officer and retired. NASA astronaut. He flew on space shuttles Discovery, Endeavour, and Atlantis. His final flight, in 1996, came after he was diagnosed with Parkinson's disease.  He earned a Master of Science degree in Aerospace Engineering in 1982. 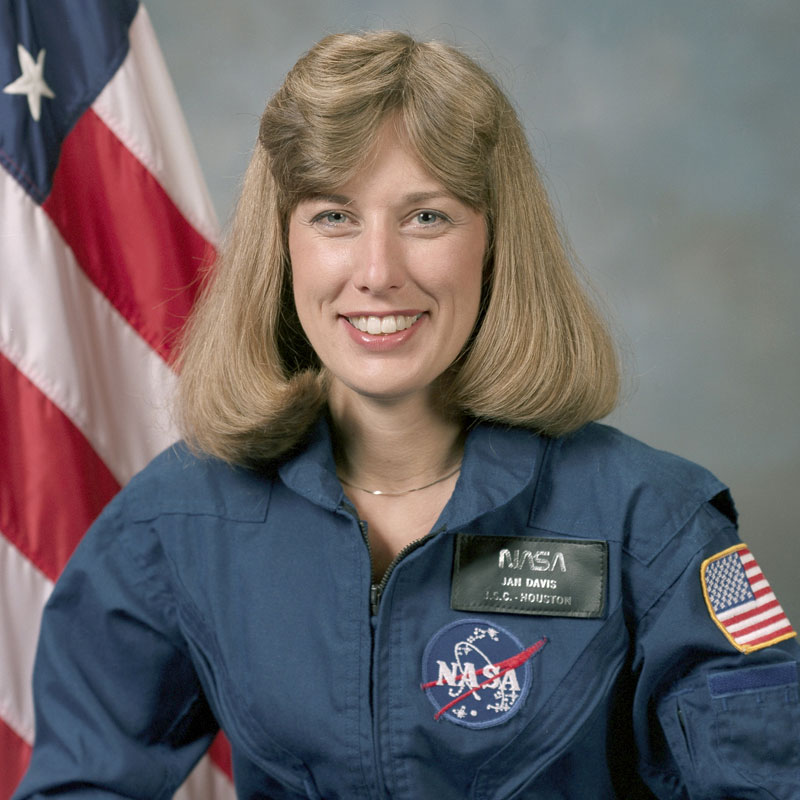 Jan Davis (b. November 1, 1953) flew on three space shuttles and was the first Georgia Tech alumna ever to orbit Earth (1992). She and then-husband Mark Lee were on the same crew, becoming the first (and only) married couple in space together. Davis received a bachelor of science degree in applied biology in 1975. 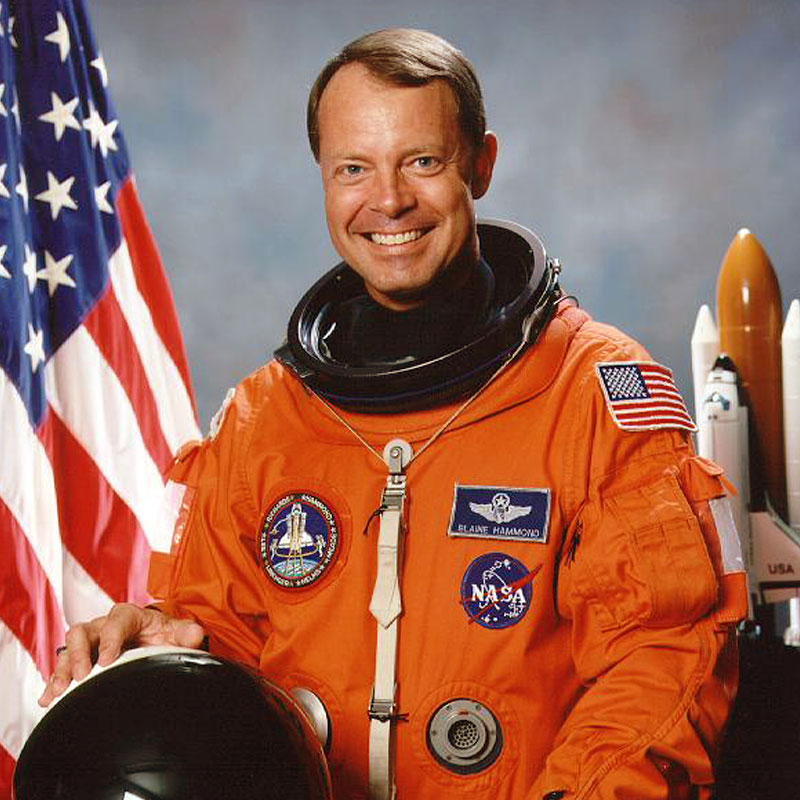 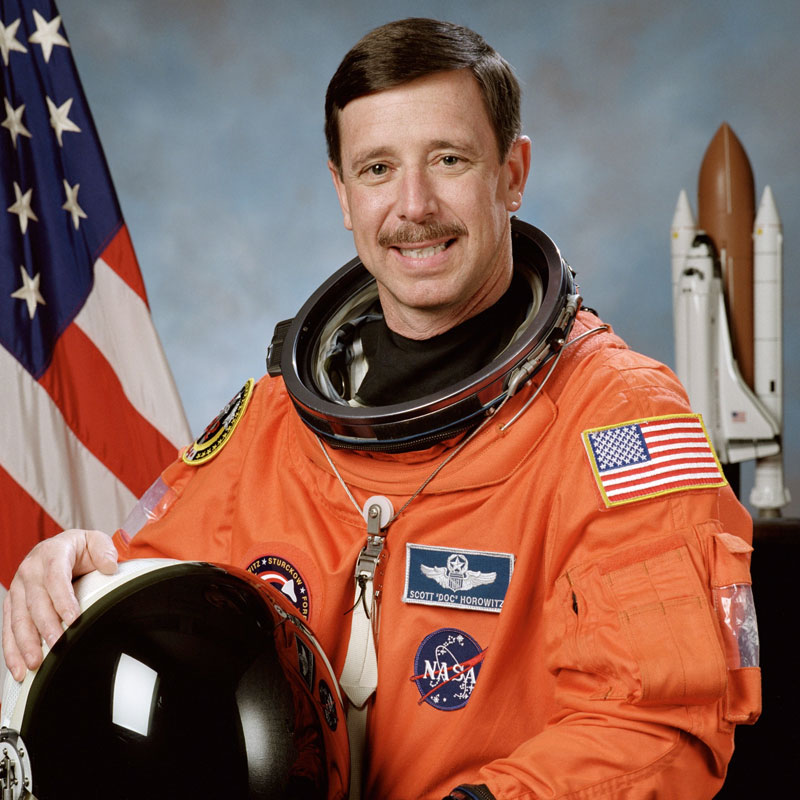 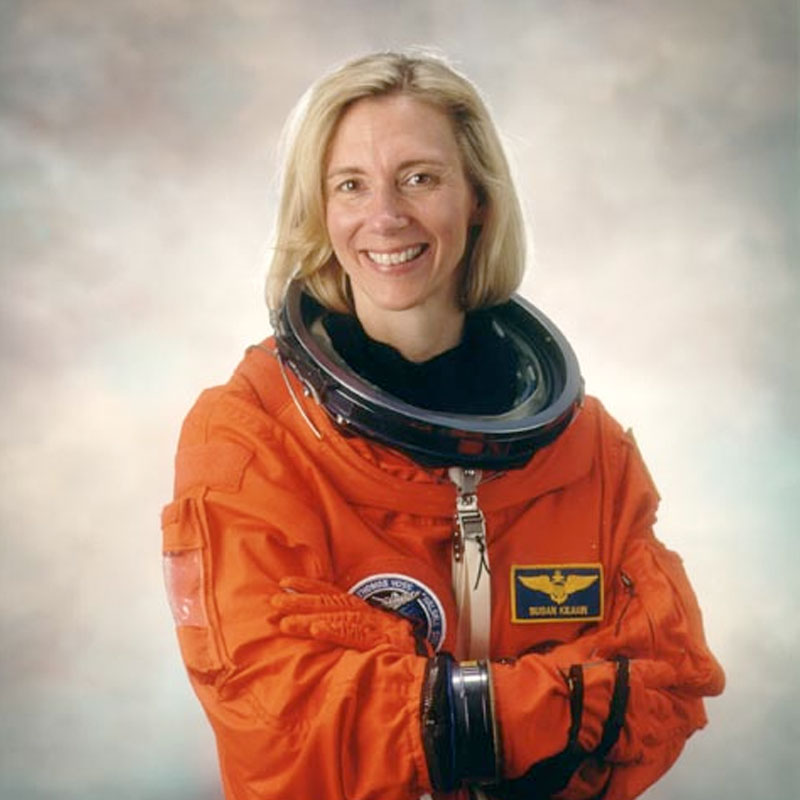 Susan Still Kilrain (b. October 24, 1961) flew on STS-83 in 1997, but a fuel cell problem forced the shuttle to return after three days. The same crew relaunched a few months later, marking the only time in human spaceflight that the same multi-person crew flew together again. She earned a Master of Science degree in aerospace engineering in 1985. 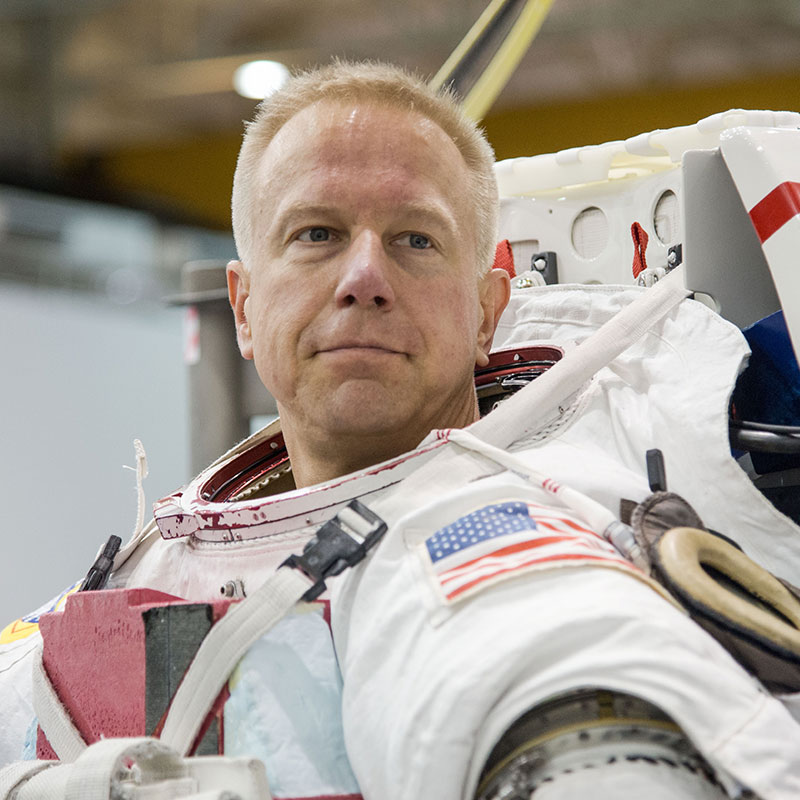 Timothy Lennart Kopra (b. April 9, 1963) served as commander of the ISS from February to June of this year as part of a six-month mission. It was his second time on the space station — he spent two months in orbit in 2009. Kopra received a Master of Science degree in Aerospace Engineering in 1995. 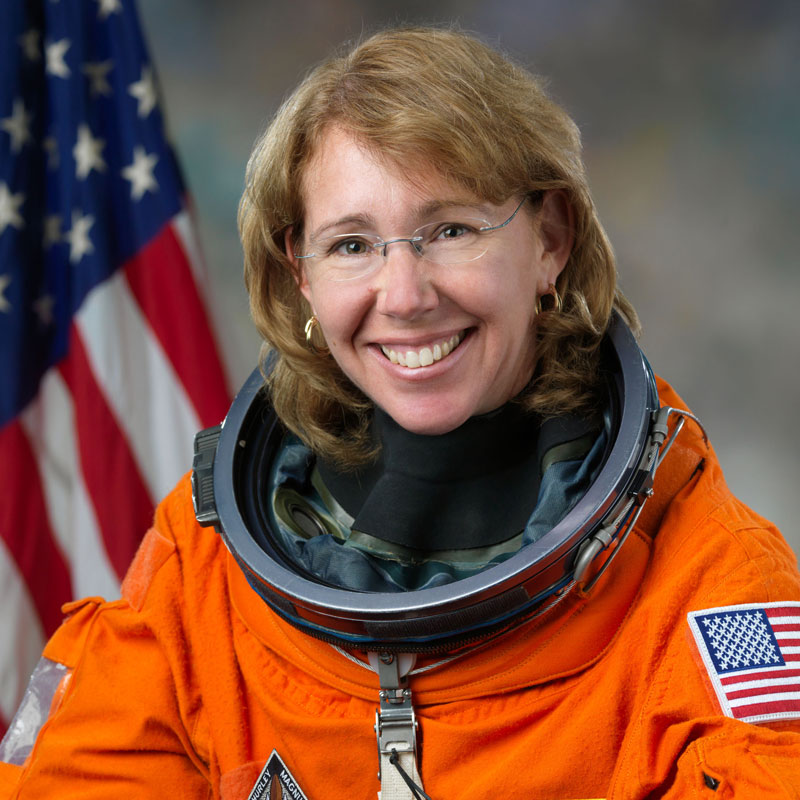 Sandra H.Magnus (b. October 30, 1964) flew on the final space shuttle mission, STS-135, in 2011. She also spent four-and-half-months on the space station in 2008-2009. Magnus is currently the executive director of the American Institute of Aeronautics and Astronautics and earned a Ph.D. in materials science and engineering in 1996. 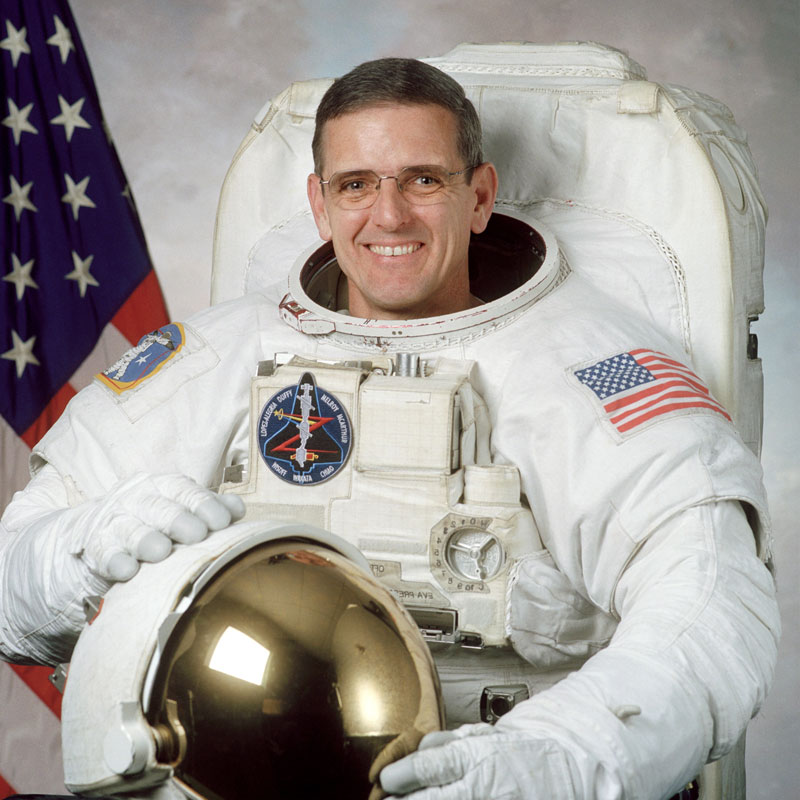 William "Bill" McArthur, Jr. (b. July 26, 1951) is a veteran of three space shuttle missions and one expedition to the ISS via the Soyuz capsule. He has logged nearly 225 days in orbit, which includes four spacewalks. McArthur earned a Master of Science in Aerospace Engineering in 1983. 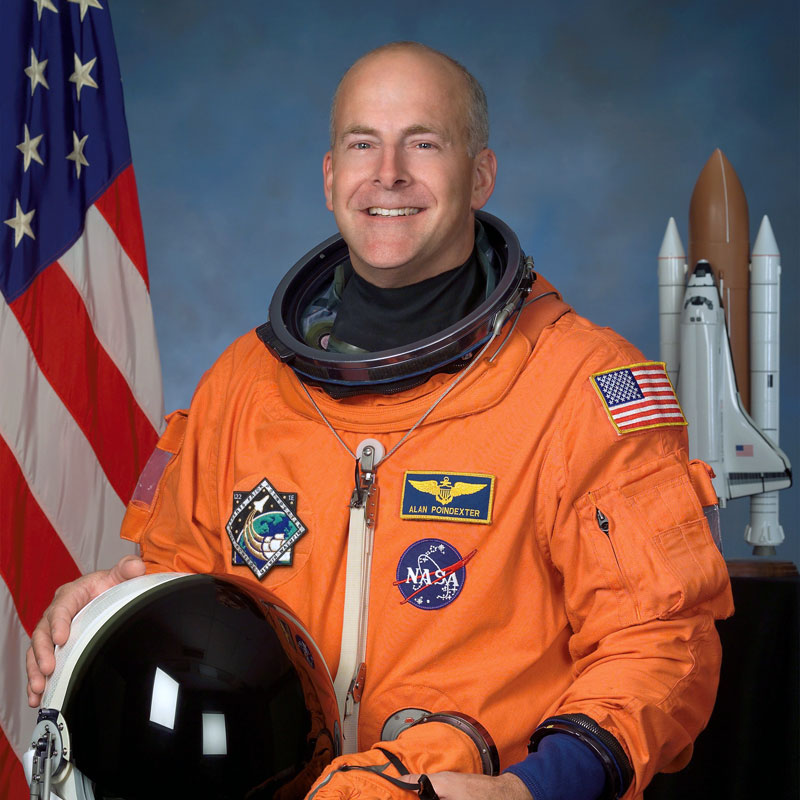 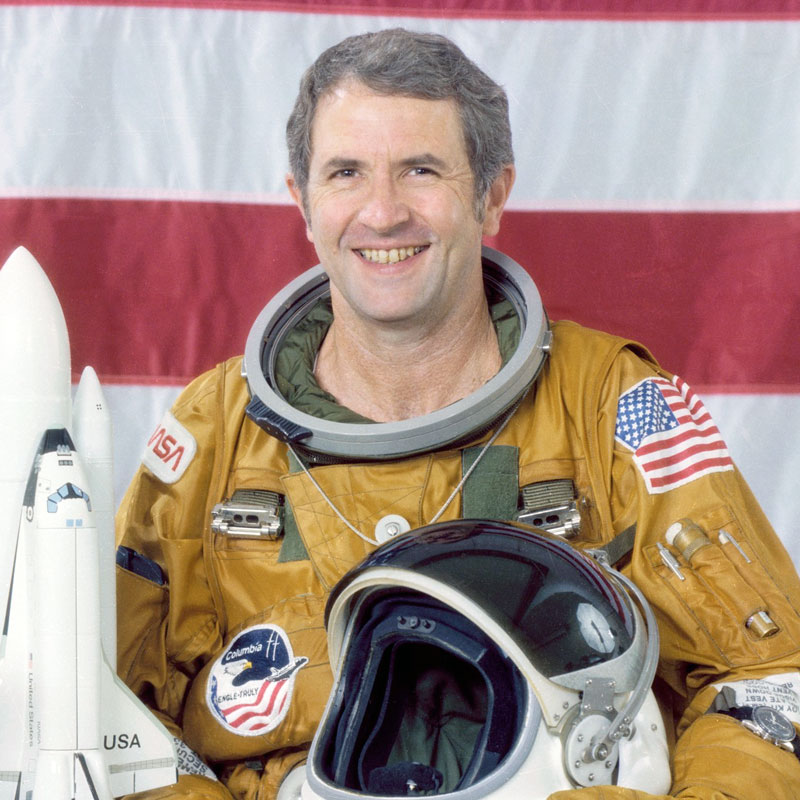 Richard H. Truly (b. November 12, 1937) flew on two space shuttles. He was the commander of the first shuttle night launch and landing in 1983. He later became the eighth administrator of NASA and led the Georgia Tech Research Institute (1992-1997). Truly received a Bachelor of Science degree in Aeronautical Engineering in 1959. 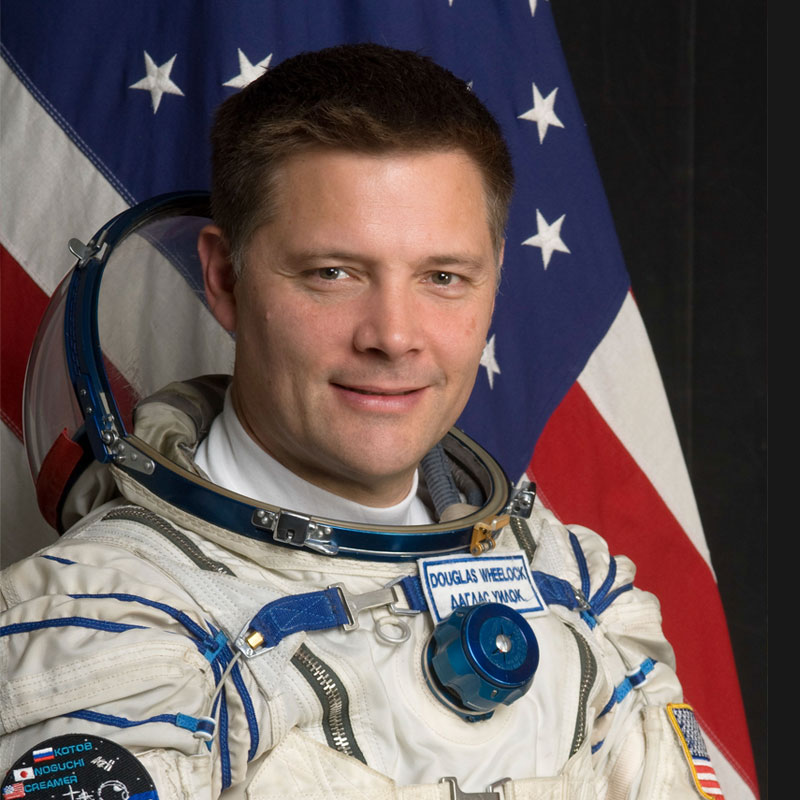 Douglas H. Wheelock (b. May 5, 1960) serves as NASA Director of Operations in Star City, Russia. He flew on one shuttle and spent five months onboard the ISS in 2010, which included a stint as commander of Expedition 25. He earned a Master of Science in Aerospace Engineering in 1992. 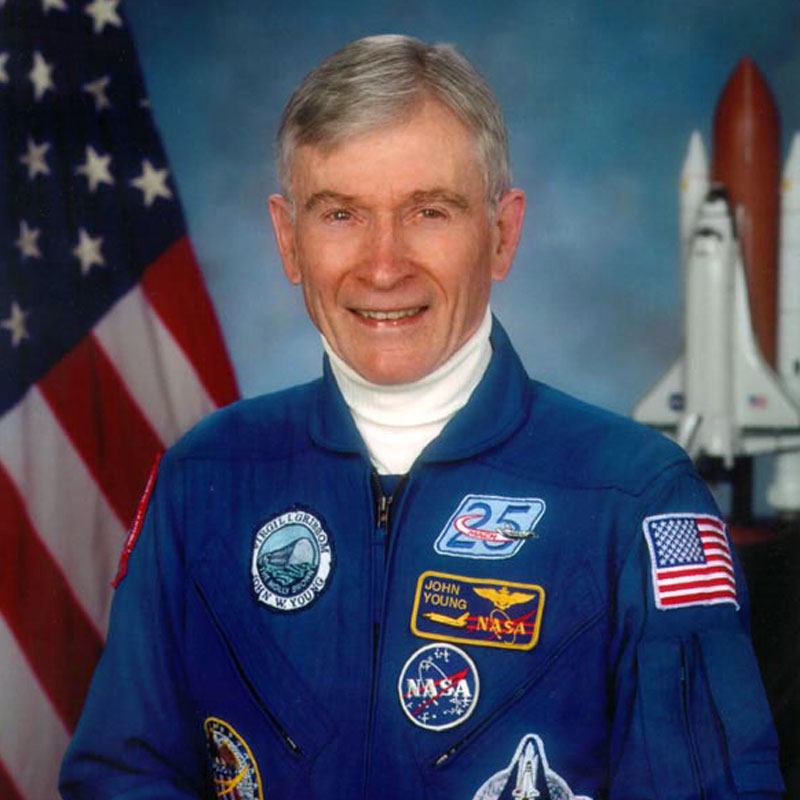 John W. Young (b. September 24, 1930) was the first person to fly six times and is the only astronaut to go into space as part of the Gemini, Apollo, and Space Shuttle programs. He was the ninth person to walk on the Moon (1972) and was commander of the first shuttle (1981). Young earned a Bachelor of Science degree with highest honors in Aeronautical Engineering  in 1952.