Climate models designed to predict how the Earth will respond to changing atmospheric chemistry rely on data from so-called fossil records to help them look into the future. But what exactly are fossil records?

Jessica Moerman and Hussein Sayani know because they’ve held them in their hands. Working with Georgia Tech professor Kim Cobb, Moerman and Sayani have helped translate slabs of cave stalagmite and fossil coral into a 100,000-year history of climate in the tropical Pacific – an area critical to world climate. The information they’ve produced from these ancient rocks gives scientists a better picture of how the Earth responded to past changes in atmospheric carbon dioxide – information critical to improving the accuracy of 21st century climate projections under rising atmospheric carbon dioxide levels.

“I find it absolutely fascinating that geological archives, like stalagmites, contain within their chemistry information about how climate changed over the past thousands of years,” said Moerman. “Collecting and working with samples that contain a record of the Earth’s climate thousands of years into the past has given me a deep appreciation for how long it has taken the world to become what it currently is.”

While Moerman’s work has involved laboratory analysis of samples, her contributions have gone well beyond that.

“One of the most thrilling parts of my research has been traveling to our study caves, which are nestled into the most remote rain forests of northern Borneo,” said Moerman, who’s working on a Ph.D. in the School of Earth and Atmospheric Sciences. “During my first year, I organized a caving expedition to Borneo. I saw some of the most beautiful sights I had ever seen, including massive ballroom-sized cave chambers filled with unbelievable cave formations.” 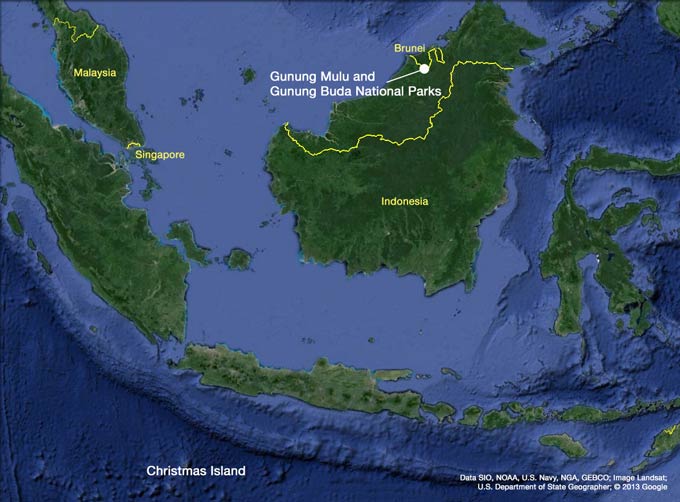 “The fact that these cores were alive thousands of years ago and experienced a world that is so different from ours is awe inspiring.” —Hussein Sayani

Sayani, also a Ph.D. student, works with fossil records that are mere infants compared to the cave stalagmites. He analyzes slabs cut from coral formations that are as much as 7,000 years old, found on the beaches of an island chain in the middle of the Pacific Ocean. Because corals grow roughly a thousand times faster than the stalagmites, they can provide snapshots of detailed temperature and rainfall information. Such records are ideal for studying the El Niño-Southern Oscillation, a Pacific Ocean climate cycle that affects the globe.

“The fact that these cores were alive thousands of years ago and experienced a world that is so different from ours is awe inspiring,” he said. “I was fortunate enough to be part of our lab’s field expedition to Christmas Island (Kiritimati) in May of 2012. We collected a few modern corals, as well as more than 600 fossil corals, some of which are being used by new graduate students in our lab.”

Sayani’s lab work involves X-raying fossil slabs drilled from the coral to understand the direction in which the coral grew thousands of years ago. The slabs are analyzed for the ratio of uranium to thorium, which discloses their ages. Sayani then uses a tiny drill to remove a calcium carbonate sample every millimeter along the slab, each one corresponding to less than a month of coral growth. Each sample is then analyzed by sophisticated mass spectrometry to determine its ratio of oxygen isotopes.

“Some days it’s challenging, frustrating and seems almost impossible to get through,” he confided. “But on most days, it’s fun, exciting, satisfying and rewarding in a way that no other job could be.”

The goal of the work done by both research teams is to construct detailed histories of how the oxygen isotopes in the stalagmites and fossil coral varied over time. When stalagmites form and coral grows, oxygen from rainwater or seawater is incorporated into the mineral calcium carbonate. Changes in rainfall amounts and temperature will affect the ratio of oxygen isotopes in the newly formed carbonate, providing the basis for climate reconstruction in well-dated samples.

The information may help tell us what the future holds for planet Earth, both regionally and globally.

For instance, analysis of more than 1,700 samples from the stalagmites shows that the western tropical Pacific responded to abrupt climate change events very differently than other regions of the globe.

“This record will provide a new piece of the puzzle from the tropical Pacific showing us how that climate system has responded to forcing events over the past 100,000 years.” —Kim Cobb

“This is a new record from a very important area of the world,” said Cobb, an associate professor in the School of Earth and Atmospheric Sciences. “This record will provide a new piece of the puzzle from the tropical Pacific showing us how that climate system has responded to forcing events over the past 100,000 years.”

Among the findings were a few surprises that show just how complicated the Earth’s climate system can be. While the stalagmite record included responses to one group of abrupt changes, another major class of events left no mark on the Borneo stalagmites. However, both types of abrupt climate change events are found in a previously published stalagmite climate record from China – which is north of Borneo.

“To my knowledge, this is the first record that so clearly shows sensitivity to one set of major abrupt climate change events and not another,” said Cobb. “These two types of abrupt change events appear to have different degrees of tropical Pacific involvement, and because the tropical Pacific speaks with such a loud voice when it does speak, we think this is extremely important for understanding the mechanisms underlying these events.”

Cobb and her students recovered the stalagmites from caves in Gunung Mulu and Gunung Buda National Parks in Borneo, a few degrees north of the Equator in the western Pacific. The coral data, on the other hand, came from beaches on Christmas and Fanning Islands.

“As a society, we haven’t really thought enough about the fact that we are moving Earth’s climate system toward a new state very quickly.”
– Kim Cobb

El Niño Southern Oscillation extremes drive changes in global temperature and precipitation patterns every two to seven years. The variations are particularly pronounced in the central tropical Pacific, where Cobb and her team collected the fossil corals used in the study.

Both research projects were supported by the National Science Foundation. The results were published in two separate papers in the prestigious journal Science. For Cobb, they represent an important contribution to understanding the complexity of climate change.

“As a society, we haven’t really thought enough about the fact that we are moving Earth’s climate system toward a new state very quickly,” she said. “It’s important to remember that the climate system has important nonlinearities that are most evident in the abrupt climate events we studied. Ultimately, we’d like to be able to reproduce the global signatures of these abrupt climate events with numerical models of the climate system, and investigate the physics that drive such events.”