This story was originally published in February 2017.

“One of the biggest barriers in suicide prevention is the fear of talking about suicide,” says Lacy Currie, coordinator of Suicide Prevention and Crisis Response at Tech’s Counseling Center. “But the research shows that suicidal individuals benefit from talking about it.”

After crippling bouts of feeling alone with suicidal thoughts triggered by an ongoing battle with panic and anxiety disorder, Stephanie Phillips agrees with the research. A production coordinator in Institute Communications, Phillips recalls being overwhelmed by helplessness and loneliness in her darkest days, which is why she’s now eager to contribute to the discourse surrounding mental health and suicide. She wants others to know what she didn’t initially understand — that opening up about your struggles is the first step in opening the doors to healing.

“One of the biggest barriers in suicide prevention is the fear of talking about suicide, but the research shows that suicidal individuals benefit from talking about it.”

“It meant so much for my therapist to tell me: ‘You can’t help how you’re feeling, and that’s OK.’ That then made it easier for me to trust him and let him suggest things that might help me manage my feelings,” Phillips explains. She said that validation of her feelings and resultant treatment exploration could never have happened had she not decided to simply talk about what she was going through.

“There’s definitely a lack of discussion because, I think, people generally have a hard time talking about emotions and mortality. That’s often why they end up feeling so isolated. As a society, we still have a lot to learn about how to openly talk about how we feel,” says Phillips. “But, I just remember how helpless I felt, and even though everyone’s story is different, I want to open up and share mine if it might help others.” 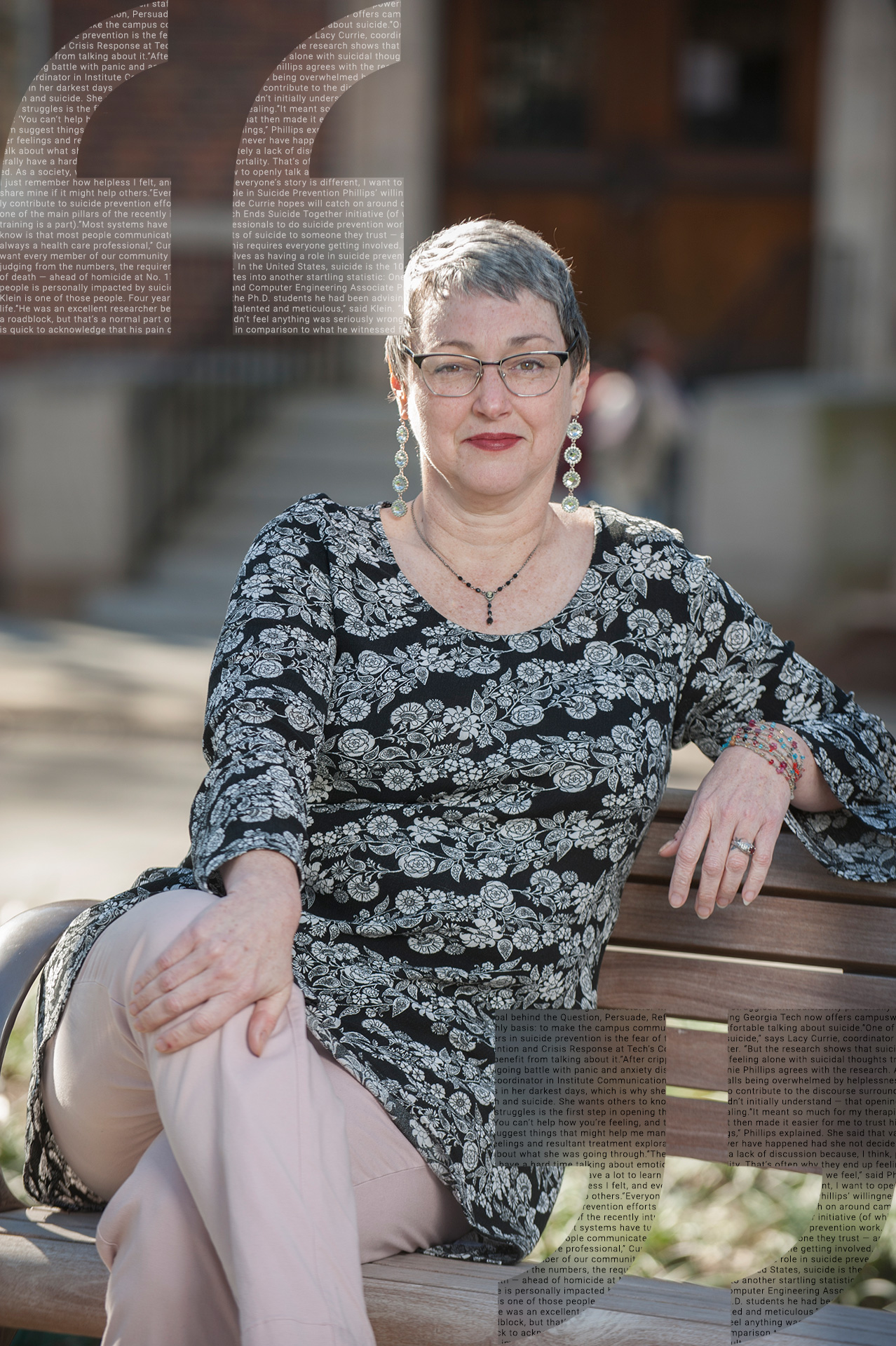 Everyone Has a Role in Suicide Prevention

Phillips’ willingness to actively contribute to suicide prevention efforts is an attitude Currie hopes will catch on around campus and is one of the main pillars of the recently introduced Tech Ends Suicide Together initiative (of which the QPR training is a part).

“Most systems have turned to professionals to do suicide prevention work. But what we know is that most people communicate their thoughts of suicide to someone they trust — and that’s not always a health care professional,” Currie says. “So this requires everyone getting involved. At Tech, we want every member of our community to see themselves as having a role in suicide prevention work.”

“At Tech, we want every member of our community to see themselves as having a role in suicide prevention work.”

And, judging from the numbers, the requirement is urgent.

In the United States, suicide is the 10th leading cause of death — ahead of homicide at No. 17. This translates into another startling statistic: One in every six people is personally impacted by suicide.

Electrical and Computer Engineering Associate Professor Ben Klein is one of those people.

Four years ago, one of the Ph.D. students he had been advising took his life.

“He was an excellent researcher because he was talented and meticulous,” says Klein. “His work had hit a roadblock, but that’s a normal part of research; I didn’t feel anything was seriously wrong.”

And while Klein is quick to acknowledge that his pain certainly pales in comparison to what he witnessed from the student’s immediate family, he still has to work through difficult emotions — even though a few years have passed.

“It has felt like a heavy burden. His suicide has made me reluctant to advise graduate students; I’m afraid of repeating whatever mistakes I may have made with him, particularly since I’m not sure what they were,” Klein says.

On the other hand, teaching classes has been a key coping mechanism for him.

“It’s been important for me to feel needed; to be reminded that I can’t just give up.”

Having intimately experienced the loss of a student, that message of not giving up is one he wants other students to really hear.

“I think most of our students are accustomed to some degree of academic success. But, problems can sneak up. This happens to everyone — even people who appear to have everything figured out. The people in your life want you there regardless of how successful you are in school or research. And even seemingly insurmountable problems tend to be resolved in time. Give yourself the opportunity to see what the next chapter is,” says Klein. 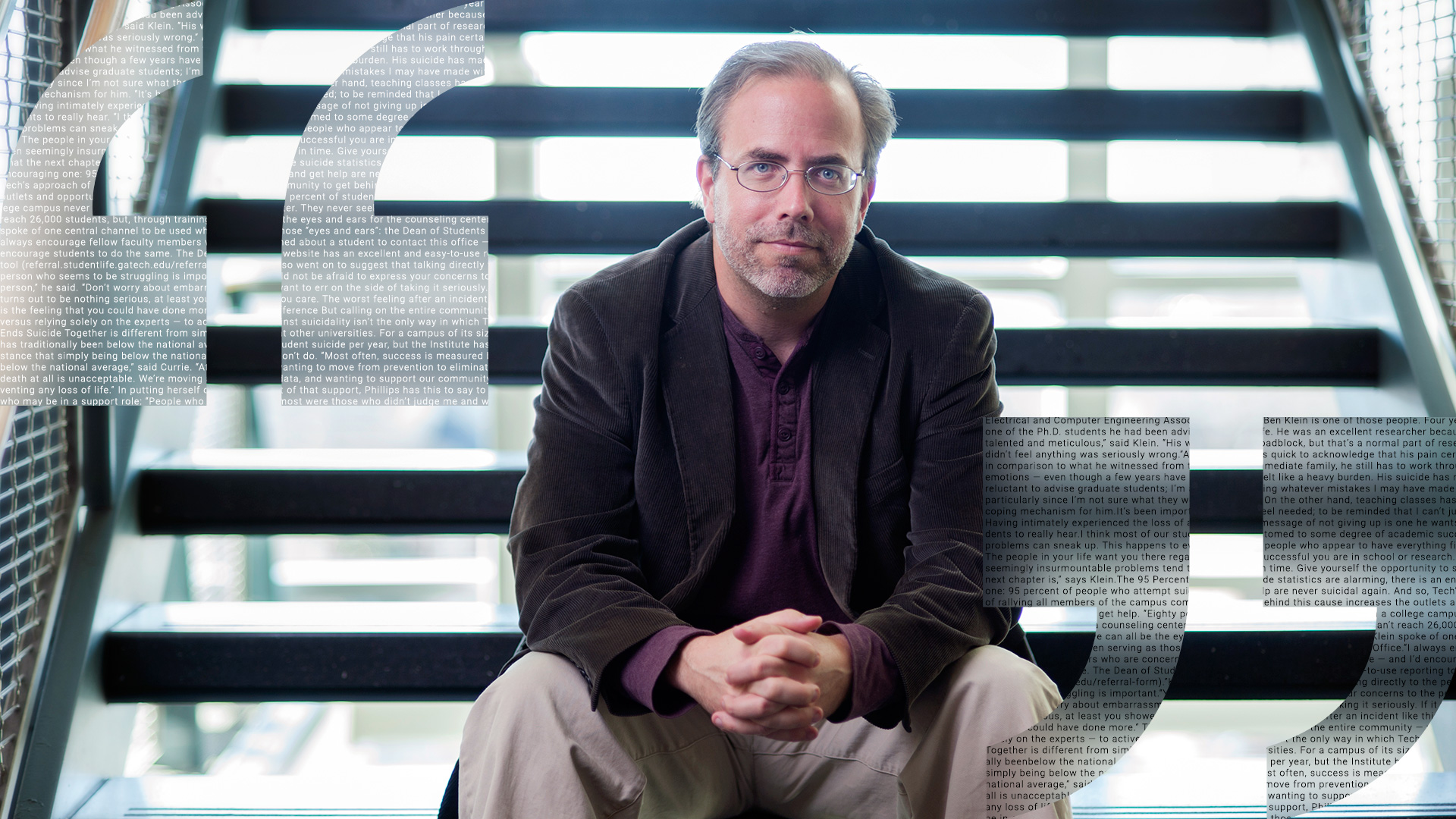 While the suicide statistics are alarming, there is an encouraging one: 95 percent of people who attempt suicide and get help are never suicidal again. And so, Tech’s approach of rallying all members of the campus community to get behind this cause increases the outlets and opportunities for individuals to get help.

“Eighty percent of students who take their life on a college campus never walk into the doors of a counseling center. They never seek help,” says Currie. “I can’t reach 26,000 students, but, through training, we can all be the eyes and ears for the counseling center.”

Klein spoke of one central channel to be used when serving as those “eyes and ears”: the Dean of Students Office.

“The worst feeling after an incident like this is the feeling that you could have done more.”

“I always encourage fellow faculty members who are concerned about a student to contact this office — and I’d encourage students to do the same. The Dean of Students website has an excellent and easy-to-use reporting tool (referral.studentlife.gatech.edu/referral-form).”

Klein also went on to suggest that talking directly to the person who seems to be struggling is important.

“You should not be afraid to express your concerns to the person,” he says. “Don’t worry about embarrassment! You want to err on the side of taking it seriously. If it turns out to be nothing serious, at least you showed that you care. The worst feeling after an incident like this is the feeling that you could have done more.” 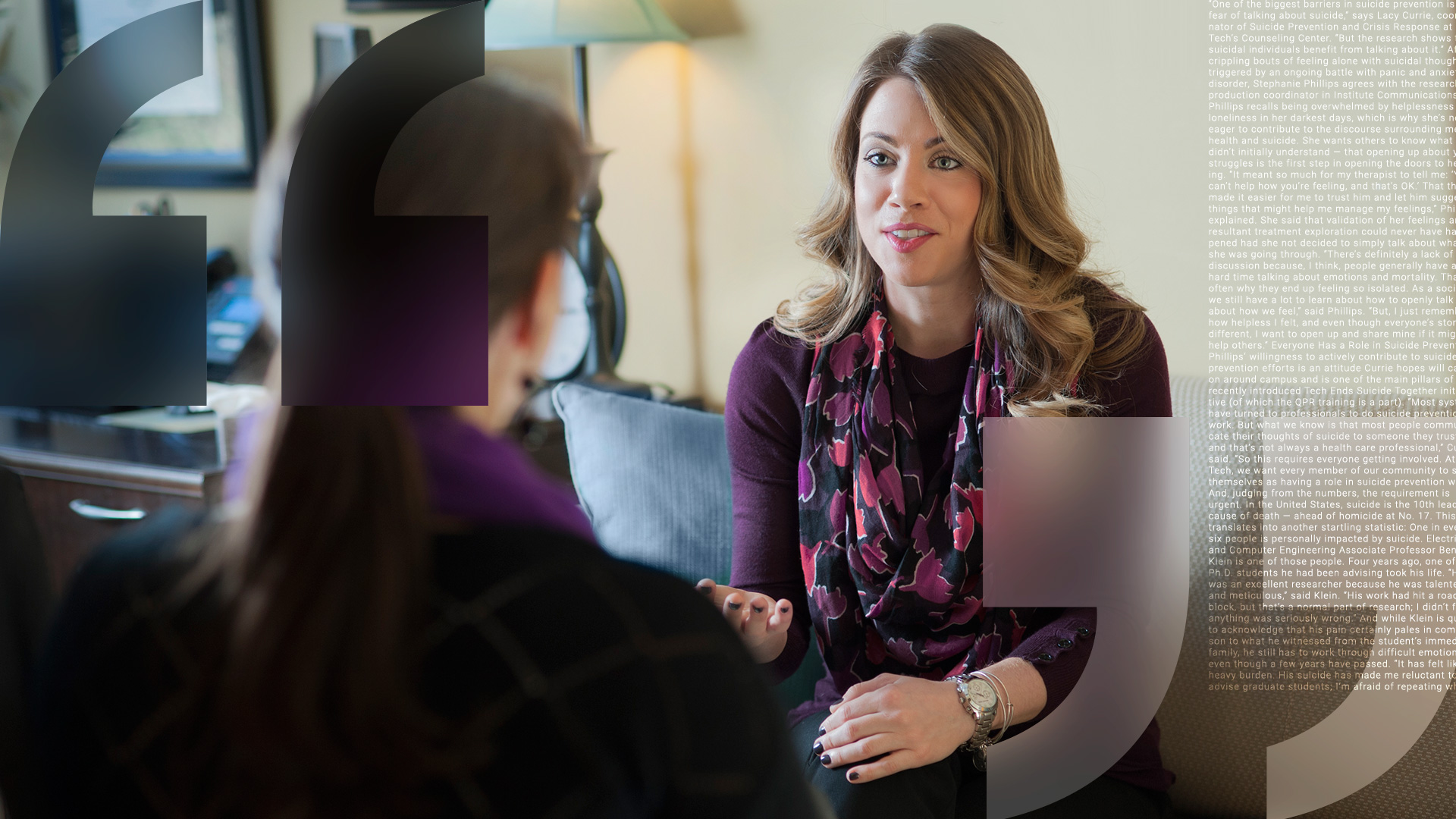 But calling on the entire community — versus relying solely on the experts — to actively work against suicidality isn’t the only way in which Tech Ends Suicide Together is different from similar initiatives at other universities. For a campus of its size, Tech has traditionally been below the national average of one student suicide per year, but the Institute has taken a stance that simply being below the national average just won’t do.

“Most often, success is measured by being below the national average,” says Currie. “At Tech, we are wanting to move from prevention to elimination. Any death at all is unacceptable. We’re moving away from the data, and wanting to support our community in preventing any loss of life.”

“Any death at all is unacceptable. We’re moving away from the data, and wanting to support our community in preventing any loss of life.”

In putting herself out there as part of that support, Phillips has this to say to others who may be in a support role: “People who helped me the most were those who didn’t judge me and were there just to listen. They offered me options and solutions but didn’t present them in a way like I had no choice — because a person like that is already feeling trapped and judged, so it’s important to open doors for them, but they have to make the choice to walk through those doors.”

And for those actually facing the choice of walking through those doors? Phillips wants them to know: “Saying you’re suicidal isn’t a permanent thing about you. It’s stigmatized because it seems like a weakness, but it’s no more so than any other type of sickness that brings you close to death, like cancer. These are things you experience in life, and if you survive it, then you’re a survivor. You can be in this state of mind and come back from it.”