This October marks 10 years since the grand opening of Technology Square. Read how the largest, most transformative infrastructure project in Georgia Tech history turned a once blighted area into a thriving ecosystem for high-tech innovators and entrepreneurs.

“If you build it, they will come.” That line from Field of Dreams could just as easily have applied to Technology Square at its groundbreaking in 2001.

By 2003, on time and within budget, Georgia Tech’s unique complex of academic, retail, and research space was built, and they did come – faculty, students, restaurants, retailers, researchers, industry partners, business incubators and startups. In fact, Tech Square has worked so well, administrators from dozens of other universities have come to take a look, hoping to create a similar infrastructure for their campus.

Today, it’s hard to imagine Georgia Tech without Tech Square. President G.P. “Bud” Peterson never had to. By the time he arrived in 2009, Tech Square was well established – stable, but certainly not static.

“Tech Square is a testament to what is possible when higher education, government, business and the community work together,” Peterson says. “In just 10 years, it has become the place to be for high-tech innovators and entrepreneurs in the Southeast. We have big names and names that someday will be big. This is just the beginning really, with the second phase about to begin.”

The amorphous notion that would take shape as Tech Square began to form in 1996, when Atlanta hosted the Centennial Olympic Games and the Fifth Street Bridge temporarily became the main entrance into campus.

At the time, there was no doubt the campus needed to expand, but in which direction and exactly how had not been determined. Going south would disrupt the revitalized Centennial Place area, going north would unsettle the historic Home Park neighborhood, and there were already plans in the works for new research and academic buildings to the west. Maybe going east on Fifth Street would work after all.

Fifty years earlier, Georgia Tech had been cut off from its one-time neighbor to the east – Midtown Atlanta – by construction of the I-75/85 interstate, a major transportation artery that had grown bigger and bigger until it now stretched 14 lanes wide.

Clearly, bridging the physical gap between Georgia Tech and Midtown Atlanta could also create a bridge to a wealth of opportunities for both communities, and the time to act was now.

Bringing the Vision into Focus

Executive Vice President for Administration and Finance Steve Swant, who came to Georgia Tech in 1996 as associate vice president for Institute Budget and Planning, was just sitting down at the table as talk of the new development began. He credits astute real estate professionals in the trustee ranks of the Georgia Tech Foundation for pointing the Institute in the right direction.

“There were areas on the edges of campus that were marginal, but they also presented opportunities, and the trustees saw that,” he recalls. “The Foundation had the capacity to assist the Institute in acquiring parcels of land, and they assembled what you now see as Technology Square.”

Knowing where the campus would expand would prove a key determinant in how it would expand, although at first, Swant says, the vision was hazy. The only certainty was that the development would include a university “village,” which was high on the wish list of then-President G. Wayne Clough, then-Executive Vice President Bob Thompson, Swant, and other executive leaders.

Meeting by meeting, the key elements fell into place, Swant says. The Georgia Tech Professional Education (GTPE) program, which had been scattered around campus, space permitting, could be housed in a new conference center. This facility would turn out to be the Global Learning Center, whose advanced technology allows GTPE to offer working professionals and industry partners access to the Institute’s expertise through a variety of innovative and flexible educational programs.

And if there’s a conference center, there should probably be a hotel to go with it. To anchor the retail, a bigger, better campus bookstore was proposed.

“And wouldn’t it be great if there was an academic unit over there, preferably one that aligned with the business community?” Swant remembers someone asking. “There went the College of Management!" [Now the Scheller College of Business.]

The early planning process was not without creative tension, Swant recalls, and there was some apprehension, particularly from the business school, which was wary of being banished to uncharted territory.

“That was understandable,” Swant says. “It was a huge change. But once the faculty, dean, and alumni were excited about what the new location and facilities could mean for the college, a lot of resources were raised to fund a good portion of the development.”

Since the move, he points out, the college’s rankings have “spun up nicely,” and it also received a $50 million gift, the largest individual gift in Institute history, from alumnus Ernest Scheller Jr.

“The B-school's move to Tech Square is just a perfect example where thoughtful vision and strong investment led to tremendous outcomes,” Swant says.

Fast forward – past the planning, designing, fundraising, alliance building, and construction – to 2003.

Georgia Tech has developed south of Fifth Street to the tune of $150 million, and on the north side, a private entity has spent $200 million to raise the Centergy One office complex and Tech Square Research Building – the names themselves an invitation to innovators and entrepreneurs.

Infrastructure in place, it was time to bring Georgia Tech’s new “village” alive. It wasn’t enough to have the bookstore and business school as guaranteed draws – the destination had to be convenient and compelling for other students, hotel and conference guests, and tenants, as well.

Rich Steele, now senior director of Auxiliary Services, was responsible for leasing out the restaurants and retail that would create street-level interest on Tech’s side of the street.

It took about a year and a half to reach full occupancy, and Steele expected the inevitable “churn,” but overall, he says, tenants have been stable, generating more than $169 million in sales since 2003. Several of the original operators – Barnes & Noble, Starbucks, Chuck’s Famous, Tin Drum, and Ray Cedar’s – are still going strong, and a Waffle House and Walmart (the world’s smallest!) have been added.

Steele says there’s no revenue goal for Tech Square, but sales figures are nevertheless important. “The emphasis we place on sales is to understand whether or not the community is valuing that service,” he says. “It’s a good indicator of whether people really want something.”

To make getting to Tech Square easy and inviting, a new vintage-look conveyance complete with clanging bell – Tech Trolley – began a continuous run back and forth to main campus.

And in 2006, the Georgia Department of Transportation finished renovations to the Fifth Street Bridge, tripling the width and creating a park-like setting for pedestrians on their way to Tech Square. Interstate? What interstate?

Innovation in Line for a Latte

At Tech Square’s groundbreaking ceremony, then-President Clough characterized the coming development, with its proximity to Georgia Tech students, researchers, and resources, as “a deliberate gathering of the elements we need to create one of the nation’s premier high-tech business centers.”

That’s what happened – although the words used to describe Tech Square have since evolved from “high-tech business center” to “innovation ecosystem.”

Just across a tree-lined plaza, Centergy One is home to Georgia Tech’s Institute for People and Technology, Tennenbaum Institute, GTRI Information and Communications Lab, and Enterprise Innovation Institute (EI2), which oversees the Advanced Technology Development Center (ATDC), recently named by Forbes as one of the “Top 12 Business Incubators Changing the World.”

Also in and around Tech Square are VentureLab, Tech’s center for technology commercialization (ranked No. 2 worldwide by the University Business Incubator Index), and Flashpoint, Tech’s startup accelerator program.

The next big thing on the drawing board for Tech Square is a 600,000 square-foot high-performance computing center, which will serve Tech’s academic research needs as well as modeling and simulation requirements for high-tech industries from biotech to banking.

Ralph de la Vega, president and CEO of AT&T Mobility, says his No. 1 criterion when locating a Foundry facility is to be part of an ecosystem that fosters innovation – to him that means “the intersection of premier education, high technology, and an entrepreneurial mindset.”

“When I saw the startup company incubators at Tech Square, and the entrepreneurs, and the high-quality technical people from Georgia Tech who are driving them, I knew this is where we needed to be,” he says. “In fact, we’re already talking with a startup whose technology could significantly benefit our product offerings.”

“All these people rubbing shoulders in line for a latte – you get these brief serendipitous interactions and introductions that are invaluable to their goals and ambitions,” he says. “That’s definitely been important to the growth and success of the Technology Square innovation ecosystem.” 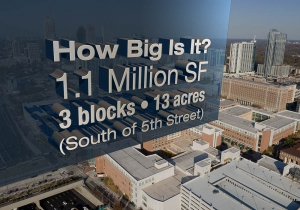 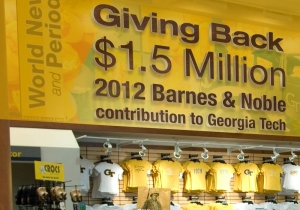 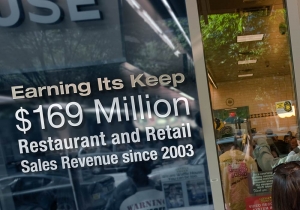 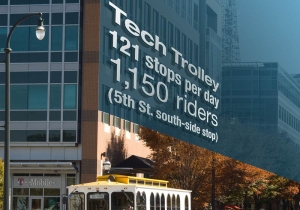 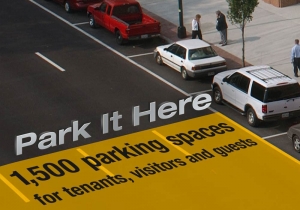 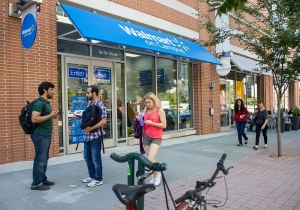 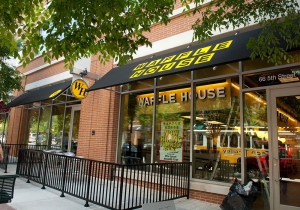 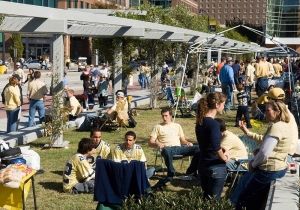 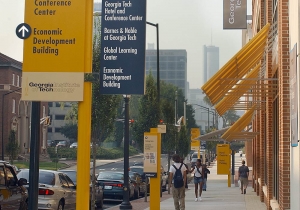 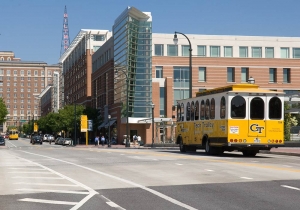 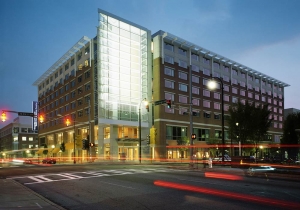 The rendering below depicts the pedestrian-friendly vision for Tech Square as designed by Georgia Tech alumnus Tom Ventulett (Arch 1957), founding partner of tvsdesign, a global architecture firm that designed many of Atlanta's landmark buildings – including the Woodruff Arts Center and the Georgia World Congress Center. 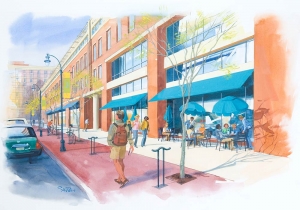 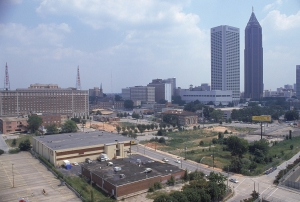 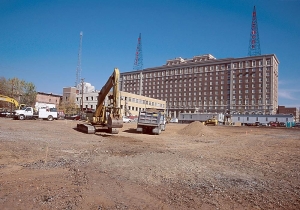 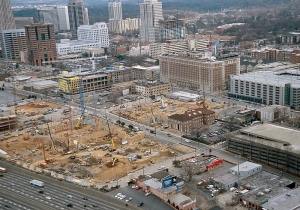 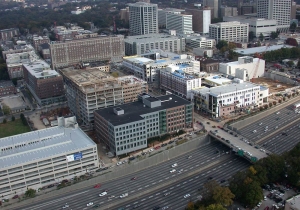 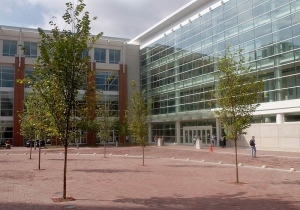 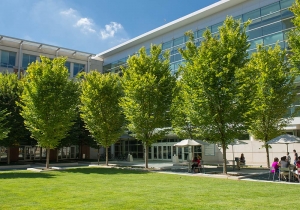 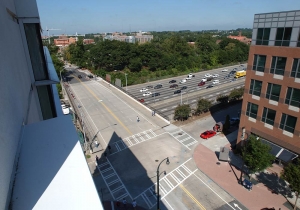 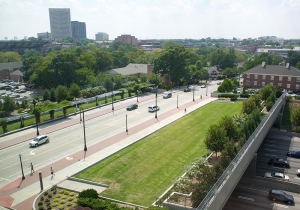