By Victor Rogers | Originally published May 4, 2016

It’s hard to get into Georgia Tech. And, according to many alumni, it’s even harder to get out. So, naturally, Commencement is a big deal, with the Registrar’s Office, Georgia Tech Police Department, Facilities Management, Institute Communications, and a couple hundred volunteers coming together to make the event special for nearly 3,000 students who will graduate this spring.

Robert Simon is one of 200 volunteers who pitch in during Commencement weekend. He has been helping to line up graduates since 2009, when he worked in the Registrar’s Office. Since becoming the graduate program manager in the School of Civil and Environmental Engineering in 2012, he has continued to help with line-up as a volunteer.

“When I was in the Registrar’s Office I knew how much help volunteers gave us, so it was a great way for me to continue helping that office and help the Institute,” he said. “It’s also nice seeing the students on such a special day in their academic careers.”

Kristi Mehaffey, an academic advisor in the Woodruff School of Mechanical Engineering, agrees with Simon.

“I think that advisors naturally want to do this because it is a way to see our students on one of their happiest days,” she said. “Who wouldn’t want to see that?”

Mehaffey said Commencement is one of her favorite parts of her job because she has been working with the students for three, four, five years – sometimes longer – by the time they graduate.

“We finally get to see the culmination of their hard work, long hours of study, and lack of sleep,” she said. “Plus, it is usually the only time that I ever see them dressed up. Commencement is a far cry from the appointments where we see them in baseball hats and workout clothes,” she joked.

She said that Commencement line-up is not hard, just busy. Students are lined up in alphabetical order, by major, within Tech’s six colleges. The most important thing is getting the students to concentrate and find their major, she said.

“They are talking to their friends, calling their family members, and they lose track of what is happening,” said Mehaffey. “I tell my students all the time that if they can earn their degree from here, they can figure out how to line up for Commencement.”

She considers the line-up a success if everyone is in line when the line is pulled to walk through the tunnel of McCamish Pavilion and onto the floor.

Simon, who is helping with the Ph.D. hooding ceremony this year, said that one key to a successful line-up is being patient and staying as calm as possible. 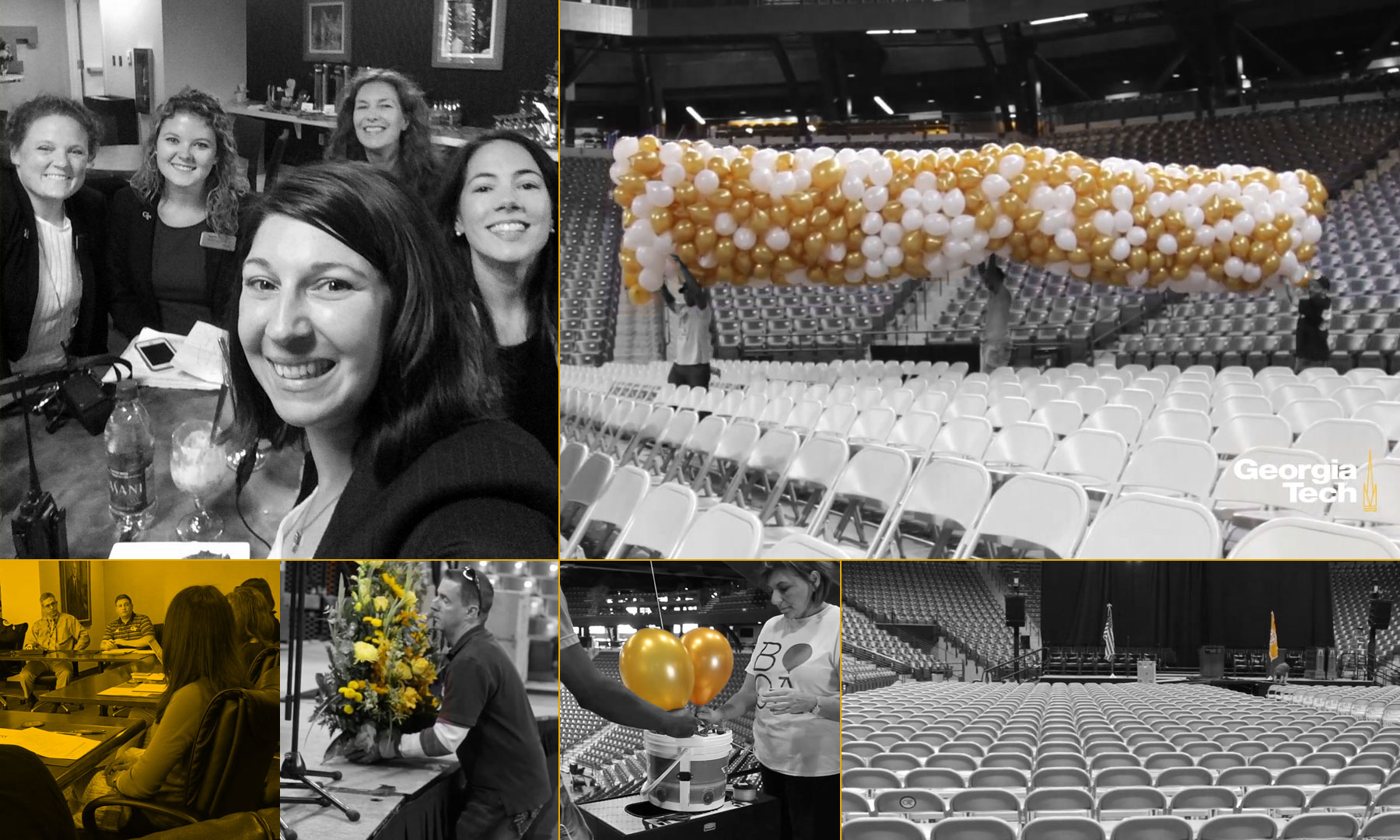 “Whether someone is not in position, or someone is arriving late, or numerous other things, maintaining your composure is critical,” he said. “There’s a lot going on, so the calmer you can stay the more it helps everybody to remain calm. The reality is when you have an event of that scope, with that many people attending, and with that many people helping, things are going to go wrong.”

Simon remembers when something went awry a few years ago, during one of the ceremonies held at the Georgia Dome while McCamish Pavilion was being renovated. He and other volunteers were communicating via radio, and they were waiting for their cue to pull the line of graduates to exit the floor after the ceremony.

Simon remembered, “Our cue was the word ‘pull.’ Apparently that’s the same cue that the balloon person uses to signal when it is time to [pull the string to] release the balloons from the ceiling. So, we hear, over the walkie-talkie – “pull, pull, pull” – so we starting pulling our lines [of graduates to exit], but it was supposed to be just for the balloons!”

At the moment, Simon said the confusion was a little stressful. Now he can laugh about it.

“Fortunately, nobody noticed, and it all worked out,” he said. “But, we did request that the balloon guy use a different code in the future.”

The Readers: What’s in a Name?

At many large universities the names of graduating students are not read individually at Commencement. The graduates simply stand, usually grouped according to their major, and their achievements are acknowledged as a group. But, Georgia Tech takes great pride in reading the name of each graduate aloud.

This is no small feat, and it requires a team of volunteers, including Joe Hughes, to make it happen.

“I think I’ve been doing this for about a decade, although I'm not sure exactly when I started,” said Hughes, professor in the School of Electrical and Computer Engineering. “I got started because each college had to provide a volunteer – actually, Engineering may have had to provide two – and I was asked if I would help.”

To prepare for the big day, Hughes said he may look at the list of names in advance, but he does not try to memorize any of them, not even the long or unusual names.

“Being from Electrical and Computer Engineering, I have the advantage of interacting with a large international student population and routinely encounter many of these names,” said Hughes, explaining his level of comfort with the names. “Students have the option of writing phonetic versions of their names on the cards that are handed to us. So, I take a quick look at the printed name and the phonetic version, if provided, and then announce it.”

Students also have the option of recording the pronunciation of their name into a voice file, and the reader can click on the file to hear how it should be pronounced.

Reading the names happens very quickly, Hughes said, so there isn’t much time to mull over a complicated name.

“In some cases, the phonetic version is more confusing than the printed version, so I just do the best I can,” he said.

Harry Sharp, also a reader, takes a slightly different approach. He practices reading the names right up until show time.

“I get the list and print it, and read the names over and over in my head,” said Sharp, program support coordinator in the H. Milton Stewart School of Industrial and Systems Engineering. “Since my robe’s sleeves are billowy, I stuff the list in my sleeve and walk onto the stage. I sit there and practice reading my names during the ceremony because you only have three seconds for each name.” 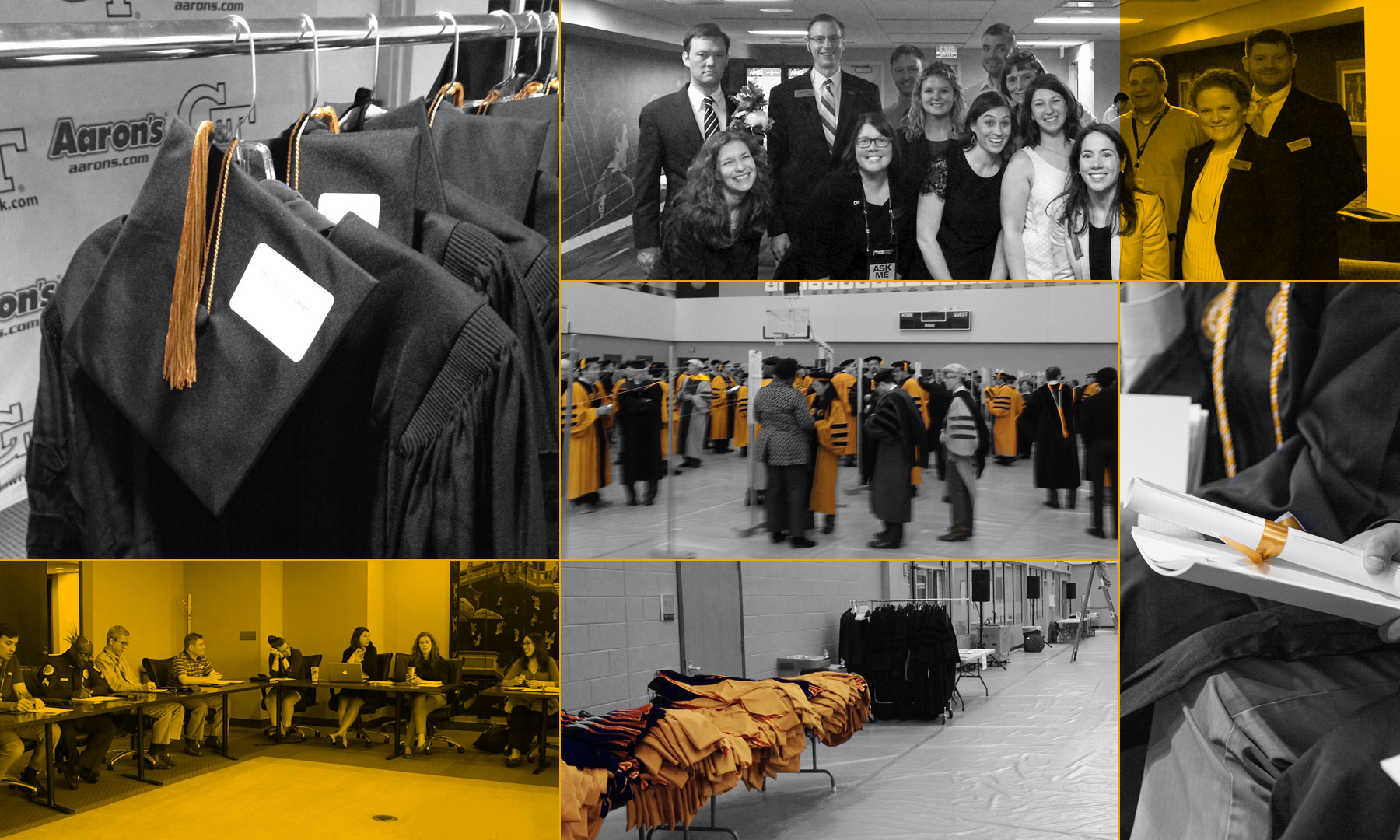 Sharp, who has been a reader since 2010, remembers how the three-second guideline came to be.

“One year when we were having the undergraduate ceremony at the Georgia Dome, President Peterson came over to the group of us who were reading the names and he said, ‘Okay, I’ve done the math. If you take three seconds to read each name instead of four, we will save 20 minutes!’” Sharp said.

Because there is rarely time for do-overs, Sharp tries to get the name right in a single reading.

“I know all of the mistakes that I have made, and 99 percent of the time you just don’t have time to say the name again – especially when you are only in Aerospace Engineering and you have 300 more graduates to come,” Sharp said.

During Commencement last fall, Sharp said he mispronounced one name very badly, but he had a couple of seconds so he said the name again, correctly.

“Sometimes I want to look at the student and say, ‘sorry’, but at that point they’re already halfway across the stage and shaking the president’s hand,” he said.

The readers take pride in playing a role in the graduates’ big event.

“Commencement is an important day in the lives of our students and their families, and my goal is to contribute to a positive experience,” Hughes said.

Over the years Hughes has announced the names of a few students that he knew before they came to Georgia Tech. In one case he had known the family since before the graduating student was born.

“I made sure that I would be the one announcing his major, but I didn't tell him or his family,” Hughes said. “Afterward, they told me how special that moment was for them because it added a unique personal touch to graduation.” 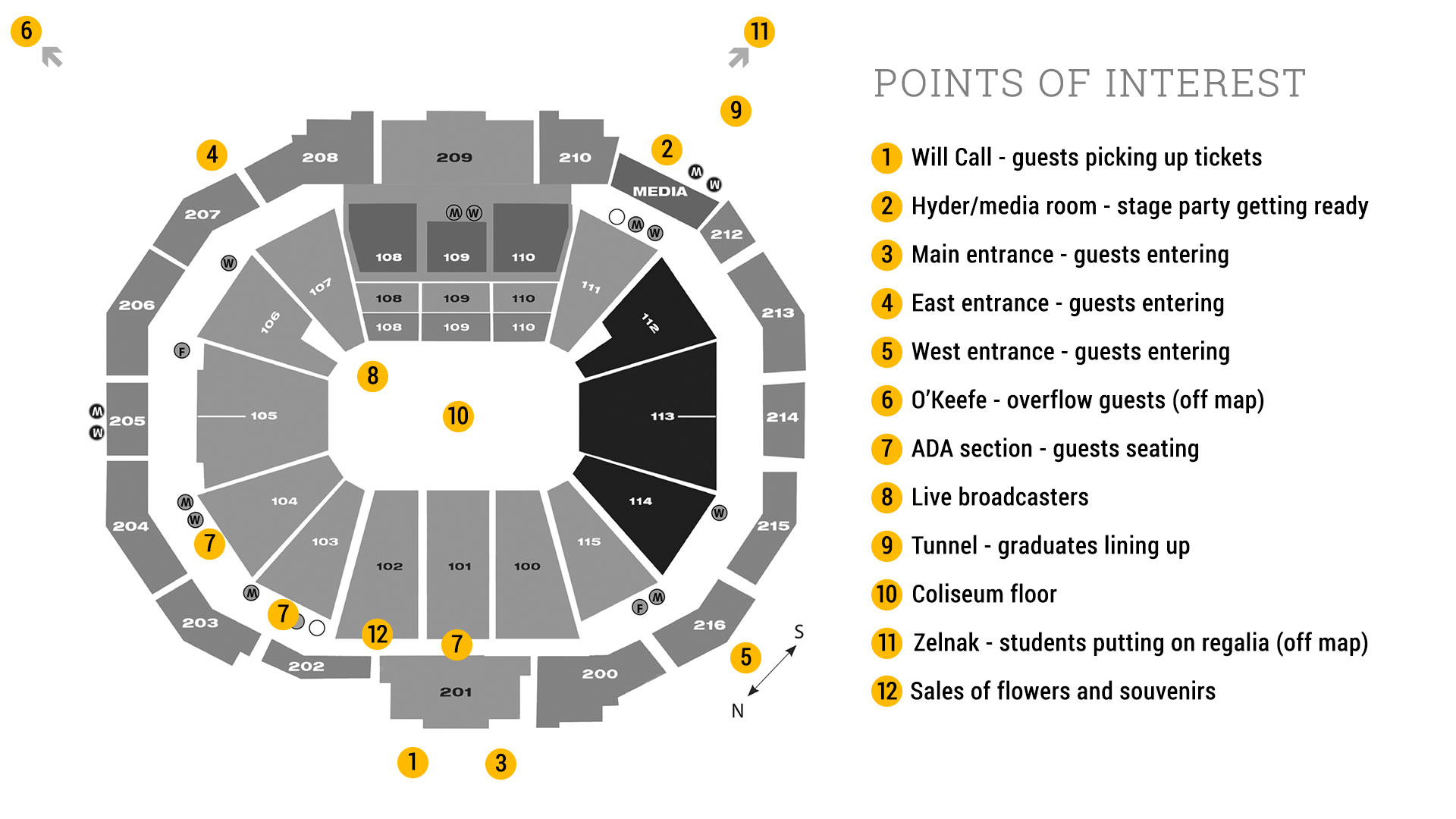 The Registrar’s Office lines up the graduates in alphabetical order, by major (from newest to oldest major), within Tech’s six colleges (from newest to oldest college). The College of Computing is first because it is the newest. The oldest college is the College of Engineering, so it’s always last. As the oldest major on campus, Mechanical Engineering graduates are last.