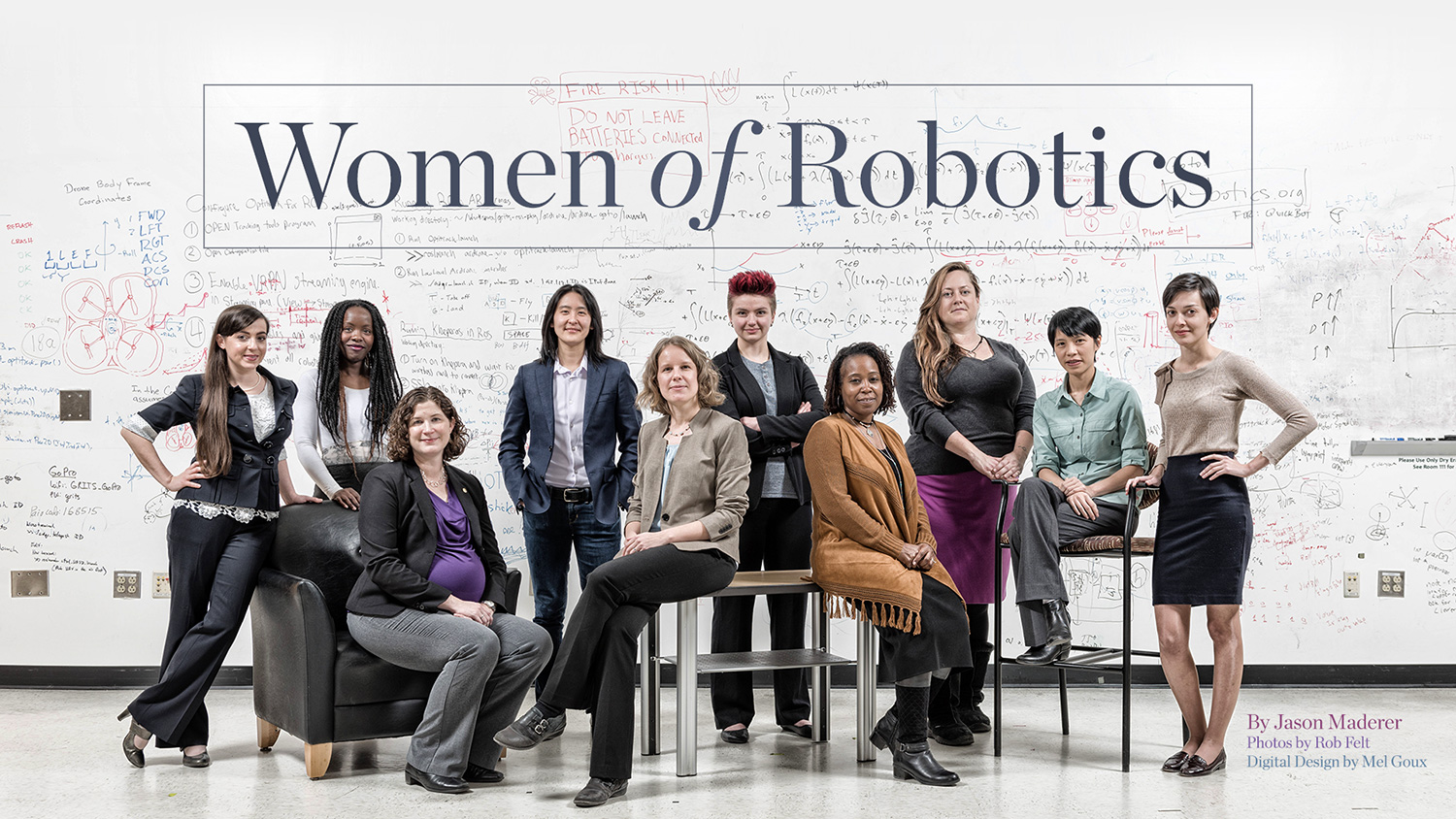 Although she’s only in her mid-40s, Ayanna Howard is the nation’s most senior African-American female roboticist in higher education. It’s another example of the lack of women in the field.

“It always surprises me,” said Howard, the Linda J. and Mark C. Smith Chair Professor in the School of Electrical and Computer Engineering and chair of the School of Interactive Computing. “The medical and biomedical fields are just as technical as robotics, but they don’t have as major of a gender gap.”

The good news? While nationwide numbers for robotics aren’t available, the number of women earning undergraduate degrees in computer science is increasing. It was nearly 14 percent in 2009. It approached 16 percent as of 2015. This past fall, 23 percent of Georgia Tech’s computer science students were women.

Does diversity in robotics truly matter? Howard and her female colleagues are quick to say yes.

“If robots are truly being built so everyone can use them, how can roboticists figure out what’s needed for half the population if women aren’t represented very well in the design process?” Howard asked. “Our field must be reflective of the consumer market.”

In a world dominated by men, here are 10 Georgia Tech women changing the field of robotics. 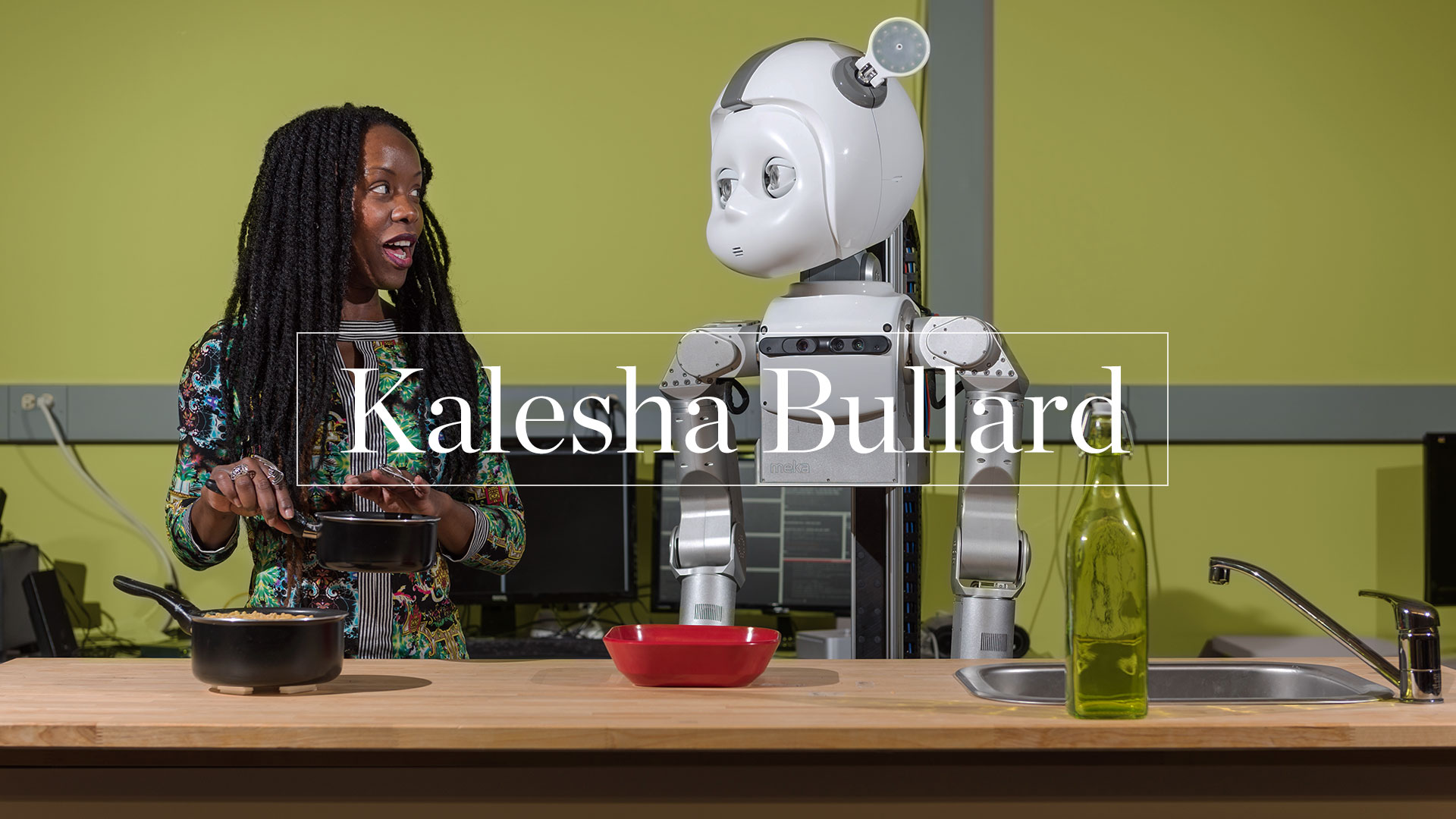 Kalesha Bullard was teaching math as part of Teach for America when a summer research program introduced her to computer science. It changed her career path and eventually brought her to Tech. Now Bullard teaches only one student: Curi, a talking robot. The more it asks, the more it learns.

“I used to focus on how to motivate and engage high school students to help them learn. Now I’m teaching a robot how to be an active learner in order to achieve learning goals. Ultimately, I’d like to put a robot in a classroom — a robotic teaching assistant that learns from the human teacher and uses that information to help instruct and engage students.” 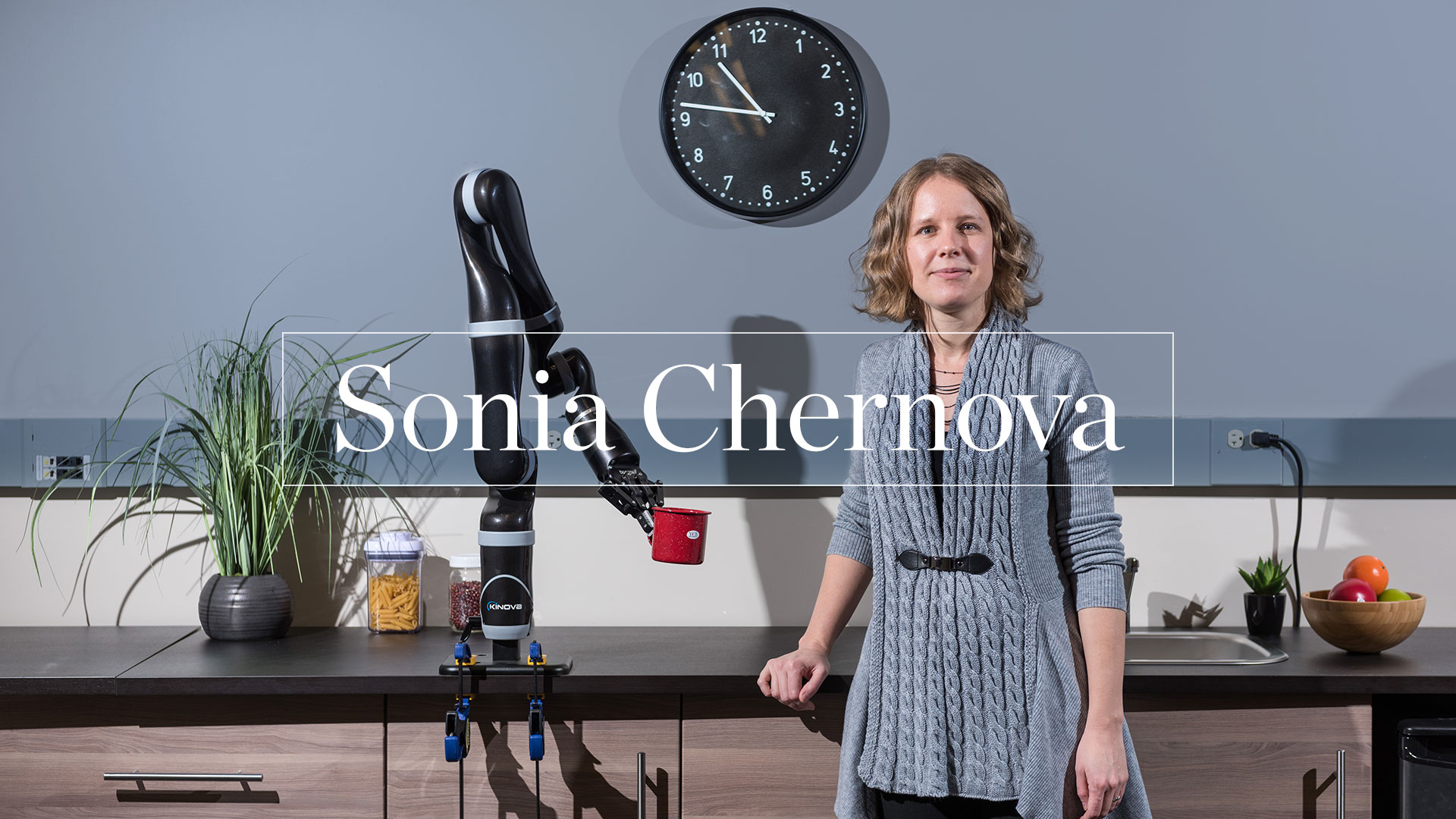 Common sense and situated knowledge — these are what drive people to reach for a drawer when looking for a fork, and reach for the right drawer when in a familiar kitchen. Learning and reasoning about such information is common for people, but not for robots. Sonia Chernova’s research seeks to give machines common sense as well. It’s impossible to pre-program a robot helper with all the knowledge it needs; our world is too diverse, our houses too different. So Chernova is finding ways for robots to learn this information, and to share it with each other.

“What if robots could share information? ‘In my kitchen, we put cutlery in a drawer next to the sink. What about yours?’ If they could pass along knowledge, every robot wouldn’t have to learn from scratch, helping to one day enable robots to perform useful tasks even in new environments. Parents raise children. We need to make sure they don’t have to raise robots too.” 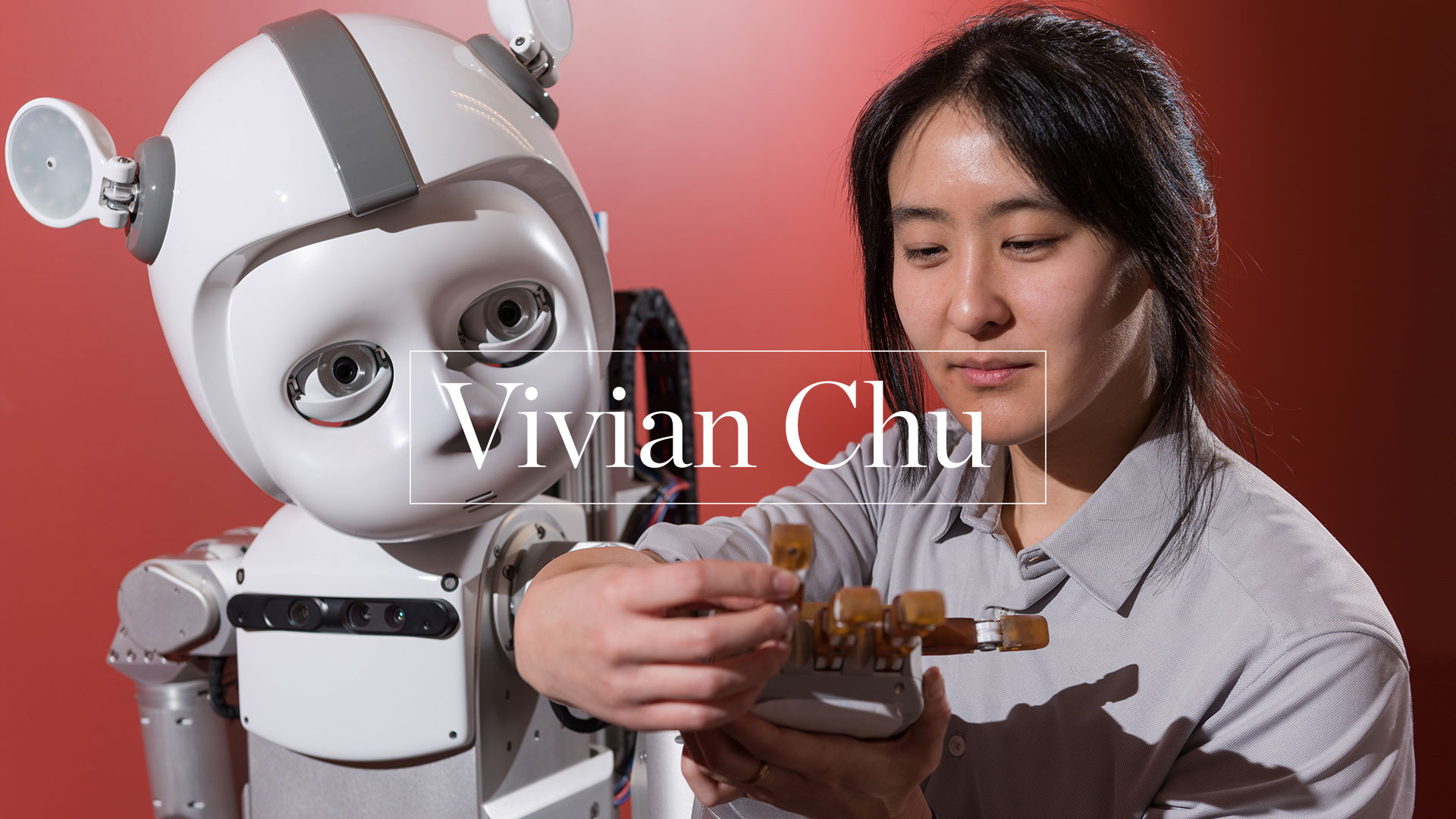 Vivian Chu had no plans to get a Ph.D. when she went to work for IBM in 2009. She didn’t think she was smart enough, but everyone in her research lab insisted otherwise, and now she’s in her fourth year at Tech. Chu teaches robots basic concepts — such as the fact that cups hold liquid and boxes can be lifted — that enable them to complete complex tasks.

“When people find out I work with robots, they always say, ‘You’re so smart. I could never do that.’ That’s one of my pet peeves. ‘NO. NO. NO! YES, YOU COULD!’ I’m not a genius. But I’ve learned that if you work hard at something, you could do this too.” 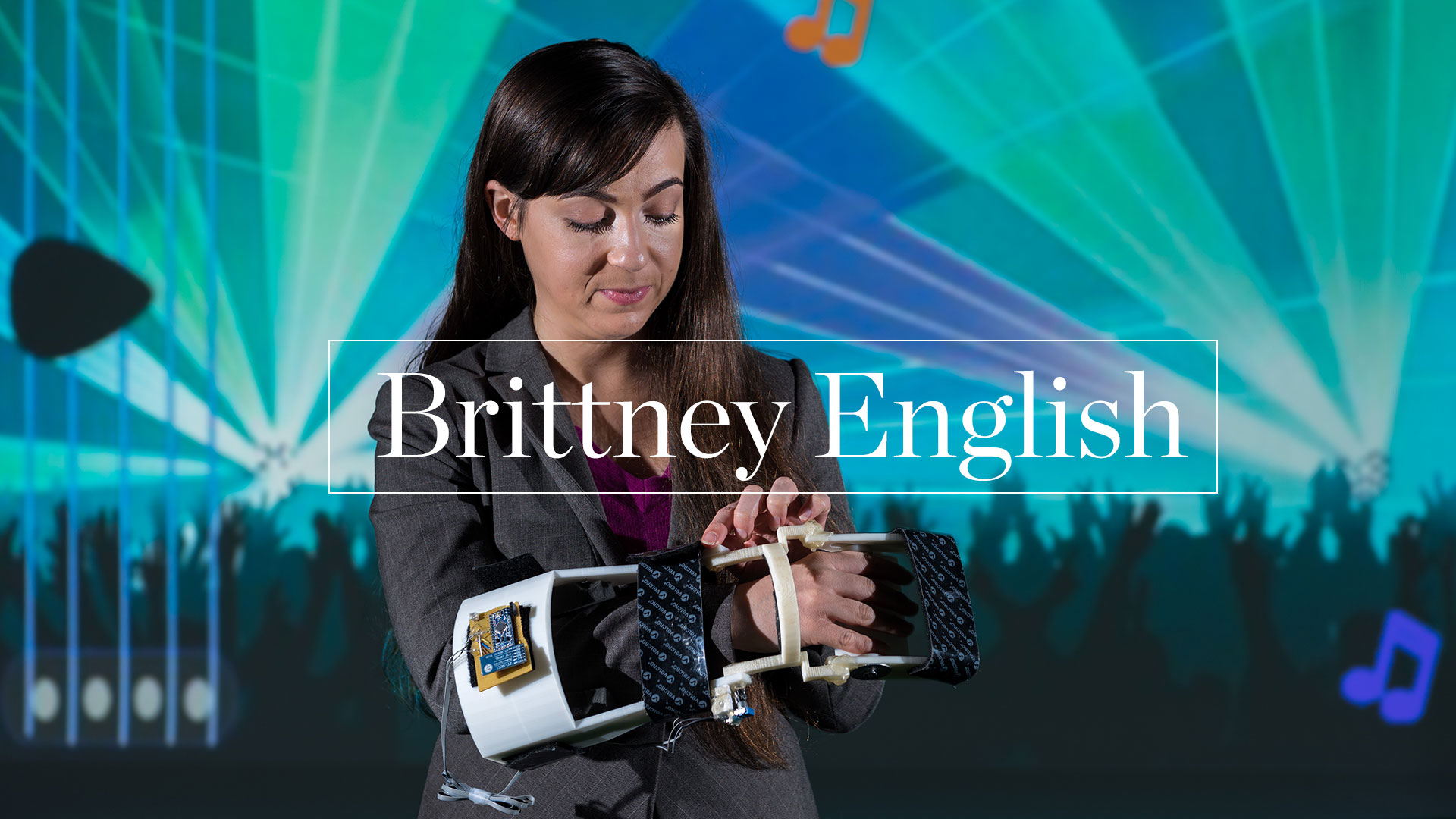 Brittney English loves playing video games but doesn’t get to do it very often. She’s too busy designing them. Her games, and her custom-built exoskeletons that control them, are for stroke survivors with partial paralysis. The arm and wrist movements are the same ones used during the patients’ tedious, monotonous rehabilitation.

“Most people struggle with motivation while rehabbing at home. Doing the same exercises by playing games is much more enjoyable, and we can look at their scores to see if they’re doing it correctly. It’s one way to return some normalcy and fun to their lives.” 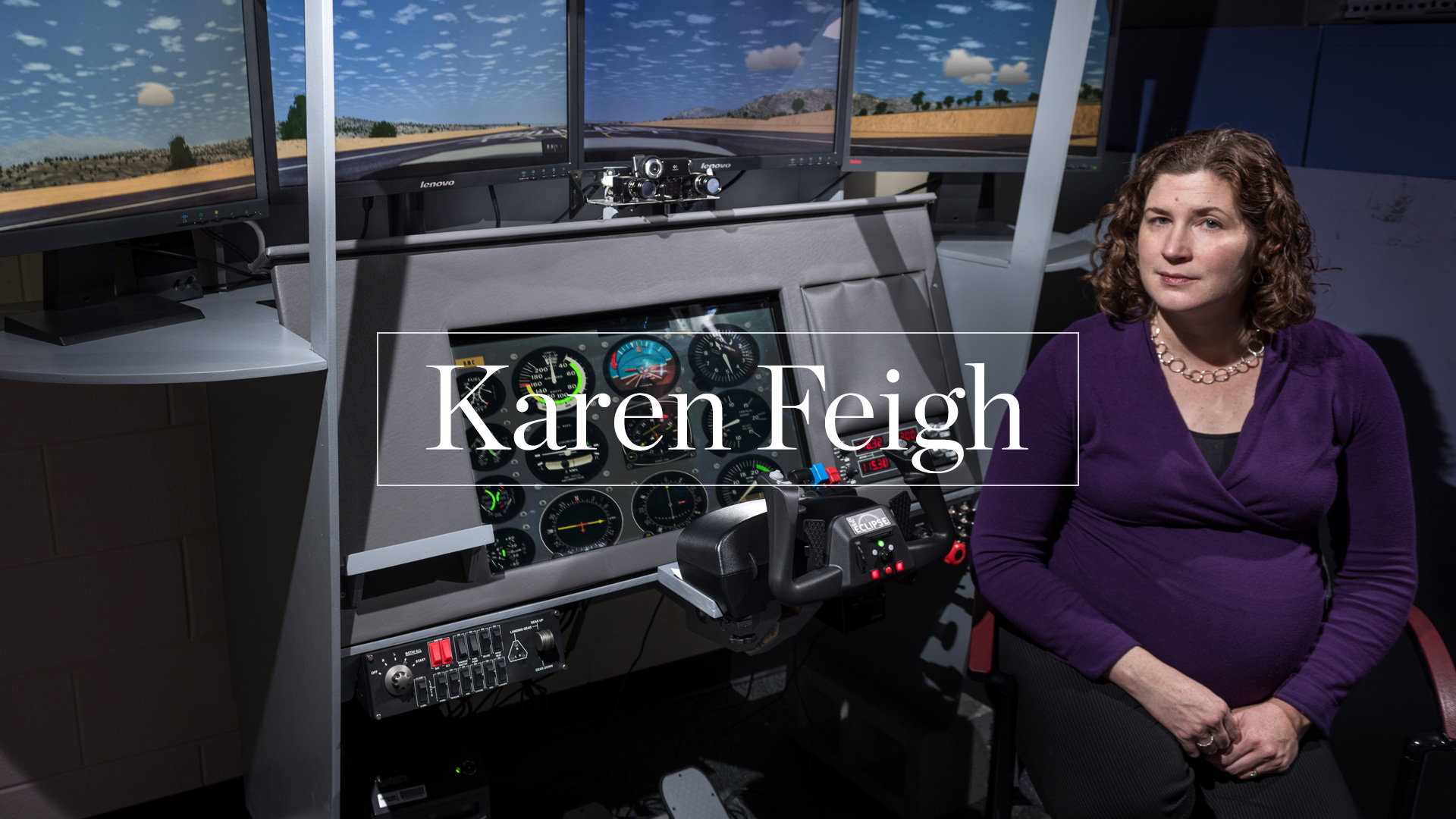 Associate professor in the Daniel Guggenheim School of Aerospace Engineering

Cars will soon drive themselves on our highways. It will present new challenges for professors such as Karen Feigh. She designs computer algorithms and interfaces that allow autonomous vehicles to adjust to human preferences in ways that make drivers feel both safe and comfortable.

“Future cars will operate much more similarly to today’s commercial airplanes. The human driver won’t turn a steering wheel, change gears, or push brake pedals. Instead they’ll tell the car where to go and it will drive them. Between now and then, we will have cars that automate some functions – like maintaining distance from cars in front of them or maintaining location in a lane. These capabilities could improve safety, but often drivers feel uncomfortable using them because the car stops, accelerates, and keeps distances differently from what the driver is comfortable with." 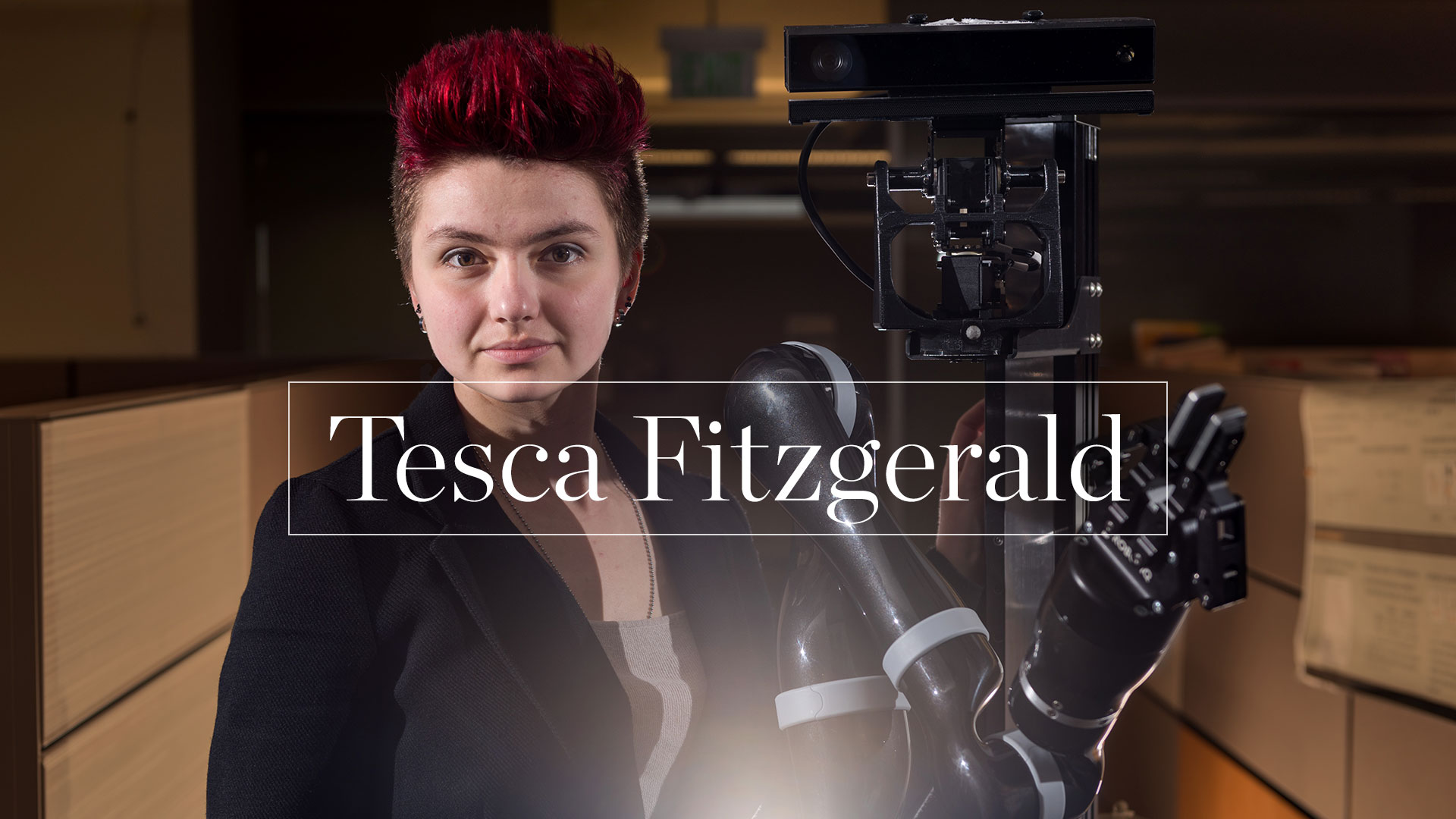 What does a robot do once it learns something? That’s the question that guides Tesca Fitzgerald’s research. After she moves her robot's arm to teach it a task, the machine records what it sees and uses the information to solve related tasks in the future.

“Robots are very good at doing specific things, but why should they use their brains to only do those tasks? People learn throughout our entire lives and build upon those experiences. Robots should do the same thing. They need to be dynamic — adjusting to problems and situations they’ve never seen before.” 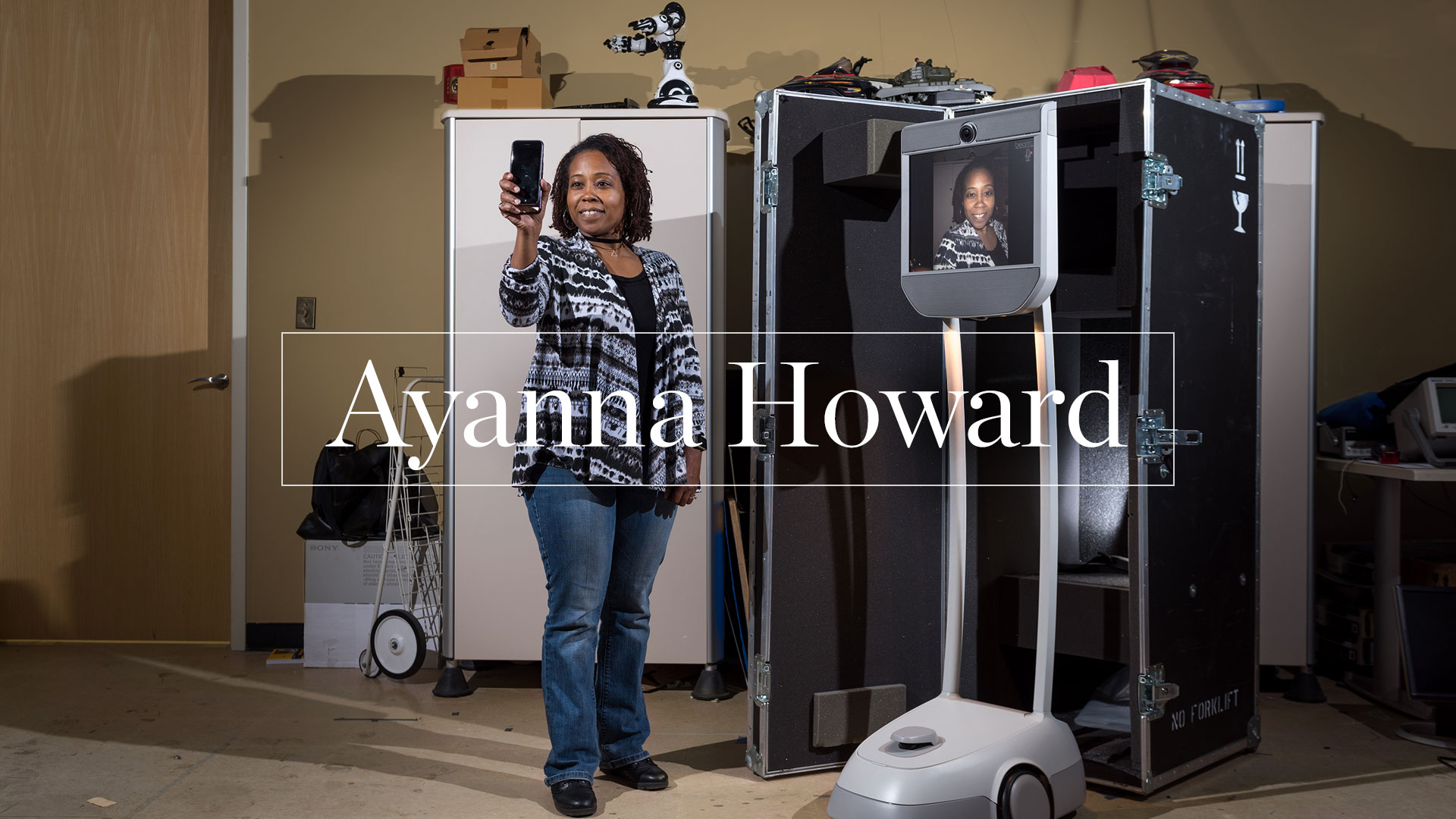 Linda J. and Mark C. Smith Chair Professor in the School of Electrical and Computer Engineering

Ayanna Howard has overseen nearly 50 projects in a dozen years at Tech. Her machines have taught children with autism to play Angry Birds and climbed through sand to replicate Martian exploration. Her next initiative will give personalities to telepresence robots. As one of the nation’s most recognized female roboticists, Howard is always searching for the next project with the potential to make a significant social impact.

“I’m always looking for a problem in need of a solution, then seeing if a robot can provide it. That often brings me to health care. It’s tough, because you have to prove that your solution isn’t just a fun gadget before it can be adopted. What’s success to me? When our robots are used by patients, then I know we have a great project." 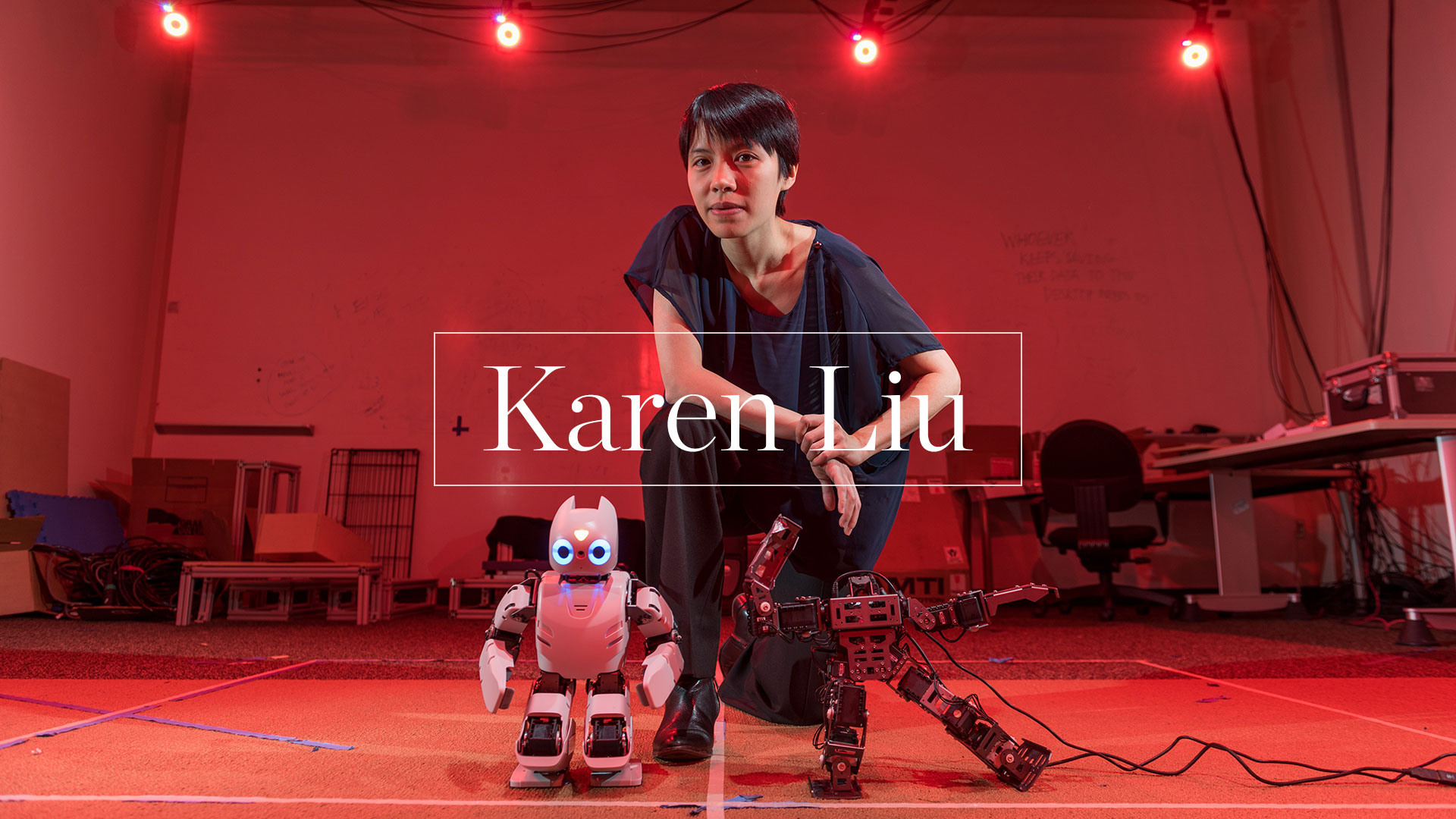 Associate professor in the School of Interactive Computing

Karen Liu isn’t afraid to watch her expensive machines topple on their heads when they’re pushed by her graduate students. Before robots can quickly walk or run in uncontrolled environments, they must first learn to fall. A lot.

“Even with the hardware constraints, there’s a lot of things we can do at the algorithmic level to improve the agility of robots. The most exciting part of my job is the freedom to continuously learn new things with my students. I see myself as a student trying to make sense in this mostly uncharted domain. No one is an expert. We’re all learning together.” 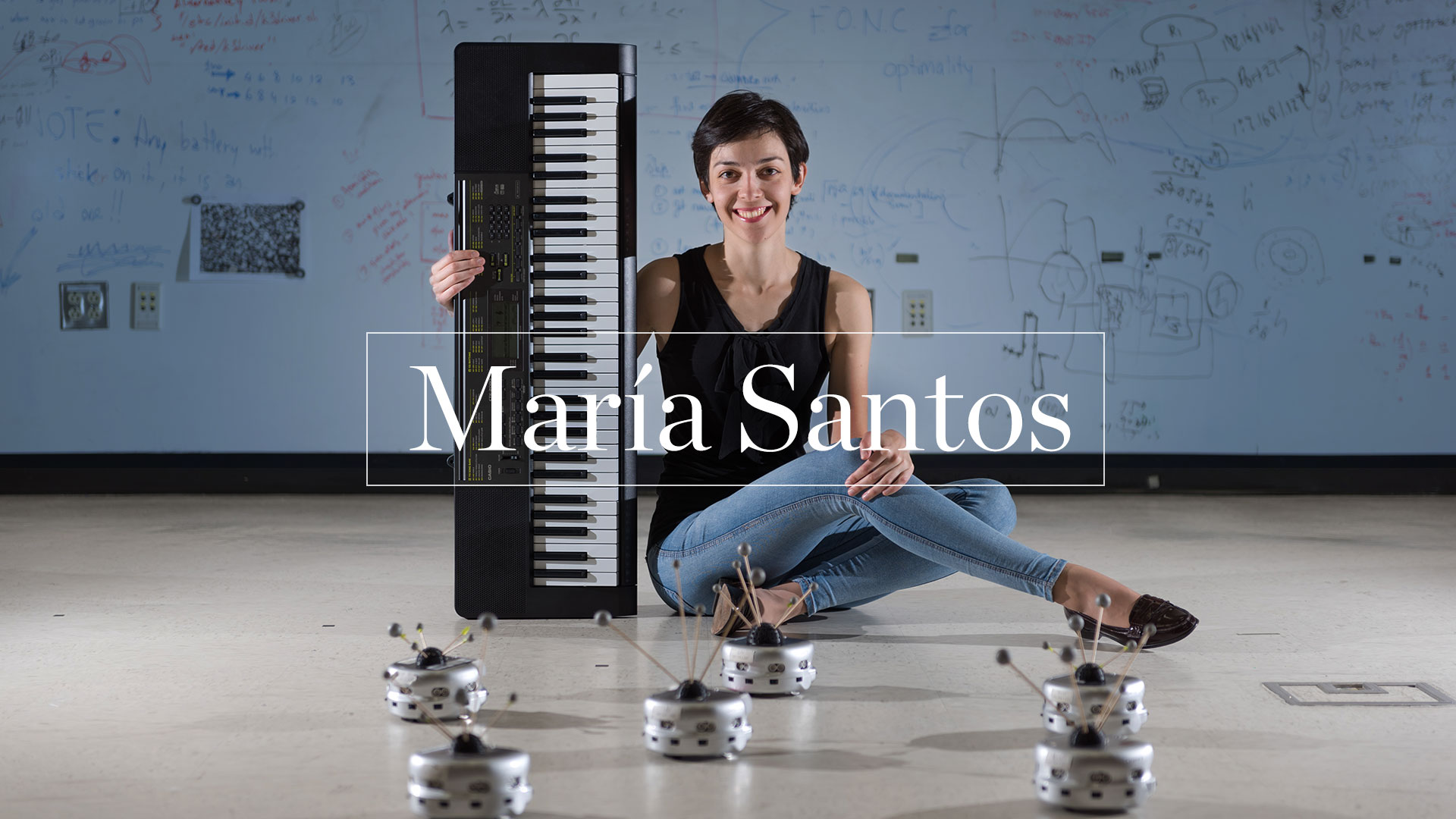 María Santos received a professional music degree in violin while growing up in Spain, but had to sacrifice her music training to pursue her undergraduate engineering degree at the Universidade de Vigo. Now she's found a way to do both. Santos controls swarms of robots while playing the piano, directing them by interpreting the harmonic properties associated with the different chords.

“People are very reluctant to mix robotics with the arts in my home country. But then I came here and saw people inspired by both fields. Georgia Tech has allowed me to combine the two things I love. I never thought I would have this chance — it’s truly a dream come true.” 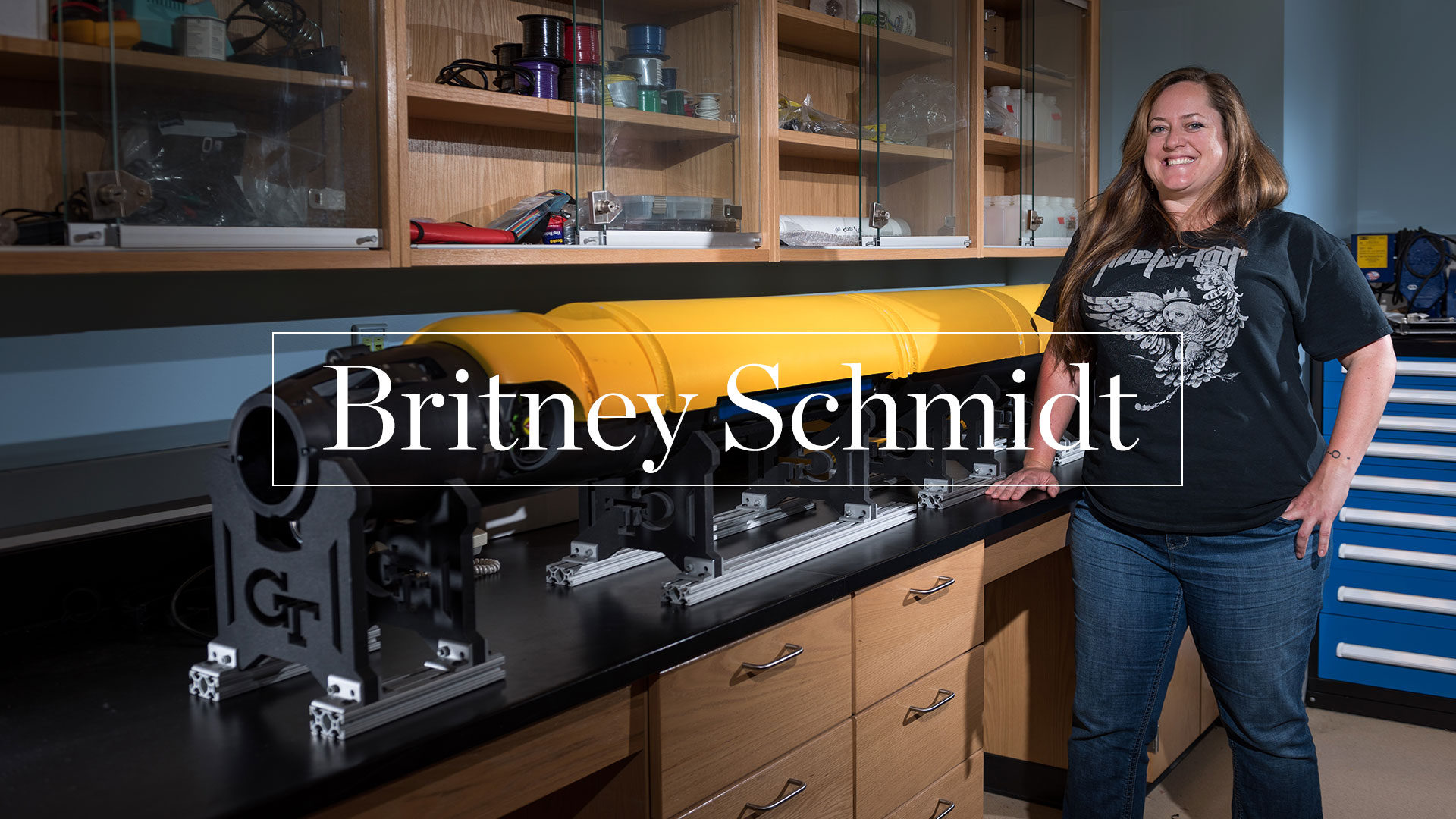 Assistant professor in the School of Earth and Atmospheric Sciences

Maybe it’s surprising to find a roboticist in Earth and Atmospheric Sciences, but some of the foremost questions in climate and planetary science need robots to answer them. Britney Schmidt is looking for life beyond Earth, focusing on Jupiter's ice-covered ocean moon, Europa. She and her group build and test robots in Antarctica to one day swim under Europa's ice.

"We were driving cars for 100 years before we sent rovers to Mars. That's why we are building underwater and under-ice vehicles and going to the most remote, least understood areas under ice on Earth. We've got to push the science and boundaries here first."