On Saturday mornings in the fall, when Georgia Tech plays a home football game, you can find Barrett Ahlers at the Tech Square Waffle House enjoying a waffle and cherry Sprite.

When he’s finished, he’ll exit onto Fifth Street and get in his car – well, the car he’s been entrusted to drive for the 2013 calendar year. Ahlers holds the keys to one of the most iconic cars and mascots in the country.

“I’m just a regular student who happens to have one of the most visible jobs in college football,” said Ahlers, a civil engineering major and driver of the Ramblin’ Wreck. 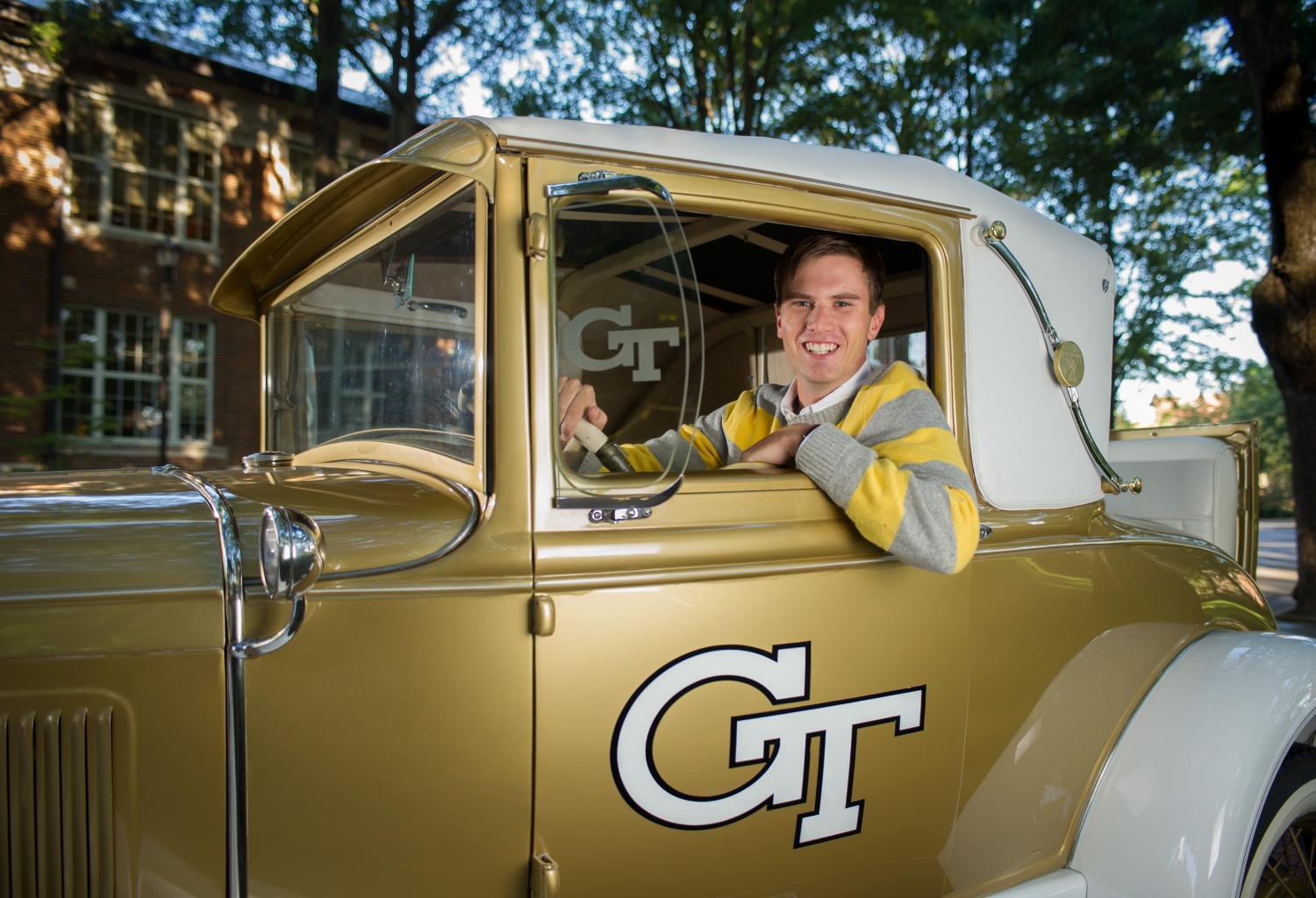 Though he grew up a Tech fan, Ahlers didn’t come to campus expecting to end up behind the wheel of the Wreck. But after spending a few years in the Ramblin’ Reck Club, an organization committed to the education and promotion of Tech spirit, history, and tradition, it became something he had to do.

“I almost didn’t want to do it, but I didn’t want anyone else to do it,” he said. “I wanted the ball in my hands at the end of the game, so to speak.”

It’s a job that doesn’t come with formal training — though there are a few manuals in the garage — but requires careful attention to detail and learning from those who came before you.

Of course, since taking the wheel in January, he’s fallen in love with the job. One of the Reck Club’s responsibilities is to maintain the 1930 Ford Model A Sport coupe, and Ahlers has the leading role. He spends about 10-12 hours a week maintaining and driving Tech’s beloved mechanical mascot: driving it, washing it, repairing it, changing its oil, and caring for its transport to away games and other appearances.

“The number one rule is don’t break anything,” he said. “And if [head football coach] Paul Johnson tells you to go, you go.”

Duties of the Driver

For Ahlers, game day duties start the day before, when he and other Reck Club members gather to wash the car and paint the banner it will bust through onto the field the next day. Country music plays from a stereo inside the garage, where Ahlers is armed with a hose, cleaning supplies, and shammy cloths. He bounces ideas for future banners off those wielding paintbrushes.

“I’ve got an idea for Syracuse: ‘There’s no exCUSE for how bad y’all are.’”

He’s shot down. “It’s a little wordy,” someone says. Perhaps copywriting’s not in Ahlers’ future. He returns to what he does best — tending to the Wreck.

Ahlers has been highlighted in other media this football season, including the Technique and Atlanta Journal-Constitution, but isn’t wholly comfortable being in the spotlight. He’d rather the attention be on the car.

The job has its perks — being a mobile bearer of Tech spirit, manning the Wreck’s infamous “aaaooogaaa” horn — but doesn’t come without its stressors. Ahlers most worries about whether anyone is on the other side of the banner he drives through each time he leads the team onto Grant Field.

“It’s kind of a feeling of terror,” he said. “I most worry about people or a cameraman being back there.”

Once he’s made it out of the tunnel, he laps the field and takes his spot in the southwest corner of the stadium, where he’ll stay for the remainder of the game.

“There’s not really a better place to watch the game than next to the Wreck and on the field.”

Though Saturdays in Bobby Dodd Stadium are where most fans interact with the Wreck, it’s not where the Wreck spends most of its time. In addition to away games, other sporting events, and on-campus events, the Wreck makes appearances by request at weddings, parties, and other special occasions. 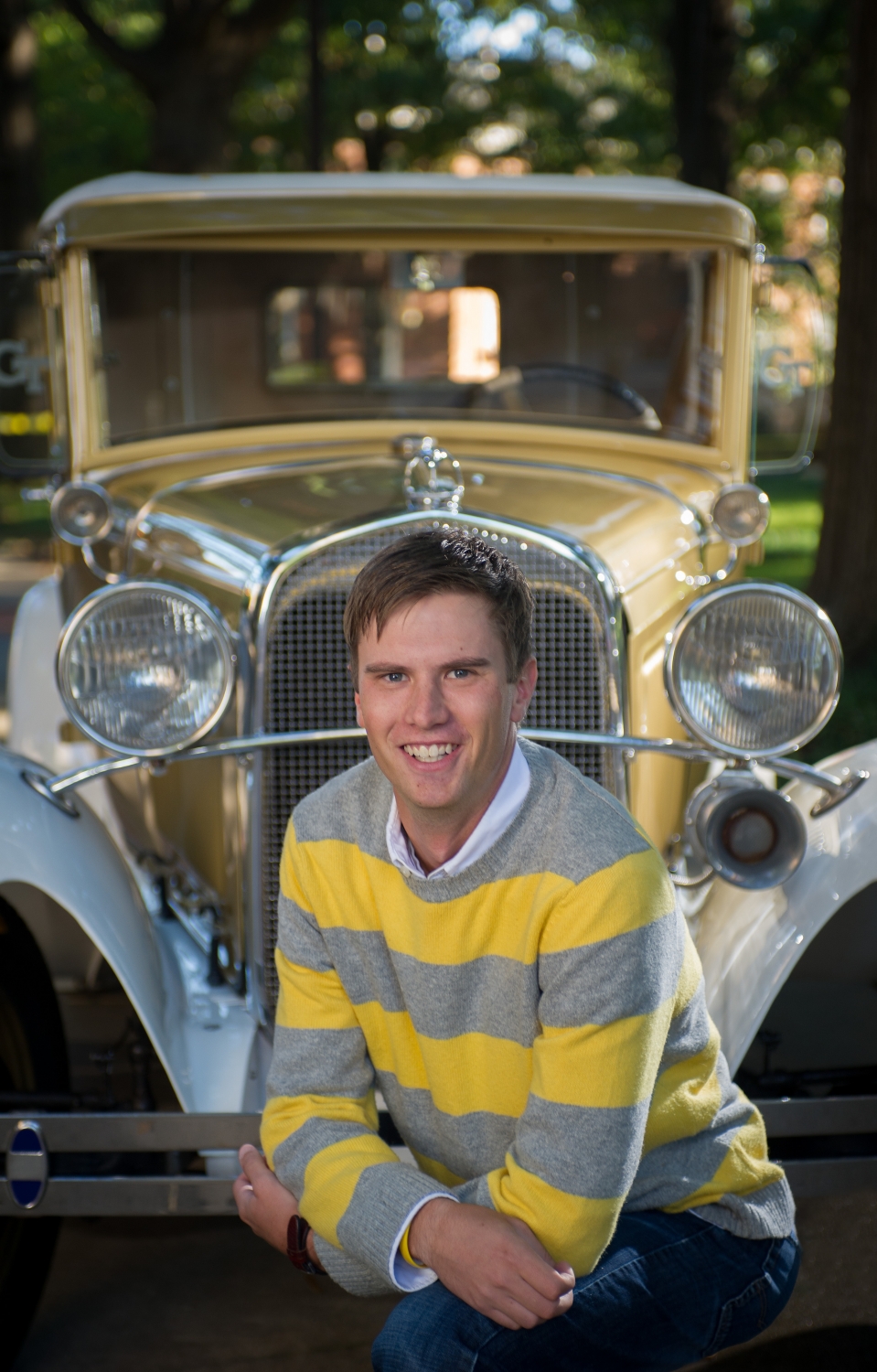 Reck Club holds elections for all executive board positions at the end of each calendar year, one of which is the role of driver. As Ahlers’ tenure approaches its end, he is starting to talk, albeit hesitantly, with those interested in taking over in 2014.

“I’m feeling kind of selfish,” he said. “I kind of want to be alone with the car and don’t want to share it.”

Ahlers will graduate in May, giving him a semester to unwind from the driver’s seat and prepare for his next move — ideally working in transportation infrastructure. (Part of what he enjoys about washing the Wreck before game days is seeing the big rigs go by toting the visiting team.)

But first, he’ll take in his last two months as driver and continue to keep the Wreck running for whoever’s next in line in the “fraternity of drivers.” Like any worthwhile endeavor, the driver gets out of the experience as much as he puts in. As Ahlers puts it, “If you take care of the Wreck, it will take care of you.”

Editor's Note: The Ramblin' Reck Club has used the spelling "reck" since the club first originated in 1945. However, the Institute uses "Ramblin' Wreck" and holds a trademark on this spelling. Either way, it's not "Rambling," but "Ramblin'."

Working on the Wreck

Barrett Ahlers spends around 10-12 hours per week working on the Ramblin' Wreck, washing, making repairs, or driving it to various appearances and events. 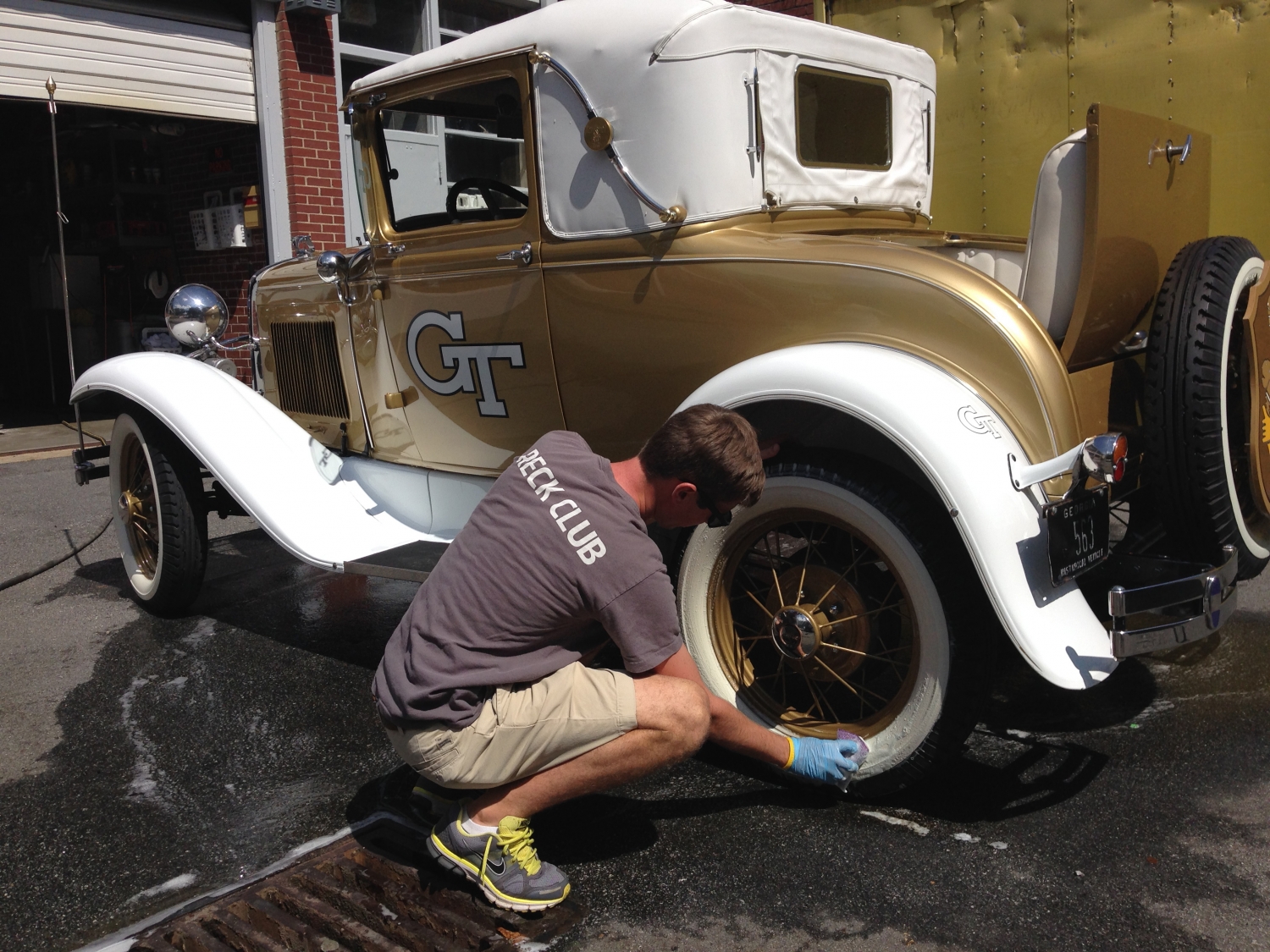 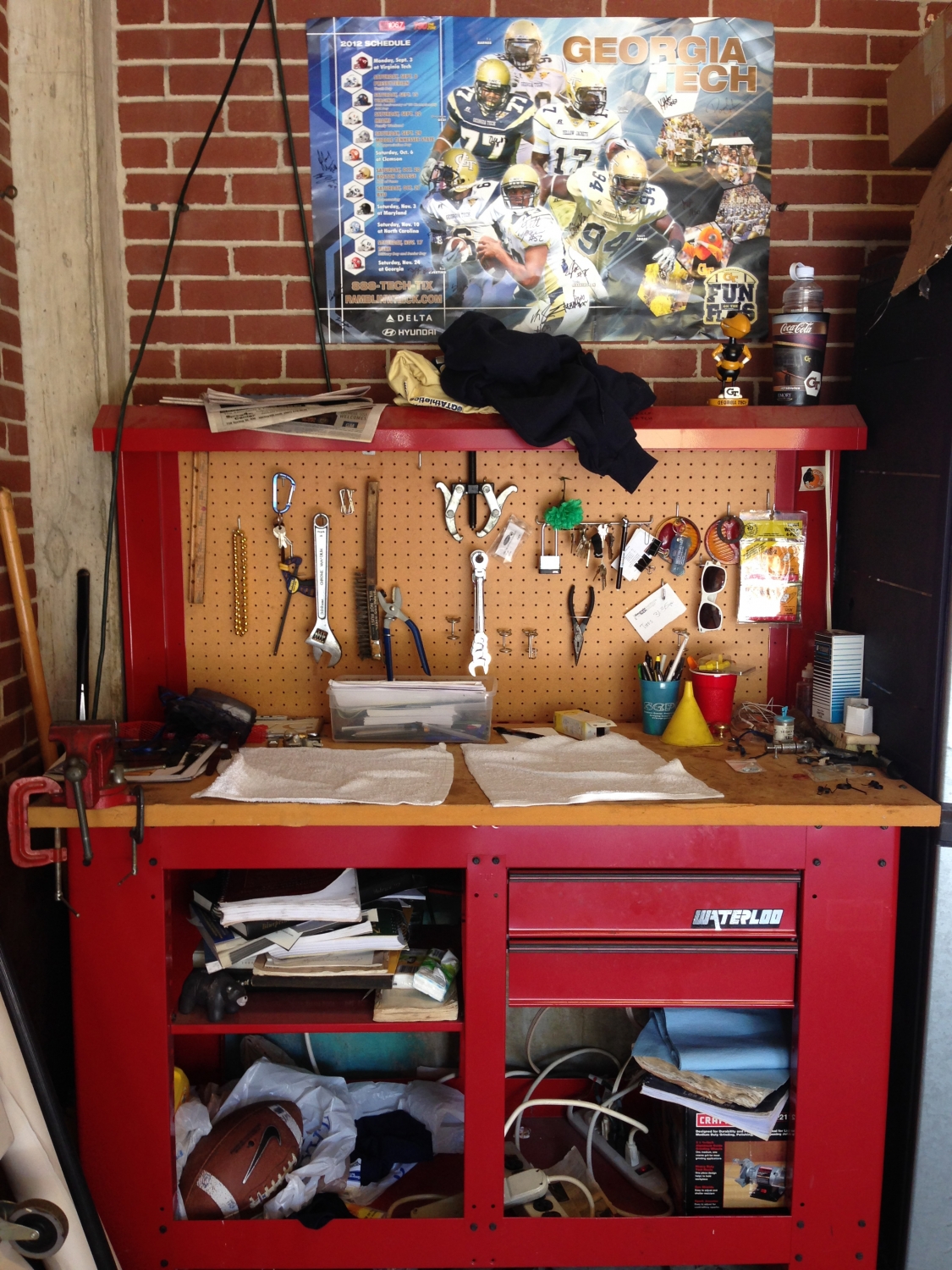 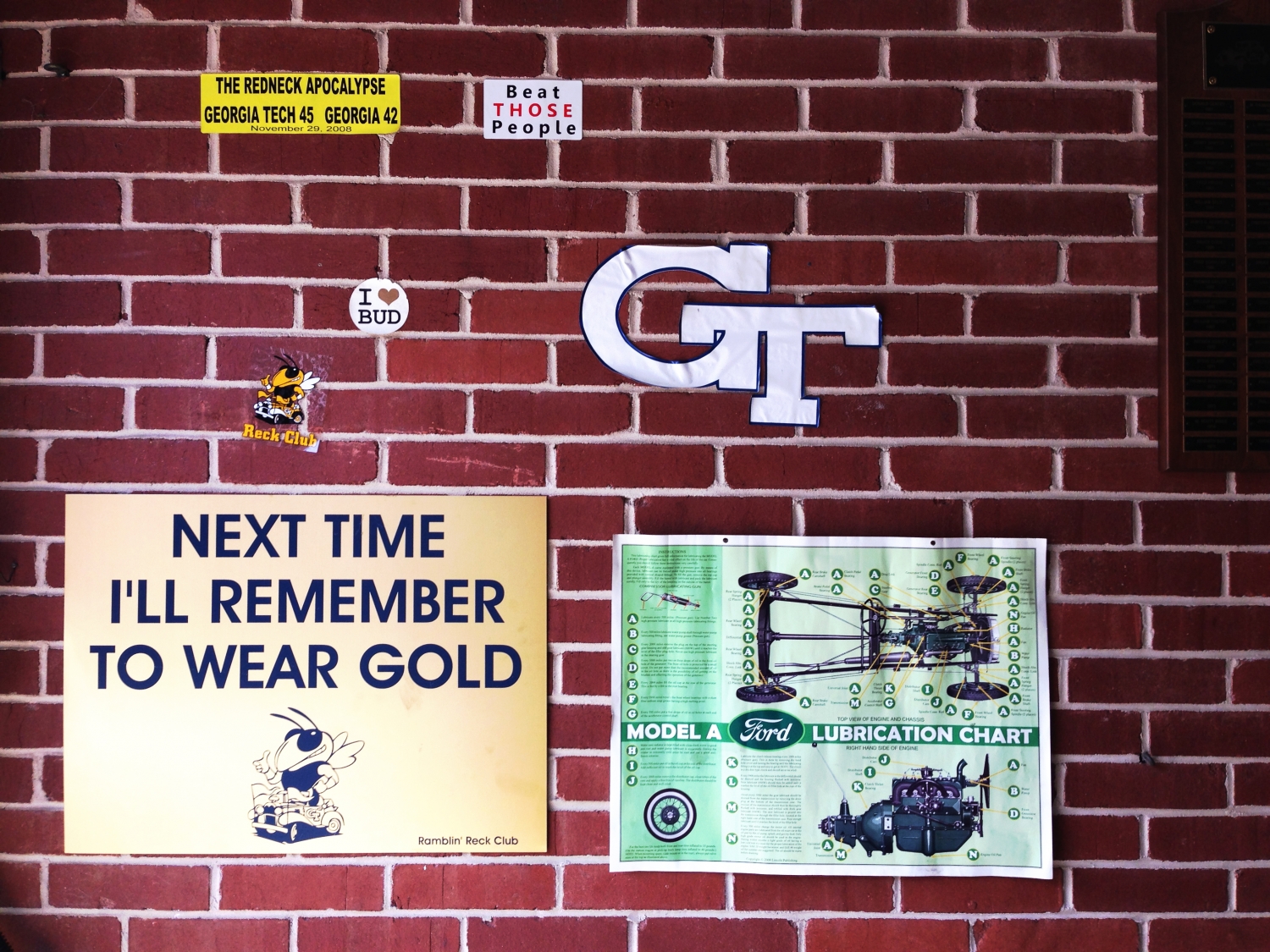 Back detail of the Ramblin' Wreck.

Rear detailing on the Wreck.

The Wreck from the front.

One headlight and front fender.

Brass detailing on the side of the Wreck's roof.

Interioir embroidery on the Wreck's seats.