Alumnus Brandon Cox's quest to understand the human experience fueled his travels to all seven continents and 149 countries before he turned 35 years old.

Beautiful Lake Tanganyika stretched before me never-ending as a fog ensconced the Congo to my east, and on my left a city flickered in flashes of a muddled death.

My feet dug deeper into the lakeside orange sands, and I clenched my drink harder as each explosion flashed in the distance. On the edge of town, deafening blasts rocked a country exasperatedly fighting for a life of normalcy.

I pondered what had led me here, to this place. I thought of my peaceful childhood home and life growing up in the suburbs of Atlanta. It seemed a world apart from Africa.

My global travels began when I was a student. Fifteen years later, I have been to 149 countries and all seven continents.

My global travels began when I was a student at Georgia Tech. I journeyed overseas for the very first time to visit a friend of mine studying in Glasgow, Scotland.

A new passion ignited inside me, and I embarked on two study-abroad experiences before graduating. It seems like yesterday that I was 20 years old and packing for my first international trip.

Fifteen years later, I have been to 149 countries and all seven continents, yet I feel the same excitement each time I visit somewhere new.

In those early years, my travels were driven by my studies in conflict resolution. On my very first solo trip to Japan and South Korea, I met a young woman who told me a fascinating story about her family — half of whom lived in North Korea, half in South Korea.

It’s these types of personal connections that would inspire me to visit North Korea, and later go into Zimbabwe during their stolen elections in 2008.

One memorable scholarly expedition was an overland trek through Africa, from South Africa to Jordan and back. It was then that I discovered what truly gives people the means of surviving in conflict zones.

Despite food shortages, no access to clean water, unimaginable violence, and governmental corruption, life went on for people living in these places. My determination to understand the coalescence of peace, trade, and war in conflict zones is what had brought me to Lake Tanganyika on the border of Burundi and the Democratic Republic of Congo.

I left one civil war for another, venturing farther into lovely but lawless lands. And, in doing so, I learned that nowhere in this world is inaccessible. I also learned that trade continues despite war, and somehow, miraculously, regional economies keep people alive.

Some simple moments will always stay with me, such as sharing a beer with government officials in North Korea and discussing the joys of our completely different worlds. My travels have taken me to some very dark corners of the world, but those corners always surprised me with their magnificent natural beauty — and the beauty of the people who lived there.

Also, I will never forget hanging out with young men on the beach in Somalia talking about the funny differences in our marriage traditions. They were quite shocked that that I didn’t have a desire for multiple wives.

In Iraq, a hotel owner gave me a free place to stay in a town with no available rooms, but we ended up chatting all night about the scourge of organized crime that affected his small business and community.

The next day I met some local men who took me on a proud tour of their hometown of Erbil. A few months later while crossing from Albania into Macedonia, the men giving me a ride described all the intricacies of the corruption so prevalent in their countries. They knew best, after all, because they happened to control a modest criminal empire themselves.

There were absolutely terrifying moments as well. I barely escaped an attempted kidnapping while crossing from Honduras into Guatemala one night.

In Bahrain, driving around following the Arab Spring uprisings, I turned onto a street and was indiscriminately fired upon by rioters with AK-47s. They even threw a Molotov cocktail at me, or maybe it was at the police behind me who were firing tear gas over my car. I never stopped to ask.

To be sure, I’ve had a great deal of fun, too. I have snowboarded on four different continents, sledded in Antarctica, jumped off numerous waterfalls, scuba-dived off countless coasts and gone on safaris in Africa. 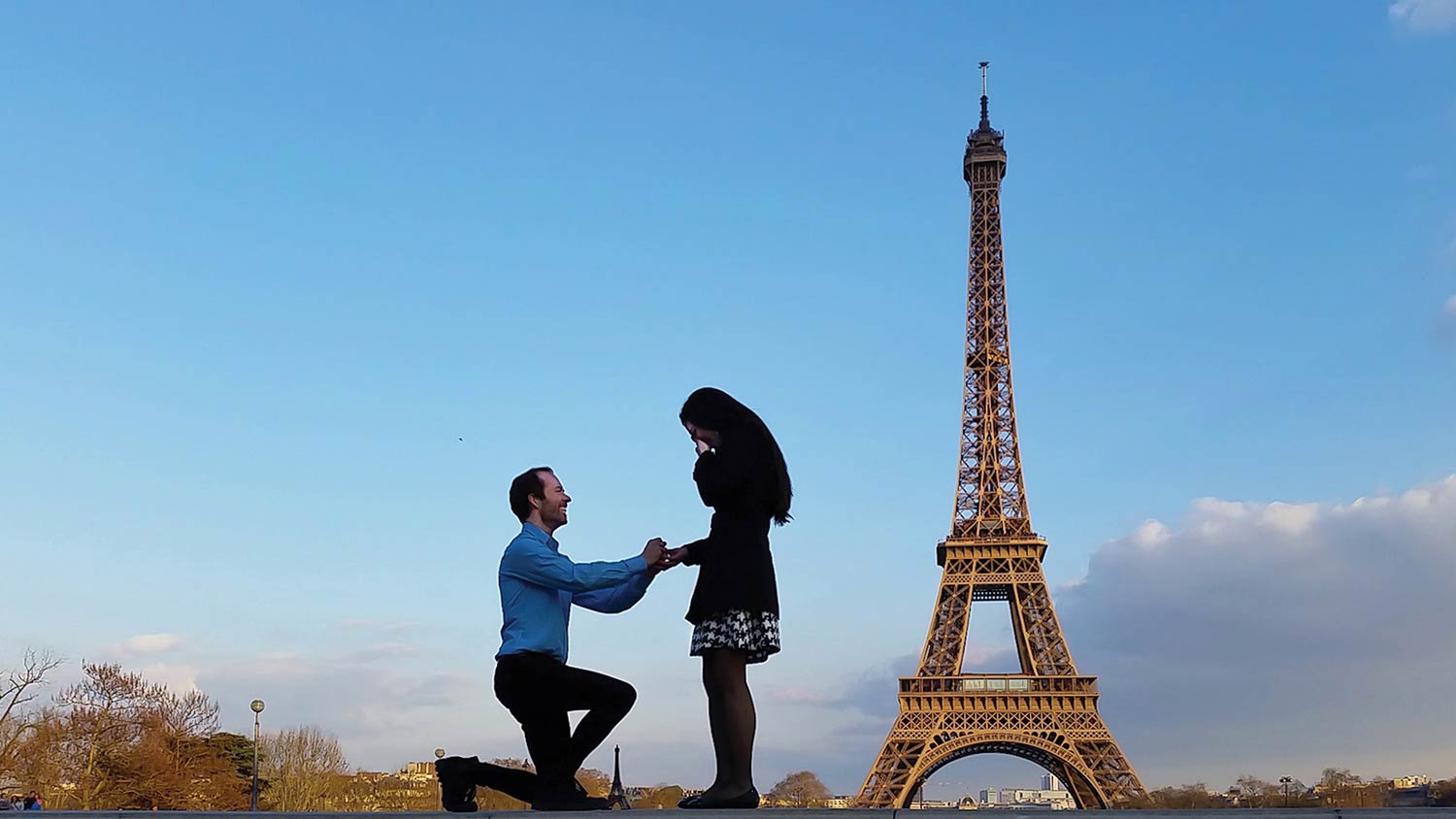 Today I work as a senior analyst for Delta Air Lines in Paris, based at the Air France KLM Headquarters, and I take advantage of the travel perks of working for an airline whose reach extends across the globe.

Perhaps the most important trip I took was in 2011, when I went on a spontaneous weekend jaunt from Hong Kong to Taiwan. That night, I was invited to a party where I met a beautiful American girl.

My weekend trip turned into 10 days exploring the country with her.

I proposed to her on Easter in the City of Love, Paris, with the Eiffel Tower looming over us. And last August, we got married.

My travels continue, but at a different pace. This year, I am excited to journey to my 150th country, and now I have someone to share the world with. That is the best adventure of all.

“I’ve had a great deal of fun. I have snowboarded on four different continents, sledded in Antarctica, jumped off numerous waterfalls, scuba-dived off countless coasts, and gone on safaris in Africa.” 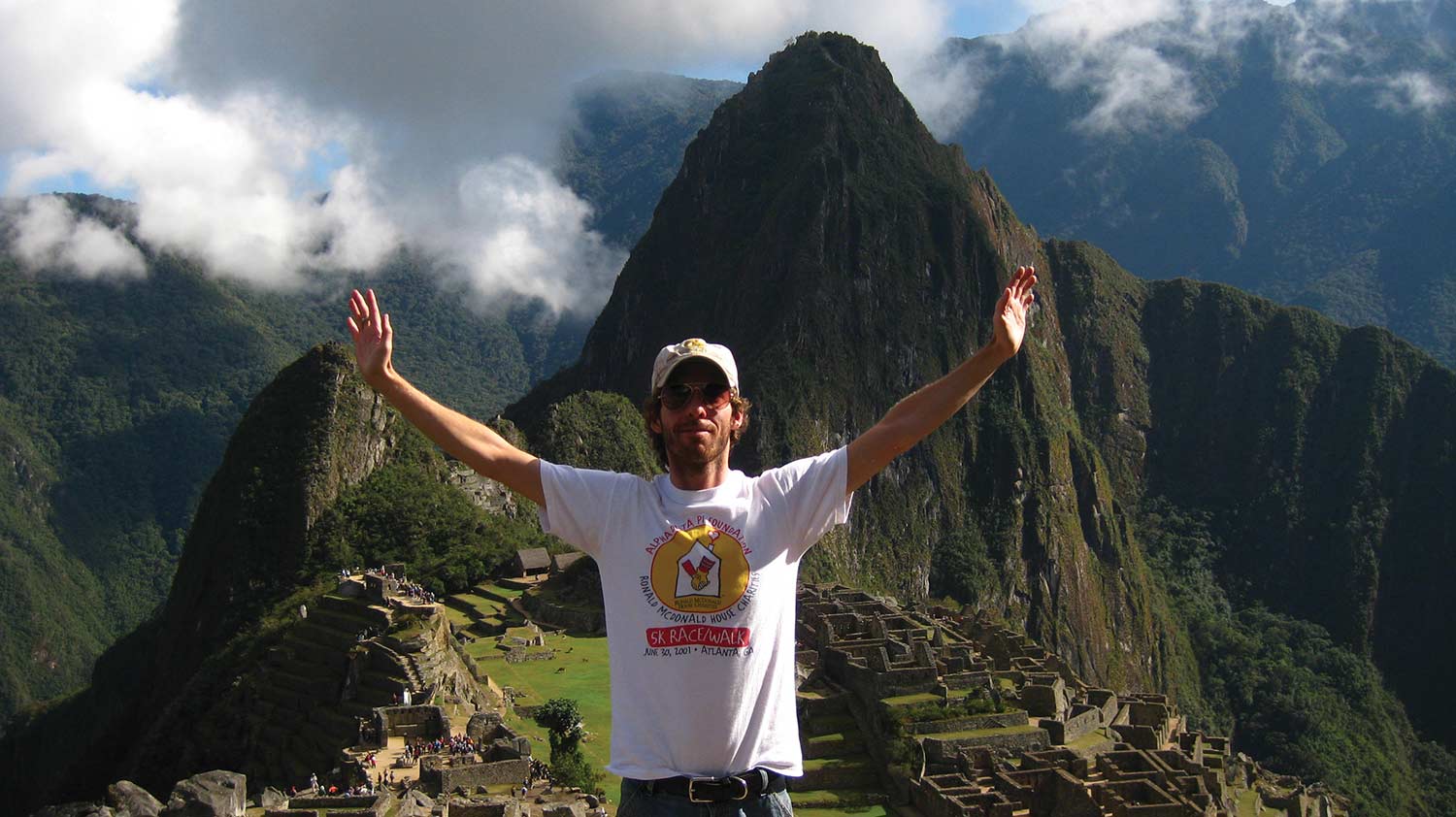 I woke up at 3 a.m. and hiked up the mountain in the pitch black from the town of Aguas Caliente to secure one of the limited entrance passes to Huayna Picchu. The views were definitely rewarding, and I spent at least 13 hours exploring (and relaxing with llamas!) at this World Heritage Site. 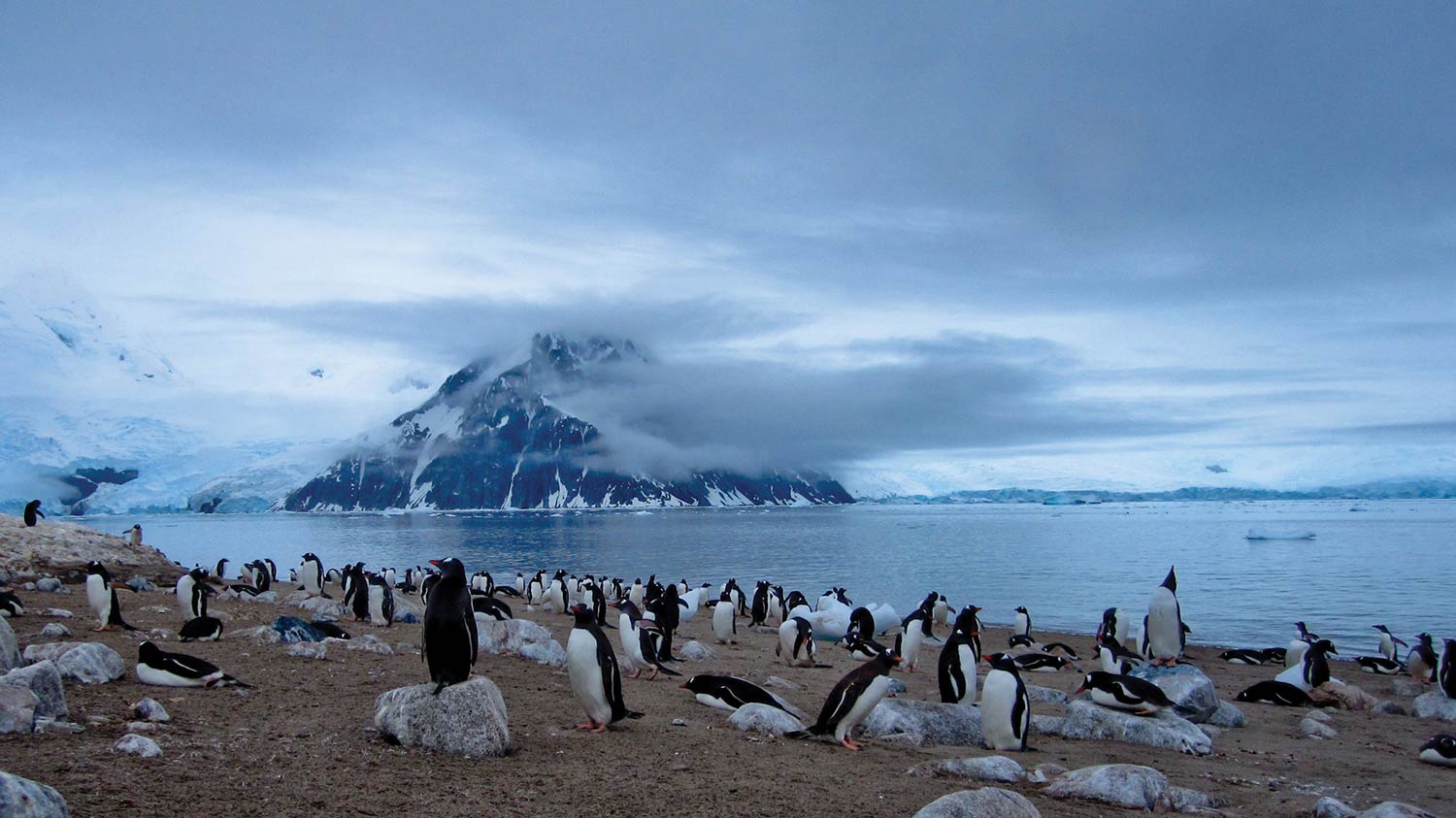 Antarctica, my seventh continent reached, surprised me with its completely otherworldly beauty and rich wildlife — especially the penguins. I swam in the freezing Antarctic Ocean surrounded by an active volcano, helped rescue passengers of a ship stranded after it struck an iceberg, sledded down snow-covered mountains, watched whales dance as I ate breakfast, visited scientific research stations, and even had a barbecue one particularly “warm” day. It’s the adventurer’s destination of a lifetime! 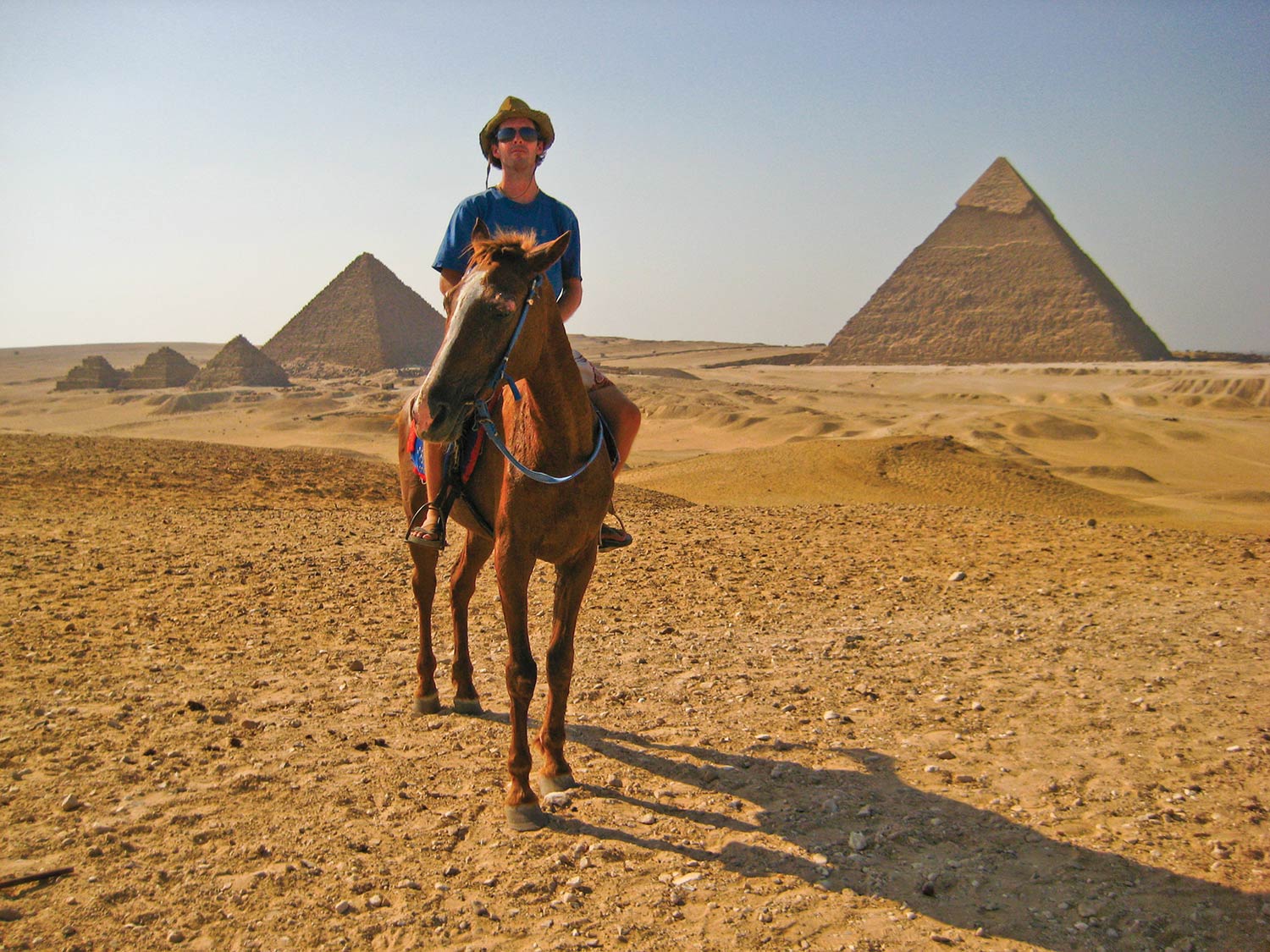 A local Egyptian taught me the secret to seeing the pyramids — go by horseback. We entered through a secret entrance and galloped through the desert around the pyramids all day for the same price most tourists pay to enter the historic site.

“My travels have taken me to some very dark corners of the world, but those corners always surprised me with their magnificent natural beauty — and the beauty of the people who lived there.” 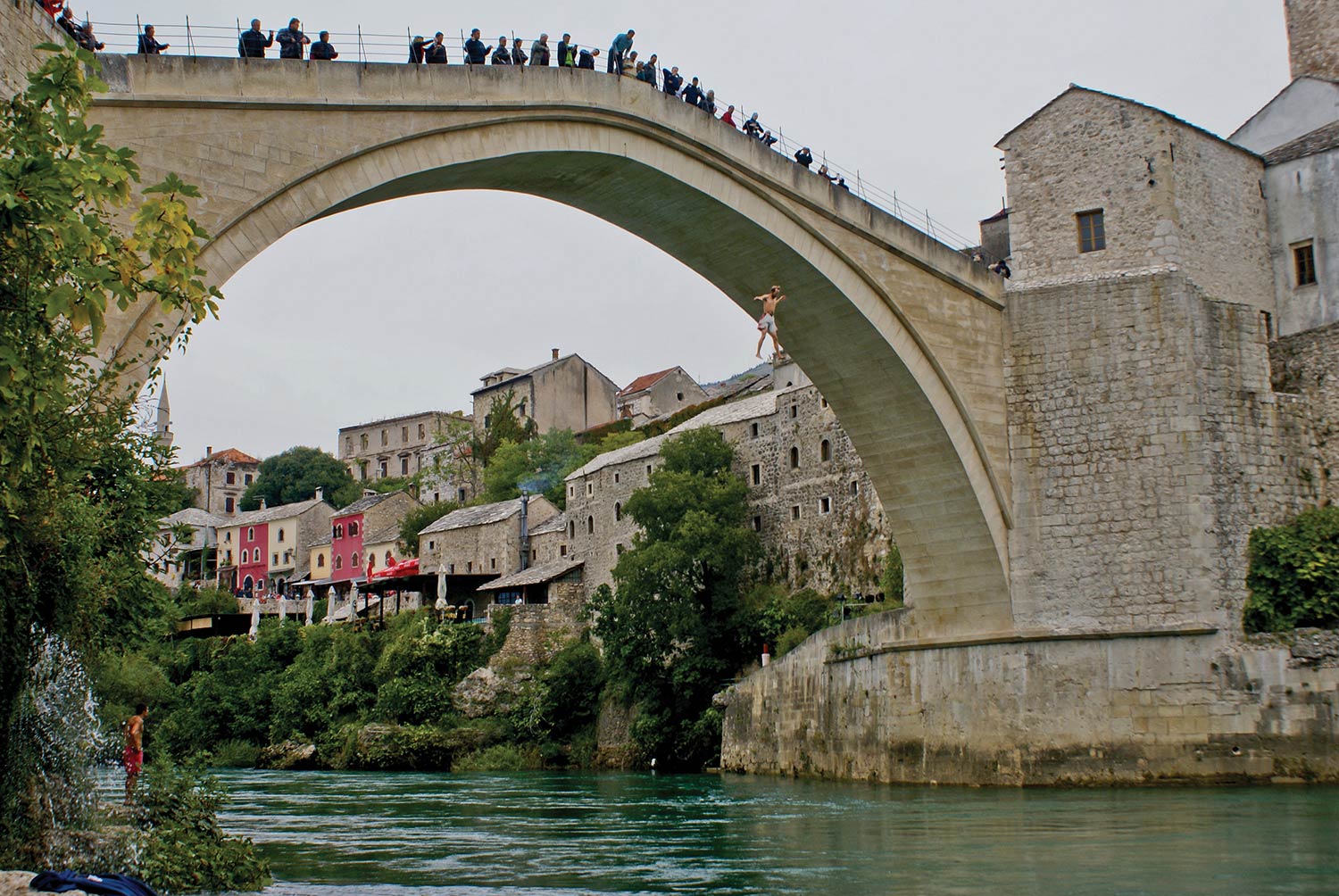 One night I befriended several members of the Mostar Diving Club. The next day I saw them jumping from the Stari Most Bridge, 86 feet down, into the freezing cold river below. The bridge joins the Muslim and Christian sides of Mostar, and remnants of the Bosnian conflict can be seen in the many bombed out, bullet-hole-ridden buildings throughout the town. The first recorded instance of someone diving from the bridge is from 1664. In Bosnian culture, the transition into manhood is defined by a jump from this bridge. I just had to join them in this tradition! (Yes, that’s me taking the plunge!) 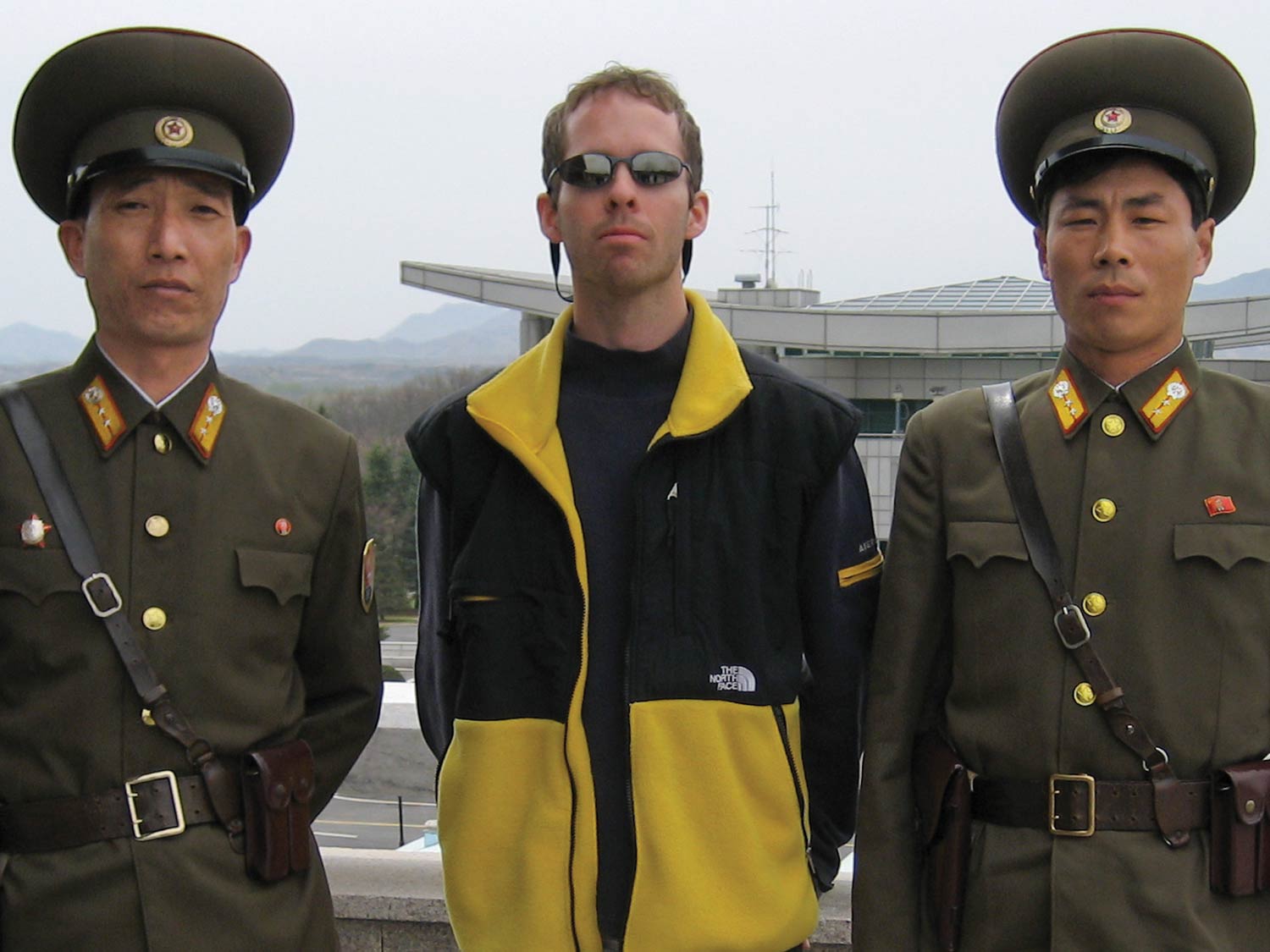 Our planet’s most isolated country truly exists in a world of its own. I was lucky enough to be in the first group of Americans to visit North Korea since Madeleine Albright’s 2000 visit. The country maintains a tight choreography for its visitors. I’ll never forget the priceless looks we received from the U.S. soldiers stationed in the South when we waved at them from the North. 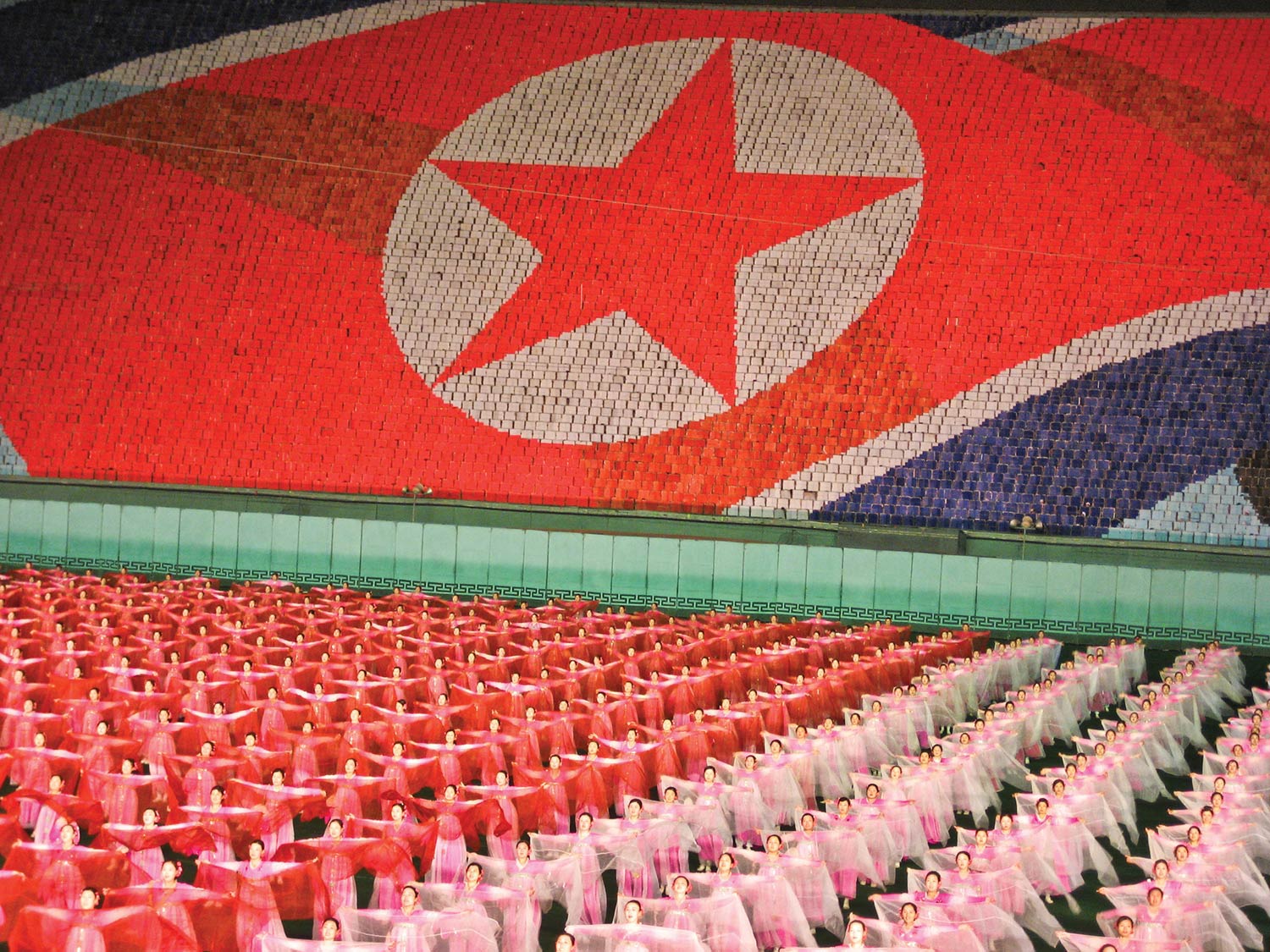 North Korea’s Mass Games are held in May Day Stadium, which seats more than 200,000, in the capital of Pyongyang. Some 100,000 children performed in choreographed gymnastics, called Arirang, while another 20,000 kids held up cards in the background to create intricate and detailed background murals. The children practice for more than a year for this performance. 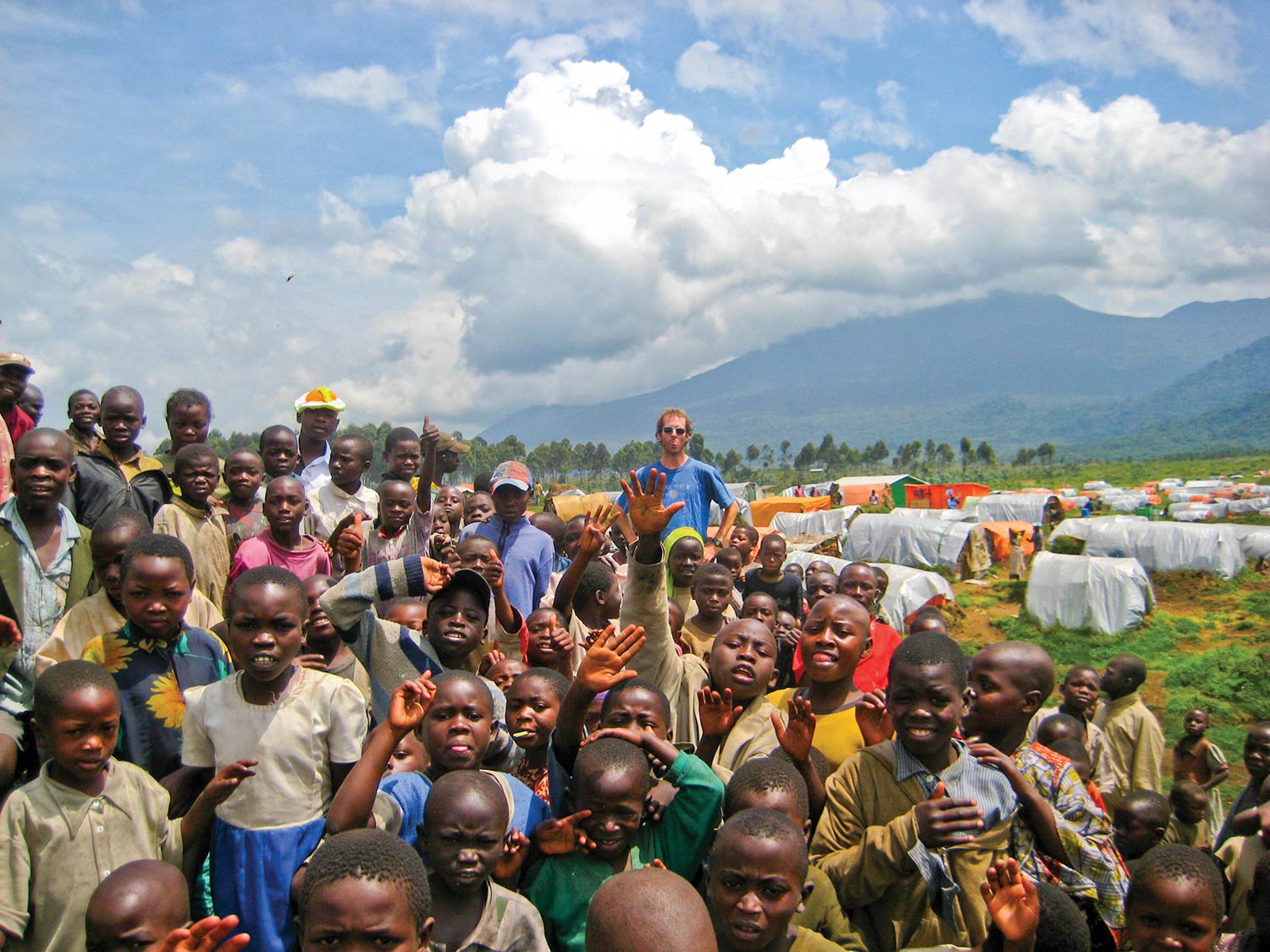 I volunteered briefly at this Internally Displaced Persons camp in North Kivu, and stayed in the town of Goma for over a week. Each day we bought medical supplies for people desperately in need of help.

“Today I work as a senior analyst for Delta Air Lines in Paris, based at the Air France KLM Headquarters, and I take advantage of the travel perks of working for an airline whose reach extends across the globe.”

Another continent conquered! This breathtaking view of the Sydney Opera House and the Harbour Bridge is nothing less than iconic. 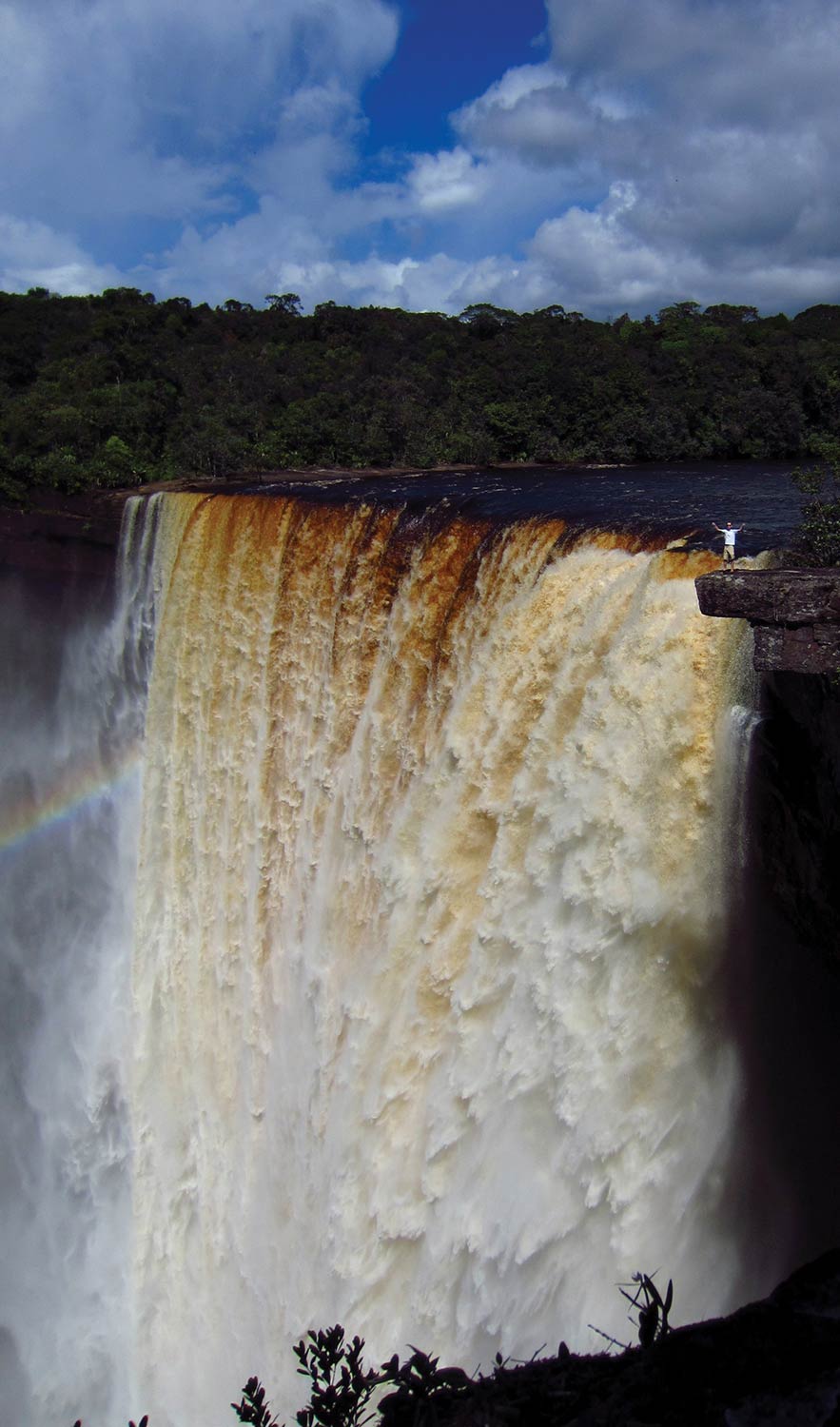 First you must charter a plane deep into the jungle of Guyana to visit Kaieteur Waterfall, the world’s largest single-drop waterfall at 741 feet high.

The plane journey was incredibly beautiful, though when it was time to leave the falls, I sat in the cockpit and saw up close how we barely made it off the end of the runway, which ended at the cliff’s edge. 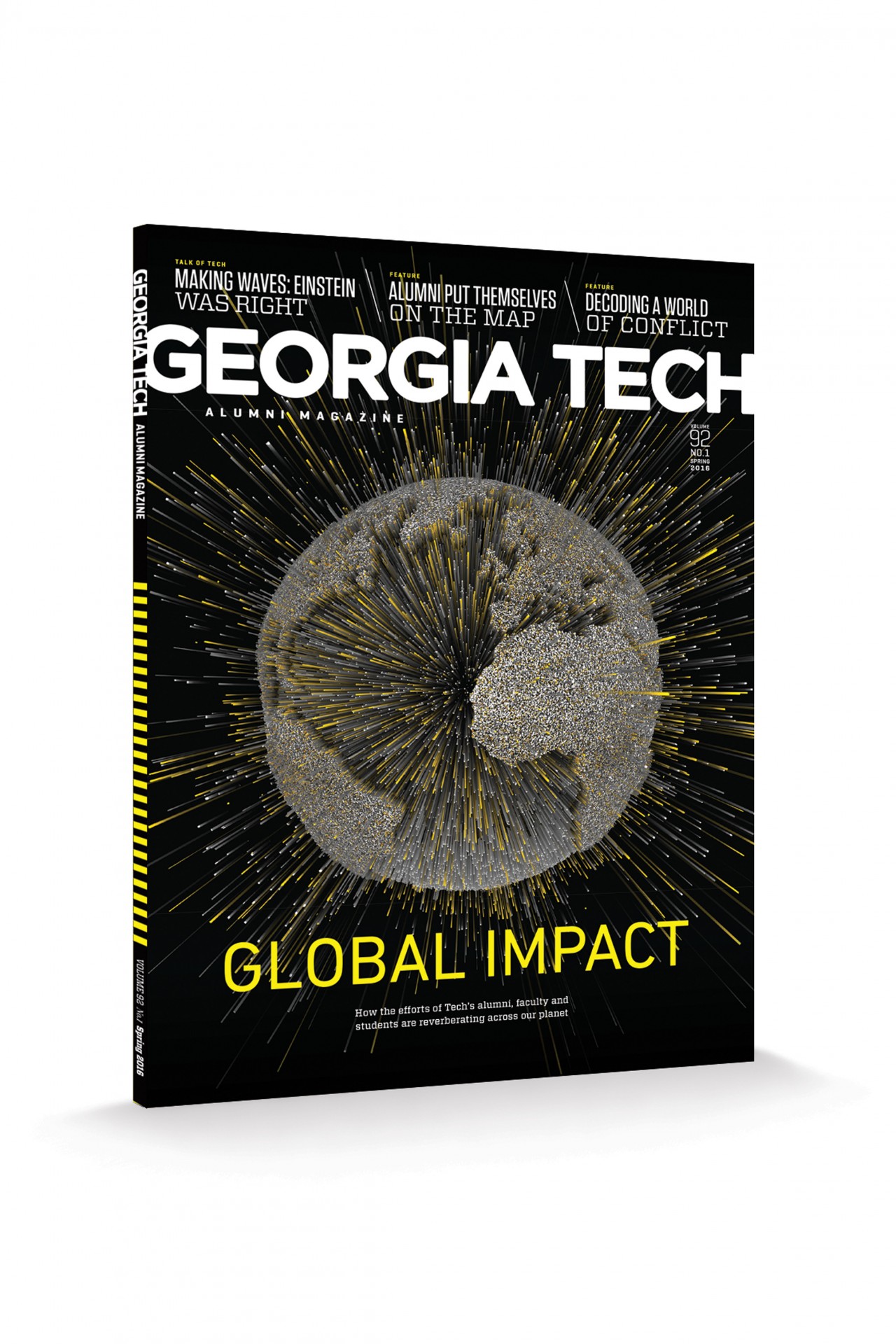 This story originally appeared in the Spring 2016 issue of the Georgia Tech Alumni Magazine.