Since the age of six, Michael Gamble knew he wanted to be an architect.

“I grew up in a family that made things,” he said. “My father studied industrial design [at Auburn University]. My mom and grandmothers were all makers. I was in a very visceral, hands-on, creative environment — be it cooking or building things.”

A native of Montgomery, Alabama, Gamble attended Auburn like his father.

“My parents said, ‘You can go to school wherever you’d like, but the only place we’ll pay for your undergrad is Auburn.’ So, it was a no-brainer. And, it was the right decision,” he said.

“I didn’t set out to be an educator,” said Gamble, a registered architect and creative director of his family-owned firm. “There were some very inspirational teachers at Auburn, Georgia Tech, and Harvard — people that I really admired. The longer I stayed in school, the more I realized that teaching was a clear path to try to effect change. Not everyone can be a Steve Jobs or a Thomas Edison, but I think you can change the world through teaching. Teaching is formed around a sense of wonder and curiosity, and participating in extended dialogues around challenging problems that need to be solved became part of my career path.”

In the School of Architecture, Gamble works with the High Performance Buildings group, conducting applied research.

“I am a designer working with a group of scientists focused on building performance — anything from energy conservation, energy generation, daylighting strategies, sustainable building practices, or anything that has to do with ‘healthy places.’ We are working deliberately to make elegant buildings that are healthy,” he said. “I’ve been really involved with the Living Building here at Georgia Tech. Living buildings are the next level — buildings that can be recycled, buildings that aren’t toxic, buildings that generate more energy than they consume.” 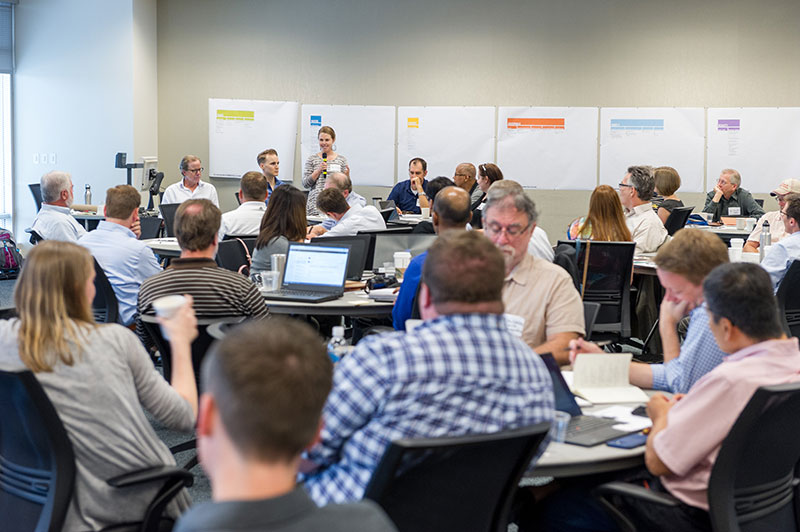 The kick-off event for the Living Building at Georgia Tech.

Gamble primarily teaches master’s students, such as those taking ARCH 6072 (Architectural Design and Research Studio 2). Students spend four hours a day, three days a week in a design studio, and they have a lot of one-on-one conversations with Gamble. Students work in teams, generating ideas and expanding the problem in order to solve it.

“The students pin their work on the wall and we talk about it,” he said. “I really like to have the class involved as peer reviewers; it engages all of them. It’s very different from an examination where you’re preparing to take a test.” 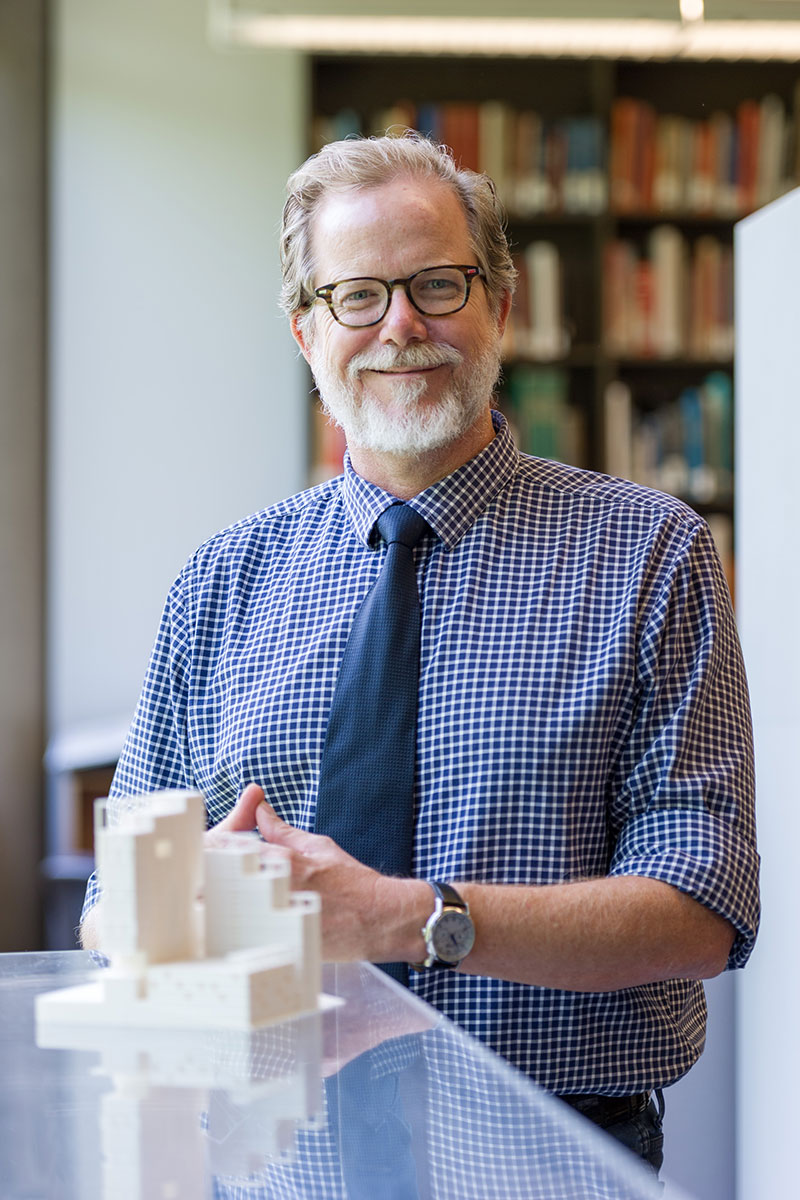 At the outset, Gamble establishes two or three clear learning objectives for the students so they know what to expect. He also establishes a culture of discipline.

“I start class on time. I don’t wait. I like developing a discipline around being timely,” he said. “When creating an open and friendly environment, you can be firm and still be polite and encouraging. You don’t have to be rude or try to put someone under your thumb. That’s not what it’s about. It’s about being ready and generating excitement around the subject.”

And, part of the excitement shows up in the form of questions.

So, what is his secret? 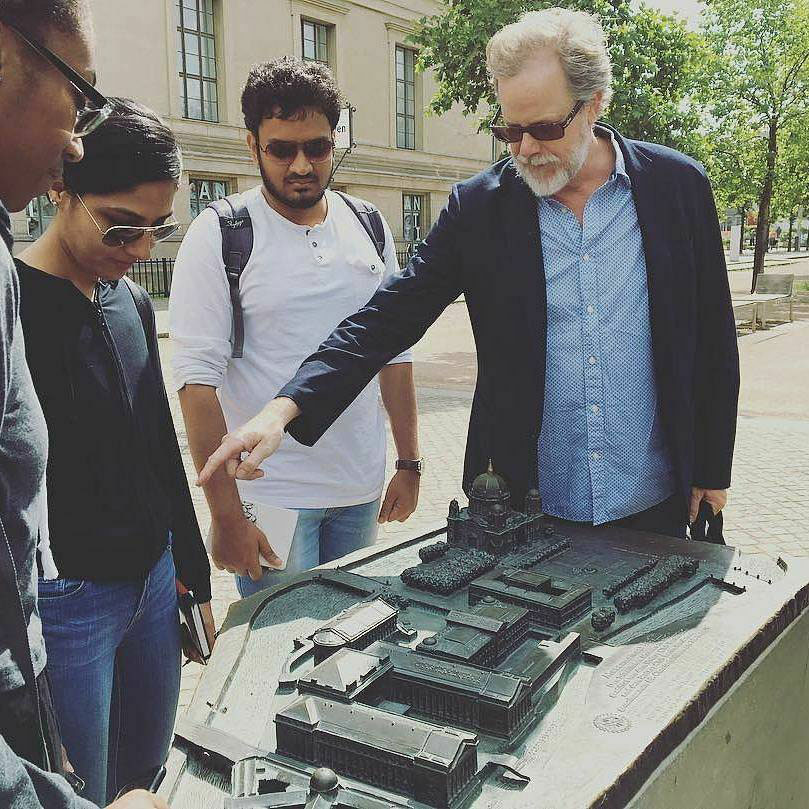 Michael Gamble with students in Berlin on May 31, as part of the "Modern Architecture and the Modern City" summer program. Image from Instagram user jingyi940323

“One of the keys to being a successful teacher is feeling a sense of obligation to deliver, and feeling the need to be prepared,” Gamble said. “Come ready to teach, and show up on time. Put it out there, and give it all you’ve got. In a way, it’s almost like a performance … like a recital.”

Another thing that has worked for Gamble is learning every student’s name as quickly as possible.

“I know that’s impossible in a class of 300 students. But, in the courses that I teach, even if I have 20 students, I try to learn all their names the first day,” he said. “As soon as you connect with someone and you know their name, it changes the relationship instantly. It creates a strong connection and a real sense of obligation to the subject.” 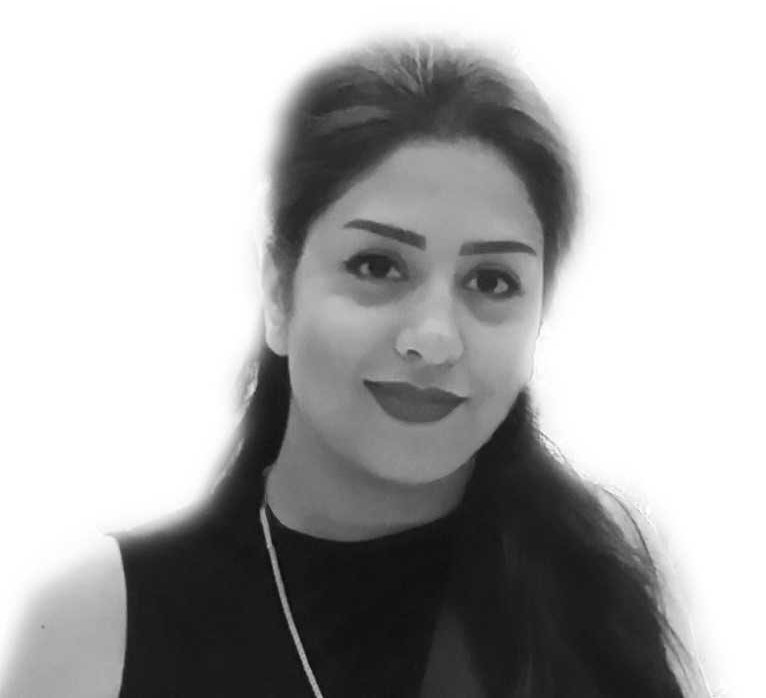 From the time she entered the Master of Architecture Program in 2015, Pegah Eghbalzad said she was aware of and curious about the “unique atmosphere” of Professor Michael Gamble’s studio (ARCH 6072).

“From the beginning, I wanted to try his studio because there was a certain simplicity and elegance in the work produced in his studio. Luckily, I got a chance to take his studio during my very last semester at Georgia Tech,” said the May graduate, who now lives in Copenhagen, Denmark.

She said her biggest takeaway regarding Gamble’s style of teaching was how he encouraged students to follow their ambitions and develop a sense of confidence in their abilities.

“He also made sure the students were prepared for the world after graduation. Being in architectural practice himself, Professor Gamble helped students increase their understanding of how academic architectural knowledge was going to be applied in practice,” she said. “I also enjoyed the relaxed atmosphere of his class. Although, I believe he is one of the strictest instructors at the School of Architecture, he managed to create a warm and stress-free environment.”

Another thing she admires about Gamble’s teaching style is how much time he spends with each student.

“He made sure that there were no questions unanswered,” she said. “I enjoyed every minute of his studio, and I appreciate the opportunity I had to learn from him.” 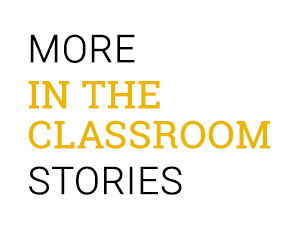