A Science of Ice and Fire 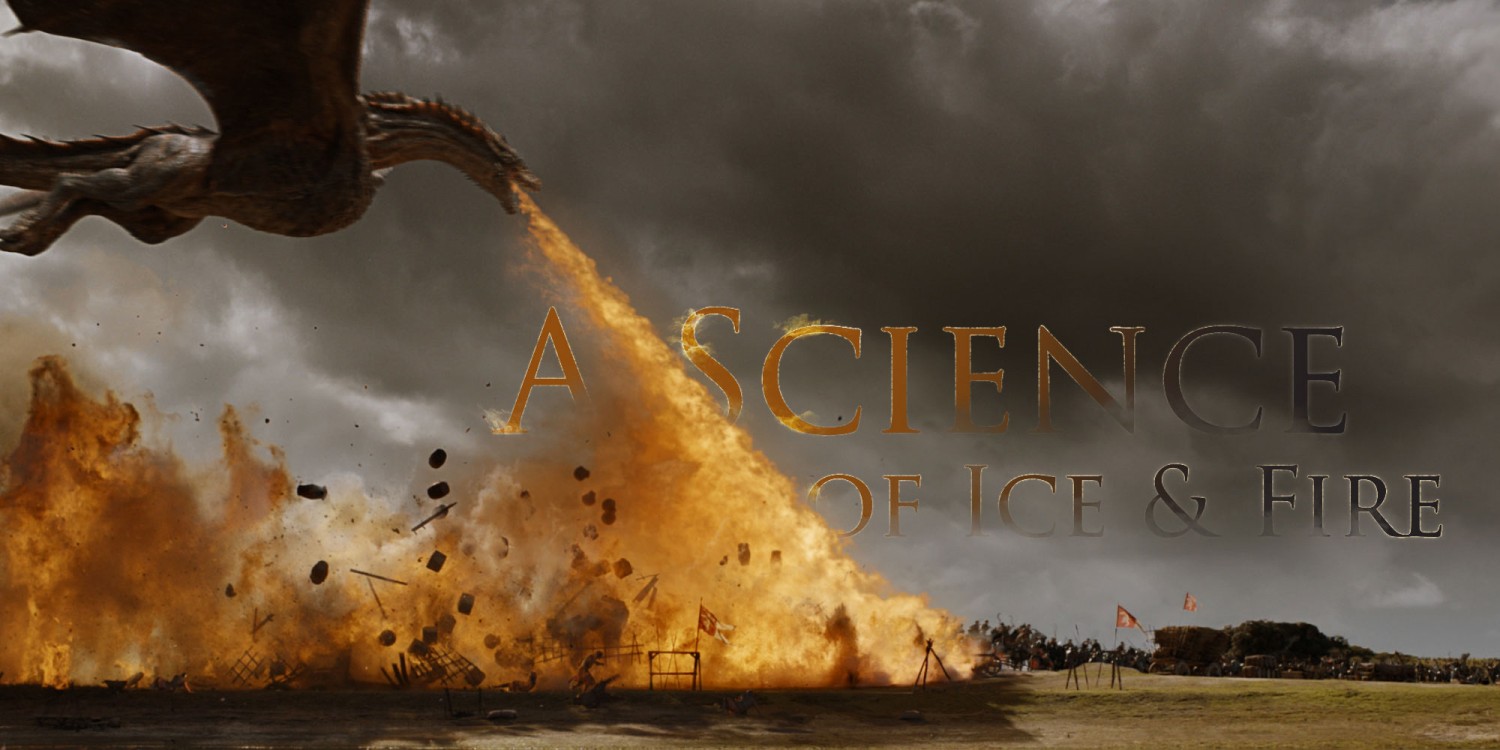 Game of Thrones is more than a global media phenomenon. Enormously popular with college students, the show is a hot topic in classrooms, where it offers lessons in areas as diverse as story structure, languages and cultures, power dynamics, and the art of war.

In anticipation of the final season of the seminal television program, we approached students and faculty to explore some of the possibilities Game of Thrones holds beyond entertainment.

It isn’t a particularly bold supposition that dragons are a formidable weapon. Still, we wondered: exactly how much of an impact would a dragon have on a battlefield? Chandler Thornhill, a graduate student in economics, and Matthew Redington, a graduate student in computer science, offered to devise a few simulations.

Both are currently enrolled in the course Modeling, Simulation, and Military Gaming, an interdisciplinary, project-based class requiring collaboration across a range of backgrounds and skills. Groups of students spend a semester researching and dissecting historical battles, using this deep understanding to adjust variables and outcomes through computational modeling. 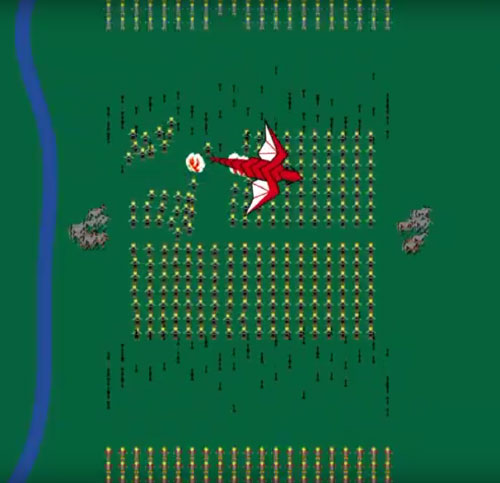 Creative visual of a simulated dragon in battle

Introducing fantastical elements may seem an inconsequential exercise, but to one of its instructors, Sam Nunn School of International Affairs Assistant Professor Mariel Borowitz, introducing pop culture elements allows students to connect with modeling simulations in a different way.

“One of the things I like about bringing dragons into a simulation is that you really have to go through the same research process,” she said. “You have to be rigorous in how you find data and how you make assumptions. Obviously, there’s not a lot of data available on a dragon’s efficiency but you can look at the information sources available as a basis to formulate and justify assumptions. It shows the process can be applied in all sorts of areas.”

So how much of a difference did the dragon have? By their calculations, roughly 70 percent of opposing forces were turned to ash.

More than 20 years ago, in her seminal book Hamlet on the Holodeck, Janet Murray, the Ivan Allen College Dean’s Professor, predicted the rise of a new genre of deeply complex narrative driven by the marriage of television and computer.

It would be what she called the “hyperserial.” Plot, backstory, and detail too fine to showcase in an hour-long drama would pass back and forth between television screen and computer screen, high-speed digital transmission of content would enable new ways of accessing stories, and narrative would, as a consequence, grow richer and more complex. 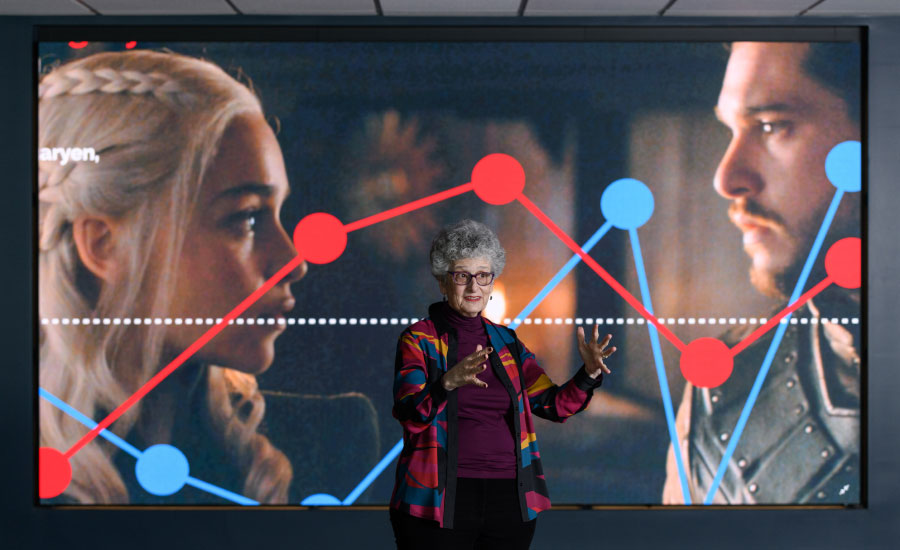 “The confusion we feel in viewing programs like Game of Thrones, and the immersion that draws us to them, are signals to me that these stories are outgrowing the classic television format.”

Nowhere has the promise of complex narrative storytelling been so fully realized as HBO’s adaptation of George R.R. Martin’s A Song of Ice and Fire novels. So it is no surprise that Murray and her students in the college’s Digital Media program have used those stories to test her hypothesis.

“The confusion we feel in viewing programs like Game of Thrones, and the immersion that draws us to them, are signals to me that these stories are outgrowing the classic television format,” Murray said. 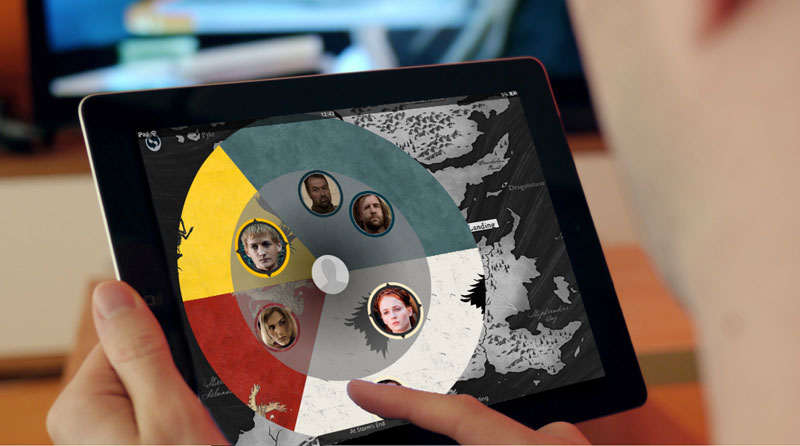 In recent years, Murray’s students in the Prototyping eNarrative Lab (PeN Lab) have prototyped a companion app meant to help fans keep track of the dozens of characters, backstories, alliances, and antipathies that make up the dizzyingly complex world of Westeros. Working with Murray, they also have built an application to help viewers track the many plots of Game of Thrones, and the fates of its characters.

The companion tablet app provides a moment-by-moment window into a Game of Thrones episode, automatically serving information about onscreen characters and their relationships without user intervention.

The Digital Story Structure Project graphed the fall and rise of characters, showing, for instance, the opposite fates of Daenerys Targaryen and Jon Snow early in the series, followed by the merger of their fates in season 7.

To a medievalist like Richard Utz, professor and chair in the School of Literature, Media, and Communication, Game of Thrones is engrossing, if unsettling, fantasy, one of the most complex narrative structures ever attempted, and a “highly valuable admission ticket to the study of contemporary media.”

One thing it is not, he said, is “medieval.” 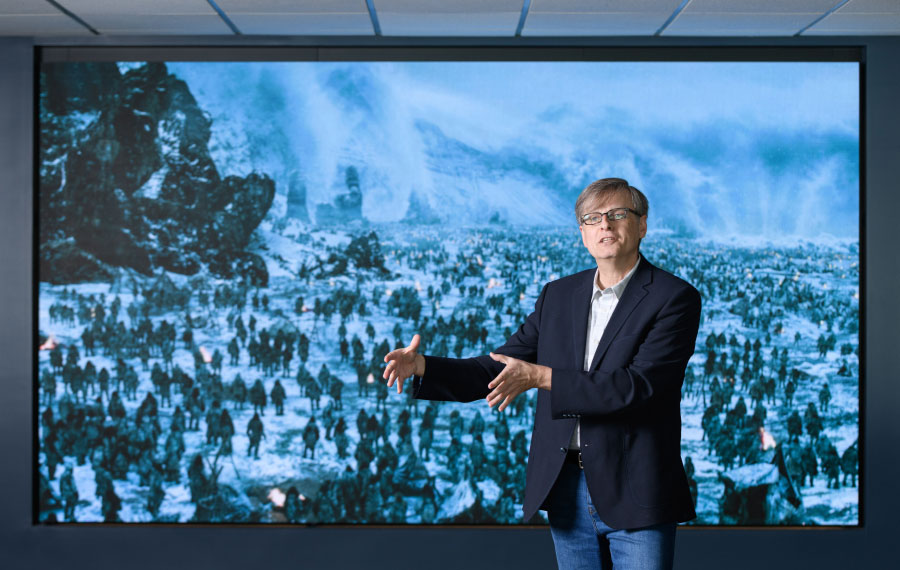 “While it is set in a fictional past, it raises a host of issues about our past, present, and future, and provides rich opportunities to examine our current interplay of cultures, politics, and social mores.”

While the global fascination with Game of Thrones is sometimes seen as a recruitment opportunity by scholars of the Middle Ages, focusing on the books and HBO show from a traditional medievalist’s perspective is too limiting and self-serving. 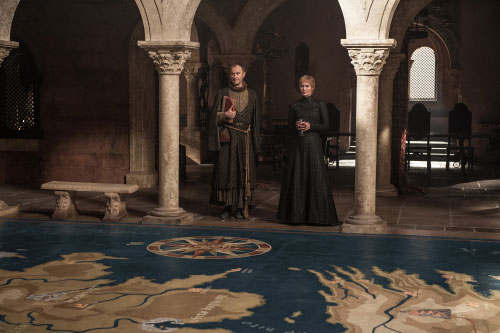 “It is a global phenomenon. It is the most widely watched television show in the world ever,” he said. “While it is set in a fictional past, it raises a host of issues about our past, present, and future, and provides rich opportunities to examine our current interplay of cultures, politics, and social mores.”

Utz has written about his aversion to the use of novelist Martin’s world as way to lure students into studying the Middle Ages.

“Classes on the Middle Ages rarely need advertising because of the general cultural love affair students have with medievalist topics,” he said. “Game of Thrones needs to be studied as a contemporary media phenomenon that uses a vague ‘medieval feel’ as one of its attractions.”

In fact, he finds it notable that one of the main characters, Sansa Stark, began the series seeking the trappings of the romantic ideal of the Middle Ages — princesses, knights, and all — only to see that fairy tale viciously taken from her at every turn.

“Watch out for Sansa Stark in season 8,” he predicted. “She will play a major role in how the story unfolds, as will some of the other women whose paths have been transformed throughout the series. Like in classical drama, it’s the survivors who, having learned many difficult lessons, are the real heroines of this story.”

But he does see Martin’s stories and especially the HBO adaptation as an excellent place to meet students where they already are — invested in stories that are indelibly shaped by our current experiences, while retaining the enduring fascination with all things premodern.

“The premodern is an eternal mirror. On the one hand, we like to shudder at the otherness of it to reassure ourselves that we have long overcome its negative features,” he said. “On the other hand, we get to go back, fictionally, to a life that seems so much easier and unburdened by the complicated rules of contemporary civilization. Both responses are illusions, but that doesn’t mean we won’t entertain them.”

Utz plans to use the series as a case study in an upcoming class in comparative media cultures, as part of the new Master of Science in Global Media and Cultures program in LMC and the School of Modern Languages. The program is designed to prepare students to pursue professional careers that require advanced training in communication, media, language, and intercultural competency.

Utz believes that the narrative complexity of Game of Thrones is exactly the right realm within which to model the kinds of practices his students need to succeed and find fulfillment in their future jobs.

“The global city of Atlanta is in dire need of a workforce educated to be skilled communicators across cultural and linguistic divides,” he said. “I am planning on an approach that will confront my students with a wickedly complex scenario that allows for a deep understanding of multiple governmental structures, leadership styles, gender and race relations, linguistic and cultural traditions, and human behavior, a scenario just as complex as the ones increasingly common in future work environments.”

The Fantasy and The Science

THE FANTASY
This often-fatal infectious disease causes the skin to become dark and hard like stone. In rare cases, such as Shireen Baratheon, the afflicted survive. In the following image, Samwell Tarly attempts to treat Sir Jorah Mormont’s severe case of greyscale.

THE SCIENCE
Epidermodysplasia verruciformis (EV), sometimes called “treeman syndrome,” is a hereditary skin disorder that leaves sufferers especially vulnerable to HPV infections of the skin. It can lead to bumps on the hands and feet that resemble tree bark. EV is not usually fatal. There is no cure, but symptoms can be treated. 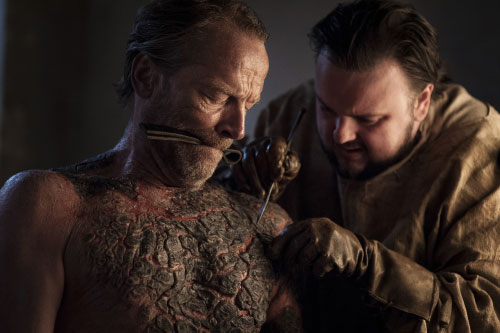 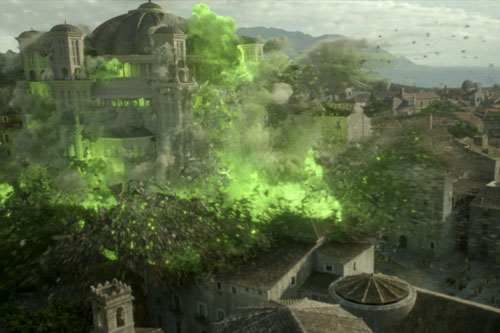 THE FANTASY
Wildfire is a highly flammable, long-burning green liquid used as a chemical weapon. It burns on contact with water and cannot be extinguished until the fuel burns off. It is normally stored in clay jars under a chamber full of sand, which may help extinguish the flame in case of accidental ignition.

THE SCIENCE
Similar to wildfire, Greek Fire was a flammable chemical used by the Byzantine empire. It ignited on contact with water and was used in combat against ships. It was most likely made from naphtha and quicklime. Napalm is likely the closest modern equivalent.

THE FANTASY
Dragonglass is a type of volcanic glass used to kill White Walkers. The Children of the Forest make their weapons from it, and in the past people used dragonglass to create candles that cast color-changing light.

THE SCIENCE
Obsidian is glass made from felsic lava, which is rich in feldspar and quartz. The lava cools very quickly and results in minimal crystallization, creating an edge so smooth that any irregularity is undetectable even to an electron microscope. 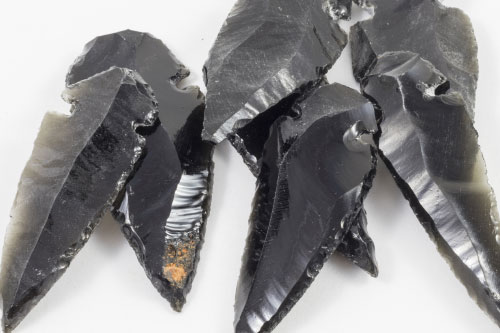 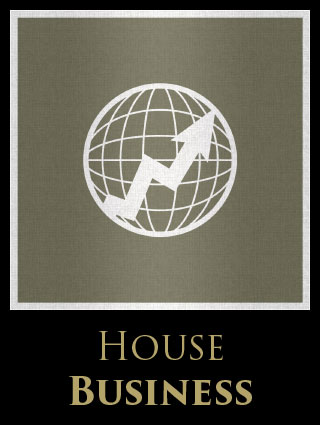 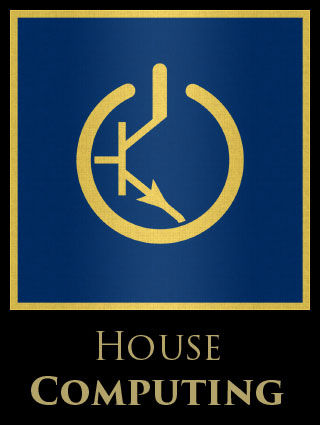 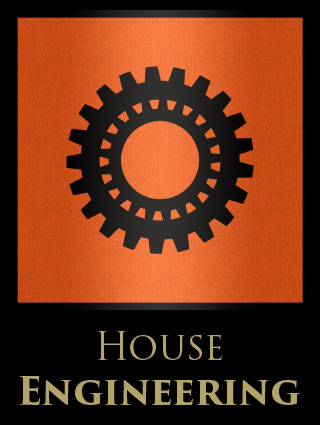 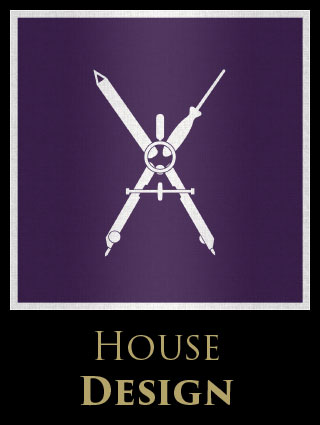 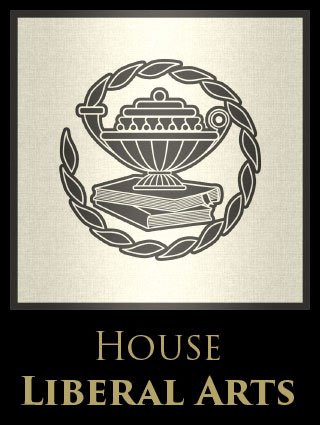 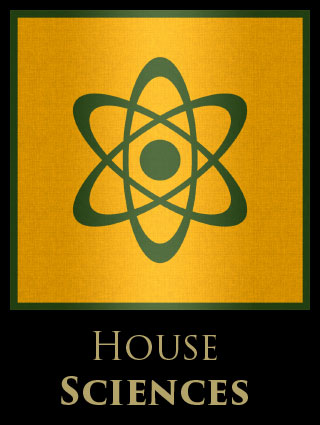 Part of Game of Thrones' appeal is its inspiring cinematography and brilliant dialogue. An interactive data visualization system developed as part of CS 7450 Information Visualization, taught by computing Professor John Stasko, seeks to highlight large-scale patterns in the show that might otherwise be missed.

To learn more about the project and try out the interactive graphic shown here, visit the viz.

Science fiction is about more than entertainment. Just ask one of these Georgia Tech professors.

The Science of Star Wars