President Barack Obama gave shout-outs to George P. Burdell, the Ramblin’ Wreck, and even thermodynamics homework when he came to Georgia Tech on Tuesday to announce his Student Aid Bill of Rights.

“It’s great to be at one of the finest technical institutes in the world,” Obama said. “You’ve got to be if the Ramblin’ Wreck is still running after all these years.”

Nearly 10,000 students, faculty, staff, and guests gathered in McCamish Pavilion to hear from the president, who spent about 30 minutes encouraging students in the pursuit of higher education and talking about ways he hopes to make it more affordable and accessible.

He outlined steps his administration has already taken, such as tax credit expansion, additional Pell Grant funds, and an income-based repayment program.

He also asked for support from the crowd for a new declaration of values he called the Student Aid Bill of Rights. The set of four principles complements a memorandum calling for the Department of Education and other federal agencies to do more to help borrowers afford their loan payments.

“It was really relevant because I’m applying to medical school for next year and didn’t have to take out loans for my undergrad, but I’m going to have to take them out for grad school,” said Deeti Pithadia, a biochemistry major who attended the speech.

How Georgia Tech is Helping to Make College Affordable

A note of thanks to the Georgia Tech community from G.P. “Bud” Peterson

Video: Obama's full speech and announcement of the Student Aid Bill of Rights

'One of the best bargains around'

President Obama encouraged students to keep up their long nights studying complex material, saying it would be worth it, as he believes higher education is the best investment they can make in themselves and in their country — particularly at Georgia Tech.

He commended Tech for its collaboration with the White House on promoting advanced manufacturing, unlocking the mysteries of the brain, and helping more students become entrepreneurs. He cited Georgia Tech’s Online Master in Computer Science program as an innovative way to increase value and use technology to expand access to higher education.

Obama took the time to acknowledge other politicians and leaders in the audience, including Admiral Sandy Winnefeld, a Tech alumnus and Vice Chairman of the Joint Chiefs of Staff.

Learn More about the Presidential Mentions

So, How About That Online Computer Science Degree?

Photos from the President's speech

President Obama encouraged students to not only persevere in their studies, but also to “mobilize” to help make college more affordable for themselves and others. 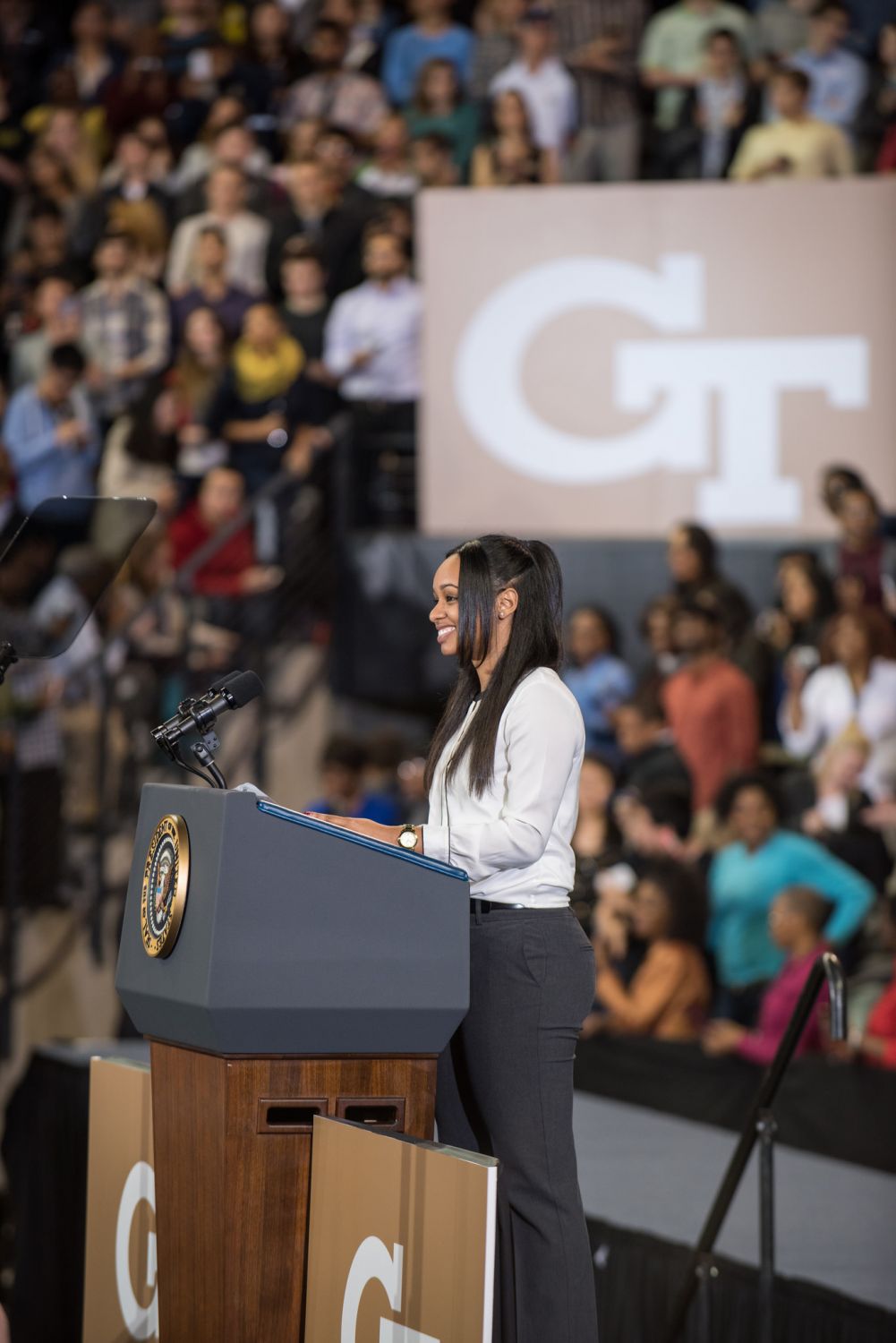 “Young people typically lead the path with new ideas, initiatives, focus, and vision,” he said. “Don’t stop engaging this issue, even after you graduate. In the meantime, study hard, work hard, have fun, make new discoveries, inspire us, lead us.”

Obama made a slow exit from McCamish, taking time to shake hands with many students as he passed.

Vett Vandiver, a graduate student in public policy, had the chance to shake Obama’s hand and tell him he was her hero.

“As a grad student planning to start my career in public service, I’ve dreamed of meeting President Obama since he first started his campaign,” she said. “It was such an honor to witness his remarks and meet him. I’m eternally grateful that Georgia Tech made this experience possible.”

Tiffany Davis, an aerospace engineering major, had the privilege of introducing the president (in place of George P. Burdell, he mentioned). Davis had written a letter to President Obama about college affordability one night last year while taking a study break. To her surprise, she received a letter back. He commiserated that it had once been a struggle for him to afford college as well.

“She didn’t mention that her letter was also to procrastinate from doing thermodynamics homework,” Obama said.

Jen Abrams, a public policy major, led the crowd in the pledge of allegiance, and Maggie Bridges, a business administration major who also is the current Miss Georgia, sang the national anthem prior to the president’s arrival. While students waited, the Yellow Jacket Marching Band entertained. The landing of Air Force One was aired live from Hartsfield-Jackson International Airport, and students cheered as they caught a glimpse of President Obama before the final leg of his trip to meet them.

Excitement building up to the president’s visit began last Friday when lines of students snaked through campus waiting to procure a ticket for the event. Students waited up to three hours then, with some waiting another six hours Tuesday morning to be the first in line to see the president. They passed the time playing cards and games, reading, and studying.

“It’s a once in a lifetime opportunity,” said Sonika Fitch, a computer engineering major. “I don’t know why anyone would be anywhere else today.”