One afternoon a colleague gave Glotfelter a tiny robot that wasn’t working correctly and asked him to perform some tests. He scooped up the machine, walked out of the lab, and sat down at his desk in the next room.

Suddenly, it roared back to life with no notice, twitching around on its little rubber wheels. Glotfelter hadn’t given it a command or tinkered with its code. 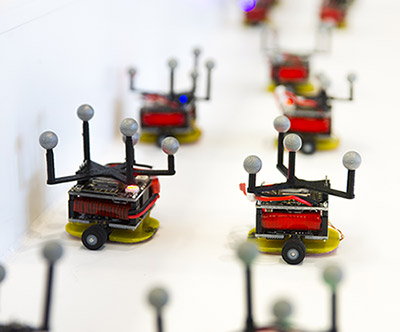 “It seemed to have a mind of its own,” he remembers with a laugh.

“I was new, so I was a bit disturbed and annoyed. I put it on its side to keep it from moving. That’s when things really got confusing.”

Unbeknownst to Glotfelter, his colleagues in the neighboring lab were running an experiment with a swarm of nearly a dozen robots. The server, however, kept referencing an additional machine, trying to move it into the formation.

It took a few minutes before the mystery was solved. “We had a zombie robot on Paul’s desk,” says Egerstedt.

Two years later, Glotfelter is very comfortable with someone else controlling his robots. The rest of the world is now invited.

Take a 360-degree tour of the Robotarium

This month Georgia Tech opens the Robotarium, a $2.5 million lab funded by the National Science Foundation (NSF) and Office of Naval Research.

Get Started
Run your code on real robots

The 725-square-foot facility houses nearly 100 rolling and flying swarm robots that are accessible to anyone.

Researchers from around the globe can write their own computer programs, upload them, then get the results as the Georgia Tech machines carry out the commands. Egerstedt’s team also sends video evidence of the experiment.

Egerstedt says the concept is easy: robots for everyone.

The Robotarium features a large window and seating for live viewing. A safety net protects viewers when flying robots are unleashed.

“We wanted to create a space where anyone, at any time of the day or night, can walk past the lab and see robots in action.”

“Building and maintaining a world-class, multi-robot lab is too expensive for a large number of current and budding roboticists. It creates a steep barrier for entry into our field,” says Egerstedt, the Julian T. Hightower Chair in Systems and Controls and a professor in the School of Electrical and Computer Engineering.

“We need to provide more access in order to continue creating the next generation of robots and robot-assisted technologies. The Robotarium will allow that at an unprecedented scale.”

Video: Lab director Magnus Egerstedt explains how the robotarium got its name and provides a demo of the robots.

No other university has such a facility.

It’s located in the Van Leer Building in the heart of Georgia Tech’s campus. Motion capture cameras cling from the ceiling and peer down at the lab’s centerpiece: a white, bowl-shaped arena that looks like a 12’ x 14’ hockey rink. That’s where up to 80 palm-sized, rolling robots scoot around the surface.

They automatically activate when given a program from someone in the room or a remote coder in a different state or country. Once it finishes the experiment, the swarm autonomously returns to wireless charging slots on the edge of the rink and waits to be activated for its next mission.

The lab is currently set up for the 3-D-printed rolling machines. In a few weeks, autonomous quadcopters the size of small dinner plates will whiz through the air for remote flying experiments (a retractable net will keep them from slamming into walls or people if things unexpectedly get out of control).

“We wanted to create a space where anyone, at any time of the day or night, can walk past the lab and see robots in action. Too many robot labs are hidden away behind closed doors.”

That’s exactly how Egerstedt’s team worked for the last year and a half. They experimented in an unassuming space across campus in Technology Square, using a tabletop version of the Robotarium.

The mini surface allowed them to iron out kinks and identify potential problems with open-access robotics. For instance, what if someone purposely uploaded code that would cause the bots to collide and demolish each other?

“That’s why we created algorithms that wrap a virtual barrier around each machine to prevent collisions,” says Siddharth Mayya, a Ph.D. student in the lab. “We also had to worry about hackers.”

A portion of the NSF grant allowed the team to develop processes that protect the system from cyber threats.

Not everything always went smoothly. Ph.D. student Li Wang once hit a button that sent his swarm of quadcopters shooting toward the ceiling.

Another time, a rolling swarm descended on the same charging station at the same time. The robots literally fought for a spot until they reached the metal rail, which shorted them out and sprayed sparks across the room.

That’s why the Robotarium’s charging stations are now wireless.

So far more than 100 research groups have logged on and used the mini-version.

Most are roboticists without access to swarm technology. Others are biologists. One team chose to use robots, instead of computer simulations, to better understand how ants interact with each other when choosing a new queen.

Egerstedt thinks the new facility will foster more collaboration within the robotics community, allowing scientists and engineers to share their findings more widely and build on successes.

The open access setting will counter the lack of resources that sometime stands in the way of research.

“I want to do for robotics what MOOCs (massive open online courses) have done for education — now anyone who knows how to code can work with robots,” says Egerstedt, who is also the executive director of Georgia Tech’s Institute for Robotics and Intelligent Machines.

He already has a new recruit. This past April, a group of fifth graders stopped in for a tour. Egerstedt saw one of the 10-year-olds stuffing one of the Georgia Tech robots into his pocket while turning to leave.

“I asked him why he took it,” Egerstedt remembers. “He said he wanted to make it better.”

“By adding a flamethrower.”