On September 4, Georgia Tech dedicated a sculpture series commemorating the first three African American matriculants and the first African American graduate of the Institute. Just one year ago, Provost Rafael L. Bras, armed with an idea and funding from Georgia Tech alumnus Francis S. “Bo” Godbold, IE 1965, began to think of a sculpture concept that would bring the journey of the four men to life.

If someone had told Bo Godbold a few years ago that he would be funding major outdoor sculptures at his alma mater, he would probably have laughed. “I don’t have a fine arts bone in my body,” Godbold said.

What he does have are memories and personal experiences with the sculptures’ subjects: the first three African Americans to attend Georgia Tech (known as the Three Pioneers) and the first African American graduate, Ronald L. Yancey, EE 1965.

“At the time, Tech arranged us in classes alphabetically,” and Godbold fortuitously wound up sitting next to Ford C. Greene, one of the pioneers. “At the time, I’m an 18-year-old kid who had always attended segregated public schools in South Carolina, and I thought it was pretty cool that Tech was integrating,” he said.

Tech was one of the first public schools in the Southeast to integrate voluntarily, and, to Godbold, it was a seamless affair. Years later, leading up to and at his 50th Class Reunion, Godbold says he began to question that perception. 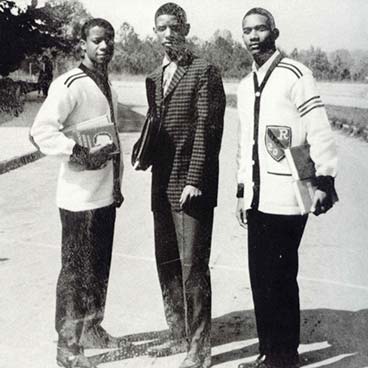 “Talking to Ford Greene and Ron Yancey about what they saw and experienced, I learned that it wasn’t exactly that smooth and seamless. I’ve been asking myself if I would have had the courage to do what they did,” Godbold said. “That sat with me for a while, then I got a notice about the Rosa Parks and Einstein statues Tech was doing — and those are very nice and appropriate — but neither of them had any direct connection to Tech like the Three Pioneers and Ron Yancey did.”

“Georgia Tech and its arts commission took over from there, and they decided on the placement of the sculptures and what they would look like,” Godbold said.

Martin Dawe of Cherrylion Studios was chosen to create the sculptures. Dawe is the Atlanta-based artist who created the Rosa Parks sculpture known as Continuing the Conversation, which was unveiled in Tech’s Harrison Square April 5, 2018. Continuing the Conversation depicts Parks at age 42 in 1955 — the year her courageous act of refusing to give up her seat for a white passenger on a Montgomery bus helped launch the yearlong Montgomery bus boycott — and at the age she died, 92.

“This project was different than Continuing the Conversation,” said Dawe. A graduate of Georgia State University, Dawe apprenticed for eight years with Georgia Tech alumnus, architecture professor, and sculptor Julian Harris before his death in 1987.

“With Rosa, I was the conductor,” Dawe continued. He came up with the idea for Continuing the Conversation years ago and shared it with Provost Bras and then-director of Tech’s Office of the Arts Madison Cario who both felt the piece would be a perfect fit for the campus. “With this project, however, the score was written for me by Bras and Godbold.”

The first step was to talk with the Three Pioneers: Ford C. Greene, Ralph A. Long Jr., and Lawrence M. Williams.

“After talking with them and getting their approval on the whole project, we decided that the iconic photo of the three on their first day on campus would be my starting point,” said Dawe. “I then studied various photos of each of them from that time.”

As the concept discussions continued, Bras offered the idea of an interactive walking sculpture, an inspiration from the Korean War Veterans Memorial in Washington, D.C. 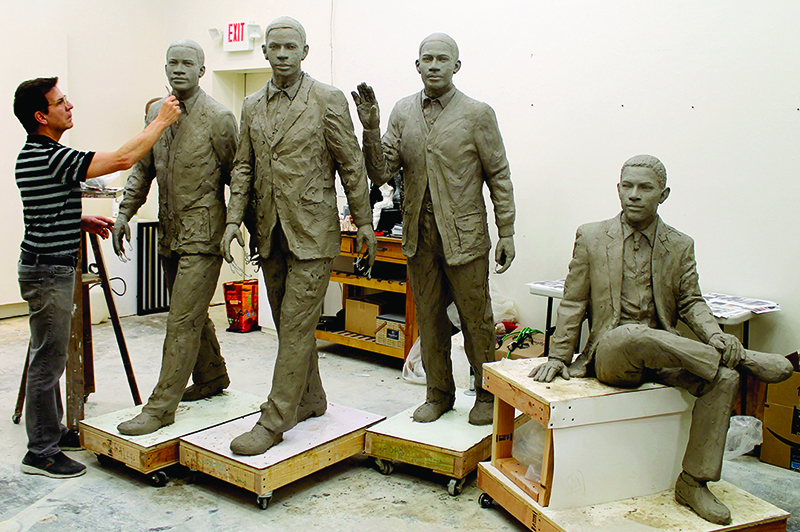 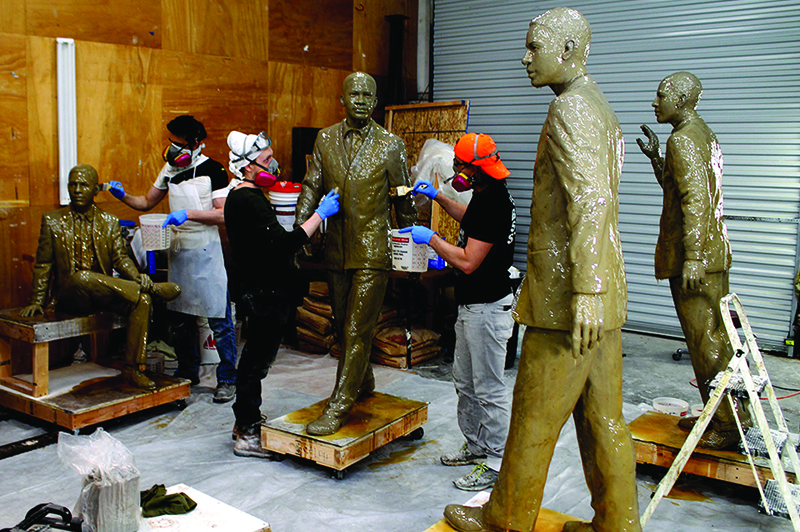 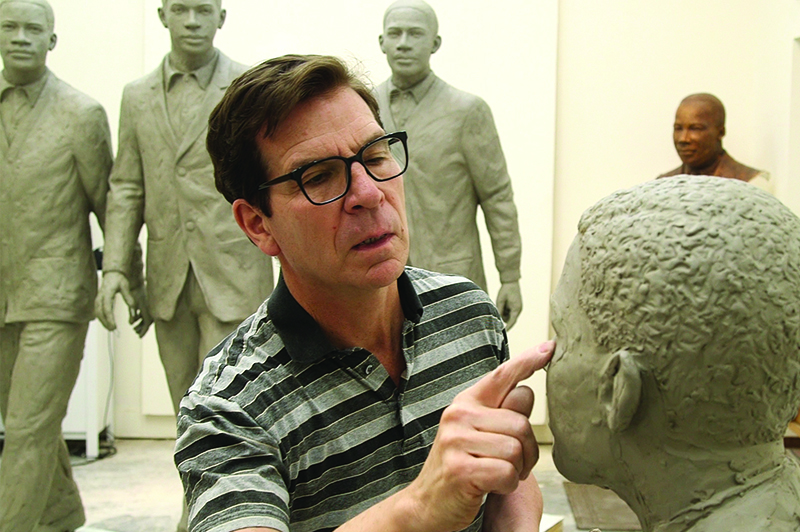 “I really liked the idea of a walking sculpture, which would add a sense of camaraderie to its feel. With this sculpture, they’re all looking off [to their left] and you get this sense that they’re looking at something, but you don’t know if it’s [something] good or bad,” Dawe continued. “For me, that tells a little bit of what they went through on campus — that they had this awareness, a very strong awareness about what was going on around them.”

According to Vice President for Institute Diversity Archie Ervin, “These were three individuals who, though not members who were readily accepted into the community, were very proud to be at Georgia Tech. Even then [their first day on campus] they were wearing their Georgia Tech insignia.”

It was quickly decided that the statue of the Three Pioneers would be placed in Harrison Square, which was named after Edwin D. Harrison, Georgia Tech’s sixth president (1957–69). Campus integration came under Harrison’s watch just one day after he called a meeting of students and ordered that the integration be done peacefully.

Yancey entered Georgia Tech in September 1962, one year after the Three Pioneers and campus integration. He had completed the first two years of his undergraduate degree at Morehouse College, and during those years, he applied repeatedly to Tech, with no answers provided as to why he kept receiving denials — despite excellent grades and test scores. He was eventually accepted but faced isolation and intimidation on campus.

“It was a lonely and difficult time,” said Yancey. “‘Glares and stares’ is the best way I can put it, but I try not to reflect on the negative.”

Though Tech exempted seniors from final exams at the time, Yancey was required to take 18 exams in his five classes during his last three weeks of school. He would prove successful and graduated with a degree in electrical engineering in 1965, becoming the Institute’s first black graduate.

Although Yancey started after the Three Pioneers, Godbold believed it was imperative to include him as a part of the story.

Bringing the Idea to Fruition

With the target of dedicating both statues on campus in September, Dawe and his team immediately went to work on the Yancey statue.

But where would the Yancey piece go? There were almost a dozen locations around campus discussed before the decision was made that it would be installed in the G. Wayne Clough Undergraduate Learning Commons, seated at the bottom of the atrium’s wooden staircase to provide its 1 million yearly visitors with an interactive experience much like Continuing the Conversation.

“The bronze pieces take at least four months to complete: a month to complete the molds, and then they spend about three months at the Baer Bronze Fine Art Foundry in Springville, Utah,” said Dawe.

At the foundry, the sculpture is then bronzed, welded, and sandblasted. The final stage of the process is patina — the coloration of the bronze brought about by the oxidation of the metal surface. This is achieved by applying various chemicals and finishes to the surface of the bronze until the desired color effect is reached. For both The Three Pioneers and The First Graduate, Dawe decided on an ombré effect from top to bottom.

“What I hope is that as the community interacts with these pieces — either walking or sitting next to them — that their interaction will become natural. They’re reminders of how far we have come. They’re also reminders that we still have a way to go,” said Bras. “The other part of the lesson that I hope doesn’t escape people is the reality that these young men must have lived through very difficult times.”

For Godbold, too, that was a key reason for wanting to fund the sculptures. Apart from being motivated to honor the courage of the four subjects, he also wanted to ensure that current and future campus communities have a true understanding of the significance of the experiences of Greene, Long, Williams, and Yancey. “I don’t know if 18-year-olds today understand the importance — or what things were like in the 1960s,” he said. “I don’t know if we appreciated the significance of what was occurring at the time.”

Greene studied chemical engineering at Georgia Tech. He completed his bachelor’s degree in mathematics and computer science at Morgan State University and led a successful career in telecommunications and information technology systems.

After attending Georgia Tech, Long completed his bachelor’s degree at Clark College (now Clark Atlanta University) in mathematics and physics, and would go on to become the first African American systems engineer for the Large Systems Group in the southeastern U.S. at IBM Atlanta.

Williams was drafted into the Air Force and served honorably in the Vietnam War, earning several distinctions and honors.

One week after graduating from Tech, Yancey moved to the Washington, D.C. area. He went on to have a successful career with the Department of Defense and has served on the Georgia Tech Alumni Association Board of Trustees.

Godbold, who attended Tech on a full need-based scholarship, graduated in 1965. He later graduated from Harvard Business School and immediately joined Raymond James Financial, where he enjoyed a successful career spanning more than five decades. He and his wife, Betsy, focus much of their support on need-based scholarships to ensure educational access for students of modest means.

The four men were recognized at the Institute’s 11th annual Diversity Symposium, "Georgia Tech’s Racial Diversity Journey: Recognizing Our Past, Acknowledging Our Present, and Charting Our Future," on September 4 when both sculptures were also unveiled and dedicated in their honor at Trailblazers: the Struggle and the Promise in Harrison Square.