The Grand Opening of the EcoCommons

At the corner of Hemphill Avenue and Ferst Drive sits a lush, green, 8-acre treasure — a study in ecological sustainability, innovative pedagogy, and individual contemplation.

Known as the EcoCommons, the space is a far cry from the dated Beringause Building and surface parking lots that once occupied the area. It is a portion of 80 acres of greenspace throughout Georgia Tech’s campus that follow the original naturally occurring stream paths of this region before urbanization. These revitalized greenspaces are designed and engineered to reduce stormwater runoff while also supporting increased biodiversity and living-learning laboratories on campus. Within the most recently completed 8 acres of the EcoCommons are three distinct programmed areas — an area to engage, an area to learn, and an area to reflect.

Georgia Tech President Ángel Cabrera is already a frequent visitor. “In the Institute’s new strategic plan, we pledge to lead and inspire by example — to become a model of efficiency, sustainability, ethics, equity, and inclusion through deliberate innovation in all our practices,” he said. “The EcoCommons beautifully showcases each of these values.” 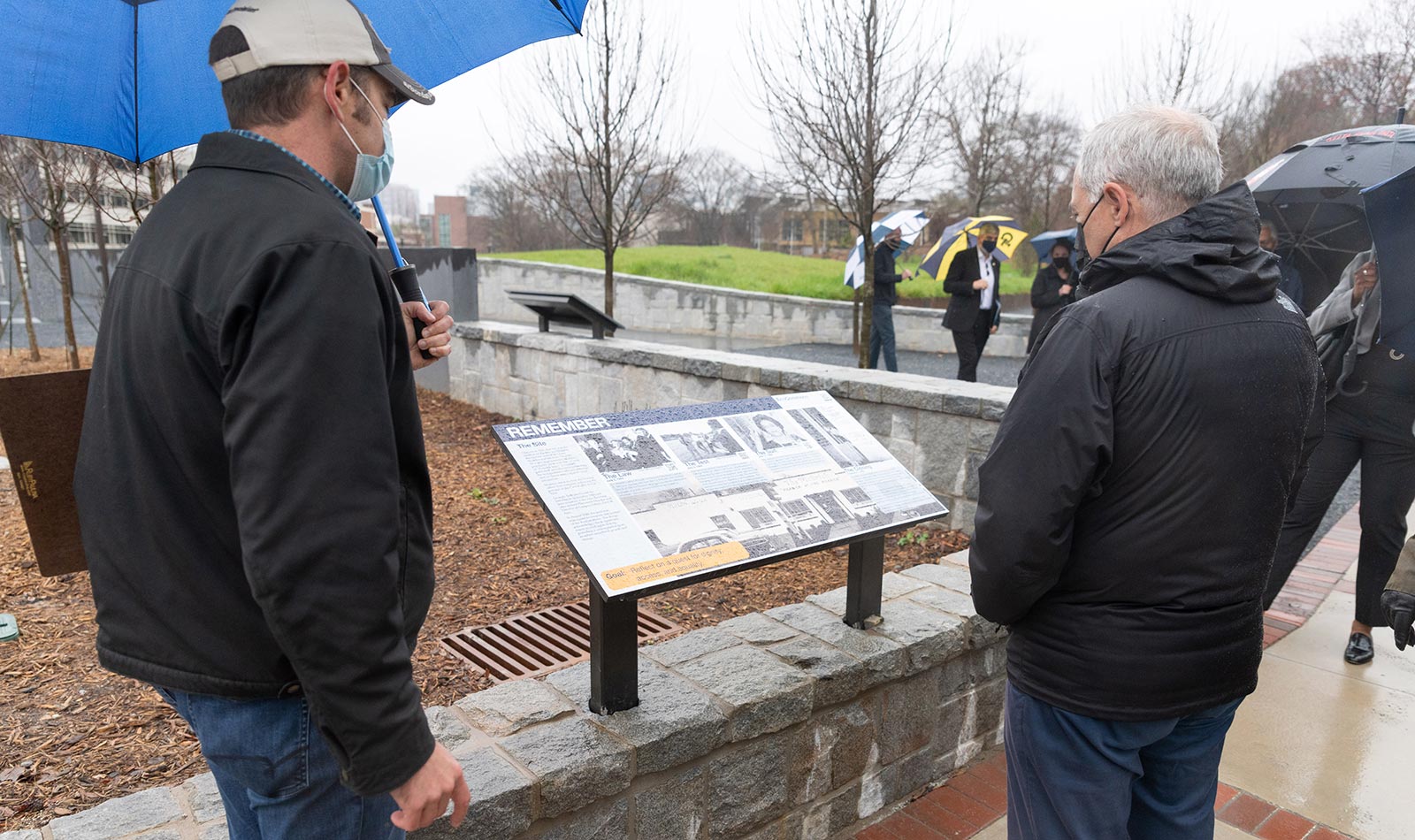 Jason Gregory, senior planner in Capital Planning and Space Management, talks with President Ángel Cabrera during a tour of the EcoCommons in March. Photo by Rob Felt.

In recreating the original Piedmont woodland that previously existed on the site, the first step after demolition of Beringause and parking lots was extensive soil amendment. Several tons of compost, pine bark, elemental sulfur, and new soil were added to improve existing conditions and allow plants to thrive. Significant grading of the area preceded the planting of more than 600 new trees, 68 transplanted trees, tens of thousands of new perennials and shrubs, and an abundance of ferns and grasses. Several specimen trees (those with high historic or ecological value) were preserved and anchor the eight diverse planting zones: forest, woodland, wetland, meadow, grove, prairie, lawn, and granite outcropping. As this complex landscape matures, the EcoCommons will delight in every season.

The Stickworks art installation, Chip Off the Ole Block, by renowned nature artist Patrick Dougherty, beckons visitors to enter and investigate the woven sapling fortress perched atop the granite outcropping near The Kendeda Building for Innovative Sustainable Design. The sculpture, constructed with the help of over 100 volunteers from the campus community, will remain in place with minimal maintenance for at least two years. A flat, grassy area adjacent to the sculpture is an ideal spot for a picnic and a panoramic view of the landscape. The most anticipated element of the EcoCommons design, three stainless steel play slides, were recently installed among the granite boulders. The design encourages purposeful engagement with the landscape, supporting Georgia Tech’s commitment to fostering well-being for all community members. 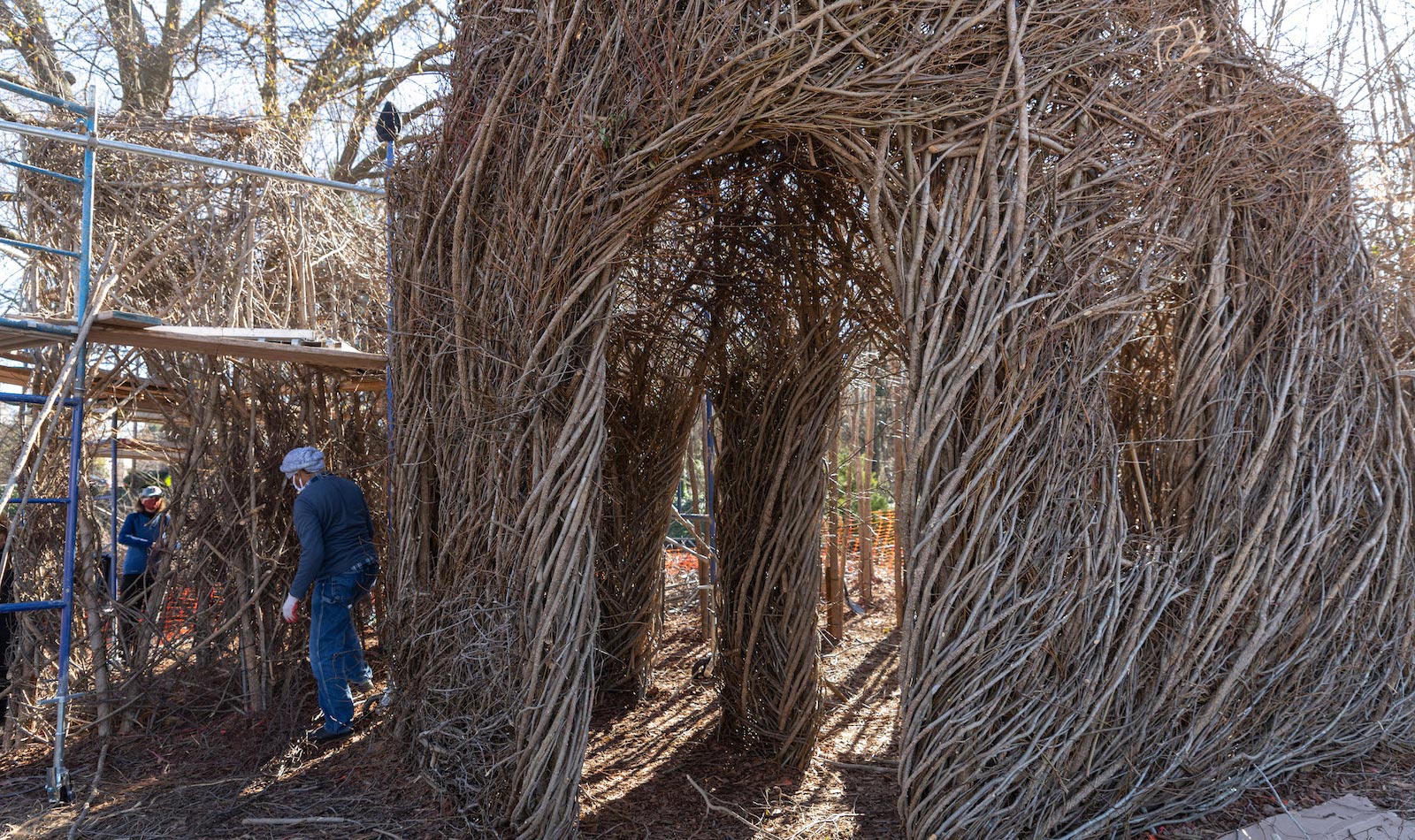 The Stickworks art installation, Chip Off the Ole Block, by renowned nature artist Patrick Dougherty, was installed in January. Photo by Rob Felt.

Weaving throughout the area are pervious pathways, wooden bridges, and natural trails that will encourage a relaxing walk between classes and meetings. Near the Dalney Building is a large bioswale, capable of holding 500,000 gallons of water before releasing any of it back into the city’s water system. This large channel is designed to convey stormwater runoff while removing debris and pollution. A covered learning platform overlooks this seepage wetland and provides unique vantage points for observing this smart and effective design for water stewardship. New Jersey tea, bull sedge, and soft rush grass are a few of the many plants in this area. The opportunity to observe and interact with this sustainable process for protecting nature’s resources make this a popular spot for faculty and students. 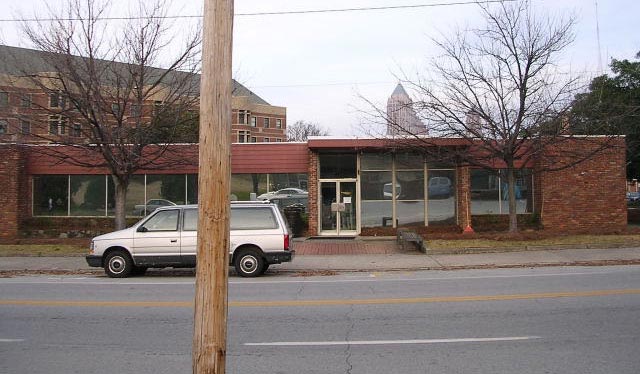 In 1948, Lester Maddox, who would later become Georgia’s 75th governor, opened his Pickrick Restaurant on this spot. After the passage of the 1964 Civil Rights Act, Maddox, a staunch segregationist, famously prevented three Black theology students — George Willis Jr., Albert Dunn, and Woodrow T. Lewis — from entering his restaurant by threatening them with a handgun and pickaxe handles. The students hired Black attorney Constance Baker Motley and filed the first federal lawsuit under the Civil Rights Act. Maddox lost the case. Rather than comply with the court order to desegregate, he closed the restaurant. Motley would later become the first Black woman appointed as a federal judge. Georgia Tech purchased the former Pickrick building soon after. Known as the Fred W. Ajax Building, it was part of the Tech campus for more than 40 years, serving first as a job placement center and later as a storage facility for the Georgia Tech Police Department. The building was leveled in 2008, and a historical marker stood on the site for years.

As you approach this section of the EcoCommons, known as the contemplative grove, the pathway follows a granite seat wall. The landscape design now serves a symbolic as well as ecological purpose. As the path narrows, three openings in the wall appear. Just beyond each opening, you will see that a piece of the wall has been pushed back. Representing both obstacle and door, these pieces of the wall are each directly in line with a longleaf pine tree (the only longleaf pines within the EcoCommons), symbolizing the three courageous men who broke through the walls of injustice. Three large wooden benches encourage moments of reflection and conversation about how far we have come in advancing racial equality, and how far we still have to go. The footprint of the Pickrick is outlined in the ground by a raised steel edge and the interior is planted with a subtle groundcover. The vegetation is in direct contrast to the dense woodland that surrounds the Pickrick site. An updated educational sign will be installed to explain the events that occurred here almost 60 years ago. 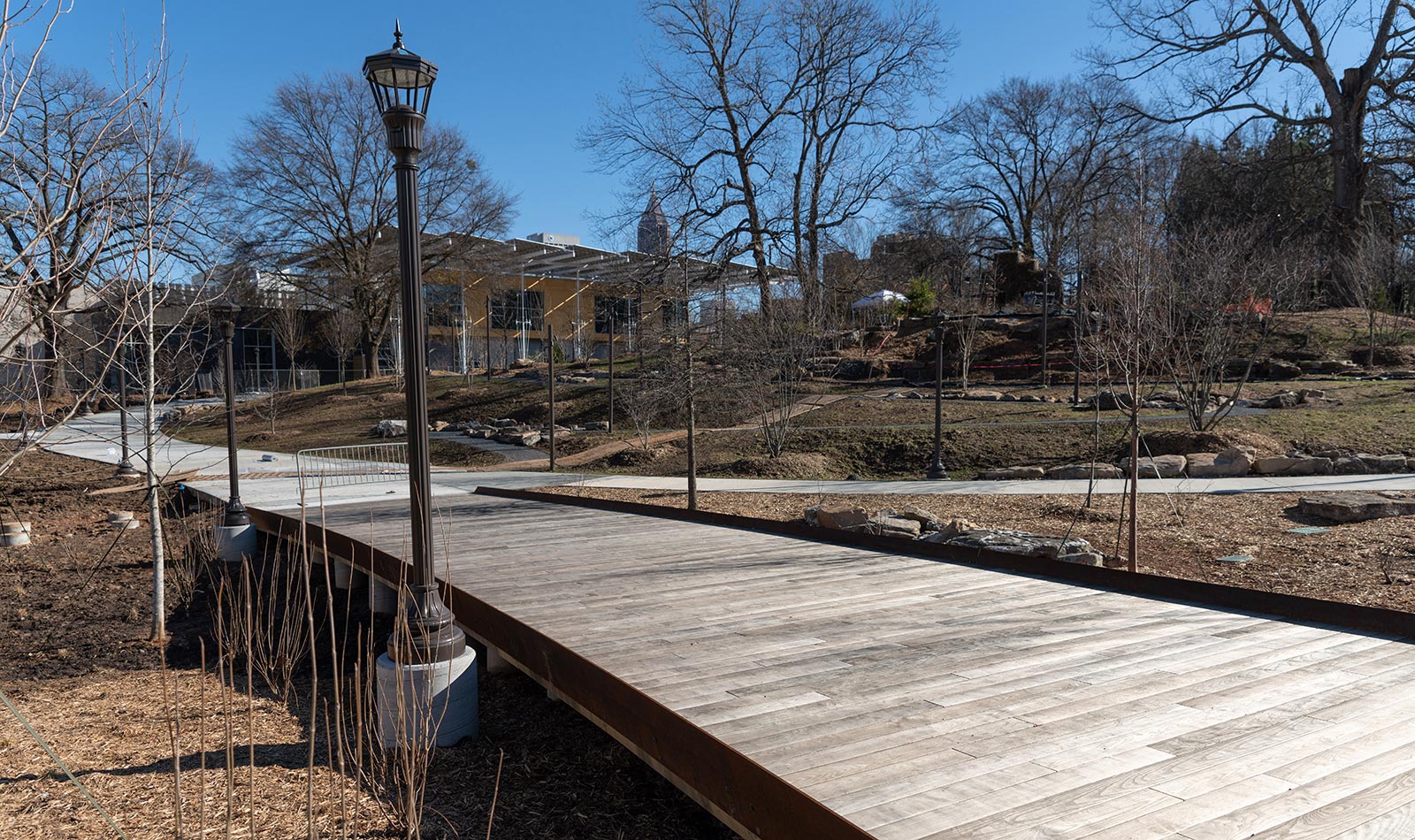 A view of the EcoCommons from north of The Kendeda Building for Innovative Sustainable Design. Photo by Rob Felt.

Adjacent to the contemplative grove is a raised circular meadow of prairie grasses surrounded by hammocks, bistro tables, and chairs. Two small yellow flags rise above the grass next to what looks like a small solar panel. While students may choose to relax in this area, the landscape itself is working —constantly studying the environment and transmitting data via sensors and meters placed throughout the entire EcoCommons. More than 20 devices are installed either in the ground or attached to light poles and all are connected to the LORA-WAN (Long Range Wide Area Network) Internet of Things (IoT), a networking protocol wirelessly connecting battery-operated “things” to the internet. These sensors will measure air temperature and humidity, wind speed and direction, barometric pressure, carbon dioxide levels, soil moisture, and water depth/pressure. 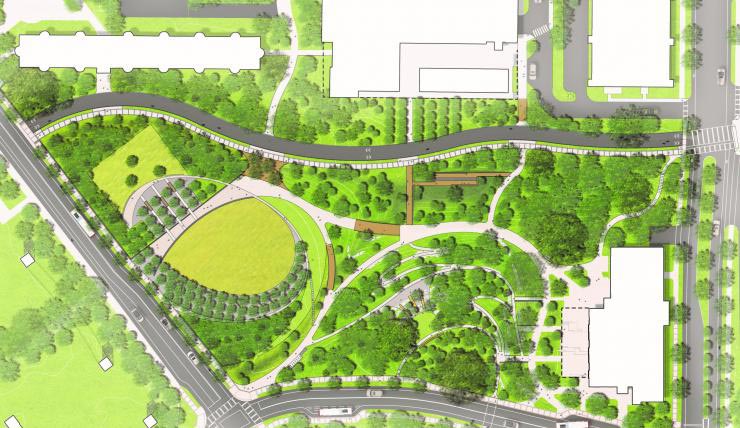 An aerial rendering of the EcoCommons design.

To determine these data categories, a project planning committee invited individuals from the Georgia Tech research and academic communities to participate in a stakeholder focus group. Through online surveys and personal interviews, the project parameters were established, and facilities business analysts monitor the data. Information is collected every 30 minutes from each sensor and the data is stored on a server managed by the Georgia Tech Research Network Operations Center. This ecological data will be available to students, researchers, and campus operators beginning in May.

The EcoCommons is the result of years of planning and design, a collaborative effort between Capital Planning and Space Management and Facilities Design and Construction. It supports Georgia Tech’s commitment to the health and well-being of its campus inhabitants, serves as a performance landscape in support of responsible stewardship, and honors its history while pointing the way to a sustainable future.

360-degree view of the EcoCommons. Photo by Brice Zimmerman. 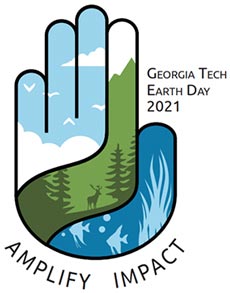 The 2021 Earth Day celebration will span a full week on campus. Enjoy both in-person and virtual events, including an EcoCommons tour, bird tour, a clothing swap, and more. View a full list of events for the week.